Or the weight of being Worthy in Thor #1
by Jason Aaron, Russell Dauterman, and Matt Wilson; Marvel Comics 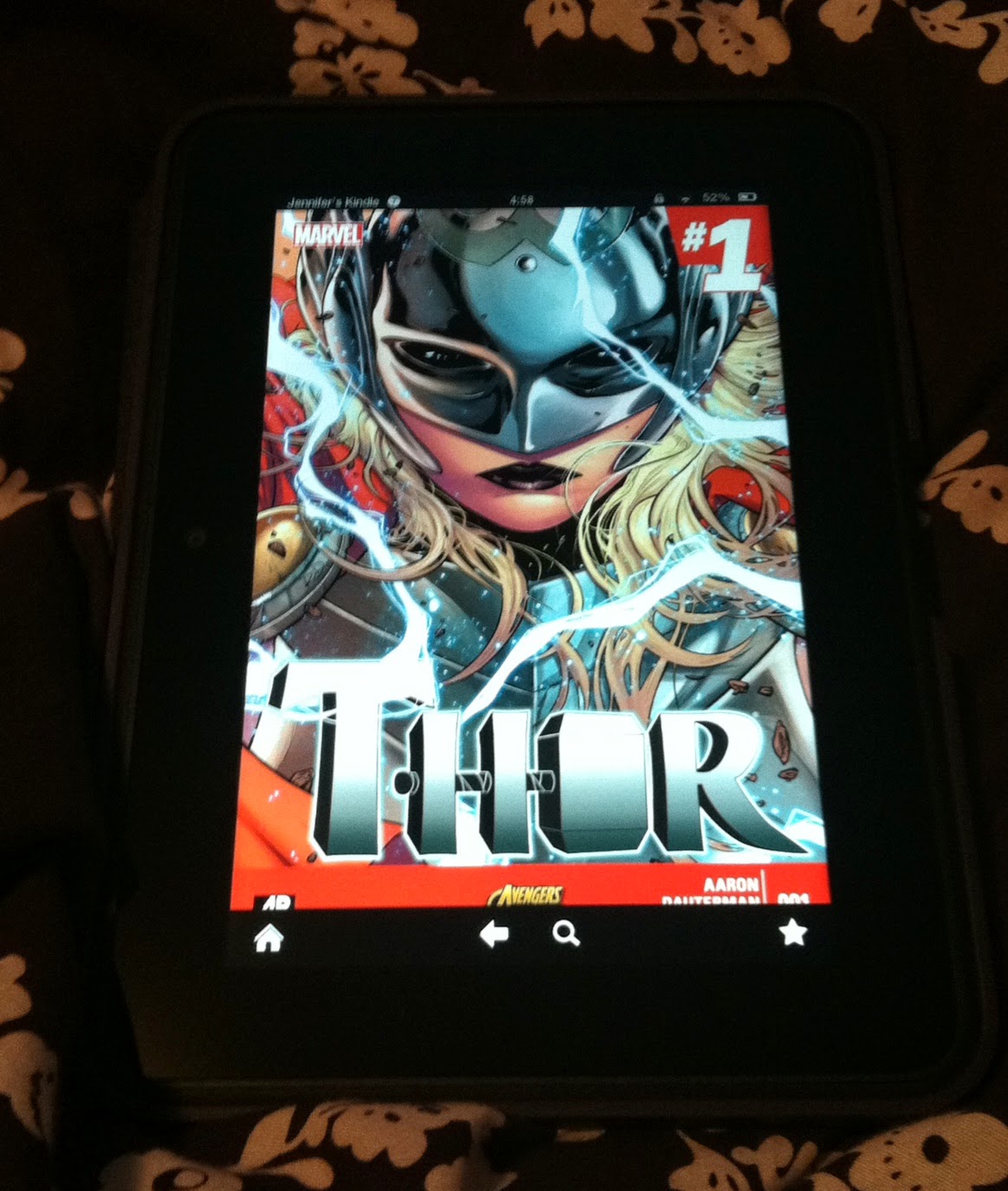 I have, for quite some time now, had a thing for Thor.

It’s not as intense as my Carol Danvers Situation (Carol is, without a doubt, my all time favorite comic character, and my love for her knows no end), but there is most definitely a place in my heart for the big, blonde, Norse God of Thunder. I have found something very meaningful in the story of someone who takes on the duty of caring for people that those around him don’t see as worthy of his attention or effort. Thor is smarter than many fans give him credit for, and is frequently struggling to maintain his own humility. He works with and respects a diverse range of beings, in which he appreciates a range of strengths and weaknesses. He is, often, bolstered and strengthened by his ability to wield Mjolnir, proving his worthiness to not just those around him, but also to himself.

So the announcement this summer that a woman would take up the title, powers, and hammer of Thor absolutely floored me. With the aid of Comixology and my public library, I caught up on the entirety of Jason Aaron’s Thor: God of Thunder in the weeks surrounding San Diego Comic-Con this year, where I was also floored to have a Thor title discussed in the Women of Marvel panel. And now, here we are, arrived at issue number one of a new title, a book for which I was so excited I jumped on Comixology to read it today, even though I know it will be in my box when I visit my comic book store next week.

So how was it?

*SPOILERS* ahead, so turn back now if you’d like to read the issue yourself before reading my take on it.

The issue it self is actually really solid—the story moves at a great pace, giving us multiple actions and characters with which to focus, from Malekith and his suspicious and villainous behavior in the Ocean, to Freya and Odin’s extended argument about who is really in charge of Asgardia (which I quite enjoyed), and the struggle of Thor Odinson, who suddenly is dealing with the reality of being unworthy.

The mere idea that he can’t lift Mjolnir has broken part of him. We see him lying despondent on the ground near his immovable hammer. He’s devastated by the effects of whatever it was that Fury whispered to him—that something as small as another man’s whisper could strip him of his worthiness. 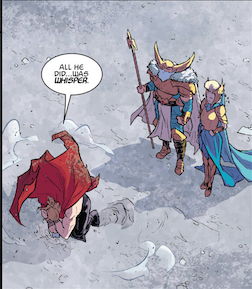 Throughout the issue—and I suspect this will be true throughout the title as well—there is quite the commentary about the meaning of worthiness—none of the Asgardians can lift the hammer, not even Odin, who first enchanted it. 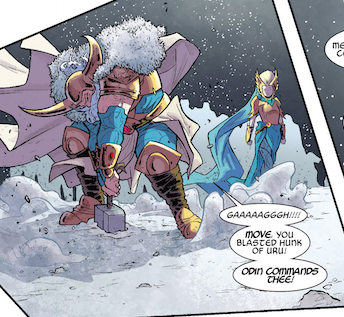 At one point, Volstagg suggest that this may indicate there is something wrong with Mjolnir. 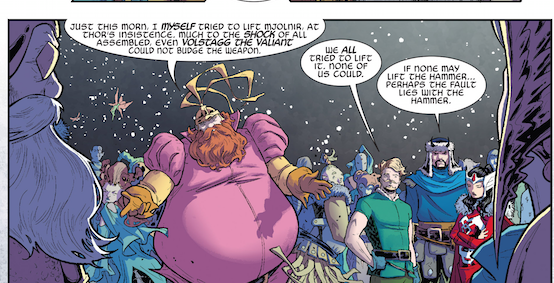 But it remains to be seen—according to Mjolnir, none of the Asgardians are worthy.

Thor Odinson moves off to fight Malekith in another way, riding a goat (ram?) into the sea and wielding an axe, much like we’ve seen in flashbacks to young Thor early in the God of Thunder run, Mjolnir remains on the moon where it was dropped, and Odin and the Asgardians return to Asgardia, with Odin telling Freyja the time of the All-Mother has come to the end with his return. 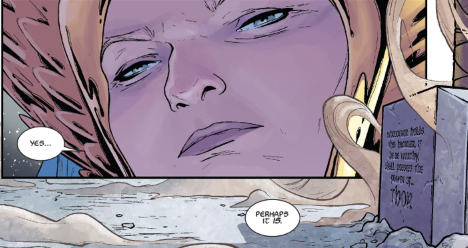 In the last two pages of the issue, we meet our new Goddess of Thunder.

Though I felt it was very heavily implied that Thor is Freyja (which I can totally get behind), with some googling and reading, it appears that Jason Aaron intends our new Goddess of Thunder’s identity to remain a mystery for a few issues.  So here’s what I have to say about her already: I think I may be in love. 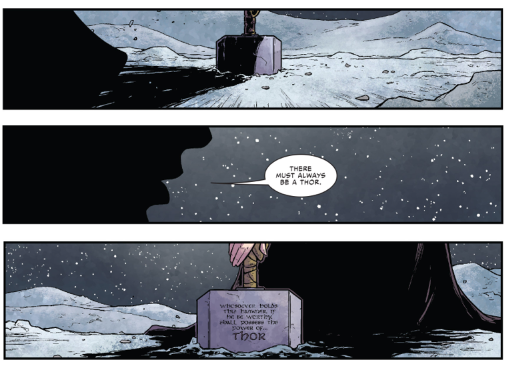 Our mystery Thor picks up the hammer with full confidence that she will lift it. She knows she is worthy; she is not asking Mjolnir to judge her as such.

There is already a message worth holding onto here—we can define who we are. In the letters column at the end of this issue, Jason Aaron responds to two people. The first expresses distaste with the direction Thor is taking, insisting that while they are a “big Thor fan”, they may be leaving comics behind in response to this  “obvious gimmick.” It’s one way to respond to a new iteration of a hero, but as Aaron points out in his response, the mantle of Thor has already passed between multiple characters, who all had to figure out what it meant to be the God of Thunder.

“The Hammer of Thor has always come with a certain inscription,” Aaron responds, “one that makes a very specific promise. The promise of transformation.” 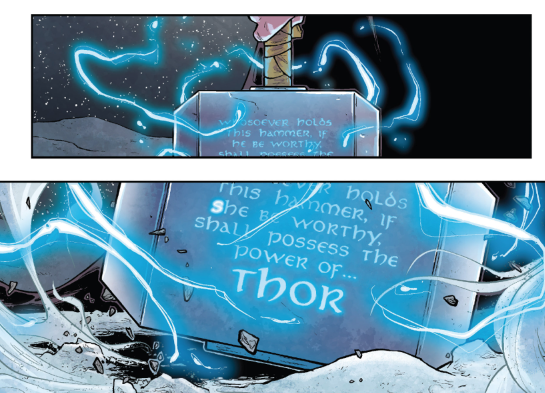 I believe the story being set up is one very much about transformation and how we define ourselves. Thor Odinson has to figure out who he is without his name, without his hammer, and without the idea that he is worthy to be the God of Thunder. Our new Thor will have to prove herself as well—Odinson leaves some large shoes to fill, and she will undoubtedly come up against those that doubt her ability to do so. Will she continue to believe herself worthy and capable through this? What about her story is going to be new and exciting in the evolving mythos of Thor? I’m eager to find out.

The second person Aaron responds to is excited about the idea of a new female Thor. She has thought of Thor as her hero, someone admirable and inspiring. Thor’s story has clearly been a source of comfort for her.

There is something so powerful about being able to see yourself in your hero. “For the first time I feel like everything will be okay,” she writes. “I feel like I can dust myself off, pick up my hammer, and face the world.” This is the power that representation can have—with a female Thor, suddenly it feels a little less crazy that we could all be Thor, and be inspired by the loyalty, wisdom, and strength that have become synonymous with the character. This story of transformation means something important to our characters, yes, but it can also have meaning for those reading this story.

Thor #1 is solid opening act, and I am so very excited to see where the story, and our hero, goes.

Post by Jennifer DePrey
Posted by Michael Bround at 08:00