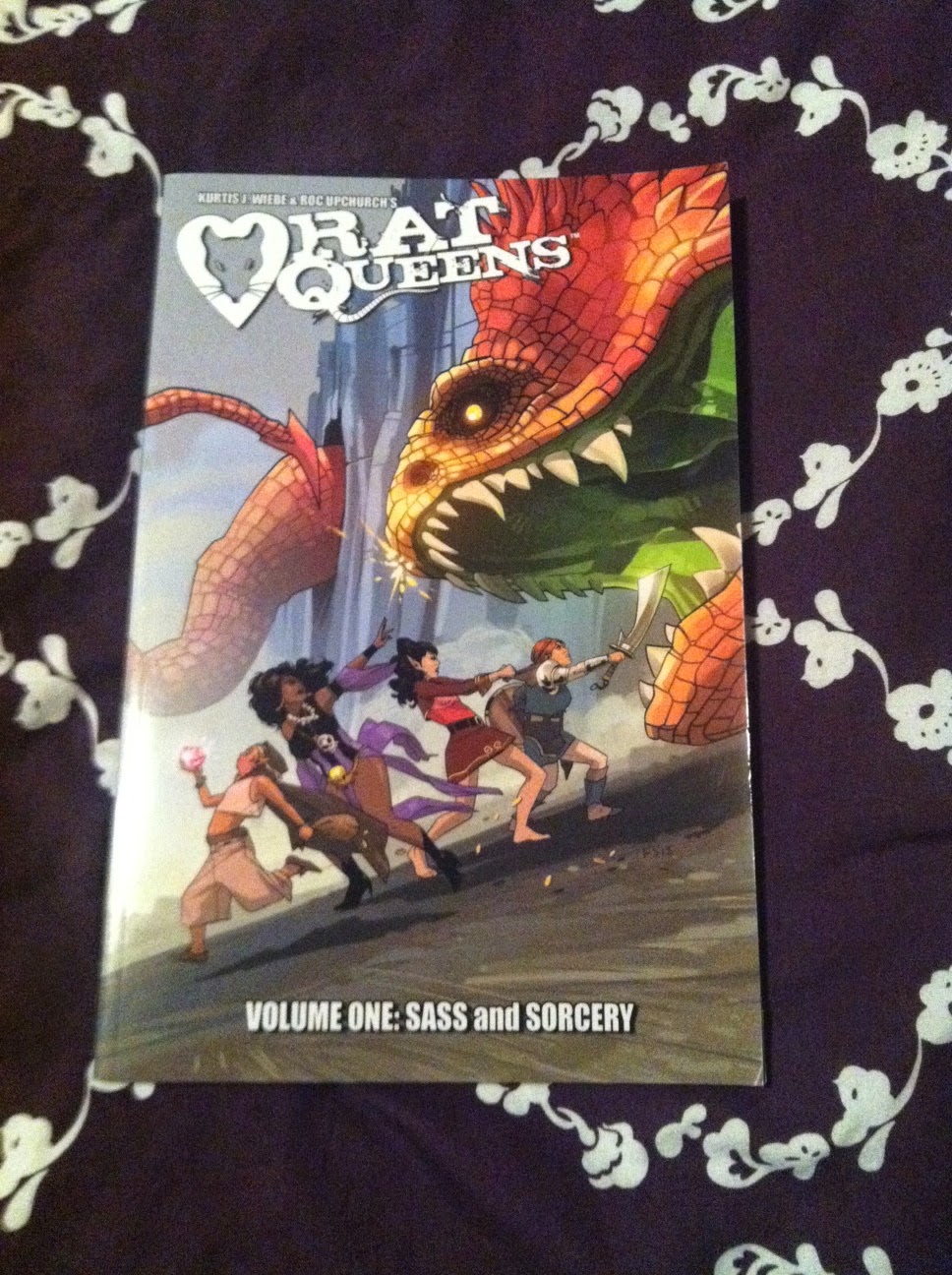 Rat Queens is a title that was recommended to me by a number of comic-reading friends well before I ever considered picking up an issue. Their enthusiastic, shouted recommendations had me picking up a copy during a sale at my favorite store, where even the owner ringing up my purchase said to me “Call us when you finish that, you’re going to want more.” I devoured Rat Queens over the course of 2 days, and by the end of the trade I was mad at myself because this book was so great and I wasn’t already reading it.

Rat Queens Vol 1 Feels like an amorphous combination of straight up paperback fantasy adventure story and what I think of as trashy “chick lit”—the sort of book that I read for pure enjoyment, with no goal of educational or literary enrichment (This is not a bad thing—reading is sometimes quite legitimately about escapism). The story of Rat Queens is well-versed and grounded in the tradition of fantasy/adventure tales, but so fun and funny that it feels like it should be a guilty pleasure. It’s also unapologetically foul-mouthed and bloody, which I appreciate from my fantasy tales.

This book is straight-up fun to read.

But if you haven’t read it, assume some mild *SPOILERS* below. 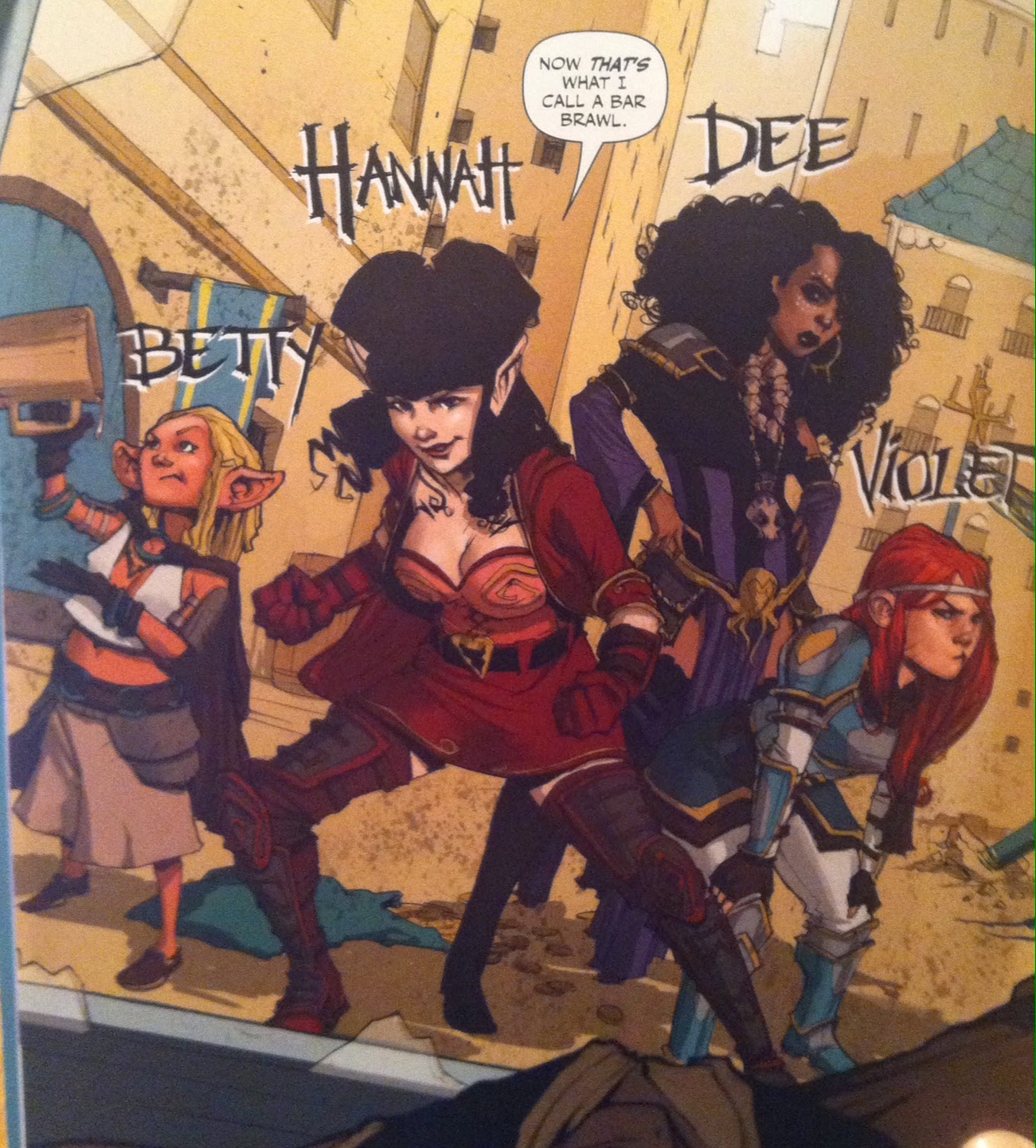 This book had been described to me by numerous friends as a fantasy story if fantasy stories happened with the same dialogue as a Dungeons and Dragons campaign.  As I read through it, I was surprised with how accurate this description was—I had heard this said about the book so many times that I kept expecting to turn the page and be confronted with the tabletop game controlling the Rat Queens, but it never happened.

Rat Queens is almost the antithesis of trying too hard—the book flows, with casual dialogue, a quick-paced and easy to follow plot, and characters that are entertaining and relatable, while remaining interesting. In all of the best ways, reading Rat Queens fells akin to watching a well-done sitcom—I’m laughing, I care about the characters, and I want to keep exploring more.

Wiebe and Upchurch do a fantastic job balancing this fun style with the hallmarks of a fantasy tale. Our heroines fight, swear, revel, drink, and fight some more.  The embark upon a quest, encounter a mystery, and must work together with people and groups outside of their own to confront a problem. For all that the story arc feels almost comfortingly familiar to this long time fantasy reader, Rat Queens is a breath of fresh air. The Queens are self-aware enough to give credit to others for great lines said in battle, or mock fantasy-world stereotypes, such as the good sight of elves, embracing the best fantasy tropes without feeling weighted down by them. 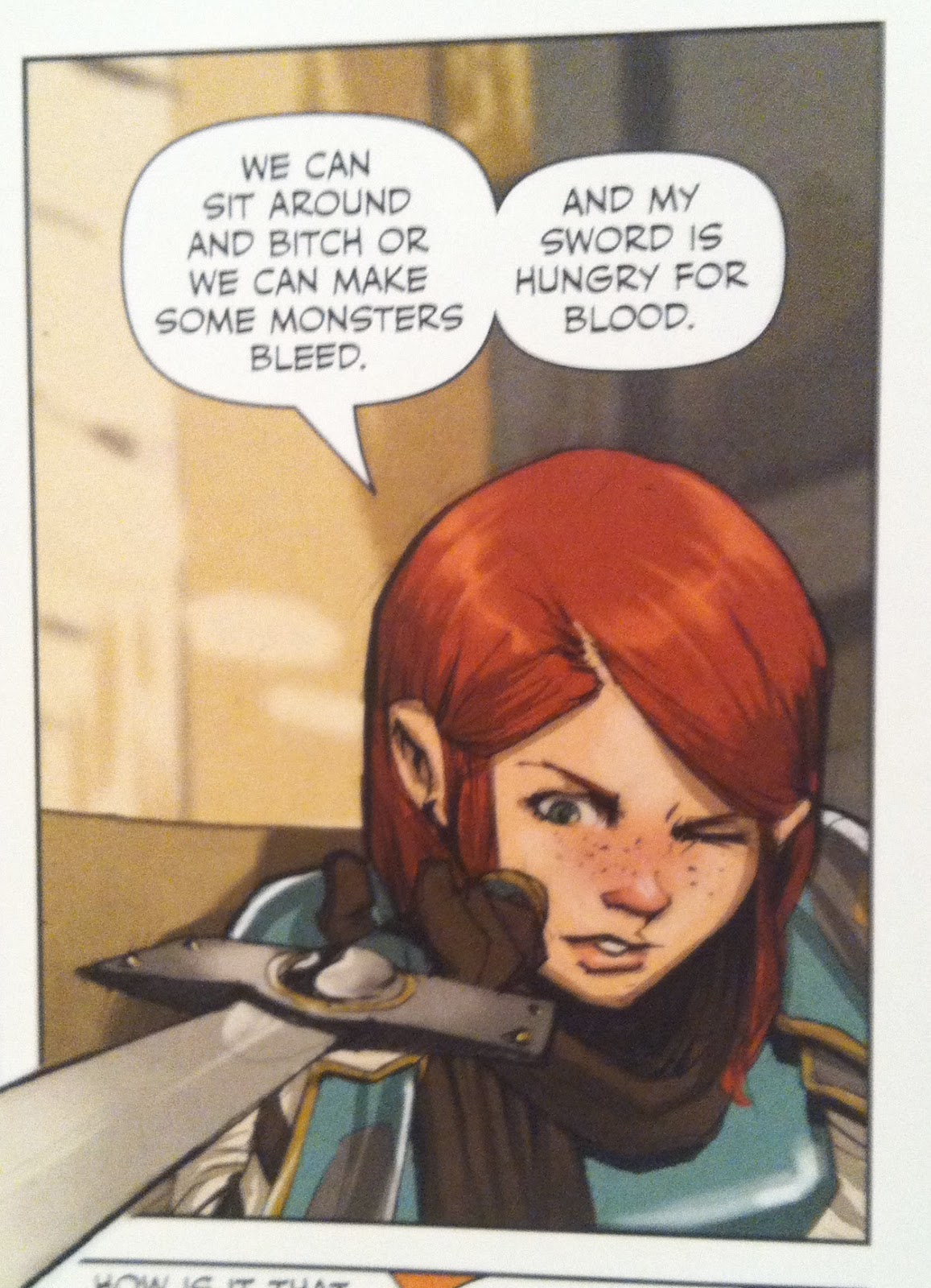 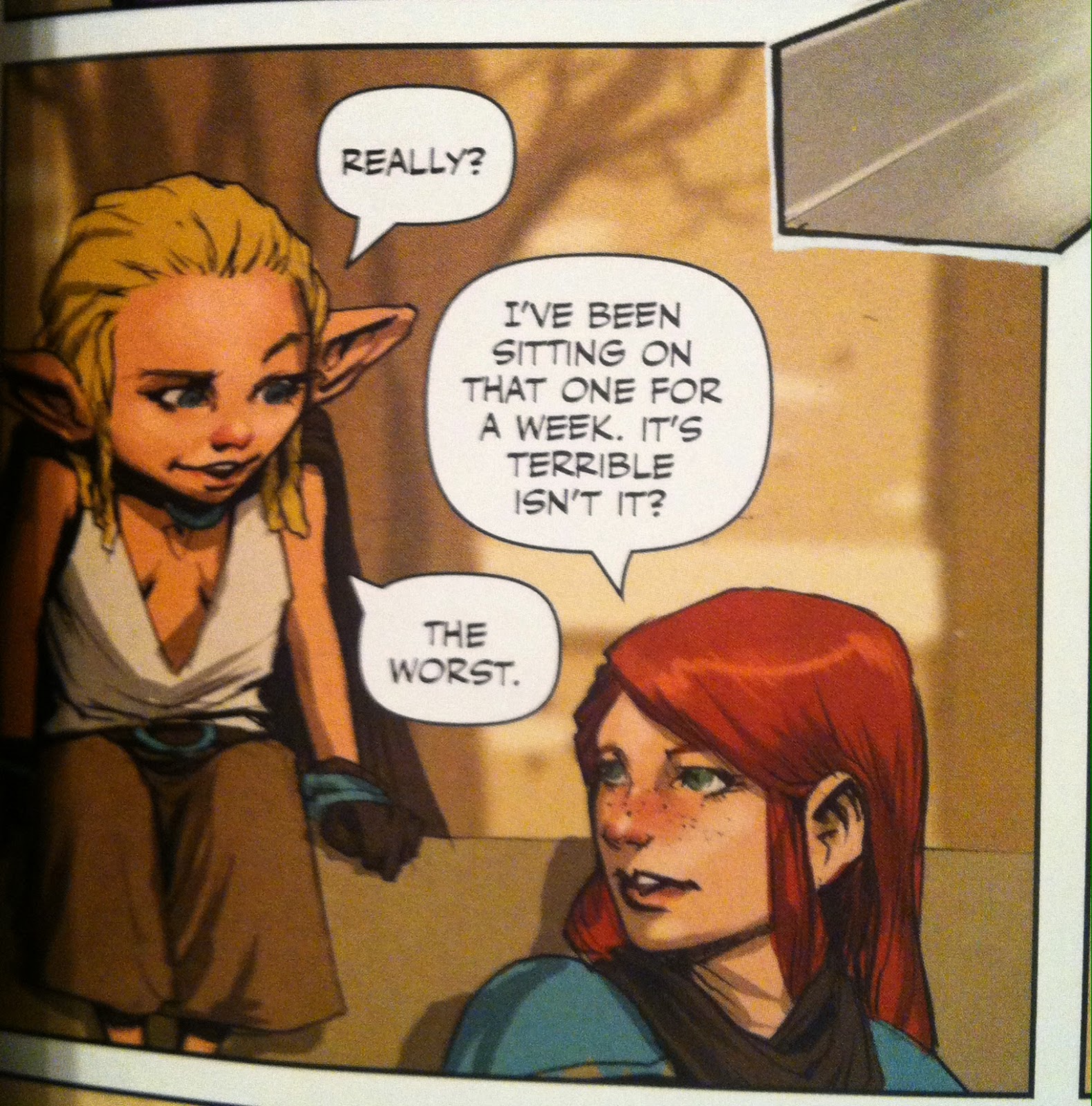 One of the things Rat Queens does incredibly well is the causal, free dialogue, peppered with a large number of jokes. The choice to use modern language and slang is one of the elements of the story that had me flipping pages and rooting for our characters – If I was fighting monsters, my vocabulary would be much closer to that of the Queens than of those fantasy novels I grew up on. The Rat Queens and company are foul-mouthed in the way you would expect a person to be when faced with an army of trolls. 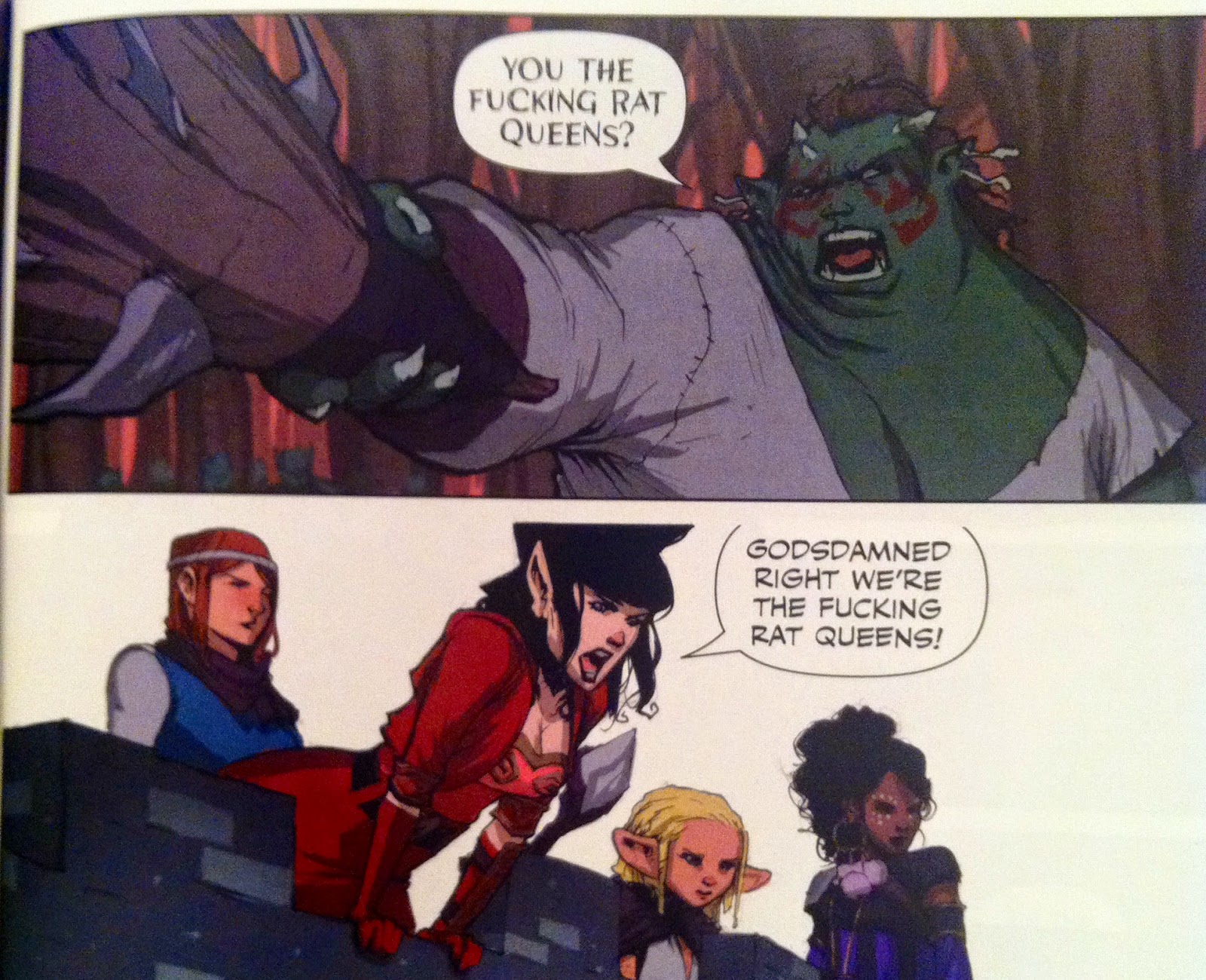 The interesting supporting characters also play into my enjoyment of this story – The Rat Queens themselves are interesting and becoming more and  more multifaceted as the story goes  on, but I’m just as charmed by the Sawyer, the captain of the guard, by the other bands of adventures (The Four Daves make me smile all the way through), and even by the band of trolls the Queens eventually fight. I want to know more about our main quartet of heroes, but I also really want to spend more time with these awesome supporting characters. 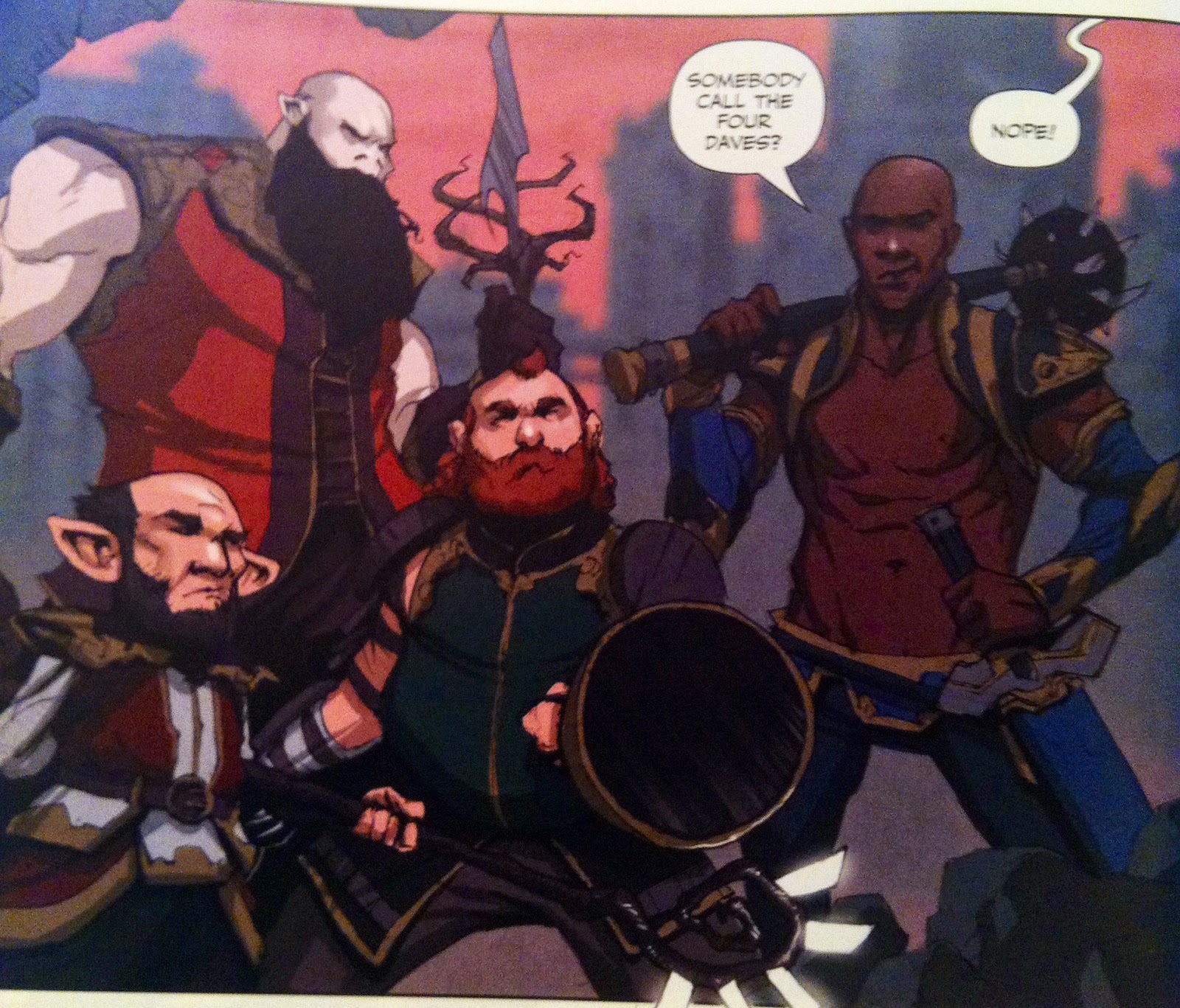 Wiebe and Upchurch should also get some real credit for a book with consistently diverse representation. I noticed this immediately with our four main characters, women of different body types and ethnicity, but as I read I also noticed it in the background—the setting is populated by characters with a range of skin colors and body types. We also see some representation of diverse sexual orientation and religious beliefs and ideologies, though this is a harder type of diversity to represent in a visual medium. I did find that occasionally this can feel a bit forced—Dee and Betty talking about Dee’s religious beliefs while working to infiltrate a guild office comes to mind – but intent is there, and the heart of the story is in the right place.

Rat Queens will be staying on my list as a book I follow in trades. Volume One is a solid opening arc, a full story that leaves tendrils of further story to be explored in future installments. I want to know more about the characters, sure, but more than anything else, I want to spend more time in the world Wiebe & Upchurch have created—a diverse fantasyland populated by foul-mouthed, bad-ass adventurers. There is always space in my life for a read that gets me turning pages and leaves me smiling. I’ve already begun to shout my own loud, enthusiastic recommendations at friends.

Previously:
So I Read Rat Queens