You Don’t Love Me Yet Is A Good Book 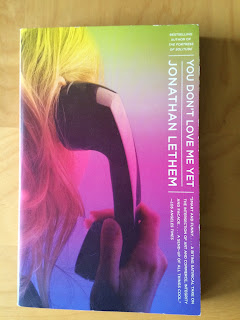 You Don’t Love Me Yet is a novel about a nameless band struggling in obscurity to find their breakthrough success. The band is made of Matthew, a charismatic and handsome singer who is deeply upset about a sick kangaroo at the zoo her works at, Denise, a practical, professional drummer who works in an LA sex shop, Bedwin, a talented writer and musician with a fragile temperament, and Lucinda Hoekke, a passionate bassist looking for a day job. In an effort to make a living Lucinda takes a job working in her friends art piece as a phone operator listening to strangers complaints. Lucinda finds herself ensnared by the complexity of one callers compelling complaints and bringing them to her band, uses them to craft incredible new songs. But now, finally on the edge of success, Lucinda finds herself infatuated with her special Complainer who knows whats she’s done and wants in.

You Don’t Love Me Yet is a pretty weird, fun, and engrossing read. It has a wonderfully playful tone and weird aesthetic that vacillates between inane humour and a kind of precious, cerebral depth that makes for a compelling read. It’s a novel made out of a bassline, the energy that exists between the gleeful vulgarity of an over-the-top guitar solo and the mechanical discipline of a drummers craft. It’s a bit like an erection, all bloated and hard and eager, a finel honed sex machine developed by millennia of evolution, but also, you know, a hilarious rubbery prong. It’s the kind of novel that makes a person want to write sentences like that.

You don’t love Me Yet is also a novel with some thematic heavy lifting going on. It’s a bit nebulous, but if I had to take a stab at it, I’d say it’s a novel about creativity and being an artist. In some ways, I think you could argue that the nameless band in the novel is a stand in for the facets of an artist. Bedwin is the brilliant, broken introvert who represents the alien talent that makes art happen. Denise is the dedicated work ethic that is needed to actually make art. Matthew is the charismatic sense of cool needed to be the face of artwork. Lucinda is the wildcard sense of perverse passion that is maybe the embodiement of the “midnight disease” LINKLINKLINK at the heart of a lot of talent. The Complainer is maybe a sense of greed or commercial success that drives and weighs on the creative process. If viewed from this lens, You Don’t Love Me Yet is a testament about the triumph and conflict that exists between these separate creative forces in every collaborative or individual artist. Or at least, that’s my book club take.

I would recommend this book to anyone who likes genre writing but also has a cautious curiosity about literary fiction. You Don’t Love Me Yet has the sense of fun and self-awareness that good genre writing displays, but is also just pretentious and precious enough to work as a pretty nifty feat of literary fiction. I find a lot of straight literary fiction kind of stuffy or much too invested in its own cleverness to be particularly entertaining, but this novel walks a careful line which made it a genuinely fun book to read that was also a smart little Work Of Art Writing. I quite enjoyed it.

Previously:
As She Climbed Across The Table
Motherless BrooklynGun, With Occasional Music

Email ThisBlogThis!Share to TwitterShare to FacebookShare to Pinterest
Labels: Jonathan Lethem, Novel Reviews, You Don't Love Me Yet