Listening to Phonogram: The Immaterial Girl #3 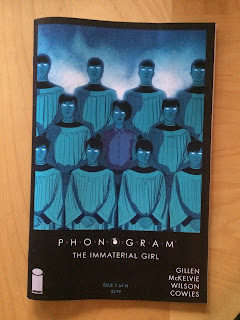 Last week I wrote about a double page spread that was really pretty but didn't quite work for me. My main issue with the layout was that wasn't assertive enough that it *was* a double page spread. Phonogram: The Immaterial Girl #3 has a really innovative, challenging double page spread of comics that is both super interesting and a lesson in storytelling clarity. So I'd like to try and unpack it. 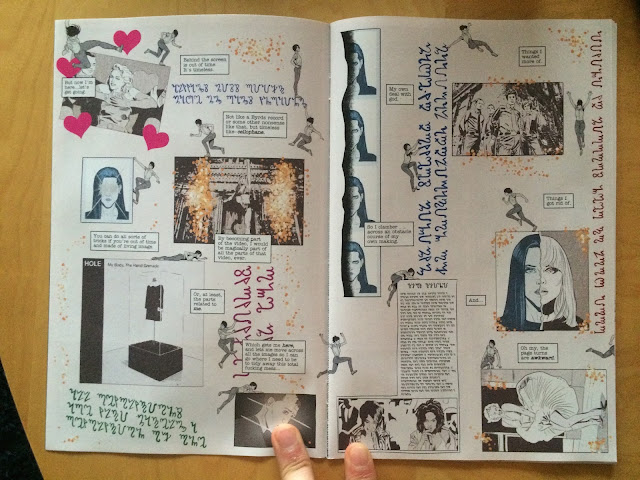 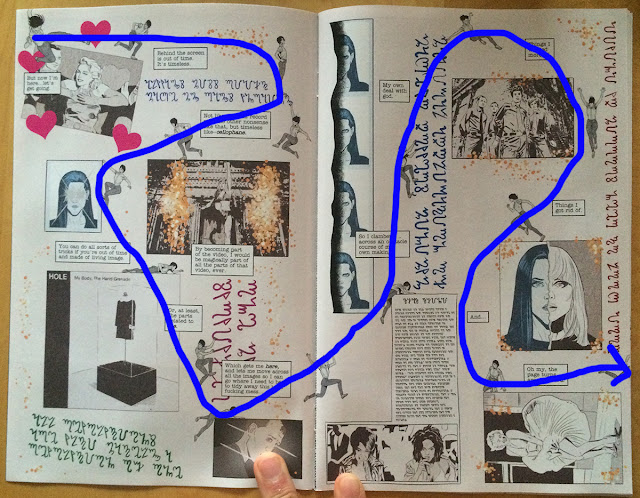 Explaining the story of this page takes a bit of work. Emily Astor, who years ago made a bargain where she would give up half her personality in return for glamour (I mean, it's a more complicated than that, read the comic). The cast off half of her personality escaped her prison and switched places with Emily, trapping her in a world constructed out of the image of popstars, mostly music videos (seriously, read the comic). In the above sequence, Emily, who is comprised of just her image, escapes captivity and moves into a grimoire/fanzine of totemic images (seriously, read the comic, this makes perfect sense). She then begins navigating this zine-space as part of her bid to escape her predicament.

Even taken out of the story context, this spread is great comics. It plays with the page as a literal physical space that the character navigates through. It uses atypical pathways through the page that extend the characters path and enhances the weird environment and the desperate situation Emily Astor finds herself in. It's also just meta as hell, with the image of a character done in the style of a music video about being dragged into a comic, navigating through the physical space of a comic book. Like, just for sheer audacity of concept, that's impressive. This page is also a reference to Young Avengers which also played with this kind of composition as a machine to display impossible magic. This spread is pretty much what I love about comics.

The thing is, despite the experimental nature of this layout, this is really clear, technically sound comics storytelling. 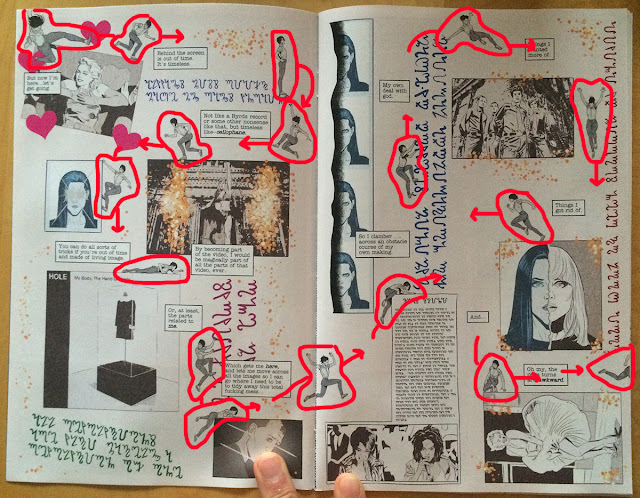 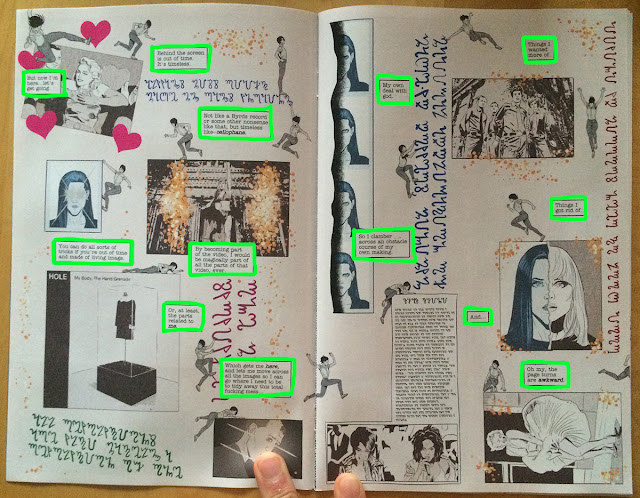 The foundation of the clarity of this page is all in the details. The page has a very obvious, very clear single motif that spans the entire double page spread: there is no ambiguity that this a single storytelling unit. The reading order is also pretty obvious since you simply follow Emily through the page, following the obvious directions of her motion up, down, and sideways through the layout. This effect is supplemented by the dialogue box which stack in between Emily-motion-snapshots so that the direction of motion is reinforced by the writing. Combined this turns a complex, unorthodox page into a breeze to read. 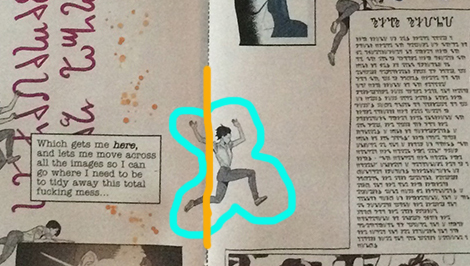 Another key detail that absolutely cements the double page spread is how the page-to-page transition is handled. One of the Emily Astor snapshots actually spans the page break which means that a key, obvious page detail straddles the storytelling area which cannot be ignored. In addition, since the Emily snapshot is also established as the reading order indicator, this choice means the thing the reader has been following around the page is clearly indicating where the reader is supposed to continue into the second half of the composition. It's a small detail but it is perfect execution.

This clarity of storytelling is great because it makes for an effortless bit of comics to read, but it also lets the reader focus on the contents of the page and appreciate all of the clever layout and meta-storytelling occurring. The details matter so much.