I will be adding Mockingbird and dropping Secret Six. 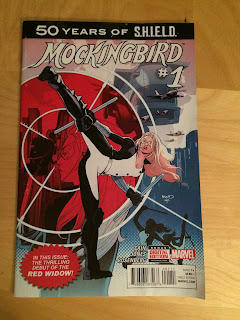 Why Mockingbird: I think a good description of why I'm reading Mockingbird at the moment is encapsulated in this bit of dialogue: "I'm not going to shoot anyone darling. I'm a biochemist...I wouldn't even know how to fire this thing." which is said while Bobbi Morse clearly demonstrates familiarity with a firearm. As an actual biochemist, this particular bit of dialogue tickles me, but as a more general comics reader this snippet I think showcases the wry, playful wit that runs throughout Mockingbird #1 and makes it fun to read. It's playful and smart and I like it. I'm curious to see what it will develop into in a longer format espionage story. The one caveat of my recommendation at this point is I'm not completely sold on the artwork: while it features clear storytelling and has a distinct style, it doesn't quite have the facial acting needed to nail every joke and doesn't really innovate. But it is early days yet, and I'm willing to see give the creative team a chance mesh and completely win me over. 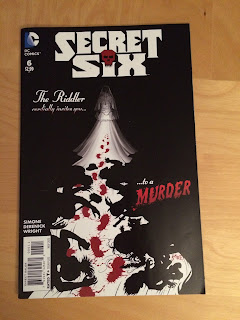 Why not Sectre Six: Secret Six was a comic I was hoping would become playful and smart and a comic I would like. But, even with a substantial chance or the series to find it's voice... it's just not clicking for me. A past iteration of Secret Six, one of my favourite comics, was a heartfelt look at a group of amusing sociopaths who went on morally complex adventures. It was sometimes challenging, bizarrely warm, and absolutely hilarious. This Secret Six just never worked for me. The characters in the series seem somewhat slapped together and lack the maniacal edge and chemistry needed to make the series work. On top of this, Secret Six has suffered from art inconsistencies: the final issue in the current story arc in particular, which featured a fill-in artist suffered from especially poor storytelling and really didn't jive with the aesthetic of the main series artist. If there is one thing that kills my interest in a comic, it's when a story conclusion features subpar artwork. All that said, I've found that Gail Simone comics often have rocky starts but eventually find their stride. I'm hoping Secret Six finds its voice and a more consistent art team and that I get to try it again in a few months.