The Cold Commands Is A Good Book

Or why you should read The Cold Commands
by Richard Morgan 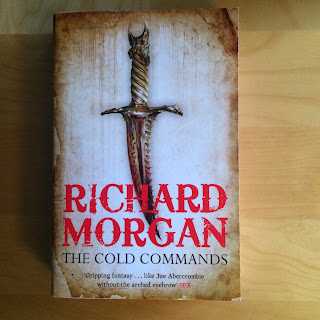 The Cold Commands is the second book in a series. To read about the first book go here.

The Cold Commands is the second novel in the A Land Fit For Heroes trilogy. In the first novel Ringil Eskiath, a veteran war hero and social outcast, is brought back into the world to find a kidnapped cousin. During his investigation he discovers a fell force behind the slave trade, an ancient  race of Dwenda, using the slave trade to find their way back into the world. Seethlaw, leader of the Dwenda, offers Ringil his favour and training to make him a king among humans. But instead Ringil, assisted by war heroes Egar the Dragonslayer and Archeth, the lonely heir of the departed Kiriath, they manage to defeat the Dwenda and prevent their return. The Cold Commands picks up the story with Ringil scouring the world avenging his cousin on the slavers as he tries to deal with the dark magic world he has been exposed to. Meanwhile, Archeth is on a mission from the emperor to travel to An-Monal, the volcanic stronghold of her departed people to investigate a special messenger the enigmatic Kirath Helmsmen are expecting.  Egar the Dragonslayer, in his efforts to protect Archeth from Religious Zealots, finds himself balls deep in a fundamentalist conspiracy deep within the capital city. In many respects The Cold Commands is a quintessential second novel in a trilogy where our characters grow and develop and the plot is advanced towards the ultimate final conflict in the series. It’s a worthy instalment, but not a fully satisfying episode of entertainment in itself.

The Cold Commands is more mature Grimdark, swords and sorcery fantasy. This is a dark, gritty novel filled with anti-heroes and moral complexity. There are certain choices in this novel that are very hard to read and may cross what you view as a moral event horizon. Which makes for an odd read as The Cold Commands is some regards a fairly progressive book featuring queer protagonists and seems very aware of just how immoral and transgressive many of the darker moments are.  It's grimdark certainly, but in a decidedly thoughtful and calculating way; a way that continues ruthlessly examining the themes of exclusion of outsiders. As someone who generally likes morally challenging, gritty fiction that is well written and interesting I really enjoyed this novel.

I would recommend this novel to fans of dark, mature fantasy novels. It is downright bleak at times and is clearly not for everyone given some of its problematic contents, but if you can tolerate some grimness, this is a pretty exciting and engrossing instalment in a pretty excellent Fantasy series. I would strongly recommend that you read The Steel Remains first since this novel is a direct sequel and doesn’t really work particularly well on its own.

Previously:
The Steel Remains
Posted by Michael Bround at 08:00