I will be adding Giant Days and dropping Bucky Barnes: The Winter Solder. 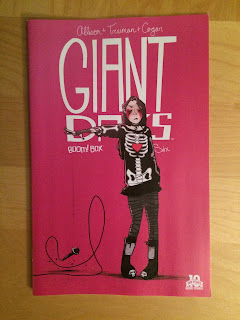 Why Giant Days: Giant Days is a direct market, paper comic that spun out of the Giant Days webcomic, a periodically recurring storyline/sub-universe of the Bad Machinery/Scary Go Round world of John Allison. While the overall fictional universe of John Allison's comics is pretty vast and convoluted, Giant Days is pretty easy to get into: it features one of my favourite Scary Go Round stars gone off to college with a new cast of shiny oddballs as they have undergraduate hijinks. Giant Days is written by John Allison and drawn by the very talented Lissa Treiman and coloured by Whitney Cogar and features the trademark wit, sitcommery, and endearing characters that has had me reading the Allison webcomics for years (and years... and years...). Giant Days is just endlessly charming and funny, both in the haha and the oh... way. It's a nice, fun breath in any pull list.

I've actually been reading Giant Days for a while now on what is basically the down low. It was originally slated to be a six issue mini-series and I thought I would just happily dabble with the series in issues a bit before deciding to review the entire thing as a trade paperback. Fortunately, Giant Days seems to have evolved to a bigger limited series and then again into a full ongoing, which is great and means I need to stop lying to myself and my wife and admit that it's one of my ten, and only ten ongoing comics. 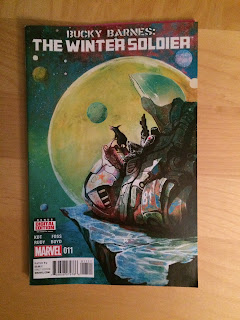 Why not Bucky Barnes: The Winter Soldier:  This is another comic that has recently ended. The comic which featured Bucky Barnes as an Earth defending space assassin who fell into a psychedelic love and drug and interdimensional plot on an alien world was pretty fun. The story was weird and interesting, maybe a bit trite at times, and searingly, gloriously earnest. BB:TWS also featured some truly remarkable artwork. I am not someone prone to putting up comic or sci-fi art on walls, but if I were going to put up a poster it would be interior art from this comic. (Or I guess, paint the side of a sweet van, BB:TWS art would also be really great for that.)  It's totally beautiful and rad. It's also a great example of just how smart and and animated painted artwork can be when coupled to innovative layouts. It's technically a very interesting comic. Ales Kot and Marco Rudy really delivered a funky comic experience, and I'm glad I read it.