So I Read Southern Bastards: Gridiron 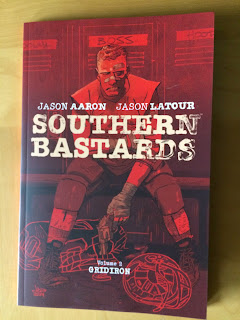 Southern Bastards is an ongoing comic. To read about the first chapter go here.

Southern Bastards is a deep-south crime comic. In the first chapter Earl Tubbs travelled back to his hometown in Craw County, Alabama to set some of his dead father’s affairs in order. Seeing the town overrun by organized crime, Tubbs went about stirring up some trouble. Which got Tubbs dead at the hands of Euless Boss, the crimeboss and football coach of the high school football team. Southern Bastards: Gridiron picks up just after the Tubbs murder and focuses on the backstory of Euless Boss and how he went from being the poor son of the biggest bastard in Craw County barred from the football team to the team's coach and the man who runs the whole damn place. One of the true marks of a quality story is how strong the villain is: one-dimensional, simple antagonists can make for decent backdrops, but complicated characters with detailed goals and motivations make for a much richer story. Southern Bastards Vol. 2 turns Euless Boss from a menacing concept to a well rounded, compelling character with the strength to be the star of his own story. Which has me far more invested in the coming conflict as Earl Tubbs' daughter is finally coming back to Craw County to discover just what happened. A storm is coming to Southern Bastards, and I can’t wait to see it erupt.

Previously:
Southern Bastards Vol. 1: Here Was A Man
Posted by Michael Bround at 08:00