I will be adding Howard The Duck and dropping Secret Avengers. 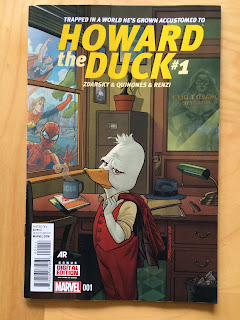 Why Howard The Duck: mostly because it’s something different. Chip Zdarsky and Joe Quinones are two creators that I’ve always enjoyed as slightly idiosyncratic. Chip Zdarsky in particular has an oddly earnest and just, uh, odd sense of humour that seemed like it would fit well with an oddball premise like an alien duck-man (man-duck?) trying to fit into a world of disgusting ape creatures by working as a down-n-his-luck private investigator. I also thought he would bring the funny. And so far Howard The Duck hasn’t disappointed being an amusing weird comic filled with duck puns. Which has made for a fun change of pace in my pull list. I do wonder, a little bit, if Howard The Duck has the staying power to be a comic I’ll read longterm, or if it is a fun premise I’ll enjoy for a while before moving on to something else. Still, for now, fun stuff. 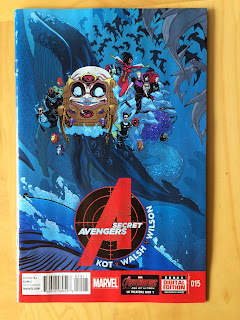 Why not Secret Avengers: because Secret Avengers is over. This is another comic that had its moment in the sun, told its story, and finished it in a satisfying and enjoyable way. Ales Kot, Michael Walsh, Matt Wilson, and Clayton Cowles delivered a consistently uncouth, often funny, and deeply earnest comic filled with some really powerful moments and some really smart comics.  I will miss this book both as a reader and as an art critic. I’ll also deeply miss Secret Avengers take on MODOK whose combination of brilliance, insanity, and passionate sincerity has been a revelation and something, in a way that I find kind of worrying, I found myself really relating too. So goodbye Secret Avengers, goodbye noble Science mutant!