Or a look at the interesting colouring choices throughout Black Widow
by Nathan Edmondson, Phil Noto, and Clayton Cowles; Marvel Comics 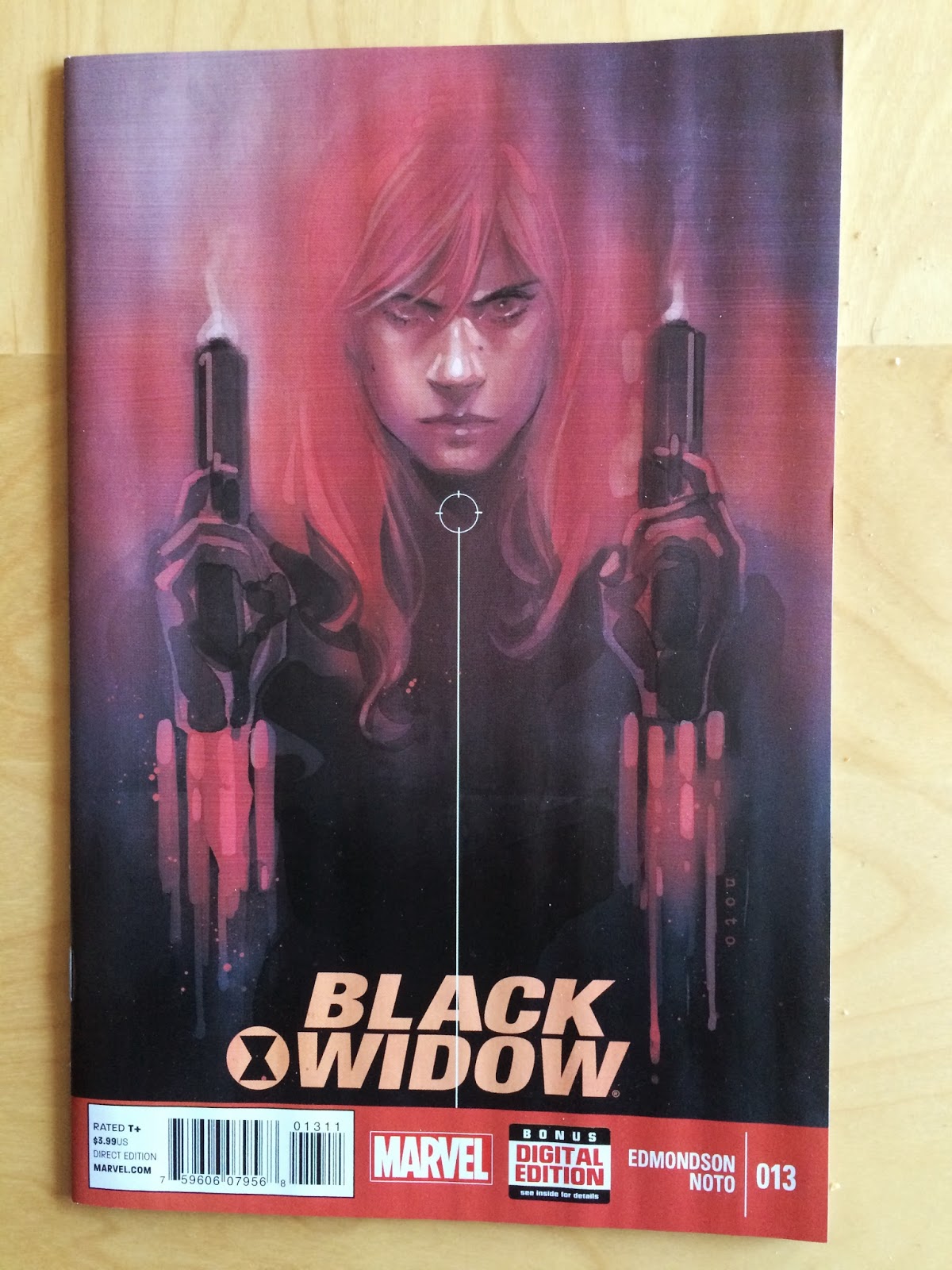 Black Widow is another of those comics I have been reading for a good long while but haven't really written about. It reliably delivers a solid espionage story and really stands out in that it is entirely a spy comic from a publisher that is almost entirely focused on superheroics. I really like it.

The main reason I haven't written about Black Widow until now has to do with its style. Black Widow, in the art hands of Phil Noto, has a very distinct style: it has this cinematic painted look coupled to incredibly photorealistic characters and design. The combined effect is this comic that looks very realistic, and makes the events portrayed in it feel very believable. The trouble is, beyond pointing out its unique voice and realism, I didn't think there was very much I could say about Black Widow.

But then I noticed that Black Widow #13 does some subtle smart things with colour and that there are actually a few noteworthy examples of nifty colouring effects throughout the series. Which are maybe worth taking a closer look at. 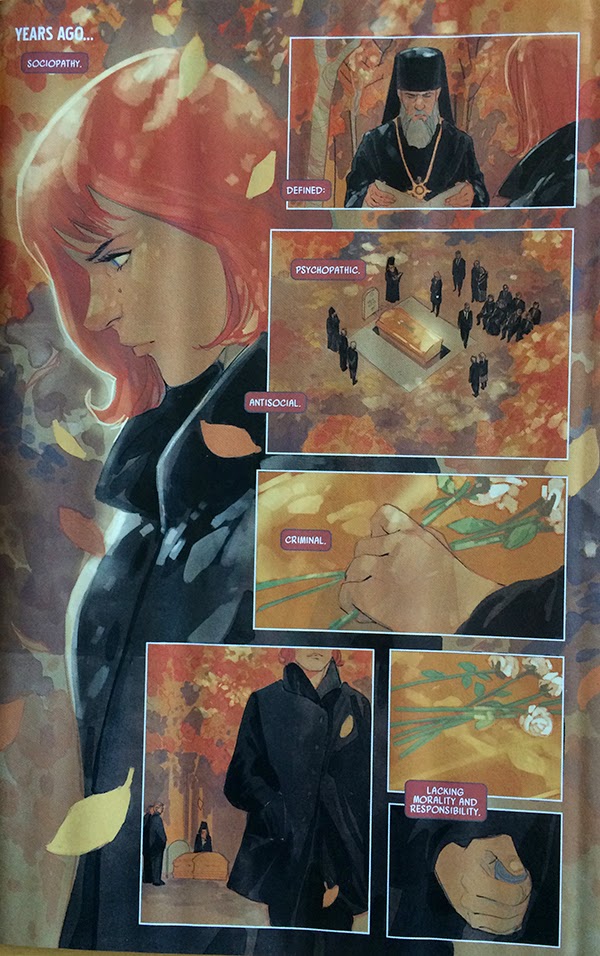 The majority of Black Widow is coloured in a decidedly photorealistic style. It is in full colour, with believable shades, and makes really great use of light to give everything a decidedly cinematic experience. It is a comic that often looks filmed which creates a sense that the events portrayed are actually happening. It's a great look and helps cement Black Widow as a more grounded espionage story. 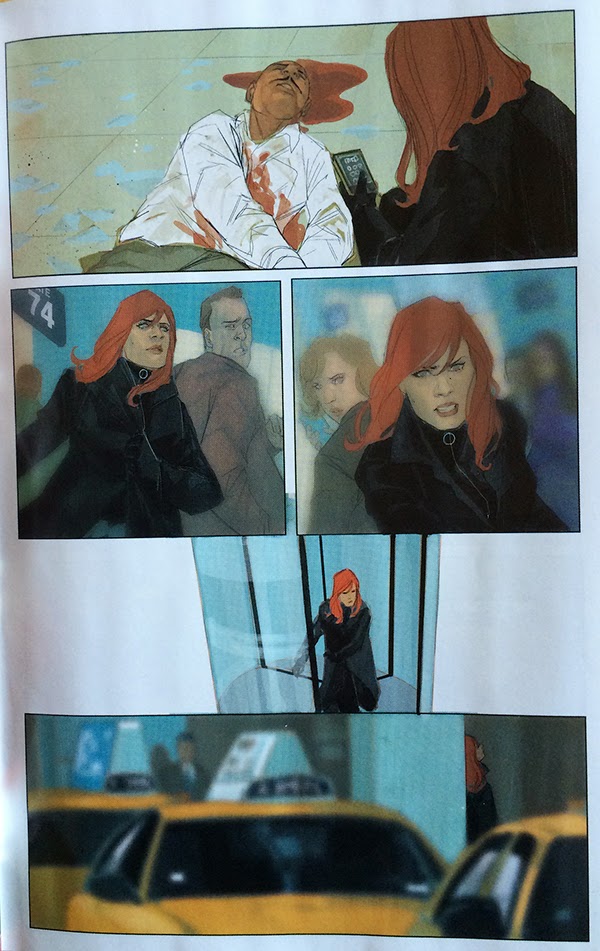 In the theme of photorealism and cinematic style choices, this sequence here is really interesting. Black Widow has just assassinated a man and is fleeing from the scene of the crime. What gets my attention about how this scene is executed is how focus and blurring are used on the page. In film and photography lenses have very particular focal points or planes: for a certain configuration of lenses there is a point where everything is crystal clear and often, depending on the particular lenses, there are regions that are out of focus and blurry. This is what people mean when they say bokeh. This trait of camera lenses is actually considered pretty desirable in certain situations because it lets the photographer focus their pictures on a particular chunk of the composition. The key person, thing, or aspect of a photo can be focussed while other background or less essential parts of the photo can be left blurred or slightly out of focus so that they appear less important. And this sequence replicates bokeh to make for a very cool sequence. In the second level of panels we see Natasha in focus as she pushes through a crowd of blurry people, which let's us focus on her but still be aware that she is moving through a crowd. In the final panel, we see the foreground deliberately blurred with a semi-hidden Black Widow hiding in the midground. In this case we can still focus on Natasha despite her being hidden and also get a wonderful sense of depth in the panel. This use of bokeh-style blurring also makes the scene feel like it is being explicitly shot with a camera which adds a layer of drama to the scene. It feels like someone is observing Black Widow as she escapes and hides, which really sells the character's emotions and paranoia. It's a really subtle and great choice. 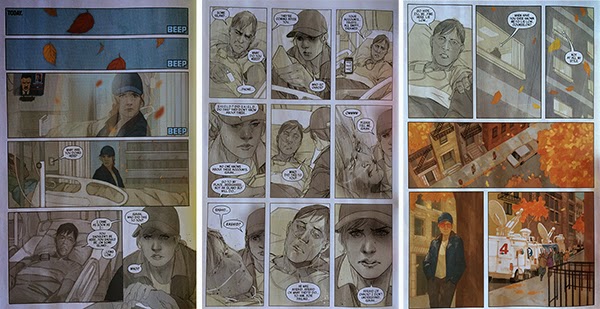 Another neat feature of Black Widow #13 is how colour is used in the hospital room scene. In the scene Natasha sneaks into visit her manager Isaiah who has been badly injured in an attempt to hurt Black Widow. It is a painful scene filled with shame and anger and remorse and physical pain. And the colouring absolutely enhances this. Instead of being in full colour like most of the issue, this sequence is done in muted, sickly sepia tones that wash out the colour, life, and humanity of the depicted characters. It's like the entire page is pale and miasmatic and as injured as Isaiah. It really captures just how hurt both Isaiah and Natasha are in this scene and also why I absolutely hate hospitals. It's great stuff.

And it reminded me that this kind of palette modification for emotional effect has happened in past issues of Black Widow. 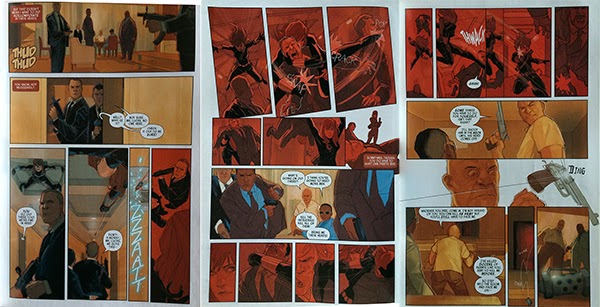 The interesting use of colour in Black Widow actually dates back to Back Widow #1. In this issue the key action sequence flashes red and gets rougher, darker line work that just screams danger and violence. It's a simple choice, but it makes this collection of red panels absolutely jump out and feel more important and dangerous than everything else in the issue. It was a really cool choice that a year later I still remembered enough to dig out for this post. Which tells you it's an effective choice. 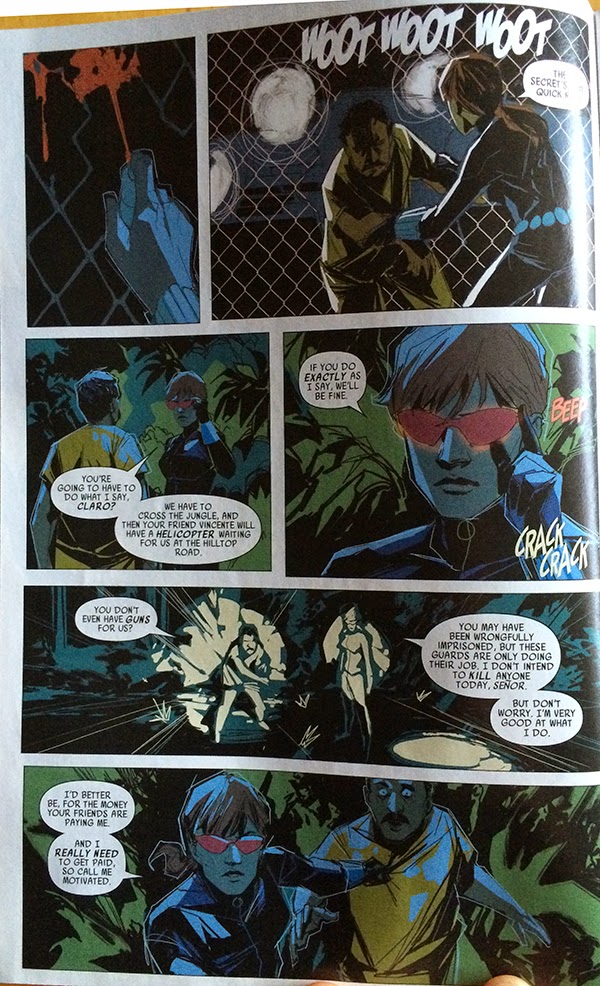 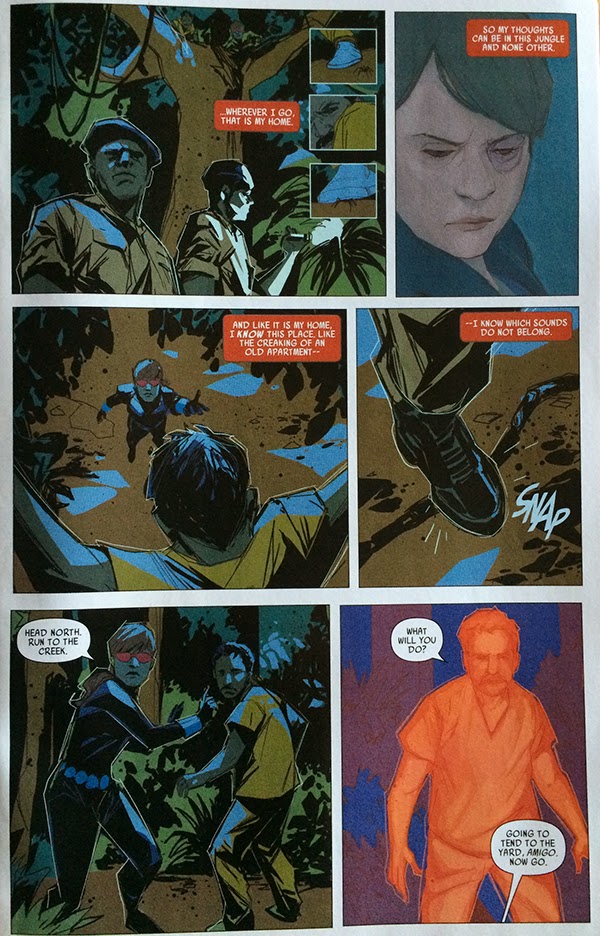 In Black Widow #3 there is another interesting example of an altered colour palette in the mostly photorealistic comic. In this case, while trying to escape through the jungle with a liberated prisoner, Black Widow uses some sort of nightvision goggles to see in the dark. During this sequence the panels are coloured in a kind of nightvision pallette. Gone are the full painted colours, and instead things are coloured in muted brown and green with blue, light based highlights. It's a cool choice because it lends the entire scene a brooding, pursued quality and lets the comic happen in the dark of the night but still be visible to us readers in an authentic seeming way. It's also pretty adroitly done: the dark palette feels like night vision, but is still quite dark which is distinct from the bright green of actual night vision, or the glowing orange of infrared vision (like in the bottom right panel above). It's pretty great comics.

Altogether, I think these selections really show how smart colour choices can really play with photorealism to charge scenes with gigantic emotion and atmosphere. It's great stuff from a pretty great comic.