Or a look at how layout is used to make nifty time travel effects  in Trillium,
by Jeff Lemire; Image Comics 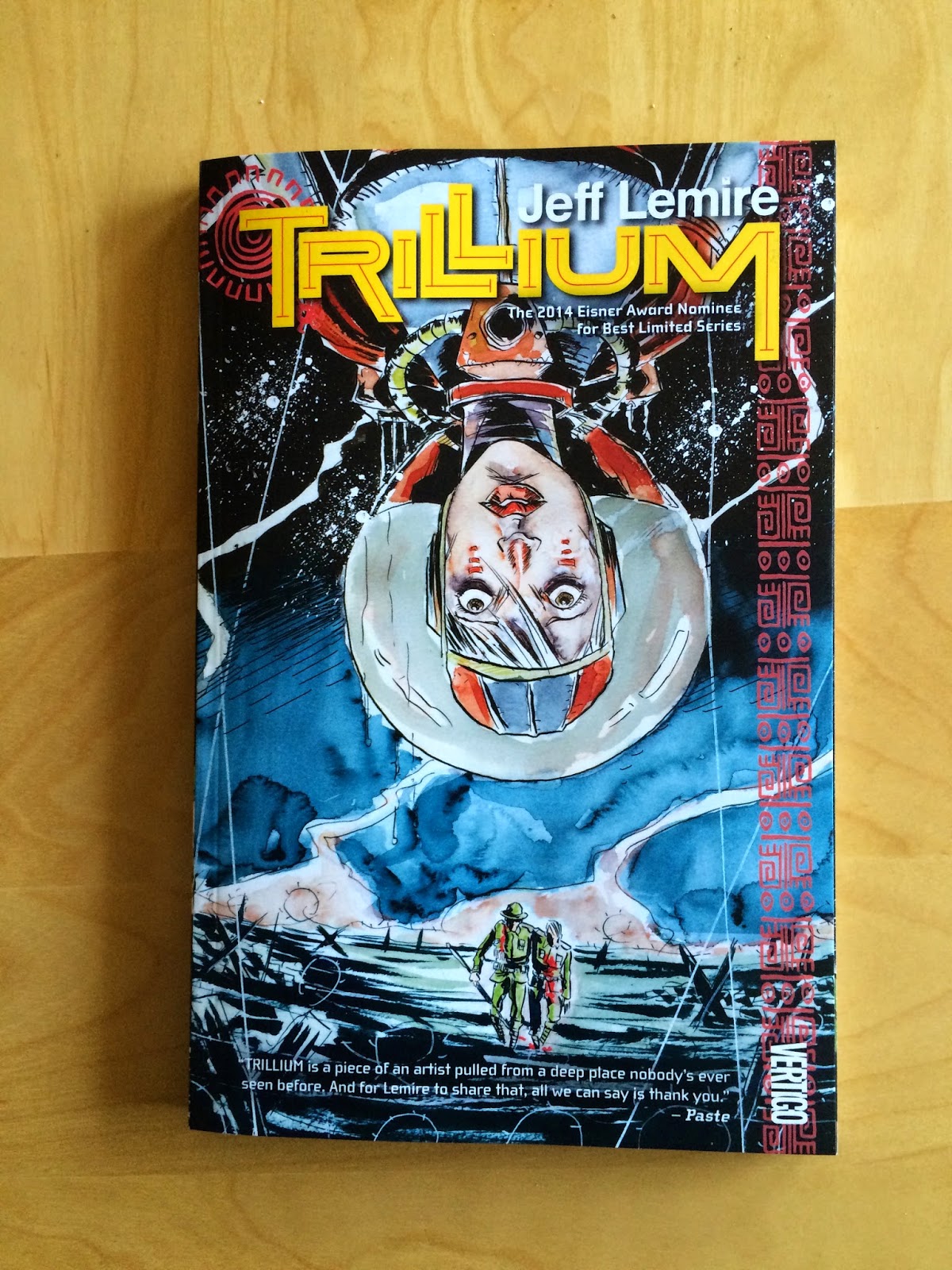 Trillium is a psychedelic time-travel love story. Trillium sees a wounded World War 1 soldier and a traumatized Scientist from a future where a sentient virus is eradicating humanity come into contact and fall in love through alien intervention. It's a nifty Sci-fi comic worth checking out.

Trillium is also a comic that does some interesting structural things with layout to make some of its more exotic timetravel elements work. And it is worth taking a closer look at.

There will be extensive *SPOILERS* for Trillium below.

The first issue of Trillium existed as a flipbook. Read in one direction and orientation the comic tells the story of Nika, the future Scientist, while read in the other direction it tells the story of William, the solider of the past. (Sadly, these two chapters just run as sequential subchapters of in the Trillium collected edition.) This formatting decision creates a clear physical separation between the two storylines and timelines, they are completely separate eras and therefore completely separate stories that do not intersect or overlap. It is an interesting gimmick and an effective storytelling choice. 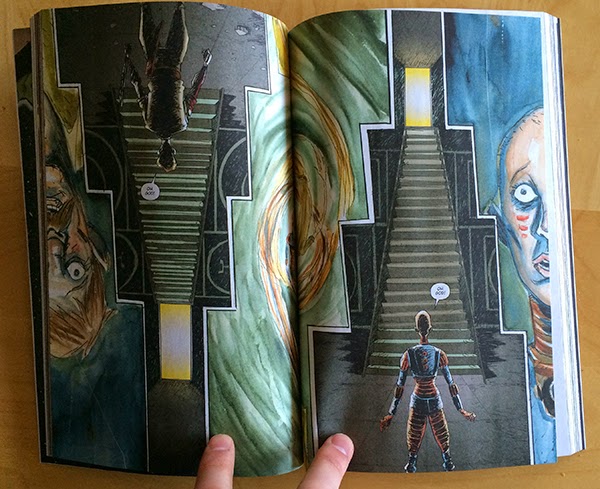 However, due to the intervention of an alien pyramid Nika and William find themselves travelling through time and meeting in the past. Their narratives intertwine and begin to function as a single storyline that works like a normal comic. It's a structural, layout indication that their stories have melded and become a single narrative due to their time travel. And yet, the comic still takes steps to remind the reader that timetravel is in effect. Like, this double page spread where Nika and William break into their era's respective timetravel-pyramids. In this case their parallel situations are reflected in parallel drawings, yet their different chronological locations in history are indicated by inverted orientations. It is immediately apparent that despite standing in the same apparent rooms, these two characters exist in non-linear narrative spaces. It's a neat idea. 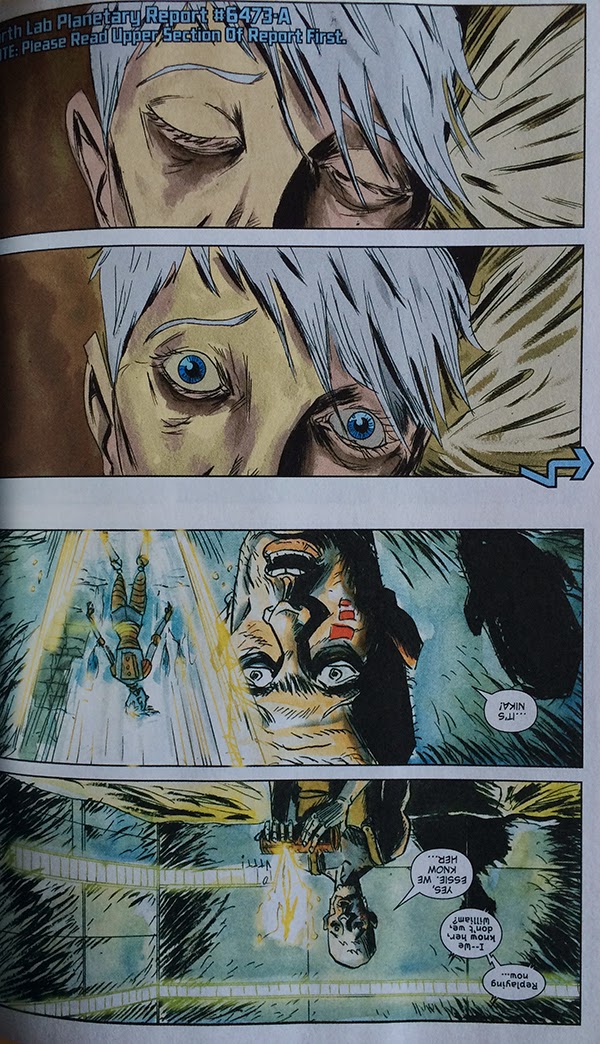 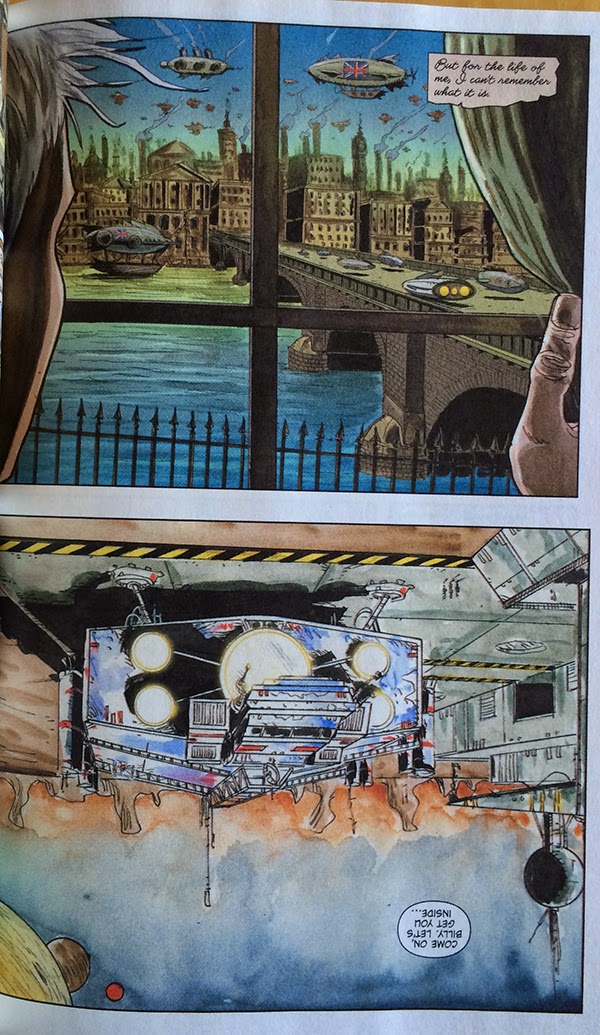 Due to some misguided damage to the time-travel pyramids Nika and William find themselves flung into the time stream and lost, essentially in each others lives. Nika awakes to find herself a recovering soldier in a steampunk London following a much different alternate history WW1. William, meanwhile, finds himself living the life of a far-future survivor of the sentient plague wiping out humanity. And so our two heroes find themselves relegates to separate eras and narrative streams. This time this aspect of the comic is represented by chopping each page in half, devoting equal space to either narrative, and flipping the orientation of the images between the stories. This does some interesting things. For one, it emphasizes the separation between the two stories: the different orientation cements each story as occurring in a different historical location and that the two stories do not narratively overlap. And yet, this layout construction allows the two narratives to play off each other and to emphasize the parallels between the two stories. Whats more, this setup also creates a... common narrative timeline, let's say. While the two stories are in different eras, this layout allows the reader to order the events narratively between the two stories such that story blocks occurring on the same page take place, narratively, at the same time. It's a really interesting and effective layout approach. 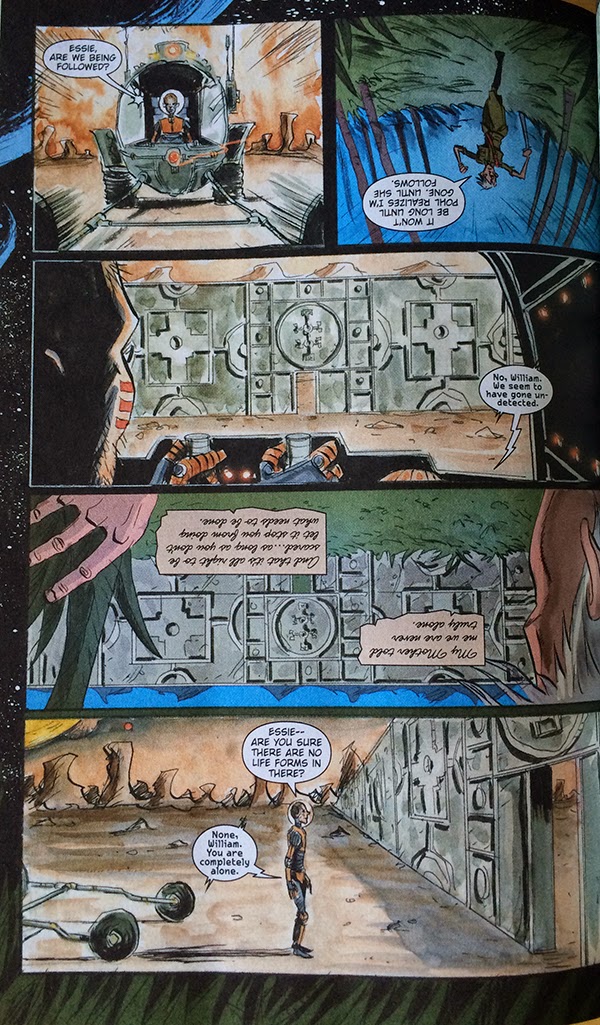 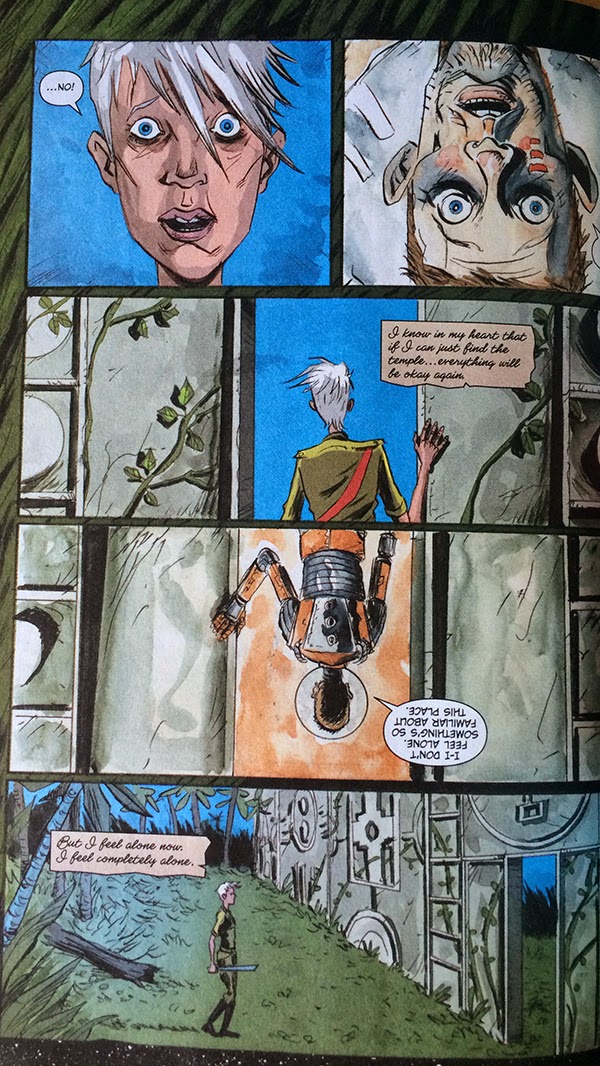 As Trillium progresses, Nika and William remember each other and, displaced as they are, begin to work their way back to the time-travel pyramids. Panels from different eras still have flipped orientations, but now they are interspersed, providing a structural indication that the two narratives are drawing back together. It is layout being used to show that while the events are happening in separate time spaces, there really is one story taking place on any given page. It's another very effective choice. 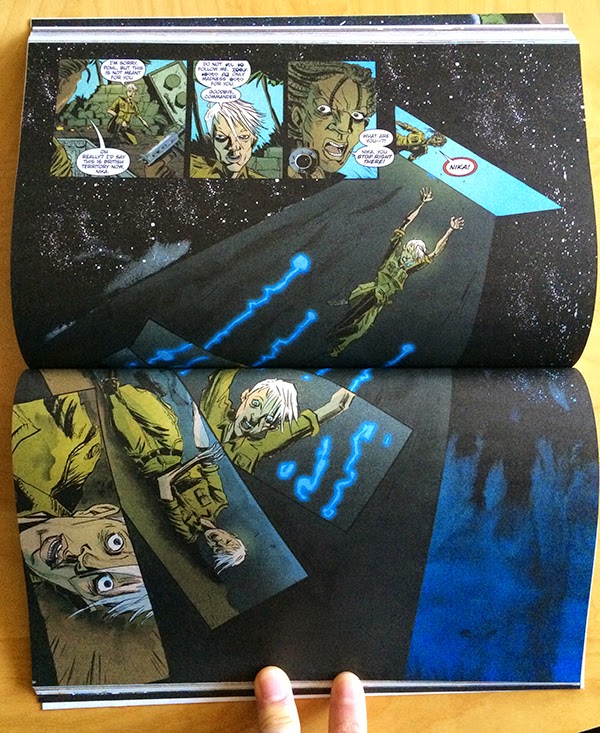 Trillium continues to do interesting things with layout. On this set of pages, Nika falls through a gateway between her current timeline and a into a new, different location and era. The layout here does a great job conveying this. For one, this layout is a double page spread that is flipped on its side, a particularly rare construction that helps convey just how special and impossible the event of Nika's time-tumble is. This layout is also remarkable in that there are two different panel planes at work here. The page enters in a sideways orientation, with panels moving along the tallest aspect of the page, and yet, when Nika falls into the machine, the orientation swings back into a conventional approach. Which, given the association with orientation and time-era in the comic, tells the reader that Nika has been transported from one chronological location to another, that timetravel has happened. Which is all information conveyed using layout, which is pretty impressive. 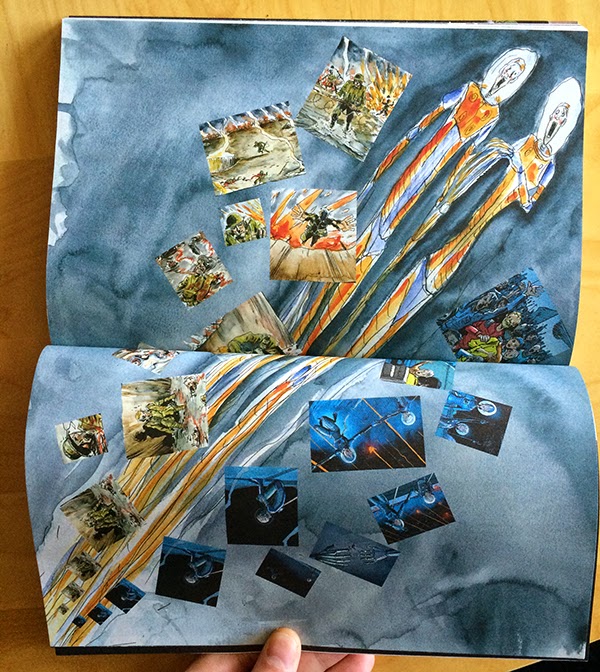 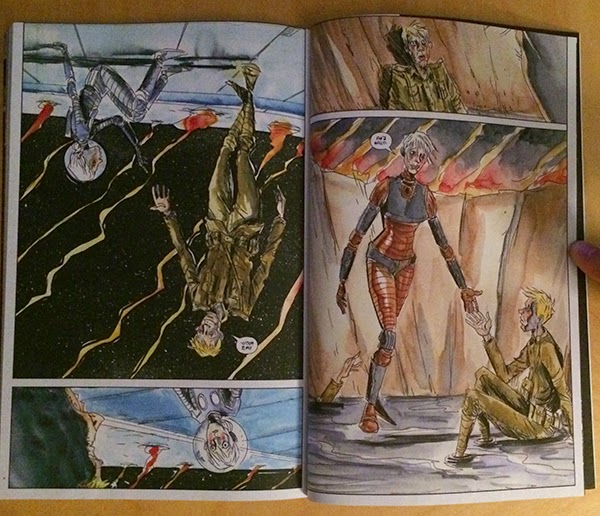 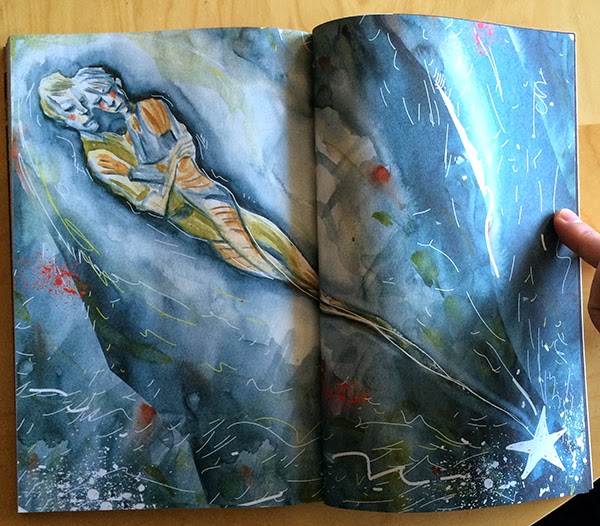 Finally at the climax of the comic a number of impossible and psychedelic things happen in Trillium. Nika and William, in an act of sacrifice that potentially saves the human race, steer themselves into a blackhole. As they are consumed by the singularity they are dragged across the page in another exciting tilted doublepage spread. The pair relive their lives here and then on the next pages, we see the characters reach into their moments of greatest trauma, and save each other. These pages again rely on the previously established convention of using opposite page orientations for events occurring in different narrative spaces and eras. It's a beautiful and perectly communicated moment. A moment that leads into another beautiful doublepage spread that shows the timetravelling lovers, finally at peace, stretching off into infinity. It's a great ending that uses layout to communicate just how impossible and significant these final moments are.  It's a great ending.

Trillium is a structurally interesting comic. The way it uses layout and panel orientation to convey story structure and time setting is a really cool feature of the comic that is really worth checking out and studying. It is really effective. It also makes me wonder about what other techniques may have been used in addition: how would Trillium have looked and worked if, say, colour or panel design were also altered between timelines? Would it have been more effective? Given how prevalent timetravel is as a trope in genre comics, it might be worth thinking more about the strengths and potential areas for improvement in Trillium.

Previously:
So I Read Trillium
Posted by Michael Bround at 08:00