On the pressure of expectation in Thor #3
by Jason Aaron, Russell Dauterman, and Matt Wilson; Marvel Comics 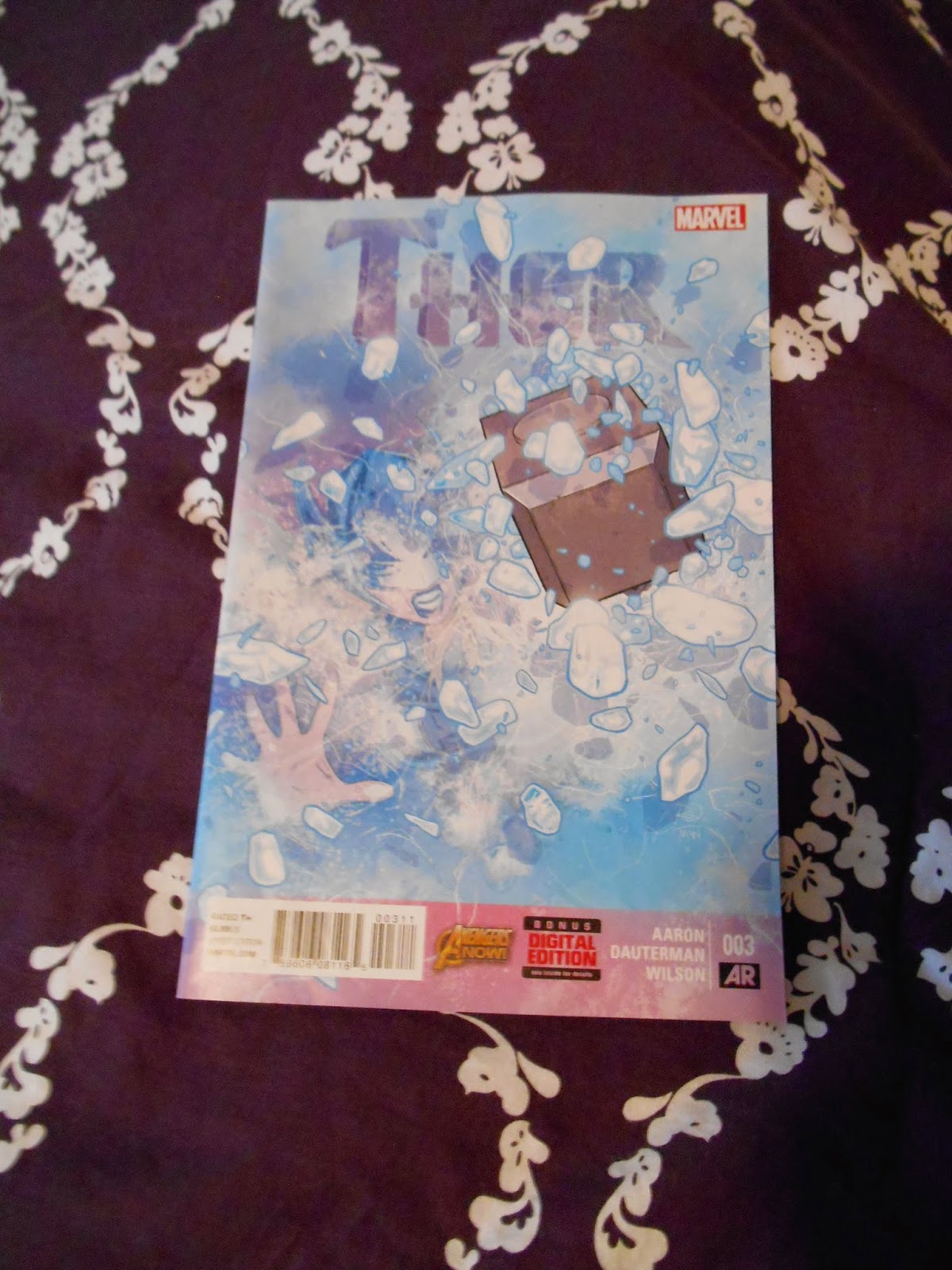 At the end of Issue 2, Thor found herself separated from Mjlonir and facing down a pair of Frost Giants laying siege to Roxxon Island, wondering who she was without the hammer in her hand. The question of her former identity remains, but in the moment, her only concern is how to continue to be worthy of Mjlonir without actually being able to wield the hammer.

As always, *SPOILERS* are contained within. Read on at your own risk if you want to get the plot of the comic yourself before I talk all over it.

At the start of this issue, we see a flashback of Malekith and Skrymir discussing the invasion of Midgard. Skrymir is hesitant to go to war with Thor, but when Malekith informs him that Thor Odinson has lost his hammer, the plans for invasion begin.

What is Thor without his hammer? “Nothing but a God,” if you ask the Frost Giant. 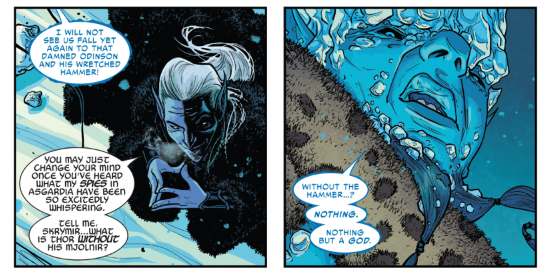 Coming face to face with Malekith back in the present on Roxxon Island, We see the emerging personality of Thor again. Faced with an enemy, she boasts and postures, taunting the elf as she thinks former-Thor would. But the question remains…can she face the giants without the hammer?

For now, Thor is drawing inspiration from her predecessor for behavior, behaving in a way she believes Thor would behave. She is trusting that Mjlonir knew what it was doing when it chose her, and that she can—and must—handle the situation at hand. If Mjlonir says she is worthy, she must be worthy—and she seems to gain some confidence from that.

We learn something else from this issue as well, while Thor is trying to get Mjlonir back in her hands: when Thor isn’t holding Mjlonir for an extended period of time, she feels her power slipping away and begins to revert back to her prior identity. Malekith notes at one point in the fight that she is masked, wondering aloud who she might be hiding her identity from. Malekith, of course, also takes the time to accuse her of stealing the hammer, doing what he can to sew seeds of doubt in her mind. It seems that her new identity is somewhat tenuous, that being Worthy alone might not be enough to remain Thor. 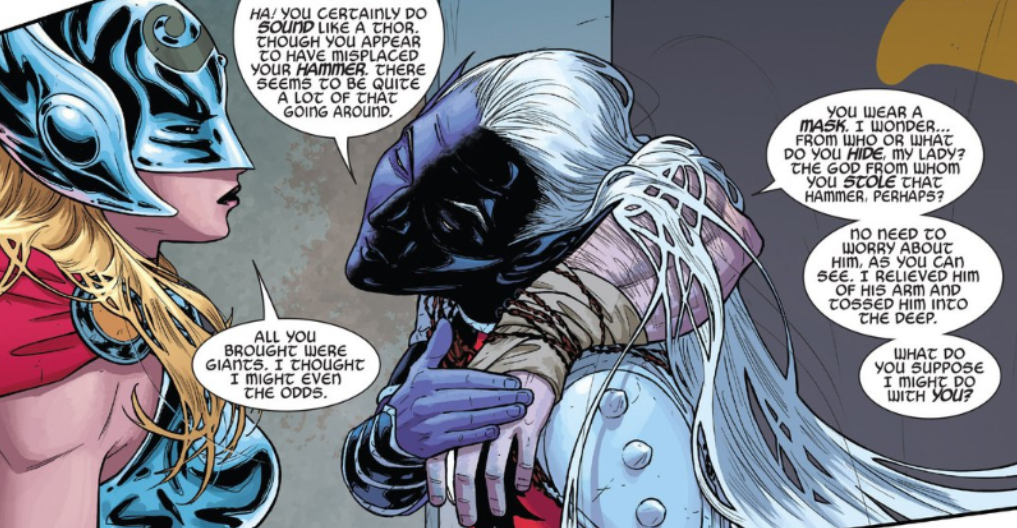 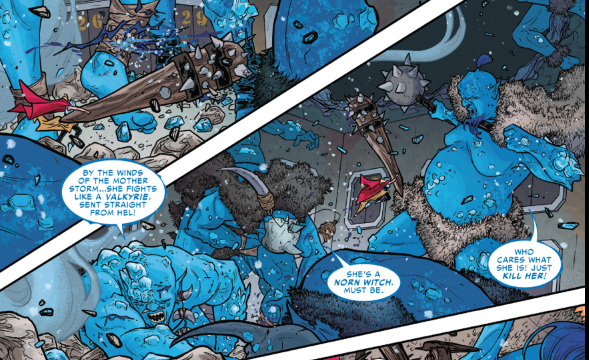 The mystery of who our Thor is under the mask is starting to interest more than just the reader—even the frost giants she’s fighting wonder who she is.

For the first time I can remember, we have a Thor with a secret identity.

For all the uncertainty about our Thor, she seems certain of a few things—she was chosen to take this role, and so, she is going to do everything in her power to fulfill it. Thor is the protector of Midgard, and she is Thor. All it takes to convince her to step into the role is the validation that she is worthy of the job. 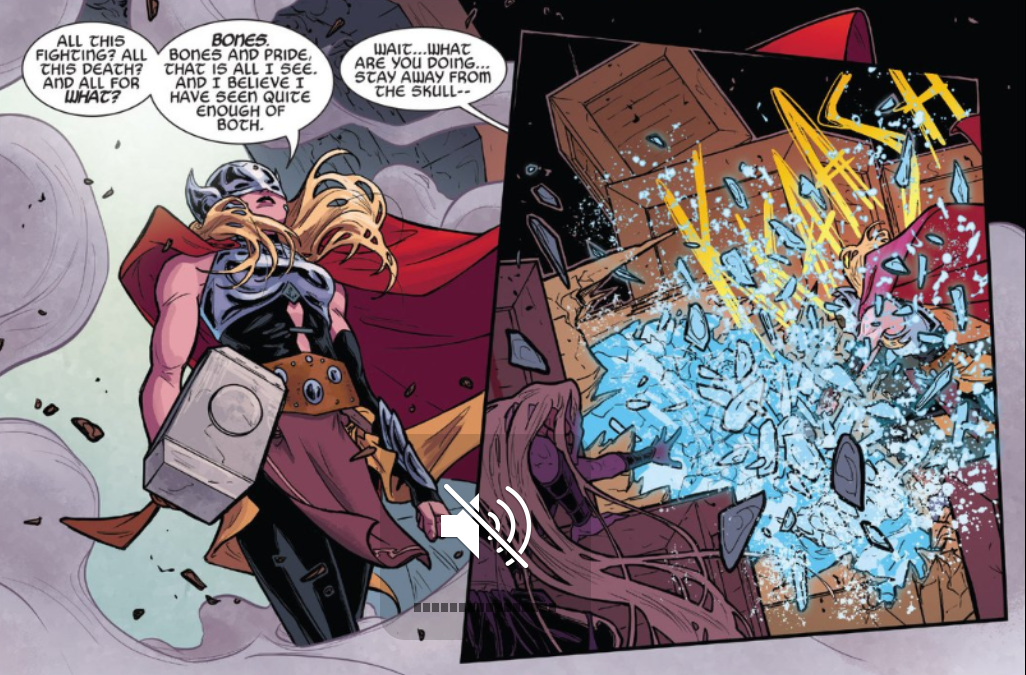 How much of Thor’s identity is banked on the concept of worthiness? Just as much as the previous Thor was destroyed by the idea he was no longer worthy, Thor is drawing strength from gaining the same designation.

In reviewing Thor #2, I referenced Marcia’s theory of identity development, which centers around the idea that in order to develop our identity, we explore multiple roles and ultimately commit to a set of elements, resolving the necessary identity crisis of adolescence.

In Marcia’s identity theory, there are four identity statuses a person may experience.  Ideally, a person wants to have explored roles and made a commitment, resulting in identity achievement. In identity diffusion, an adolescent isn’t exploring because they don’t have a sense of having choices available. A person in moratorium is in crisis and exploring commitments, but hasn’t made commitments yet. I had thought in the previous issue that Thor was somewhere in this stage, exploring what roles she might commit to and defining her ethical and moral values, I’m starting to think she is also experiencing identity foreclosure.

In the identity foreclosure status, a person seems willing to commit to some roles, but hasn’t explored a range of options. It’s in this stage that a person is most likely to conform to the expectations of someone else. For adolescents, this often means conforming to the expectations of parents or other influential adults in areas like career or college exploration, or even religious affiliation.

We are absolutely seeing Thor take on characteristics she believes Thor *should* have.  At one point in the fight, she thinks to herself about what Thor would do. “The hammer chose me,” she thinks a moment later, “That means I’ll do nothing less.”

So the question becomes, are Thor’s actions motivated by her internal sense of self, or by the expectation that these are the actions she has to take now that she wields Mjlonir? How much is the assignation of worthiness a self-fulfilling prophecy?

While I expect, eventually, Thor will reach identity achievement, I’m curious if her achievement will be for one identity, or for two. I’m very interested to see how she either integrates these two identities or develops them along side each other.

And with the appearance of a familiar face on the final page, it seems like the questions of worthiness, identity, and what influences the two have on each other are soon to come to light.

Regardless, I’m with Malekith on one point: