Or some of the excellent comics worksmanship in Daredevil #10 and #11
by Mark Waid, Chris Samnee, Matt Wilson, Joe Caramagna; Marvel Comics 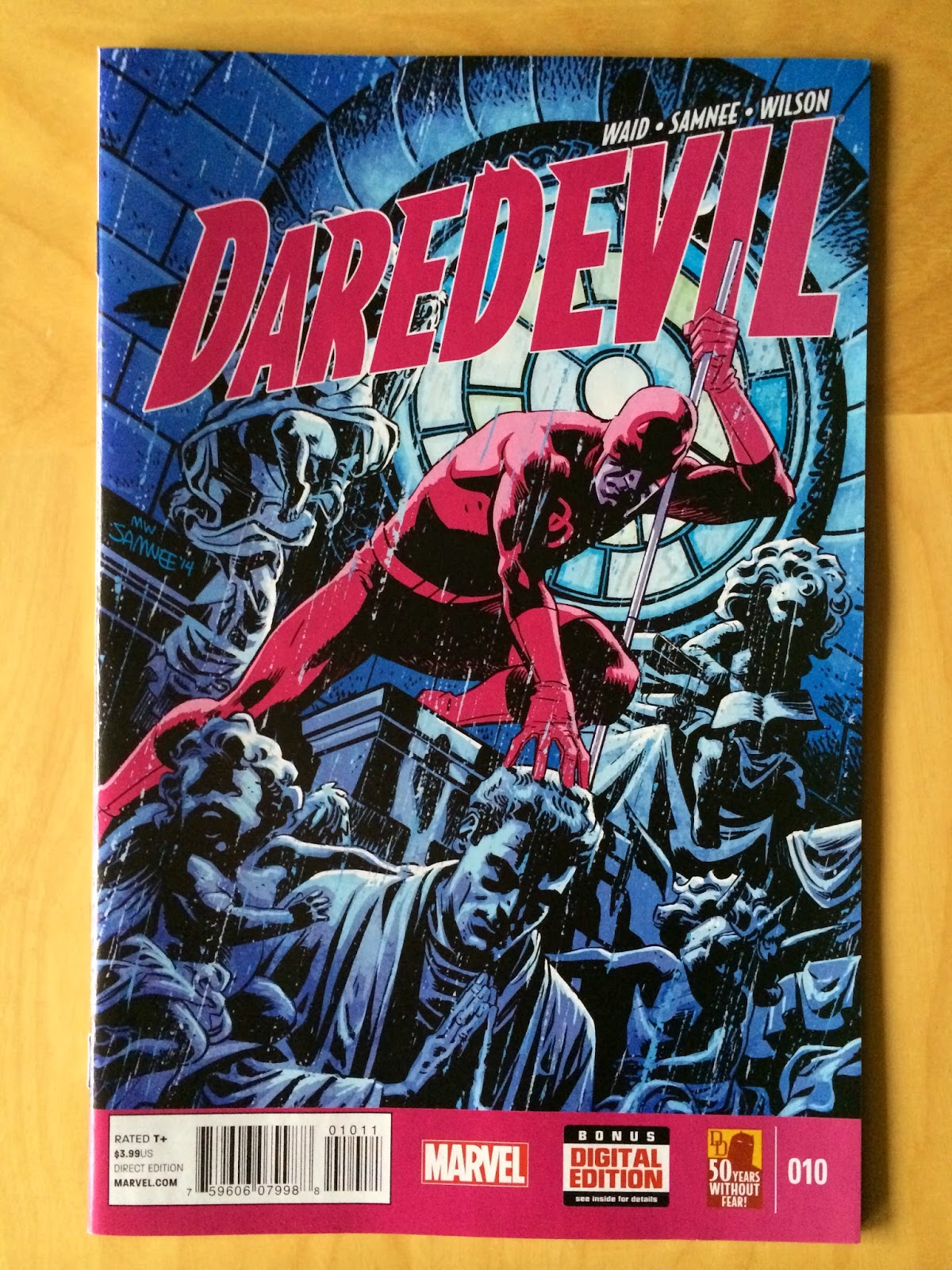 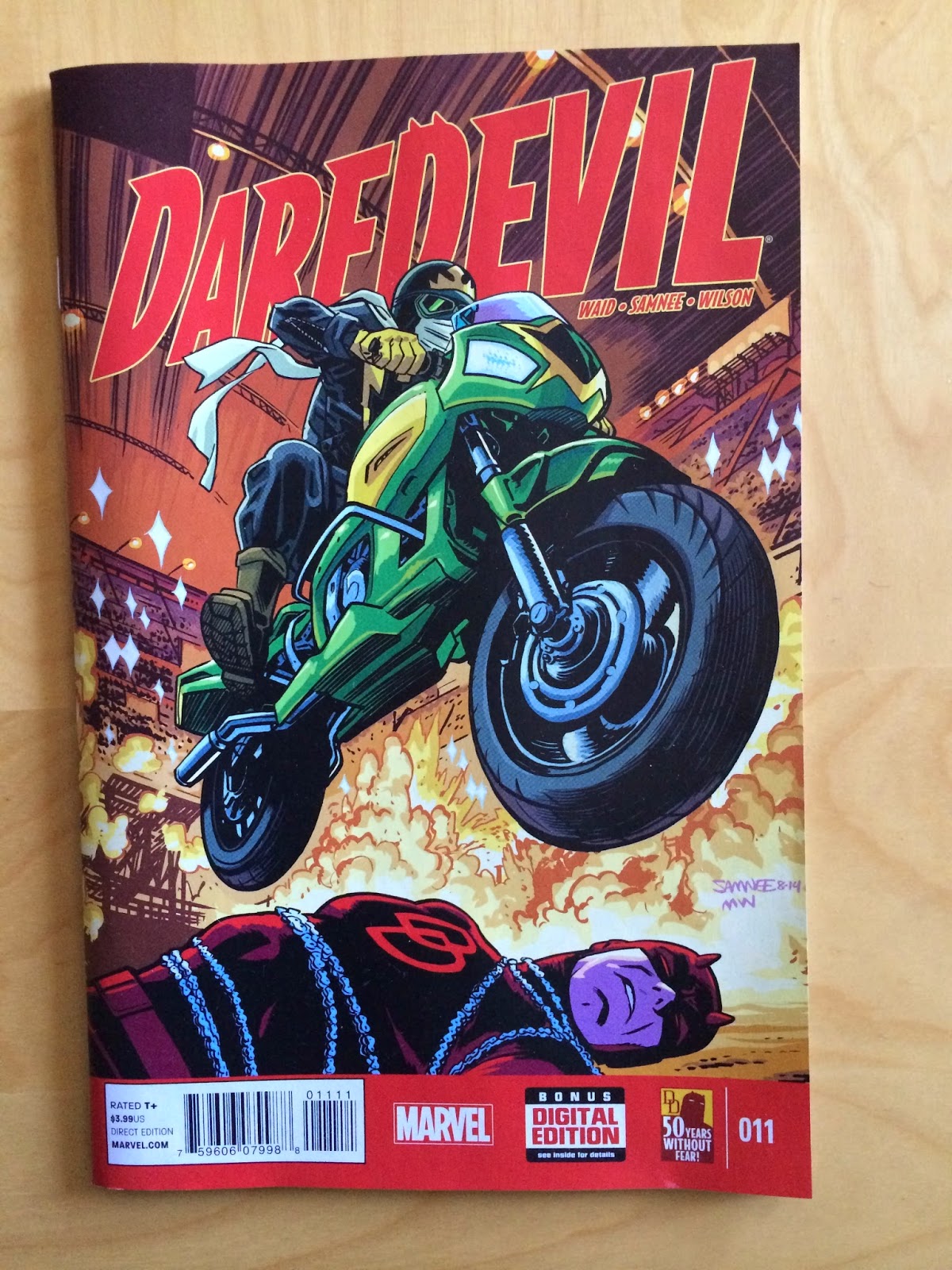 Daredevil is an absolute horse of a comic, reliably providing exciting, interesting stories delivered with really adept artwork in every issue. It's the kind of comic that is always eminently readable just all round good comics experience. Except, of course, when it's great.

Daredevil #10 and #11 have a bunch of examples of great comics magic worth taking a longer look at.

There will be *SPOILERS* past this point. 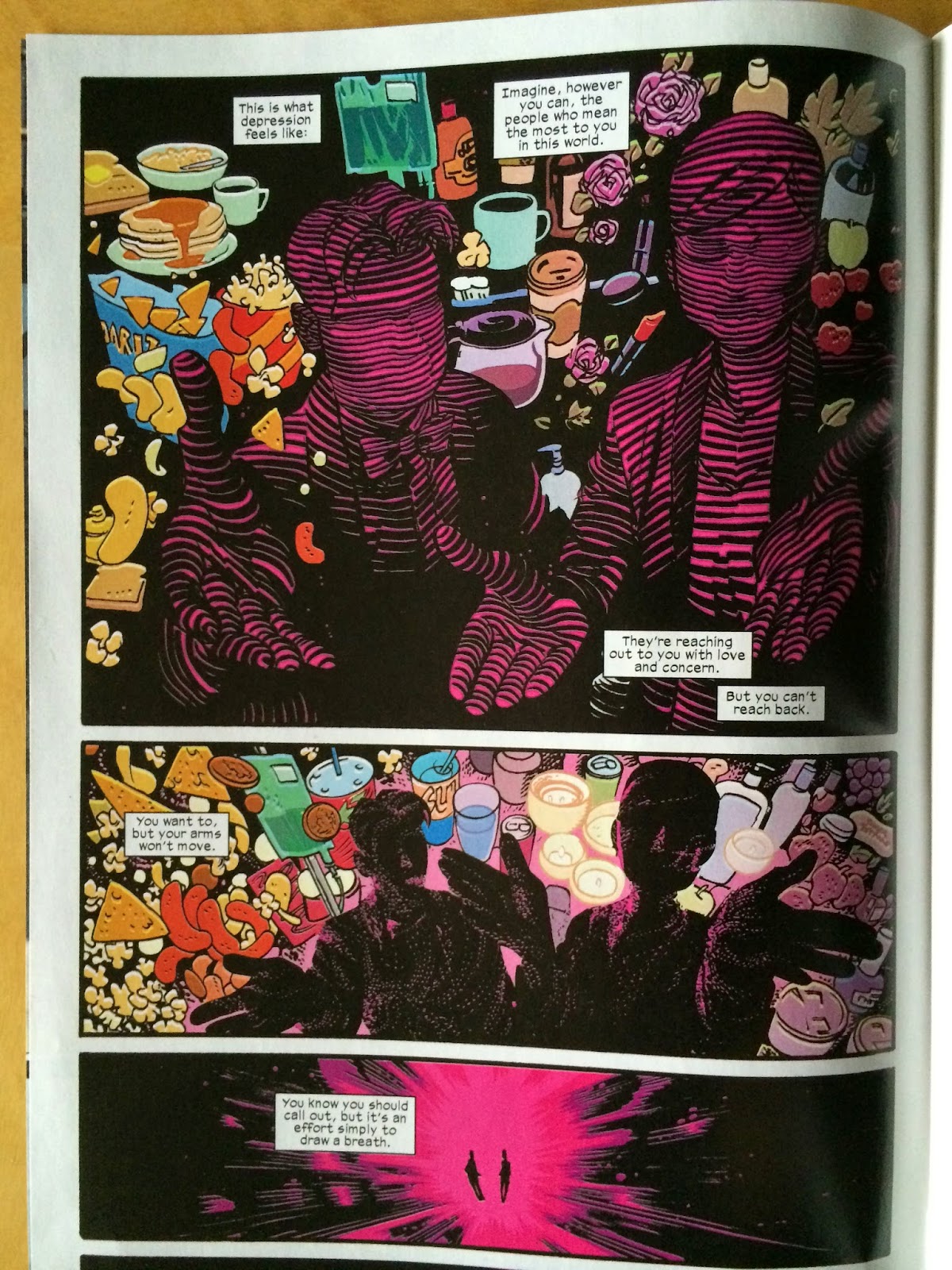 One of the most consistently innovative elements of Dare Devil under writer Mark Waid and artists Marcos Martin, Paolo Rivera, Chris Samnee, Javier Rodrigues, and Matt Wilson, is how the comic deals with Daredevil's blindness in innovative ways. Blindness is, if you think about it, a deeply challenging condition to portray in a visually interesting way: it is by definition decreased or a lack of vision. At it's most extreme it would be a solid black panel. Daredevil has taken this head on by creating visual symbols to represent non-visual senses to try to communicate the way which Matt Murdock understands his world. This has included the bright pink topographic silhouettes generated by his radar sense or the really smart, integrated use of onomatopoeia to communicate the importance of sound to Daredevil. It's been really neat comics.

In Daredevil #10 we see the introduction of scent to the fray. When it comes to recognizing other humans, scent is this deeply intimate part of the equation. This is probably especially true for Daredevil who has superhuman smelling powers. So it is really a fantastic choice to use scent symbols, the floral scents of hygiene products for Matt Murdoch's girlfriend, Kirsten McDuffie, and the junkfood and chemo reek of Muroch's friend Foggy Nelson, as recognition keys. We are able to see the specific scent mixtures that act as fingerprints for both characters and how important smell is for Matt in his association with people. What's cool is that this information also provides character information, like Kirsten is scrupulous about her appearance and that Foggy is ill and also a gluttonous slob, which let's us actually recognize the characters using the scent cues. This let's us experience the world as Daredevil for a moment: we see vague radar sense silhouettes and smell symbols and from this we can "visually" identify people. Which is pretty great comics. 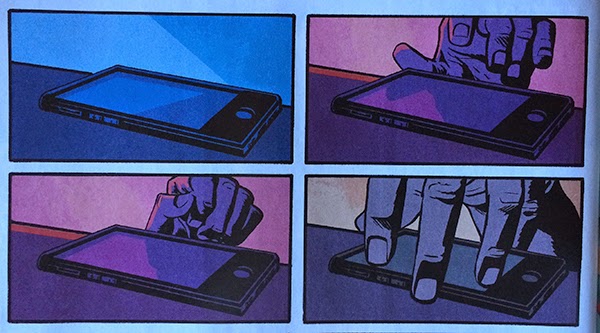 This sequence of panels here absolutely guts me. Now a big part of this is the context: Daredevil, Matt Murdoch, is depressed and given his long past with despair and his history of trying to tough it out, so him reaching out and actually asking for help is a HUGE moment. An act of profound bravery from The Man Without Fear. But this sequence is also remarkable for how beautifully it is executed. The simple framing and focus on the phone, heavy with its permanent promise of communication and outside help, really soldifies it's importance. THIS is a lifeline. The way the hand tentatively appears, pulls back, and then grasps the phone is amazing comics. To get that level of emotion from just hand gestures is really fantastic character work. And then there are the colours: a cold blue of isolation in a darkened room, then the introduction of dramatic red as the hand dithers about reaching out for help, and finally true colour as the hand reaches out for help and breaks through the blue murk of isolation. This is fantastic comics delivered with deceptive simplicity. 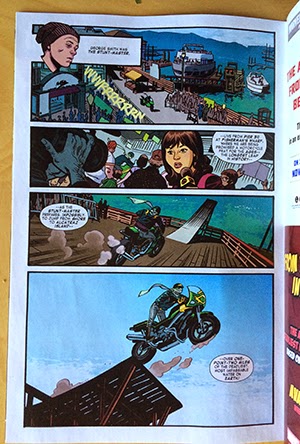 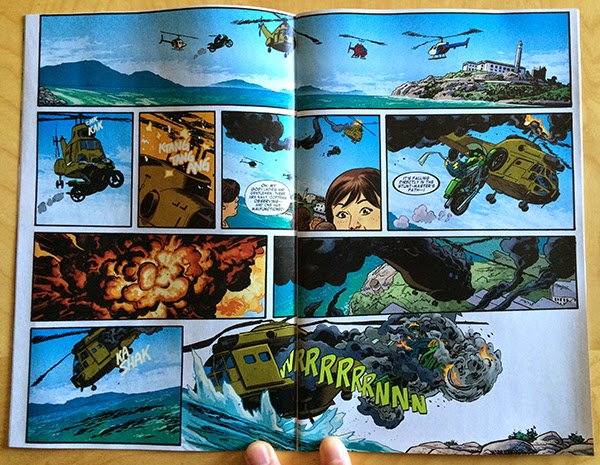 Daredevil #11 makes the quietly brilliant choice of having Daredevil face off against an actual daredevil, Stuntmaster. As a result, a key feature of this issue is motorcycle stunts! Now, motorbikes jumping things is a very movement based phenomenon, so translating the excitement and drama of these kinds of stunts into a static medium takes some smart choices. The most simple and fundamental of these choices is how page space is used to quickly create a sense of distance. In the above sequence Stuntmaster guns his bike towards a ramp for a jump stunt on a normal single page (one made even narrower seeming by the ad insert). A page turn follows and suddenly the page gapes with horizontal space in a bike jump that spans the complete width of the comic. The sudden contrast between the normal width panels leading up the jump and the wide, short panels, particularly the first double-page wide one, of the airborne motorcycle capture the distance, drama, and excitement of the motorcycle stunt. It's elementary stuff, but it is really effective. 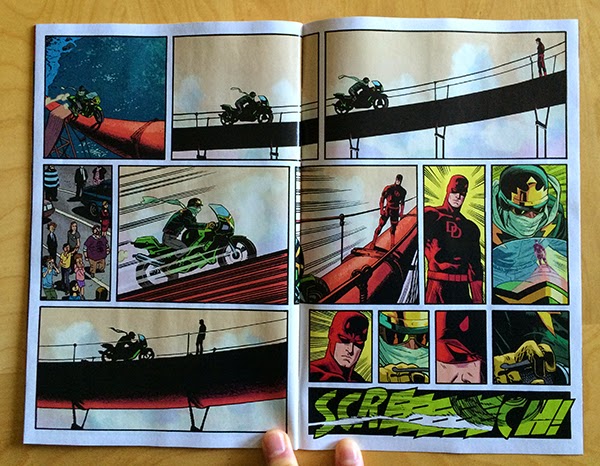 Daredevil #11 uses this double-page spread approach again to make another, even more dramatic stunt come to life on the page. In this sequence Stuntmaster plans to ride his motorcycle across the suspension wire of the Golden Gate Bridge defying death and common sense. Daredevil, who has been called out by the motorcycle daredevil, shows up to prove his mettle and have a talk with Stuntmaster and plays chicken with the stunt rider. This layout does a fabulous job conveying this story. The top row of panels uses the width of the page to really emphasize the scope of the stunt and the forward progression of Stuntmaster along the suspension wire. This row of panels is also pretty nifty in the the wire forms a clear vision guide that draws the reader quickly, like Stuntmaster's progression, from low left to top right where suddenly there is a Daredevil.  Another interesting aspect of this layout is how panel size is used in the lower portion of the page to amp up the tension. In the second row of panels we see the focus of the panels swap back and forth between Stuntmaster and Daredevil and narrow as the two come together. It creates a sense of increasing focus, proximity, and danger. In the bottom row of panels we see this construction repeated with a wide establishing shot of Stuntmaster and then a series of even smaller, more focused panels which swap between the characters. These tighter reaction panels, when contrasted with the larger ones in the previous row, feel even faster and create even more focus, a greater sense of proximity, and even higher levels of danger. Which brings the sequence to a dramatic head and the wonderfully long and drawn out SCREEEEECH! of the motorbike applying the breaks and skidding to a stop. It's a stunt brought together perfectly.

Daredevil is just so reliably excellent.