Or the use of cinematic lighting in Velvet
by Ed Brubaker, Steve Epting, Bettie Breitwesier, Chris Eliopoulus; Image Comics 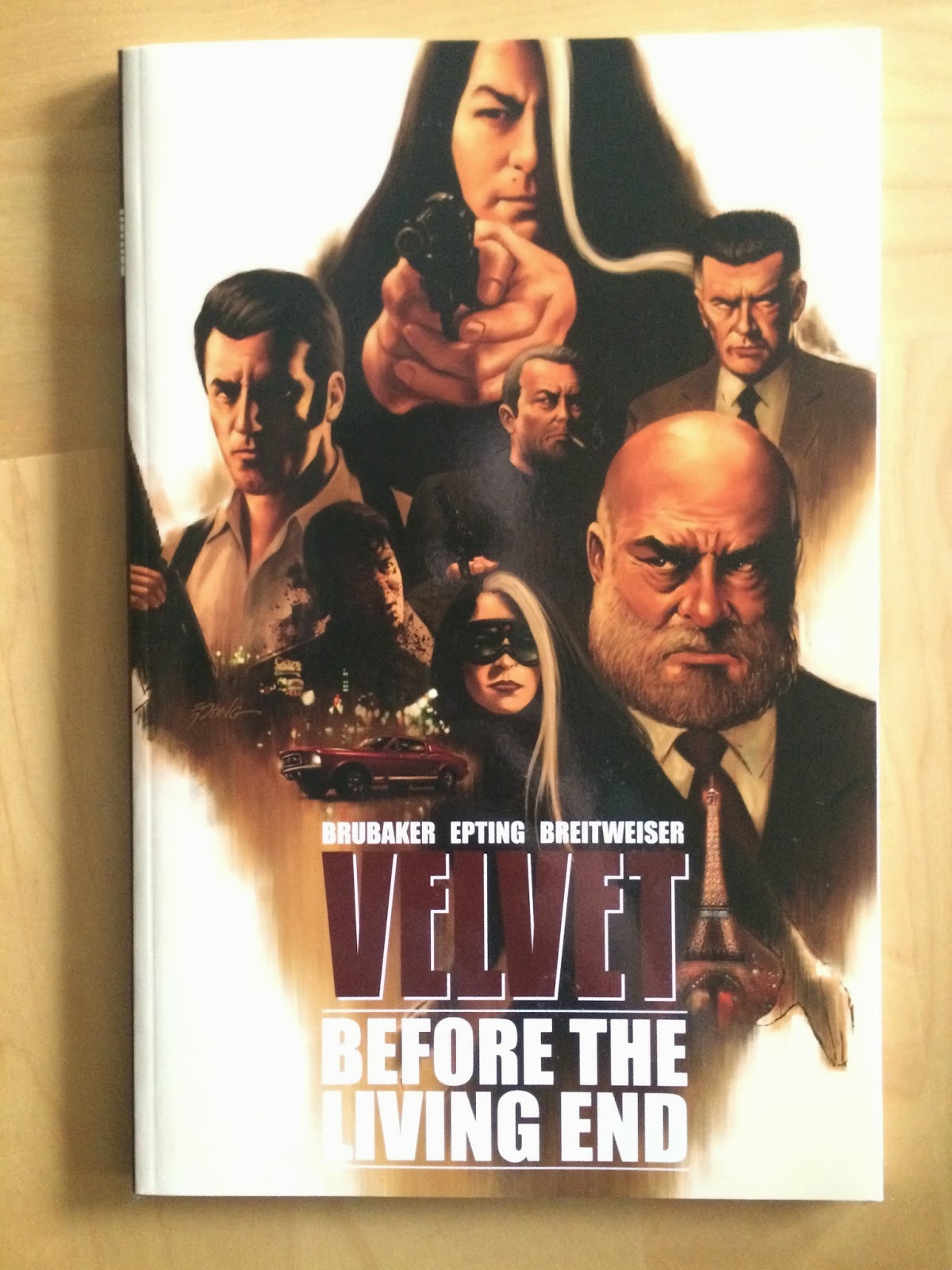 Velvet is a comic built out of cinematic espionage cool. In the comic, Velvet Templeton is the confidential secretary for the director of super-secret espionage group ARC-7. When a field agent is killed Velvet is implicated and forced to flee from her erstwhile colleagues. Which reveals a secret: Velvet, the middle-aged secretary, might be the finest secret agent alive. It's a thrilling comic that plays with familiar espionage tropes, subverts sexist expectations, and examines the neglected women of the espionage genre. It's pretty great.

It's also a comic done in a really interesting cinematic style that combines photo-realistic drawings with the colour lighting of vintage film.

While I love the total look of Velvet, I find the aspect I most want to explore is the colouring. Velvet has a very painted style that makes heavy use of light and shadow which I think helps sell the cinematic feel of the comic and create this wonderful sense of reality on every page. It looks really good and works beautifully with the pencils and inks to create a really effective comic.

Which is somewhat weird for me: I usually prefer simplified flat colours to the elaborate painting of Velvet-style colours. Flat colours, particularly when married to simplified colour palettes reduce the amount of stuff the reader has to process and often makes the reader focus more on the nuances of the line art and inking. Which can really help make a page feel more kinetic and animated. Add in the emotion that can be generated by carefully curating the simplified colour palette and flat colours can really work in the background to enhance the final comic. The case that Velvet makes is that rendered, highly detailed colours can look just as good as the best flat colours and can be involved in some pretty nifty storytelling.

In this post I want to explore some of the cool, cinematic effects that arise form this style of colouring.

There will of course be *SPOILERS* For Velvet Vol. 1. 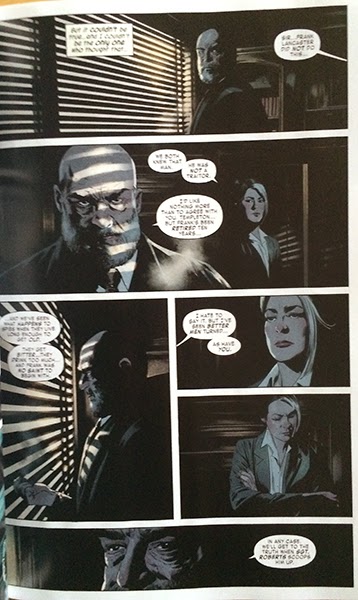 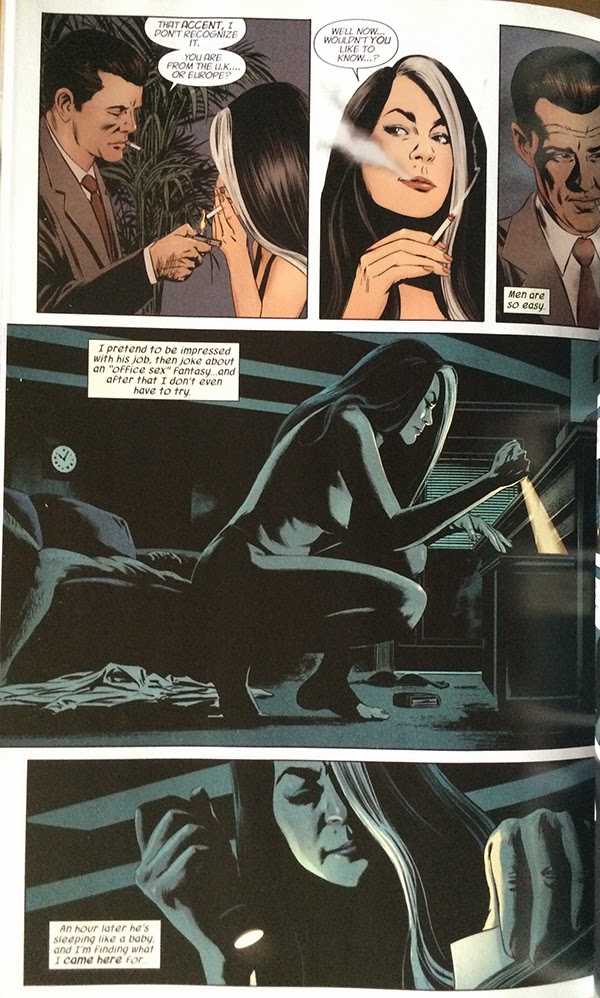 One of the greatest advantages of this kind of painted style is how it deals with darkness. In the real world we are very seldom in true, total darkness. Instead we are usually close to some faint, residual light source that partially illuminates the murk providing highlights, brighter areas, and soft, deep shadows. This is particularly true in film where the very nature of the medium requires a certain amount of light to make the cameras work. The painted style of Velvet depicts this perfectly: painted highlights replicate the glow of the light source and then transition smoothly into the judicious black of the inks. It's a look that creates an organic sense of depth to the darkness that feels at once very authentic and very cinematic. Which works splendidly to create the atmosphere of standing in a darkened, shaded room or prowling naked through a lovers belongings while they sleep. It's great comics that can't be accomplished as well in a flatter colouring style. 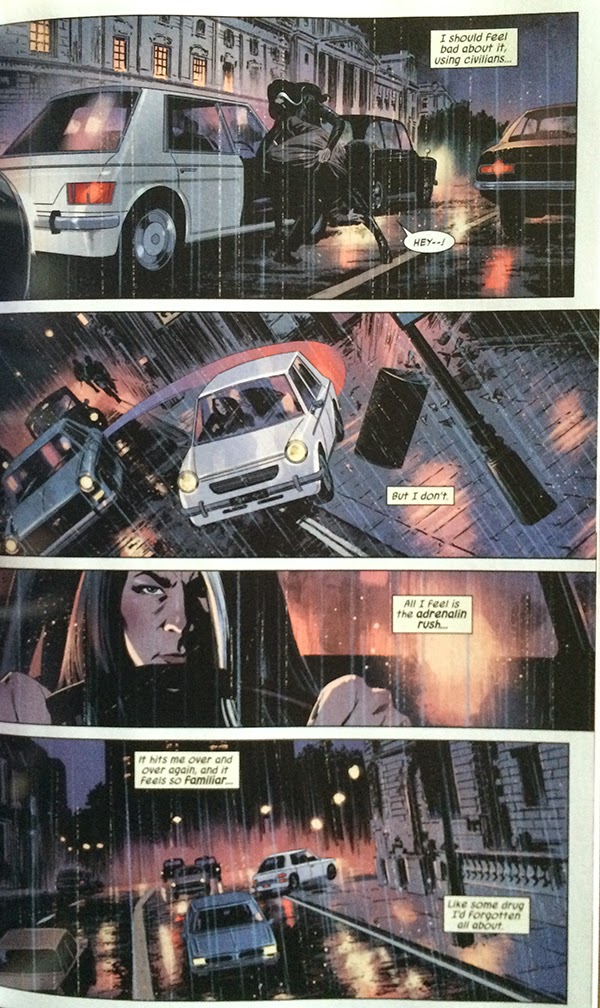 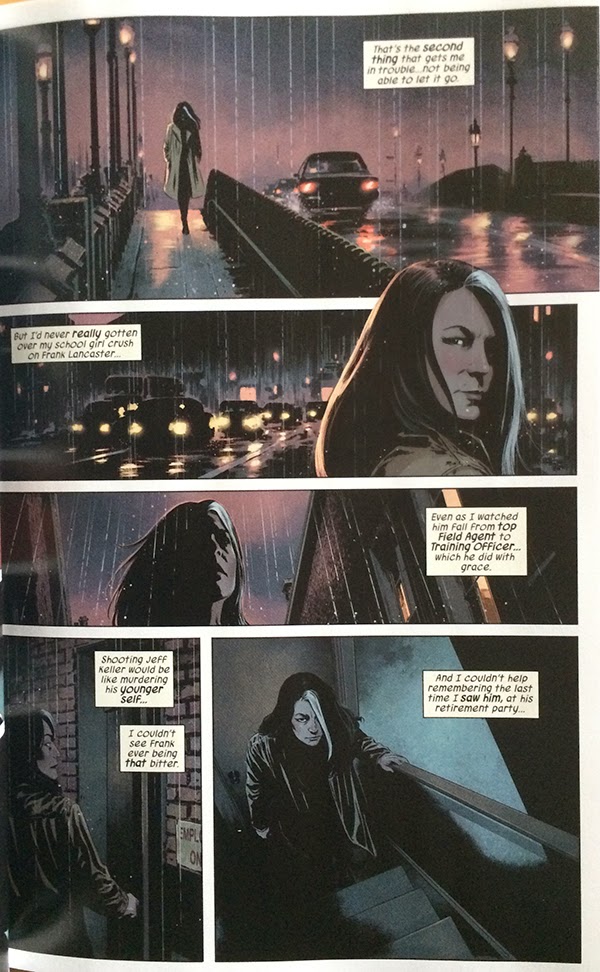 Velvet's painted style shines through even more when depicting rainy London nights. If urban darkness is defined by light sources, then a rainy night is defined by reflective surfaces. When it rains every wet surface becomes a mirror for surrounding light sources and rain droplets themselves can act as refractive points of light. So making an exciting looking rainy night is all about depicting light in accurate and dynamic ways. Velvet's masterful use of light highlights and wonderfully painted reflections absolutely nails the look and drama of a rainy evening. Which, when viewed in contrast with more conventionally coloured comics, helps set Velvet apart as a cinematic experience. This is also something that painted-style comics can do that flat comics can't; it's pretty amazing stuff. 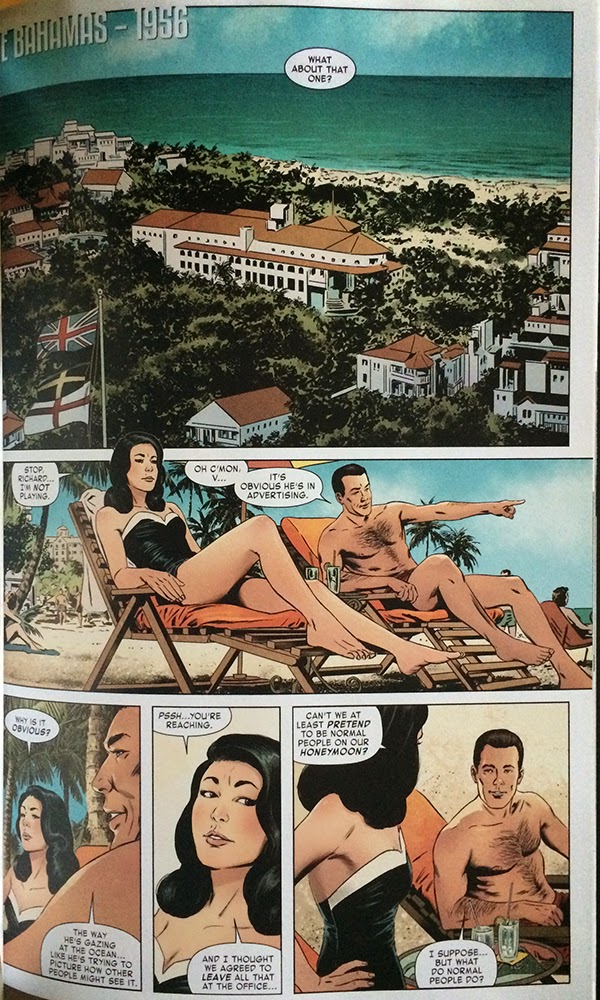 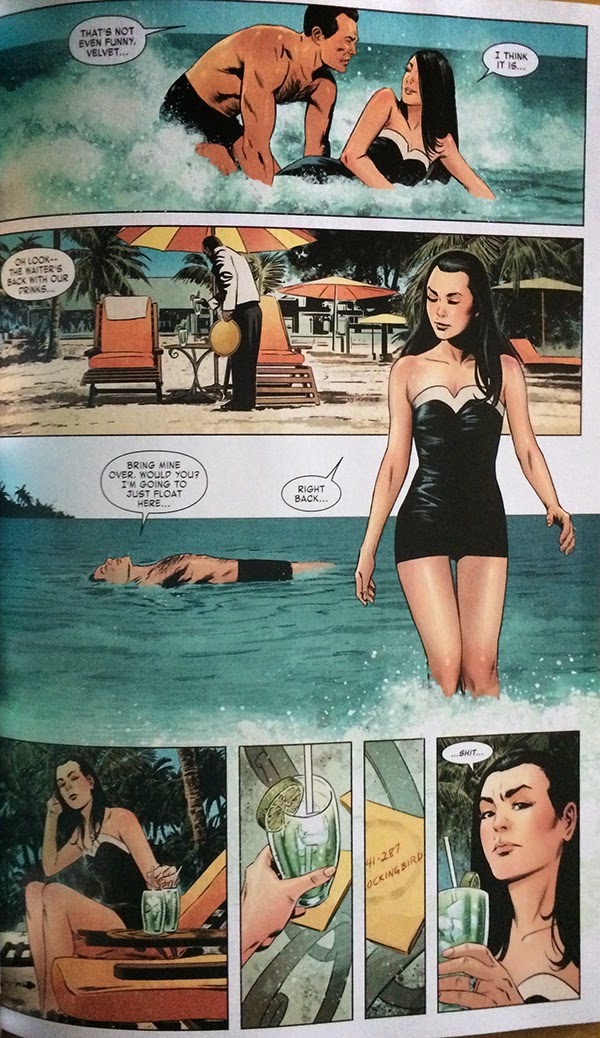 Another scene that I thought Velvet did especially well was a flash back at a beach resort. The way the colouring captures the suffused glow of tropical sunlight is pretty great. In my limited experience, visiting equatorial places comes with a certain light quality that is quite different than the sunlight of my native Canada, and Velvet absolutely captures this. Velvet also does a really good job depicting the way light interacts with water, and the spray of waves: I am absolutely transported to the beach. This scene is another really great example of just how masterfully light can be used in comics. 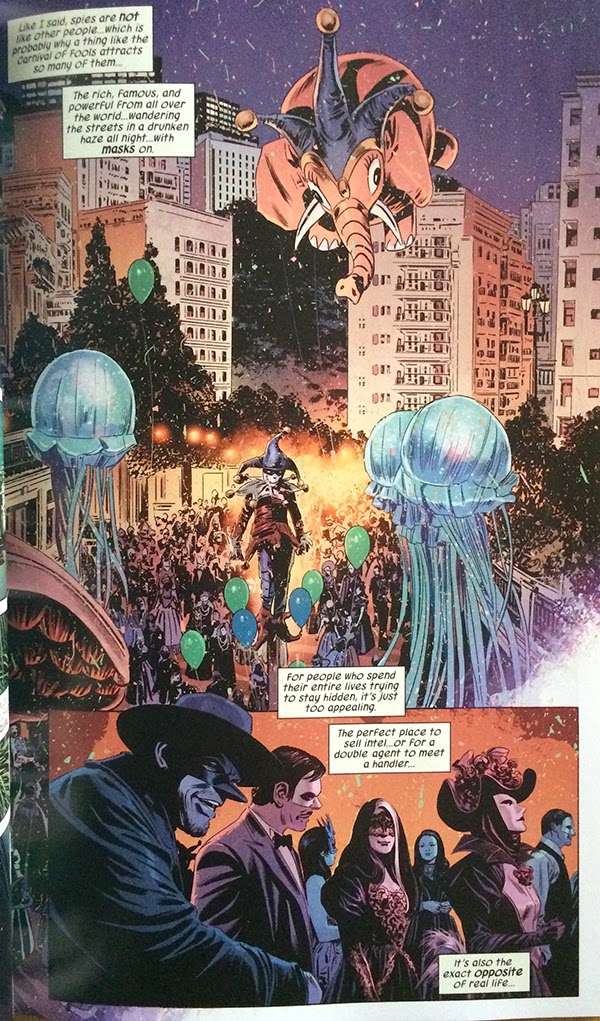 Velvet is a great comic for many reasons, from the genre and gender convention challenging story to the evocative pencils, to the vintage cool. It is completely worth checking out just as a comic. But, if you are a comic wonk like me, this is also a comic worth reading to see how the inks and colours work together to tame light and how effective this can be in storytelling. While I might usually prefer flat colours, Velvet really makes a case for how special painted-style comics can be when they are done really well. Because the results are gorgeous.

Previously:
So I Read Velvet Vol. 1