Exposing The Secret Avengers #10 and #11

Or a look at the exciting layouts in Secret Avengers #10 and #11
by Ales Kot, Michael Walsh, Matt Wilson, and Clayton Cowles; Marvel Comics 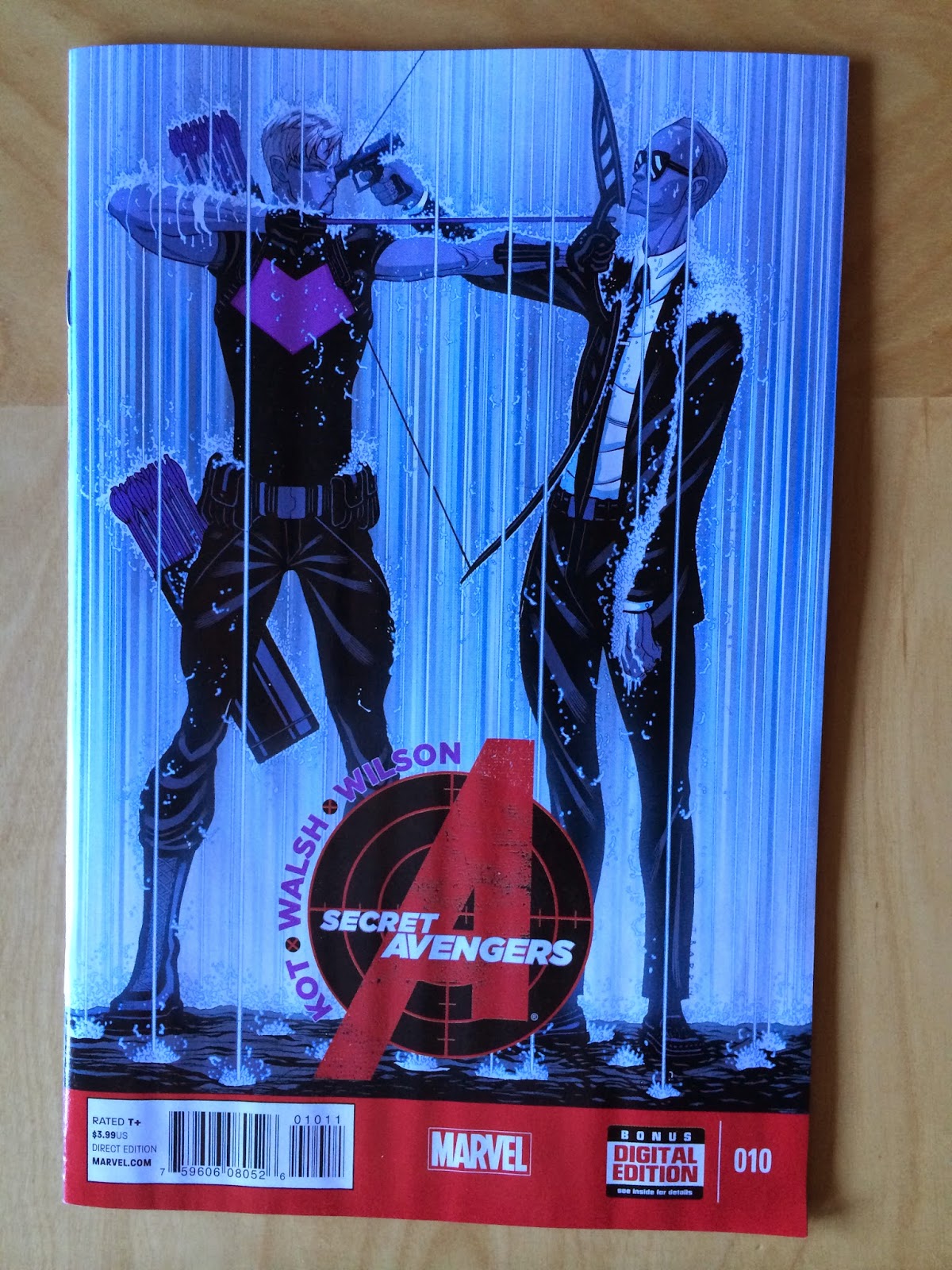 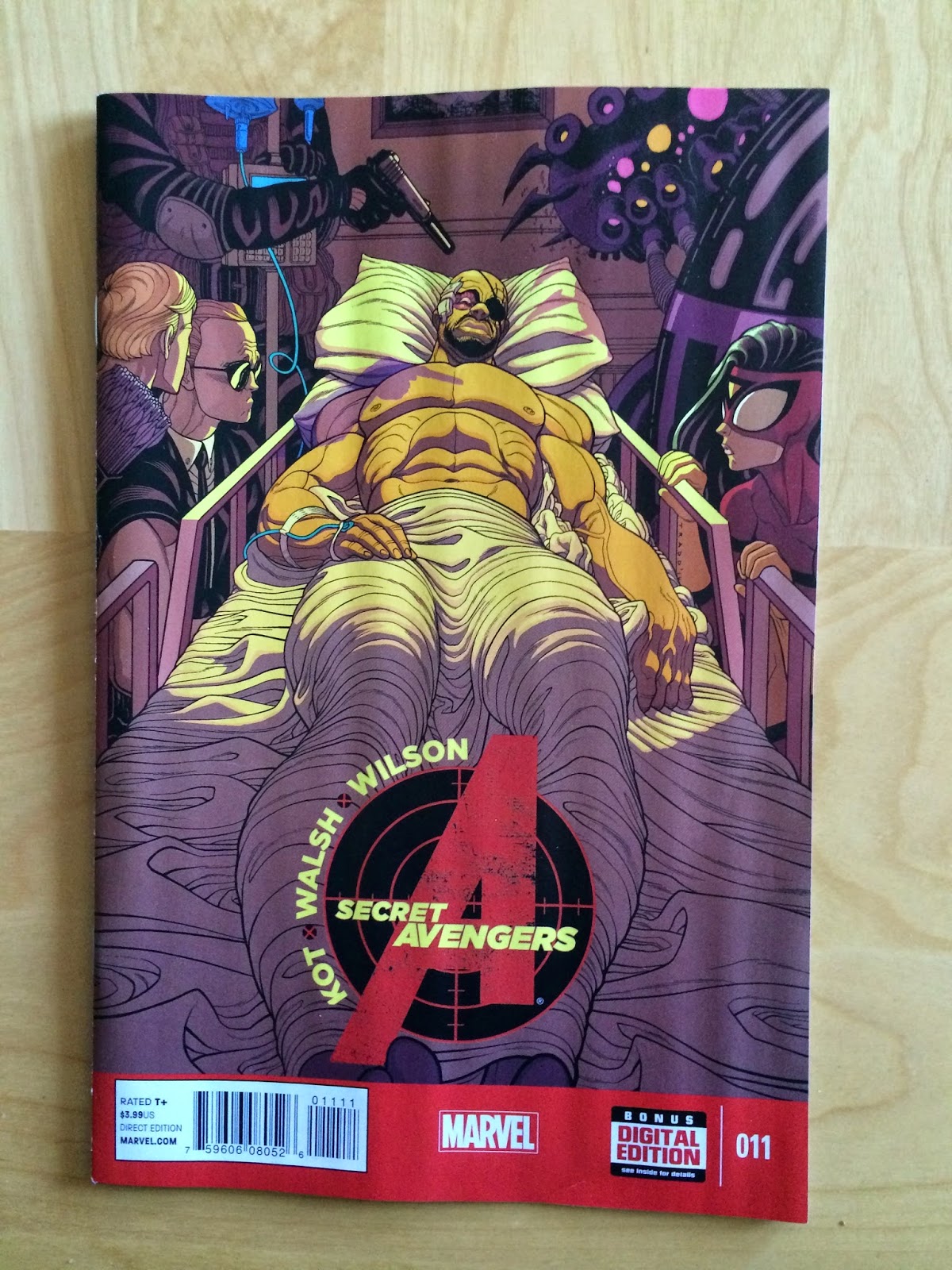 Secret Avengers is such a good time, with it's slow burning tale of betrayal and love and dire extra-dimensional threats to reality. And hijinks! So many hijinks! It is a comic that balances compelling, warped espionage stories with delightfully absurd humour and rending sincerity to create really enjoyable comics.

Secret Avengers is also a comic that often features some really interesting layouts and splash pages that use unconventional story-telling in interesting ways. And I'd like to show you some. 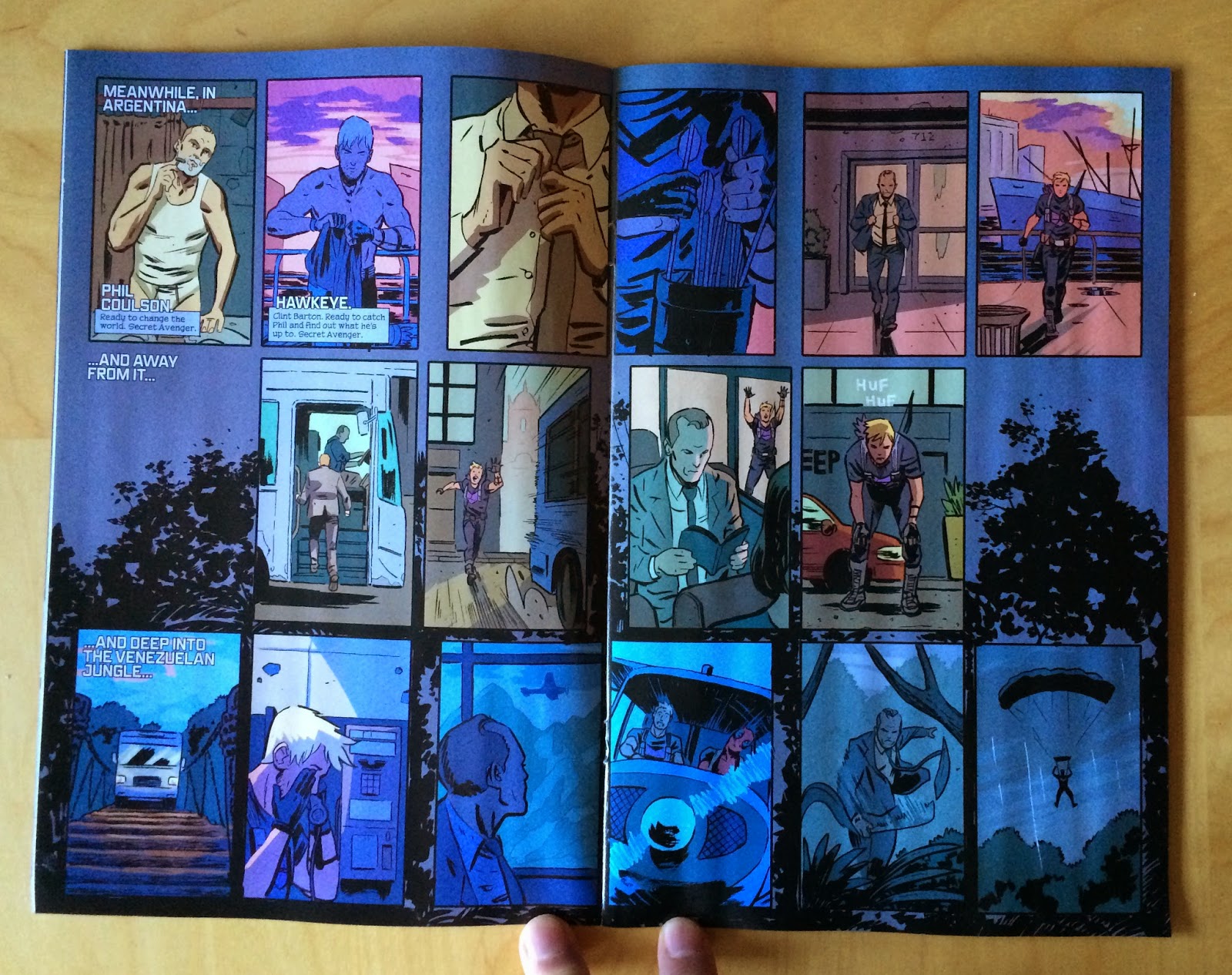 This double page spread from SA #10 is just kind of quietly wonderful comics. The story of the page has Agent Coulson, AWOL, travelling from the city where has been living into the jungle and Hawkeye pursuing him. The pages basically tell the story of two characters travelling from point A to point B. What I like about this layout is that it depicts both characters journeys simultaneously, in alternating, interspersed panels. What this does is allow the characters to play off one another and sell the idea the pursuit component of the story. In the first row of panels we see the two characters preparing and setting out on their journey in directly parallel panels, which establishes that both characters are starting the pursuit from at the same time and from a similar point of preparedness. It also puts them on seemingly equal footing, setting up the comedy of the page. The second row of panels is where the two characters have their paths intersect in alternating panels: Coulson gets in the bus and Hawkeye, being a total futzzing goof, misses the bus. The alternating panels here let us experience the comedy of Hawkeye's frantic screwup and Coulson's quiet ignorance of their near encounter. The final row of panels depicts both characters actually getting to their objective. Here the interspersed panels show Coulson's conventional journey and Hawkeye's amusing Deadpool-airlines gambit. Which makes for a fun contrast. Critically the interspersed panels have sufficient crossover, with Coulson spotting Hawkeyes plane, to help keep the chase elements of the scene feeling important. This page is basically a nifty take on two travel montages that allows for a frantic feeling pursuit and maximum comedy. It's pretty great comics. 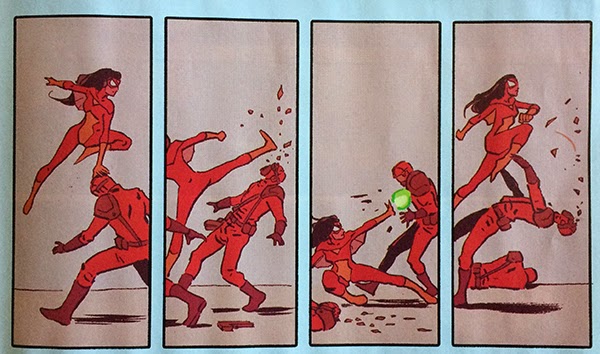 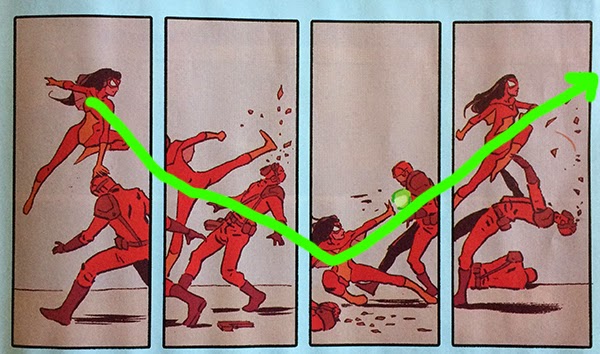 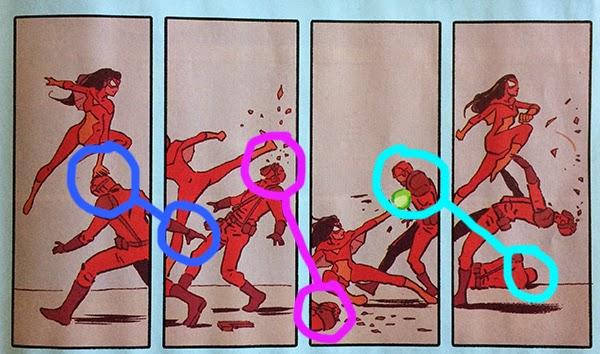 This sequence from SA #11 I find endlessly fascinating. It's a very simple seeming sequence that manages to convey a lot of overlapping information in an effortless manner. The story of this row of panels is very straightforward: Spider-Woman mauls her way through a group of henchmen while racing to the aid of the captured Maria Hill. What's really cool about this sequence is how fast and impactful the sequence feels. Often speed and impact feel somewhat at odds with each other: fast sequences are usually about ease of navigation while impact often plays with techniques meant to slow the moment of impact and make it feel weightier. This sequence manages to do both at the same time.

The sequence manages to feel very quick because it has an obvious, simple reader guide shape: all of the action on the page and Spider-Woman's motion make a very clear V-shaped down and up path that can be quickly navigated. Add to that the focus of the composition: the action is pared down to the key moments without any distracting background details. This helps the reader navigate the sequence faster. What's particularly cool about this sequence is that without background the forward motion is completely due to how the characters move across the page and the trail of injured goons acting as horizontal distance markers. This provides all the needed spatial information without adding extra details. This sequence is a lesson in comics efficiency.

The impact of each blow in the sequence, meanwhile, is enhanced by the fact the motion of Spider-Woman doesn't quite sync up between panels. While the overall flow of her progress through the page is very clear, the way she goes from leap to kick to shock to knee-to-the-face is just a little vague and disjointed, which makes every moment in the composition stand out and each blow feel weighty despite the speed of the sequence. This aspect of the page is enhanced by the way Spider-Woman is partially clipped by each preceding panel which helps break up the details of her movement. The impact of this sequence is also emphasized by the colouring. Everything in this row of panels is coloured bright, dangerous red while the rest of the page this sequence resides in is in normal full colour. It makes this sequence stand out and feel more important and violent regardless of the action depicted. Combined these aspects of the sequence manage to really hammer home the ferocity of the action without greatly slowing down the speed of the composition. Which is great stuff.

Another thing that Secret Avengers really hammers home for me is just how *sincere* a comic it is. For being a comic filled with absurdity, comedy, lies, and hijinks it's also a comic that absolutely bleeds sincerity. Characters absolutely, ruthlessly believe and unrepentantly have feelings. For a while now I've been trying to pin down what exactly it is about Secret Avengers that I like so much, and I think it's this sincerity that elevates the whole comic above its remarkable constituent parts. I believe.

And sucks to irony and snark.