I went into the year with goal of reading a book a week and hitting the very DC comics number of 52 novels for the year. I managed to read 56 novels in 2014. (The trick, if you are curious, is to work in a place surrounded by very expensive housing that is really inconvenient to get to and reading on the lengthy metro/bus commute.)

The books in a particular order are:

In my comics year end post I take a survey of genre to point out that Mainstream comics are overwhelmingly comprised of one genre which is weird and reflective of some pretty bizarre market forces/publishing decisions. So I thought I would put together a genre distribution of novels, which have a much broader range of genre (books can be literally anything!). And this is what I got:

So... it seems that like Mainstream comics I am all about the one genre because I am a fantastic nerd. (Maybe my issues with Mainstream comics being overwhelmingly Superheroic is just based on the fact I want more Science Fiction?)

So I thought I would do the normal New Years thing and actually make some sweeping recommendations for novels, since my reading habits are basically powered by suggestions.

Before I get to my recommendations, I feel like pointing out that all of the books I read this year were pretty great and the experience of finding the perfect book is super personal. If I knew you, dear internet reader, I would recommend a specific book tailored to your interests. But since I have no idea who you are or what you like, I'm going to suggest some books that I think could be enjoyed by basically anyone.

I would recommend The Quantum Thief by Hannu Rajaniemi. This is a book I saw on a bookshelf a bunch of times but, due to a cover and title that could go either way and dust cover copy that sounded pretty schlocky, I gave it a pass. But the thing is, The Quantum Thief is kind of perfect: it's whip crack smart, beautifully written, and an elaborate jigsaw of wildly different literary elements all perfectly balanced in a story about a gentleman thief in a post singularity future. If you are into Science Fiction you really ought to try this book. And also don't judge books by their cover and copy....

(Honestly, if you are into Sci-fi, Accelerando, a modern classic, or The Accord a very, very underrated novel would also be ace choices. They were rereads this year, and The Quantum Thief was just such a fantastic surprise.)

I would recommend London Falling by Paul Cornell. Fantasy is a genre that often leaves me a little cold: it can frequently be very formulaic and Tolkien derivative, too deeply, deeply creative, or kind of silly and unconvincing. London Falling is original, mature, and brilliantly, horrifically convincing. London Falling is about a misfit group of Police tasked with solving a horrific murder which brings them into contact with the terrifying shadow world of Supernatural London. It's fantasy that I think diehard fans of the genre will like but should also appeal lapsed Fantasy fans looking for something more substantiative. 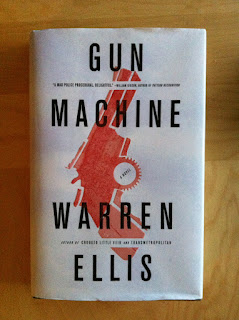 I would recommend Gun Machine by Warren Ellis. In Gunmachine a New York detective stumbles into a room full of guns, infamous guns, each tied to an unsolved murder launching a hunt for New York's most elusive serial killer. It's a novel that is chilling, properly tense, inappropriately hilarious, and written in a beautifully evocative style. It's a satisfyingly intricate read that is still quite accessible and is maybe the book with the most universal appeal that I'm recommending here. Check it out.

I would recommend Soon I Will Be Invincible by Austin Grossman. Although I didn't technically read this book during 2013 (I did review it), it is pretty much the perfect book for comics fans. It tells the story of Doctor Impossible an evil supergenius that will take over the world, for real this time, and Fatale an outsider cyborg who suddenly finds herself among Earth's mightiest heroes. It's a super fun story that works both as a grand sendup of the Superhero genre and a loving, detailed analysis of how the genre ticks. It's an essential novel for any Superhero fan and also, in my experience, a book that even non-geeks can really enjoy.

I would recommend A Fistful of Rain by Greg Rucka. Thrillers are another genre I have had my ups and downs with, what with the might-makes-right attitudes and frequently formulaic plots. If you are a reader who likes nuance and quality writing than Greg Rucka is the Thriller writer for you. The man is a craftsman, building efficient, exciting stories that are clockwork machines of action, suspense, and intellectually mature stories. A Fistful of Rain is, I think, my favourite of the many Rucka novels I've read this year. It tells the story of Mim Bracca, the lead guitarist of the rockband Tailhook, as she finds her life crumbling as her alcoholism and broken past converge with a blackmailer's plot to ruin her. As Bracca hits rock bottom, she will do anything to protect what's left of her life. It's a properly tense novel with a great mystery and a really intimate, really brutal character study at the story's core. A Fistful of Rain, beyond being a good book is a really surprising and non-formulaic approach to a Thriller. That said, pick any Rucka novel and you will not be disappointed.

Have any recommendations for me?
Posted by Michael Bround at 08:00