Or a look at character design as storytelling element in Spider-Woman #5
by Dennis Hopeless, Javier Rodriguez, Alvaro Lopez; Marvel Comics
and a character redesign by Kris Anka 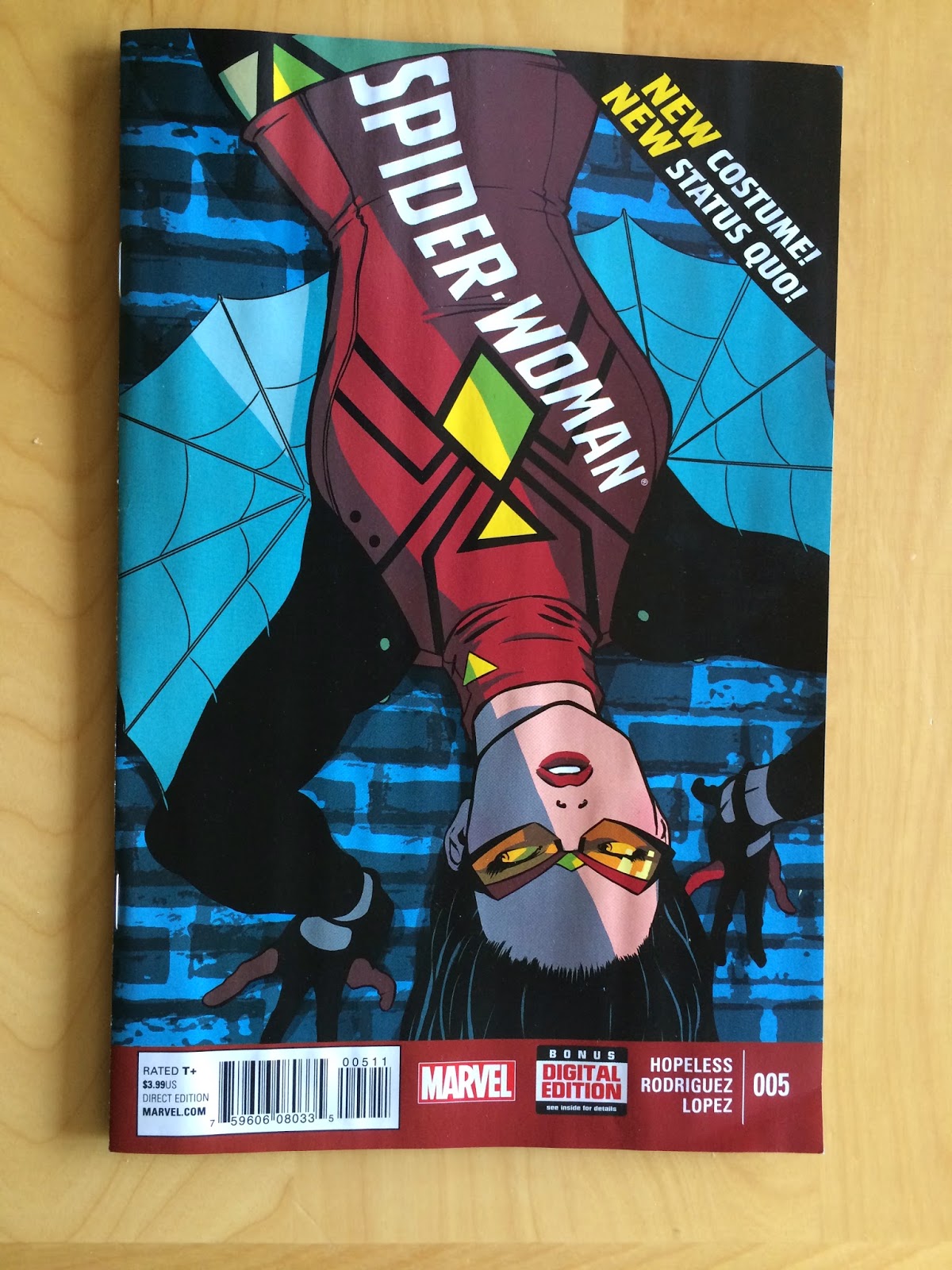 I have a few rules about buying comics. I try not to buy tie-in comics to events I wouldn't otherwise be reading because comics are expensive. I do not, ever, read comics drawn by Greg Land because I know from experience that I don't enjoy his style. So Spider-Woman #1-4 being a tie-in to Spider Island Verse and featuring Land interiors was not a comic I was very interested in reading. But a comic drawn by Javier Rodriguez featuring an under-utilized character with an interesting new status quo that sees the title character as a down-on-her-luck private investigator? That is more like it.

Spider-Woman #5 is also the first issue featuring Spider-Woman's new Kris Anka designed costume. A costume, I'll confess, that I didn't immediately take to. This might be a matter of perspective or privilege, but I actually kind of *like* the classic Spider-Woman red and yellow unitard. I understand that in the hands of a pervy artist the skintight outfit can be pretty exploitative, but better artists will draw the classic costume as clean-lined activewear that I don't think looks out of place among the other Avengers. Basically, I like how the classic outfit looks like a superhero costume. Which I think was my initial problem with the redesign: it adds a lot of extra detail and mostly looks like ordinary clothes. With no other information, I thought it looked nice and practical, but was maybe not the right solution to giving Spider-Woman a modern super hero costume.

After actually reading Spider-Woman #5 and seeing that Jessica Drew has quit the Avengers and is looking to be a street level crime fighter and PI, it is immediately apparent that her new costume design is perfect. The extent that the new outfit looks like street clothes is a feature of the design and provides an immediate visual statement about Jessica Drew's role in the story. It's really smart stuff and further evidence that prejudging creative decisions before actually seeing final products is pretty dumb.

Another thing that struck me immediately after reading Spider-Woman #5 is just how dynamic the heavy black limbs of the redesign are.

Allow me to explain. 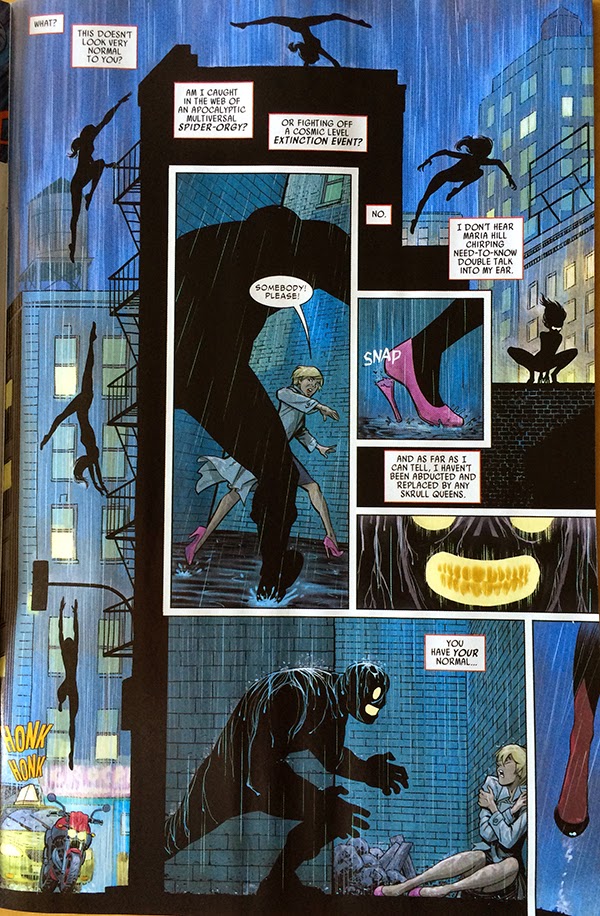 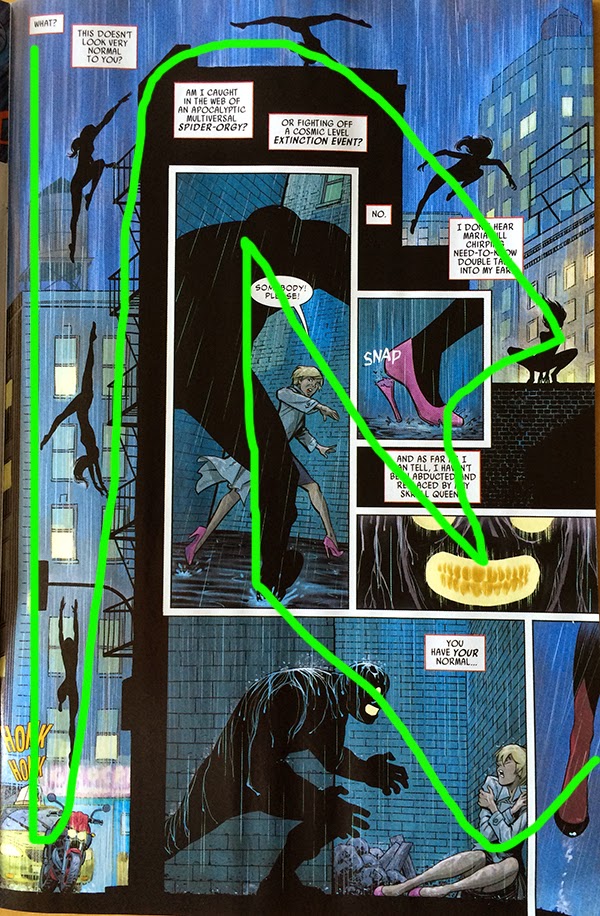 Actually first I just want to gush about the storytelling in Spider-Woman a little. This page here is my favourite example of what Javier Rodrigues brings to collaborations: there is an unusual page design that effortlessly builds up the emotion of the scene. In this case the magic of the page is the very unusual order and flow of the action. We enter the page on the top right corner glance down to see Spider-Woman's motion begin and follow her silhouette up and over the page which lets us experience her rushing to the rescue. It also leaves the centre of the page to be explored in the best order possible: our eye path pinballs through the middle panels encountering the broken show, the grinning monster face, the fiend towering over the woman and then approaching her as she cowers until finally we see Jessica Drew spring into action and into the next page. It's the perfect order of images to capture the motion of the protagonist and the scene of a woman being cornered in the alley by a monster. Great comics. 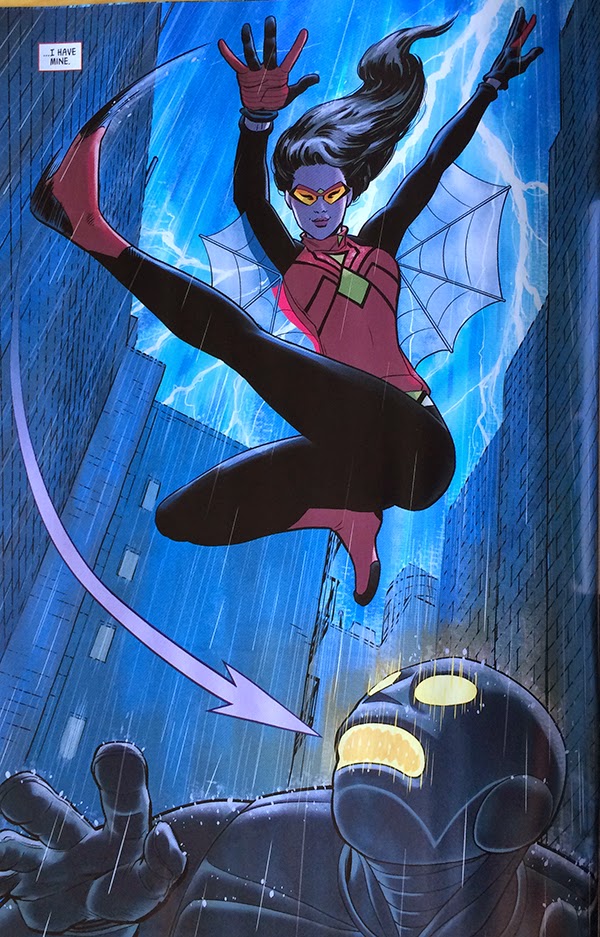 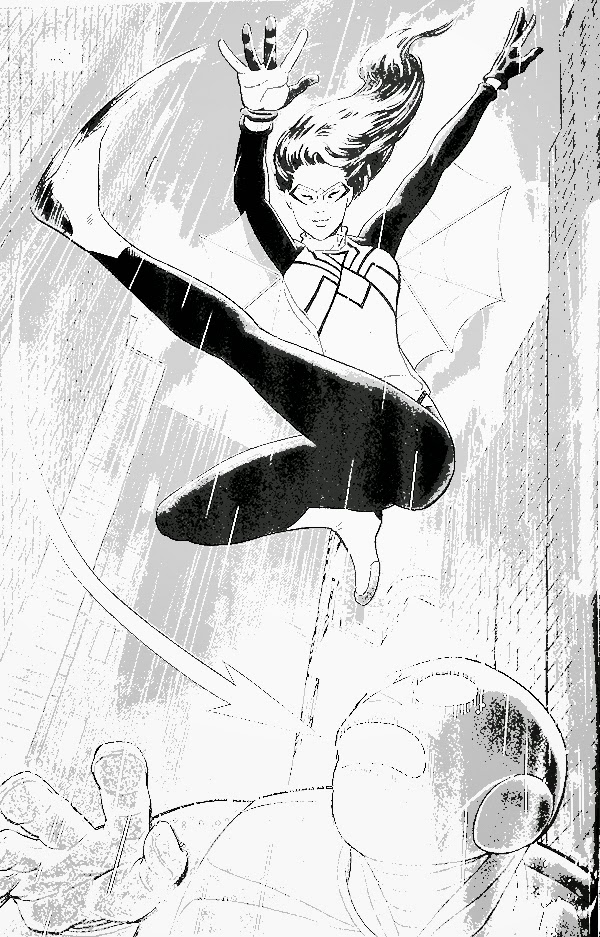 On an initial viewing, Kris Anka's redesign seems to be great because of its practicality or story-relevant street-level fashion sense. And, well, it is. But the thing is, I think the best aspect of the costume is actually something more mechanical than that: the limbs of the redesigned Spider-Woman costume are heavy and black. In fact, these black limbs are the most solid part of Spider-Woman's body and, on most pages, the most solid part of each layout. As such, the arms and legs of the costume can draw a huge amount of reader attention. And, in the hands of Javier Rodriguez and Team Spider-Woman, this attention is translated into the design of the page to make for some really kinetic storytelling. 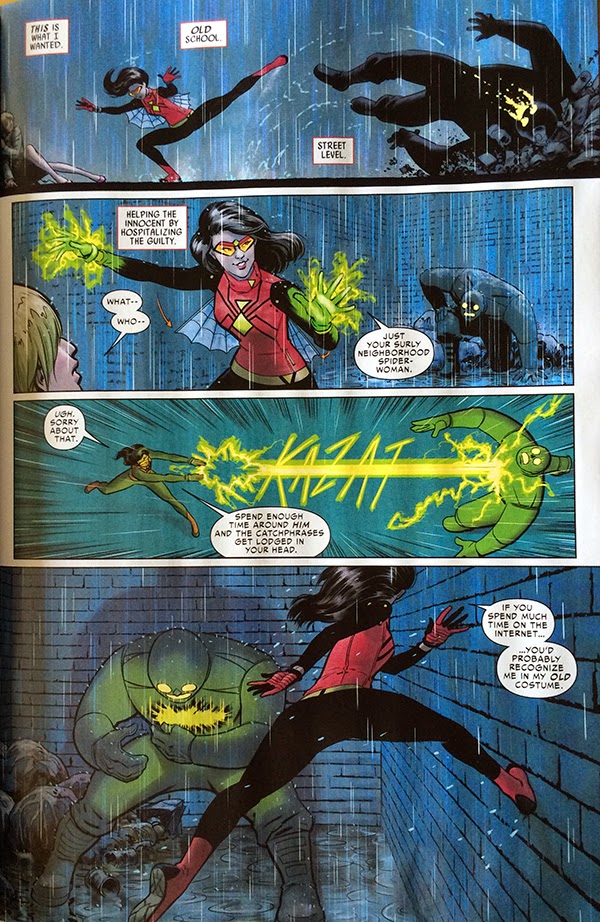 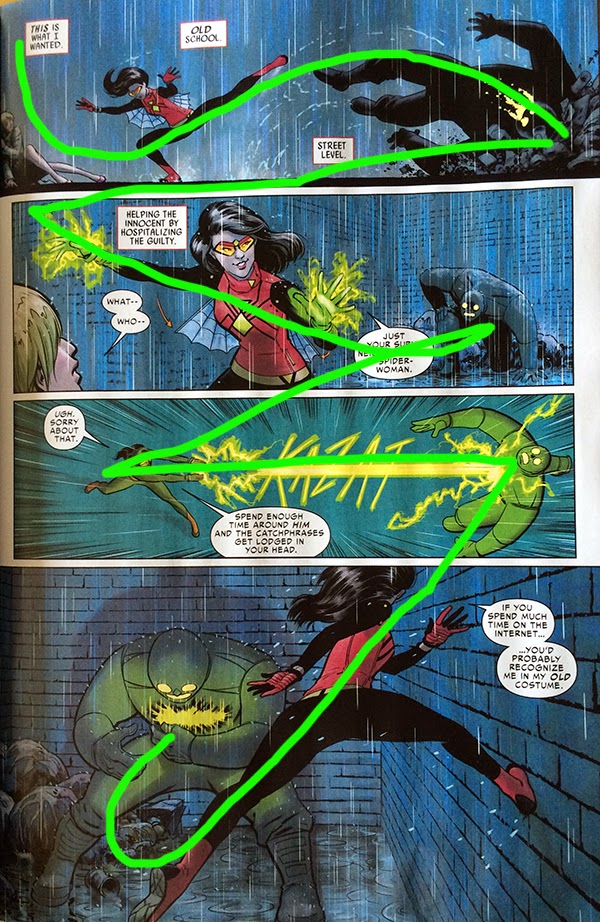 The basis for all of this are tangent lines. In comics, the artist can build in lines and shapes into the composition to steer the reader's eye around the page. The heavy black limbs of Spider-Woman's costume, particularly her legs, make *great* tangents and function to steer the reader through the action in the quickest, optimal path. Which is some clever comics.

In the above selection we see Spider-Woman's legs start the arch of the kick in the first tier, which caries through the water and black body of the monster-goon. In the second panel, Jessica Drew's black arms and the lettering quickly slant the reader diagonally through the page which queues up the next panel. In this panel the bright zap of Venom Bast works as a tangent and drives the reader quickly across the panel. In the final panel Spider-Woman's black limbs again work as guidelines to steer the reader across the panel, in this case backwards from the top right to the bottom left of the page. Which is some pretty cool stuff. 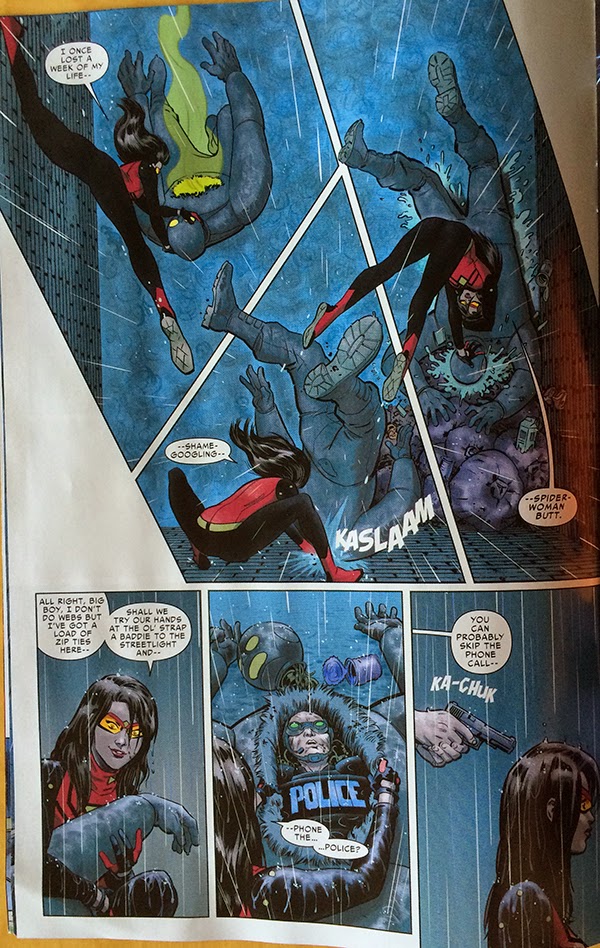 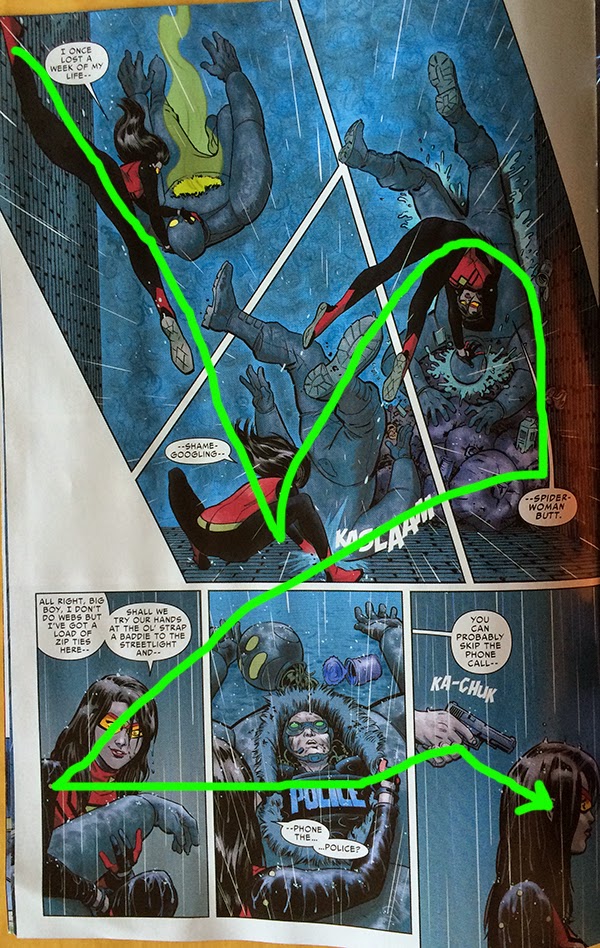 The next page of comics continues the action sequence and the use of legs as tangents. Coupled with slanted, kinetic panels, Spider-Woman's legs work to steer the motion through the page and give everything a very fast feeling. In the first panel, her legs are splayed giving a long straight line for action to move along. In the second panel Spider-Woman lands in a crouch which provides no long leg tangents. This briefly slows the reader and arrests her motion. Then, in the third panel, Spider-Woman springs into motion, again making her legs and arms into critical guidelines that completes the speedy sequence. It's such a simple intrinsic thing, since Jessica has limbs, but it really makes for clear, fast feeling action that is very easy to follow.

Which is yet another reason to celebrate the Spider-Woman costume redesign and a great new creative team.