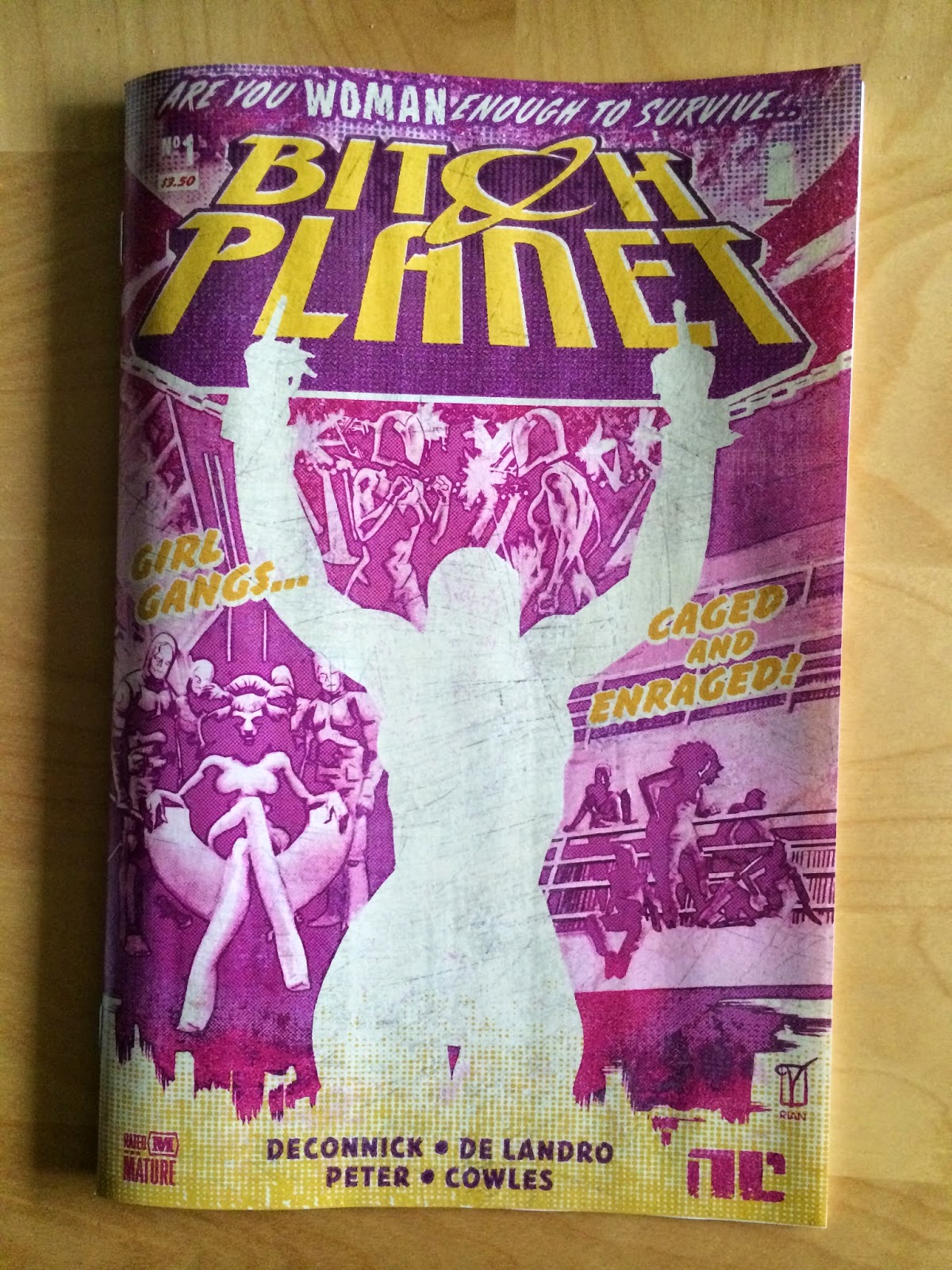 Bitch Planet #1 is such a good comic. It's another one of those comics I thought I'd try, enjoy, but ultimately decide to enjoy in trade paperbacks. But after reading the comic, I don't think I'll be able to wait. My expectations were blown away and Bitch Planet has my attention.

Bitch Planet tells the story of a penal colony in space where women who refuse to conform to society's gender roles, who are Non-Compliant, are sent to be punished. The audacious central premise of the series is a feminist take on women-in-prison exploitation movies... in space! The comic showcases DeConnick's amazing ear for dialogue and absolutely destroys the central Sci-fi premise of the comic. The first issue also really delivers on its feminist themes, grinding away at the patriarchy and portraying a remarkable diversity of realistic looking women and body types. This is a comic with a lot to appreciate.

But the reason that I am absolutely swept away is the art!

I expected the written elements of Bitch Planet to be fantastic, Kelly Sue DeConnick is reliably one of my favourite authors, but I wasn't sure how excited I would be about the artwork. I thought it would be good, but I wasn't expecting it to be amazing. And wow! Was I wrong! Bitch Planet has some of the best composition I've read in comics and maybe the best first page I've ever seen. This is not only a comic that is well written, but one with artwork to marvel at.

And I'd like to explore the opening page of Bitch Planet and explain why I think it is so fantastic.

There will be *SPOILERS* for Bitch Planet #1 below. 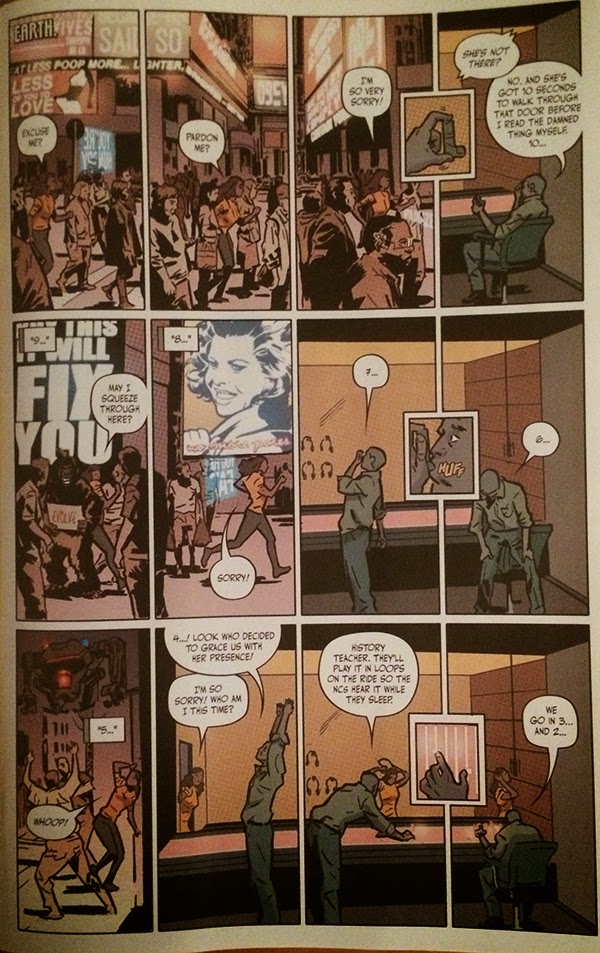 This is the first page in Bitch Planet, and it might be the best first page in a comic I have ever read. It encodes a huge amount of information about theme, setting, and the visual identity and energy of the comic in a very small amount of space. At the end of this page, I absolutely knew Bitch Planet was a comic I was going to be reading in issues.

The story of the page is at first glance, pretty straight forward. There is a woman rushing through a crowd and a man waiting for her in a recording studio who is very stressed about her running late. He finally decides that he will have to record the piece himself, but then the woman arrives in the studio. Of course, this story is layered with a bunch of other relevant information, but I'll get into that as we go. 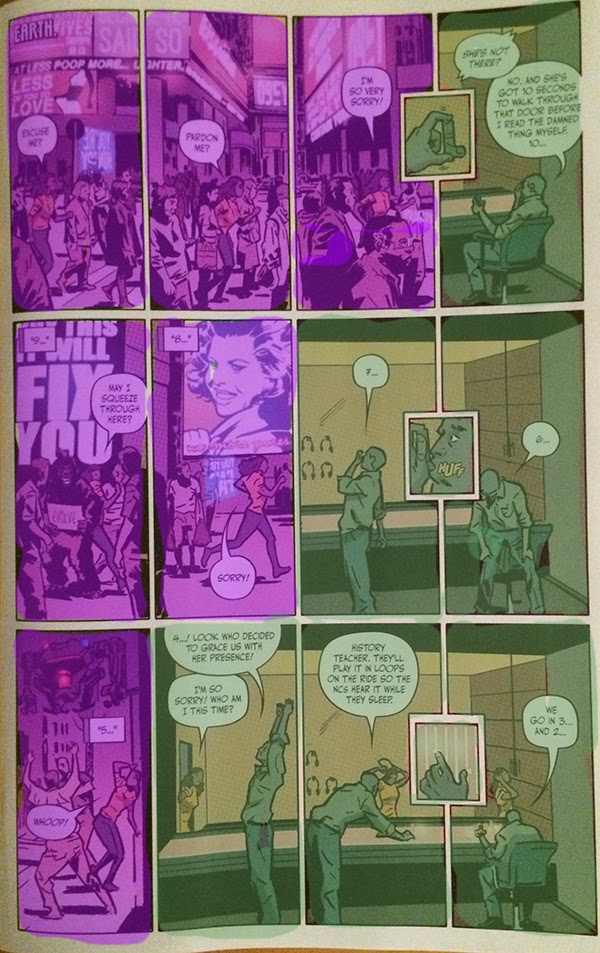 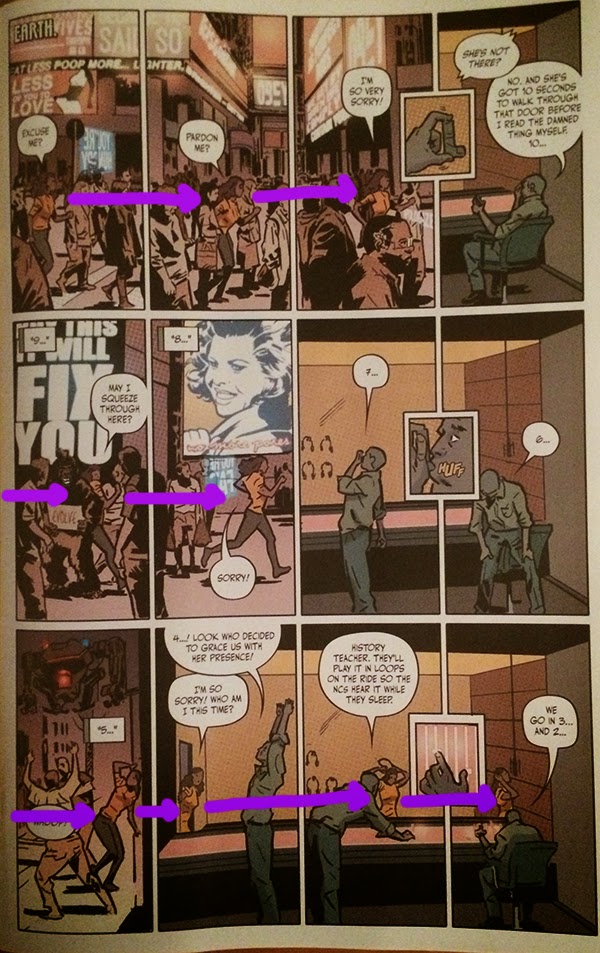 Form a pure storytelling perspective this page has a really interesting layout that does a lot of things to make for a kinetic and emotionally resonate page. At first glance this is a deceptively simple 12-panel grid page, with three extra little callout panels. But unlike a more conventional 12-panel grid which follows one character chronologically through space, this layout features two distinct settings with only a shared chronology. Basically, the events in the page take place in the order of the panels, but depict characters in two separate spaces. What's particularly cool about this page is how it is how the two settings fit together in the page: at the top we have mostly the street setting, but as we progress down the page, the recording studio setting gets additional panels per row, such that it slowly takes over the page. Which leads to a bunch of interesting things.

Part of why these interlocking settings are interesting has to do with motion. By staggering the settings this way, we see that the woman running late is always, well, running. In the top row she has three panels in a row to race along towards her destination and then in the bottom row, she has four panels to keep racing through as she enters the recording studio and rushes over to the mic. Therefore this layout really maximizes the horizontal motion of the woman and increases the apparent distance she travels. Which is pretty cool. This layout also enhances the motion of the man in the recording studio. As we progress down the page we see him go from static, seated, and confined in the top panel to being increasingly mobile and frantic looking; like the panel equivalent of increased pacing. It is a visual representation of impatience that uses layout to work.  It's pretty great.

This overall layout structure is also interesting with how it plays with proximity. The recording studio setting, the destination, consumes more page space as the woman gets closer to it. Which is cool, because we feel her approaching the studio even though we never see her close the distance directly. It's kind of a subliminal effect, but I think it is really cool.

This layout is also interesting in the rigid way it segregates the woman and the man within it. The settings of outside and the recording studio control room are kept obviously, architecturally separate such that they feel like different realms entirely. What's more, when the woman eventually enters the recording studio, she is basically caged in the recording booth. At no point do we see the man and woman share a room together without a barrier between them. All of which really sets up the theme of gender segregation in this comic: men and women are divided in Bitch Planet down to the level of the layout. 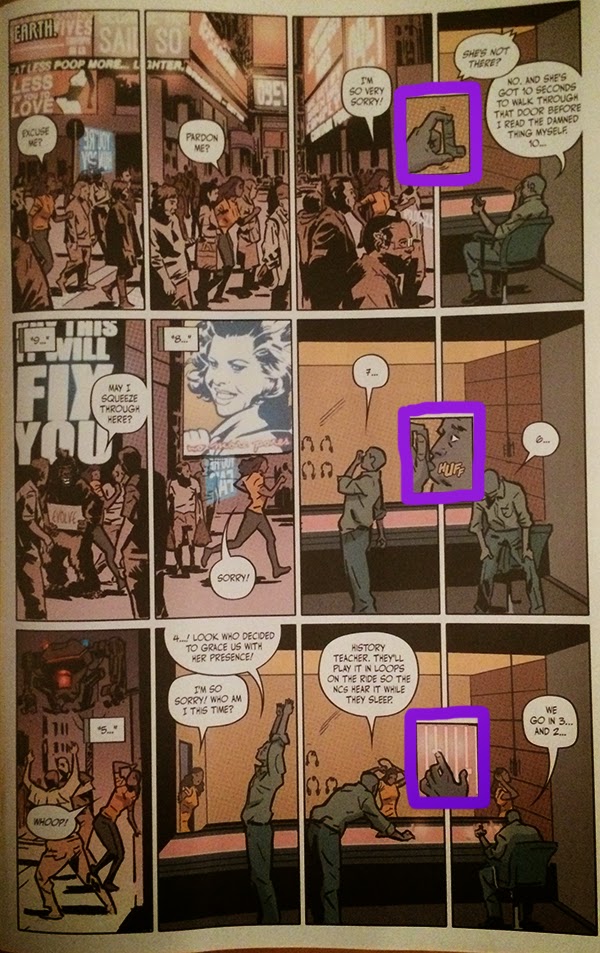 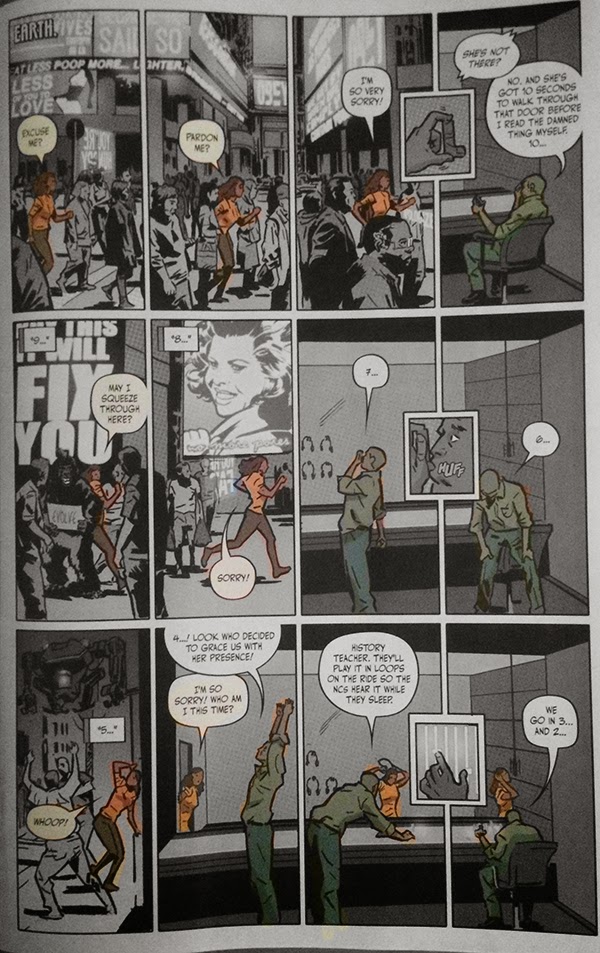 But there are additional elements added to the page on a structural art level that also lend important storytelling information, but more from a functional process perspective.

The first are the three additional panels that sit squeezed between the third and fourth panels in each row. These panes provide key information into the emotional state of the man in the studio control room in a way that breaks up the 12-panel grid and adds visual interest to the page. I think my favourite thing about these panels is how the first one is used. We go from the woman running late outside to the inhaler before we ever see the man in the studio: this sudden burst of nervousness is our introduction to the man. It's a great little storytelling choice.

I'd also like to point out how colour is used on this page to highlight the main characters in the composition. The woman, despite moving through crowds of people is always really apparent and easy to see. This is because the crowds are coloured with a muted, greyed-out palette while the woman has bright, undiluted colours. This way her dark skin and bright orange shirt pop out from the crowd and make her obvious to see. (This effect, of course, is aided by the attention grabbing nature of her dialogue bubbles.) Meanwhile, the man in the recording studio has almost the reverse effect, he is done in muted colours but standing in front of a brilliant background and has similar, but reversed contrast forces in play. Which again serves to make him pop out from his environment. It's really smart colouring that makes the entire composition work well, and further emphasizes the seperation between the man and the woman in the scene. 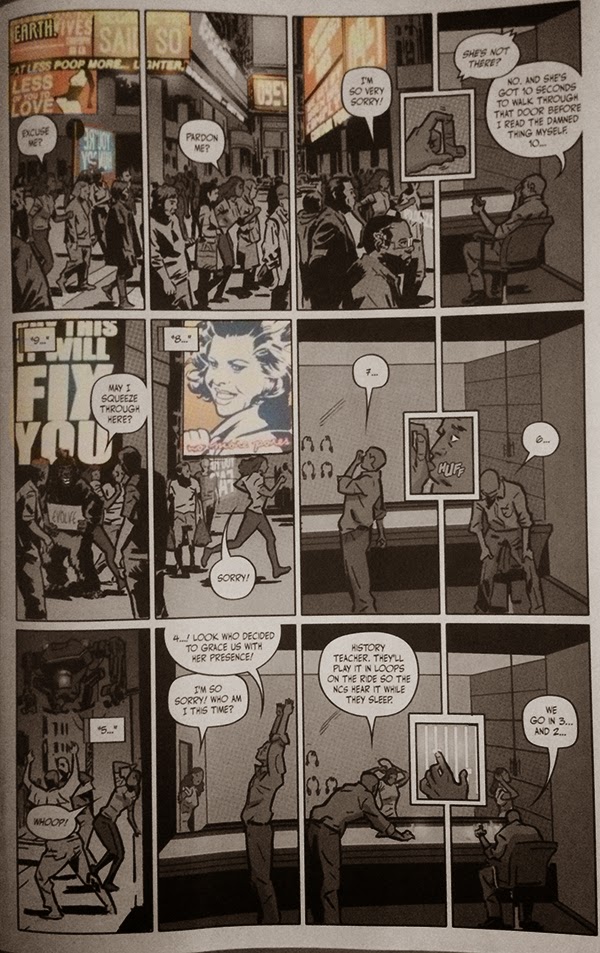 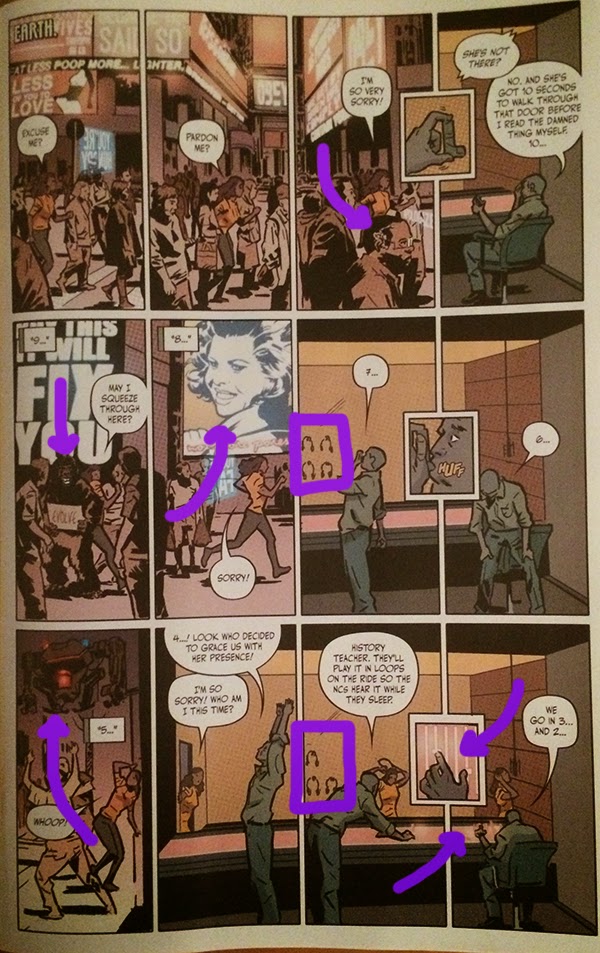 And then there are all the ways the themes of the comic are built into the page to help give the comic an immediate narrative identity.

The most obvious portion of the comic is the narrative itself. We see a woman rushing on her way to a recording studio while running late. She apologizes and excuses herself, being polite and graceful despite being late, remaining "Compliant". And she does all of this to be locked in a room and told "who" to be by a man in a literal control room. It isn't exactly as on the nose or bombastic as a space prison for rebellious women, but it does directly set the stage for the ongoing narrative of women being exploited by men and society.

This page also sets up the themes of Compliance and the enormous societal pressures for women to conform to certain standards. In the background of the page we see a number of advertising billboards which demand/suggest that women lose weight or that they can "fix" them or that they should just "obey". You can see the late woman running through an absolute gauntlet of propoganda and advertising meant to generate obedience, conformity, and shame. Which is sickeningly realistic, and also a great way to build these themes implicitly into the readers very first glimpses of the world of Bitch Planet.

Bitch Planet is also set in the future where there are penal colonies in space. This first page starts the process of inoculating the audience to the Science Fiction nature of the comic by subtly presenting future technology within the page. In the first row of panels we see a man in the foreground with some sort of head-mounted Sci-fi gewgaw on his noggin. In the first panel of the bottom row we see a flying robotic police drone (I presume based on the red and blue rollers) which is an obvious bit of futurism. And finally we see the sound studio man using some sort of adaptive, hologram display/interface instead of a traditional analogue soundboard to produce the woman's recording. It's the future just casually thrown in.

And finally there are just some small details built into the page that I think are just lovely inclusions. Like, standing in front of the mysoginistic "fix you" sign we have some sort of, I presume, animal rights protestor who literally gets in the way of the woman. Which is maybe a great dig at PETA (a notoriously sexist animal rights group) or maybe a comment on the fact people can universally rally behind animal welfare but not feminism. And then there is the billboard displaying a cameo shot of a glamour fashion pic of a young Kelly Sue DeConnick in the background, which is just totally fun. And finally there are the headphones hanging on the wall and how they go from four in the third row of panels to three in the fourth row as the woman dons a pair. It's the kind of wonderful attention to detail that I love to see in comics because they make everything feel genuine. There is a lot of love built into this page.

Integrated together, all of these elements unite to make a page that is interesting, tells the story in dynamic ways, and which starts to build the themes and setting for a comic all in a way that just feels effortless. This page clearly establishes the tone of Bitch Planet in 12.3 panels, which is a remarkable cold open. And I knew, by the time I finished reading this page, that I would read the entire series in issues, and then again in trades. Because this page is fantastic.

And so is the rest of Bitch Planet #1