Deep Sequencing: Lost In The Shadows

Or how a momentary lapse in storytelling can lead to a lot of confusion in Umbral: Out of the Shadows
By Antony Johnston, Christopher Mitten, and John Rauch; Image Comics 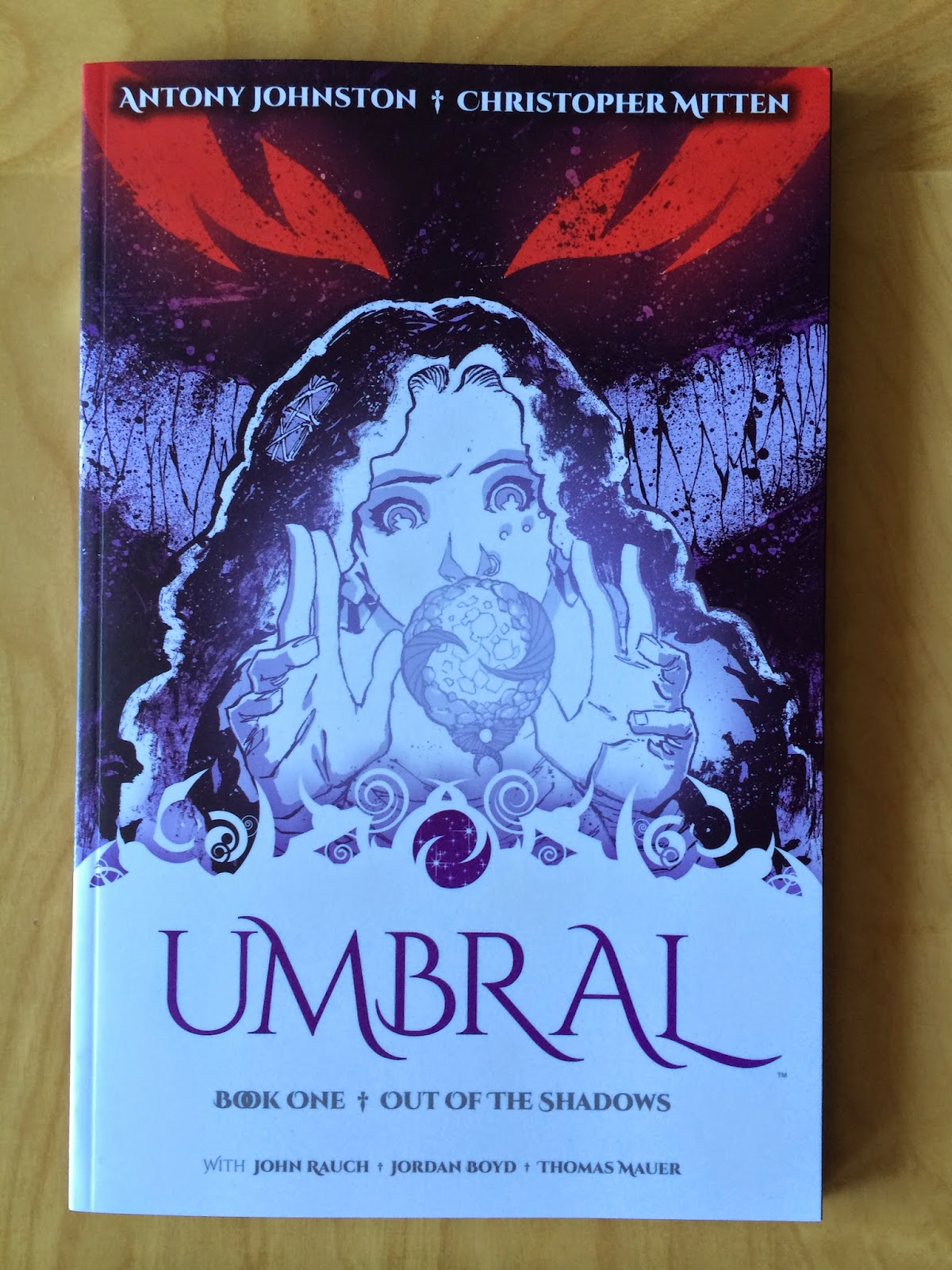 Umbral is a pretty great fantasy comic that totally scratches a particular genre itch I have. The comic is creepy, swashbuckling, and filled with one of the saltiest, cussiest protagonists in comics (which as the descendent of sailors, I appreciate deeply). The comic also has a great style and a wonderfully atmospheric approach to colours that makes it look unique and makes for an interesting read. I really enjoy it and think that it's a comic worth checking out, particularly if you are an epic fantasy fan looking for a comic to try.

Umbral: Out Of Shadows is also a comic with a good example of just how easy it is to lose storytelling clarity.

Now, I don't usually like to write about what I don't like about comics because I think its overdone on the internet and often it boils down to "I don't like this choice" or is just ragging on a comic that is obviously bad. However, I really like Umbral and think its a good comic and I think the mistake they made is interesting and instuctive and worth taking a closer look at.

There will be *SPOILERS* for Umbral Vol. 1 in this post. 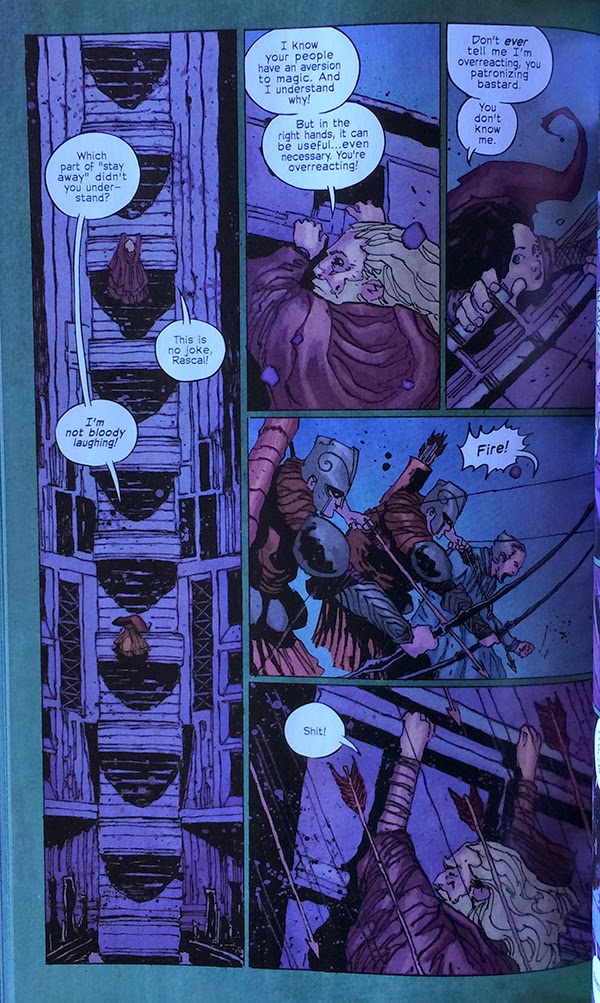 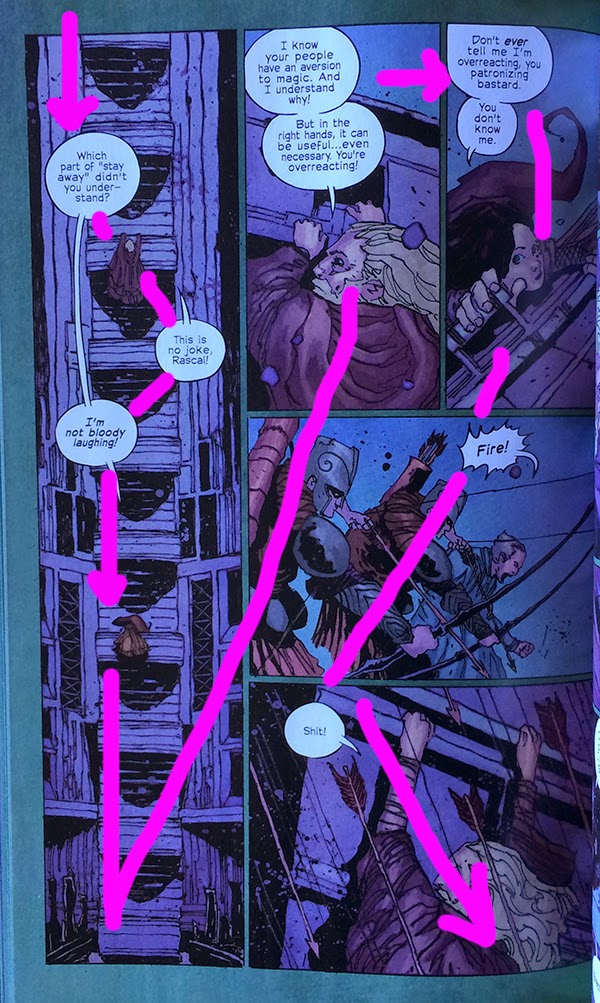 Before I throw Umbral under the bus, I'd like to point out just how good the majority of the comic is. Take a look at this page here and how clear and atmospheric it is. The long tall establishing panel on the left sets the story and sells the feeling of height, the top right panels show the characters dangling into the page in a way that really captures their precarious position, and the orientation of the archers in the bottom two panels really nails the storybeat of archers firing down on the dangling characters. Add in some really wonderful atmospheric purple-shaded colouring and lettering that really helps guide the reader through the page and this is great comics.

This is really representative of the level of quality in the majority of Umbral. 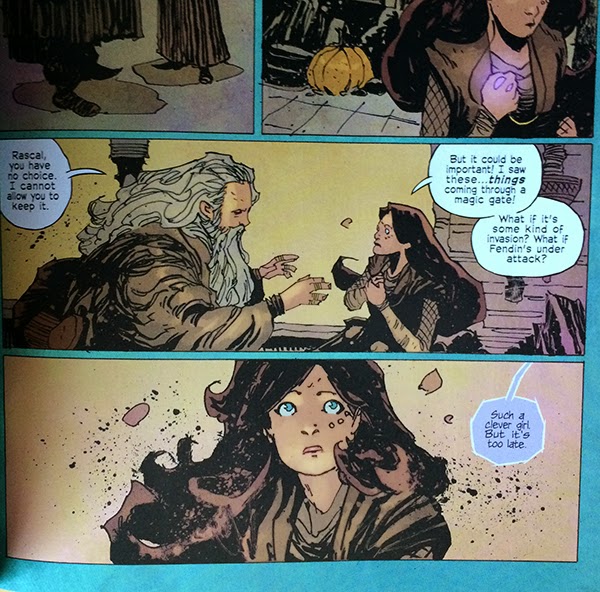 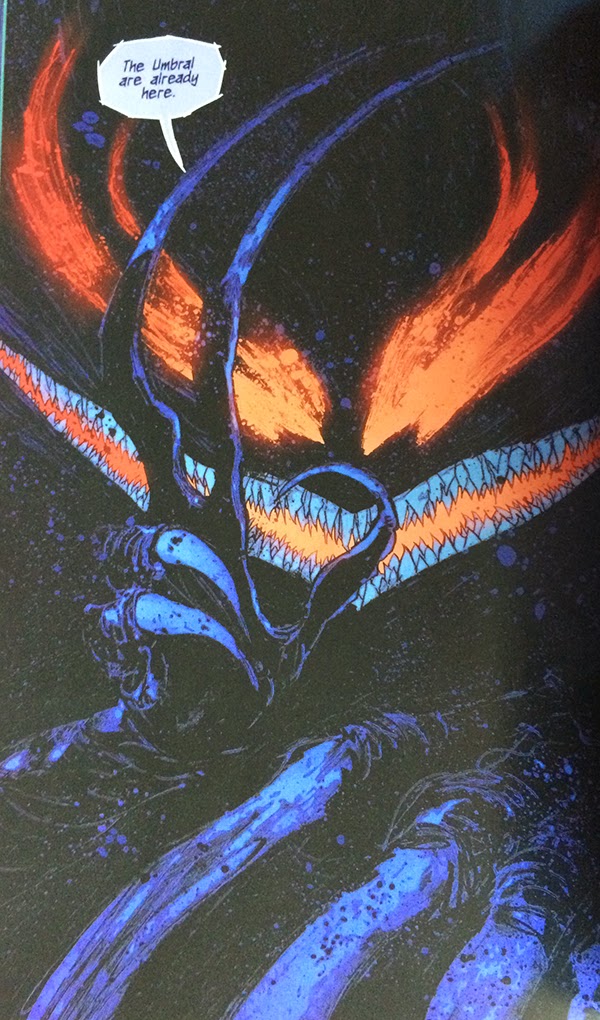 This is where storytelling really breaks down for me in a way that left me considerably confused and caused me to miss an important moment in the story.

As I read these pages originally this is how I interpreted them: Rascal (the girl with the magic stone) is confiding with the head of her Thieves Guild. She tells him about the madness at the palace, the appearance of monstrous shadows, and about the magic artifact she has stolen. Her guildmaster asks for it himself and then, from off stage right, a shadow monster enters the room to menace the pair. In my initial reading of these panels there are three characters at play: Rascal, the guildmaster, and the shadow.

The intended story of these panels is that Rascal confides in her guildmaster only to have him, the guildmaster, transform into the shadow monster. In the intended story, there are only two characters in play: Rascal and guildmaster/shadow. Which I did not get until several pages later...

And I think I had problems with these panels because of a number of storytelling choices made in this sequence. For instance we do not see any sign of the guildmaster transforming into the shadow on panel; we see the human guildmaster and then shadow, and nothing in between. There is also the fact that in the first panel in this sequence the guildmaster is to the left of Rascal, yet the speech bubble from the shadow initially comes from the right side of the page. This whirling perspective is confusing in this instance. And then there is the form of the lettering: shadows have special speech captions, and the guildmaster uses the human one, and there is no continuity in the contents of the captions to tie them together. Essentially, my issue here is there is no bridging information that tips the reader off that the guildmaster is really a shadow and this caused me to be confused.

Imagine if the sequence had the guildmaster in the first panel have a little bit of purple-shadow-colour at the edge of his hair and clothes and his speech was in a shadow-bubble. Then, in the second panel, if the speech bubble was on the left of the page. I feel like this would be much clearer for readers.

Which really emphasizes how fine a line creators have to walk to maintain clarity. The difference here for me was a matter of colouring and lettering, and those are relatively small things. Small things that made a big difference in how I understood this sequence.

But yeah, Umbral is a mostly a really good comic! You should read it!
Posted by Michael Bround at 08:00