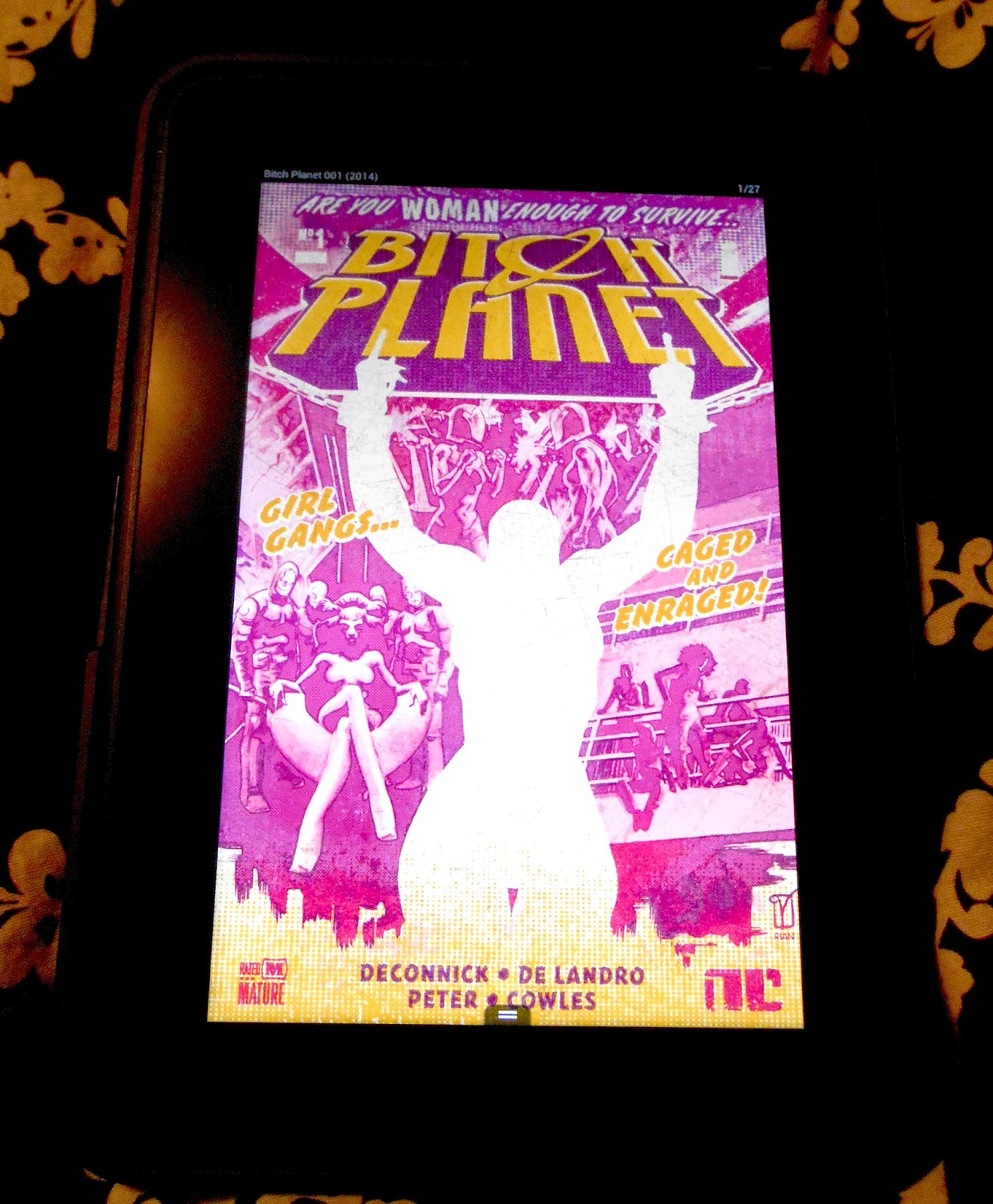 To be totally honest, I was sold on the concept of Bitch Planet the moment I heard it: A science fiction story that takes the traditionally exploitive trope of women in prison, written by an unapologetically feminist author, and featuring a clearly diverse cast of characters. I’ve been eagerly awaiting the first issue of this comic with both excitement and curiosity—as much as I adore Kelly Sue DeConnick’s writing, I really wanted to see how she could use such a theme and produce a positive narrative. My excitement, as it has for several new number ones recently, means I bought Bitch Planet digitally, even though a hard copy issue will also be waiting for me the next time I make the journey to my comic book store.

It turns out, my excitement has been completely validated—Bitch Planet is so great, you guys.

*SPOLIERS* within, so proceed at your own risk until you’ve consumed this story yourself. There is also nudity, violence, swearing, and discussion of damaging patriarchal values, so also proceed with caution if those things are not for you...

Bitch Planet issue one spends a lot of time world building, telling the story of Earth as it is in this not-so-terribly distant future, and how society operates. We open on Earth, where the background is rife with advertisements designed to encourage consumers to improve themselves. “Less of You to Love” flashes one advertisement, “It Will Fix You,” another, reinforcing the idea that we are not satisfactory as we are (a familiar theme to anyone looking at advertising in the current world).  The first traces of a feminist tale begin on page one, and boy-howdy, they do not stop appearing there.

It turns out the woman running through the street on page one is recording a voiceover that will play to prisoners, termed “non-complaints,” on their way to the Auxiliary Compliance Outpost—Our eponymous Bitch Planet. Even the language used to describe this journey places additional emphasis on a clearly patriarchal system—Mother Earth is now viewed as the Father, who casts out the unworthy, where they might find mercy at the hands of Mother Space. 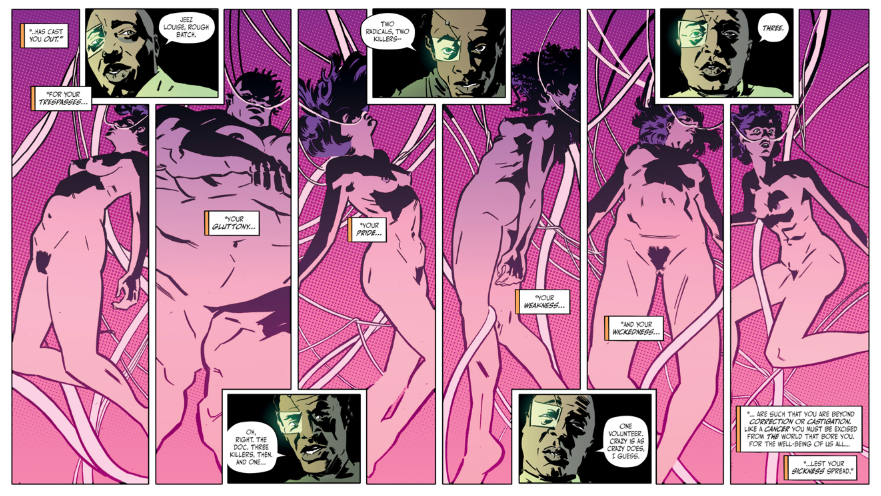 “Like a Cancer you must be excised from the world that bore you,” the announcer says. “For the well-belling of us all, let your sickness spread.”

Non-compliance, it’s clear, is dangerous, and to be feared. And that, my friends, is the first moment it becomes clear that Bitch Planet is not just set in an overtly, threateningly patriarchal universe, but is also a story for the feminist reader—this world, not built for us, is afraid of the damage that could be done by someone who dares to not comply.

I adore the art in this sequence and beyond – De Landro draws a cast of characters with diverse shapes, sizes, colors, and even body hair, and does so in a way that doesn’t sexualize the characters at all. The most sexualized character in the prison scenes is the holographic warden, whose mutable form consistently possesses crazy-exaggerated proportions and features.  Any questioning is discouraged, and within moments of arrival, an Non-Compliant (NC) is beaten by a guard. 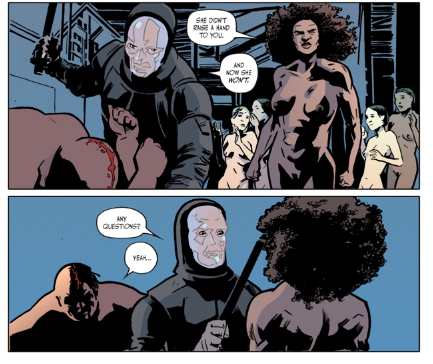 The guards at the prison wear masculine-looking black uniforms, complete with masks, visually setting them apart from the feminine population of the planet. They are utilitarian and conforming—not a single distinguishing factor is visible, with even hands covered by gloves. At this point, we don’t know who is behind these masks, but I find myself hoping DeConnick and De Landro will let us explore their identities as the series moves forward.

Back on earth, a man is trying to save his wife from the colony. He’s paid to have his wife sent, but it’s a mistake, and now he’s trying to buy her way back. As the story flashes back and forth between Earth and Bitch Planet, at first we think Marian Collins has been a victim here, and her husband, for whatever reason, is trying to make things right. Instead, when his wife is thrown back into his arms, it’s a younger woman, Dawn, a new, Compliant wife accidentally picked up on a warrant meant for the woman he’s literally discarded as no longer useful.

Marian Collins’ Non-Compliance, it seems, was not being young or attractive enough, and for daring to be upset her husband cheated on her. She even begins to blame herself for her husband’s affair as she speaks to the warden. It turns out Earth of the future is still a place were older women are discarded when they are no longer seen as desirable, young, beautiful—only on future-Earth, a woman could have her freedom taken away for this end of sexual desirability. At this point, Marian’s use has ended, and it’s her fault. No one is blaming her husband for his affair, not even Marian, and it is certainly not seen as wrong that he found a way to rid himself of her in order to move on to a younger woman.

When Marian’s clearly about to face some sort of punishment or harm at the hands of the guards, another prisoner Violet steps in, trying to protect her, giving us a first view of one the core women who will be the focus of Bitch Planet. Though, ultimately, she doesn’t save Marian, she’s the character doing the things we instinctively feel are right—Violet stands up for those around her,  questioning why no one else is stepping in. 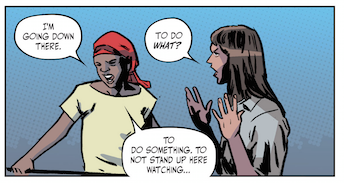 “This is not your business,” a guard tells her as she stands between them and Marian.

“Maybe it ought to be,” Violet replies.

Which is enough to inspire some of the women around her to care too. Or at least to act out and riot.

My favorite science fiction stories are the ones that allow us to have a conversation about something that is wrong with our own world. Science fiction can throw familiar themes into an unfamiliar setting and open up taboo subjects for observation, consideration, and discussion. Bitch Planet gives us a world where we can look at the systematic injustice faced by many women in our own society. Sure, we don’t live on a planet where non-compliance to social norms means we could literally be cast out and imprisoned, but man, some days, figuratively at the very least, that is the world I live in.

For instance, while the advertisements in the background of the first few pages on Earth are clearly meant to be hyperbole, a glance at my bathroom counter could tell you that I spend a great amount of time and money altering my appearance. I use expensive products and appliances to adjust my hair and my face every morning and dress in a way that is considered both appropriate and fashionable so I can comply with societal standards of appearance while doing my job. On the days when I spend less time on this than I feel I should, I feel guilty.

I can tell you this starts young, as well; my students routinely get up even earlier than I do to try and navigate the murky waters of what is cool—what is Compliant—in the world of teenagers today. They’re concerned about how they dress, what they say, and how other people see them. For young women, in particular, they see that if they don’t fit in and cater to the wishes of those around them (again, if they aren't Compliant), they’ll face negative consequences. I feel like it’s important to note that these negative consequences do include physical harm—I’m thinking of a young man this year who thought a reasonable response to women not wanting to have sex with him was to plan to shoot up a sorority and kill multiple people, or another young man who shot a girl at his school after she turned down his prom invitation.

Bitch Planet #1 makes explicit that background hum of misogyny and the related pressures and fears that women live with every day. This book feels like permission to be angry, and to cheer on someone who is fighting back. 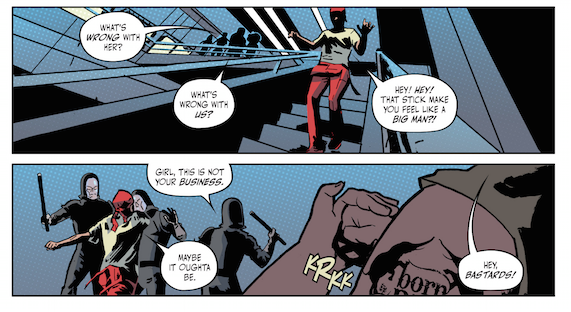 “Maybe it ought to be,” Violet says when a guard tells her their treatment of Marian isn’t her business. I find in her a character I want to see more of because she actively does what we all should. Feminism relies on the understanding that we have to work together to fight the systems that harm disenfranchised groups, even when that harm is not happening direct to us or the groups we belong to. Violet sees that something is wrong, and instead of accepting it as the way things are or ignoring it because she isn’t directly affected, she stands up and fights back.

The observer is right, she’s worthy of note, of attention, and I think, of celebration.

Bitch Planet #1 feels like a comic I’ve been waiting for. I’m eager for more of this world, and already salivate at the thought of issue #2 and beyond. I can’t wait to see more of this toxic power system, the cast inhabiting this story, and how they’ll rock the system that is trying to cast them out. I want to know how dangerous Non-Compliance can be.