Or the exploration of identity in Thor #2
by Jason Aaron, Russell Dauterman, and Matt Wilson; Marvel Comics 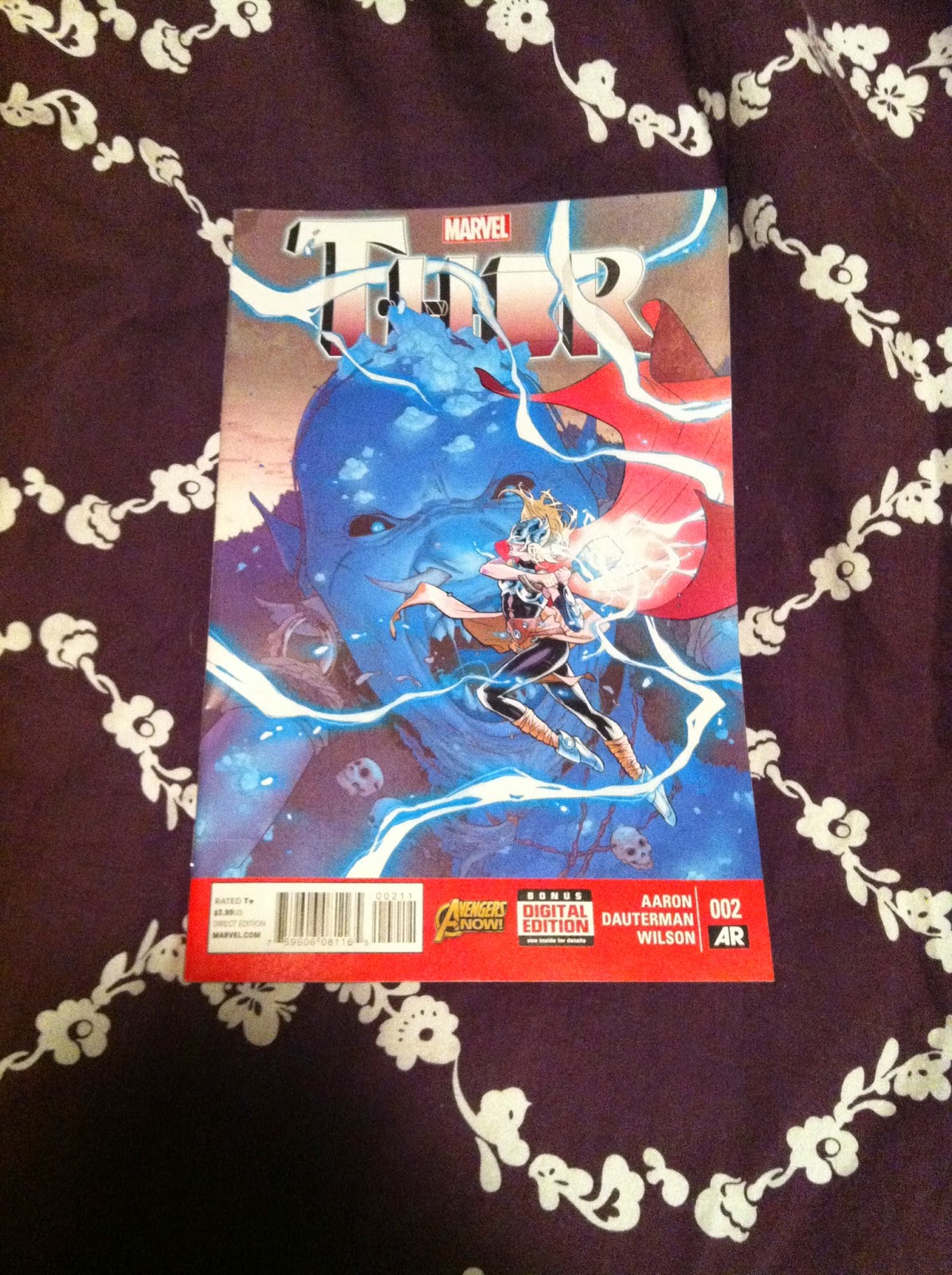 Whereas the first issue focused on how Thor Odinson’s loss of worthiness and Mjolnir’s choice of wielder affected the world around them, the second focuses on the internal monologue of our new Goddess of Thunder. We’re presented right away with a contrast—Thor’s outward speech is that of an Asgardian (even shown in the wonderful formal font we always see from our Asgardian characters in Marvel comics), but her internal monologue is decidedly more modern and casual.

Issue 1 faced down the question of worthiness; Issue 2 is the beginning of an exploration of identity.

*Spoilers* ahead, so turn back now if you want to read the issue before reading my take on it.

Since we still don't know the identity of the new Thor, obviously, the mystery of who our new Goddess of Thunder is will be forefront in this book for a while. A mystery that seems to exist on multiple levels in the comic: as the reader is figuring out who Thor might be, Thor is also trying to figure out her new identity. She recognizes, immediately, that something is different. 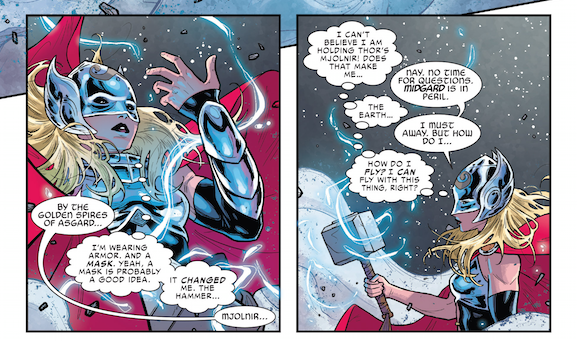 She’s speaking differently, trying to figure out how to fly, and discovering she has knowledge of events that it appears she previously did not. She herself has, or at least is, developing a new identity before the readers eyes.

I am fascinated by the process of identity development; one of the biggest reasons I love working with adolescents is that this process is still a major focus of their daily life. The field of psychology has a wide range of theories outlining this process, with varying views about how and when (if ever), our identity reaches a state of being fully formed.

James Marcia’s theory of identity development, though typically applied to adolescents, is an interesting model to use when thinking about a super hero’s identity.  Marcia’s theory centers around the idea that identity is largely the result of choices and commitments made by an individual. Identity development involves exploring multiple roles and perspectives, then making a commitment to elements that best fit with their identity. Individuals still exploring multiple perspectives and ways to interact with the world are considered to be in crisis until they have explained a range of choices and made commitments.

Our hero, who likely had finished adolescence and was carrying around a fully formed adult identity, is now facing down a serious identity crisis—having to integrate her prior identity (still a mystery to the reader) with a new role—being the Goddess of Thunder.  Before she can consider too many aspects of this identity crisis, she’s off, somehow knowing that the earth is in Peril.

Here’s what I like about our new Thor already: she’s jumping in to conflict Mjolnir first, working to keep Earth safe.  While it’s clear she didn’t know that picking up Mjolnir would change her into some sort of hero, she’s also clearly happy to use these new powers to enter the fight. At one point, she reflects that she’s not even sure what powers she’s gotten, and why Mjolnir chose her as worthy, but she keeps fighting, focusing on confronting one small challenge at a time.

So, Who is Thor? Or, I guess, more appropriately…who was Thor? And what from her prior identity is going to carry forward? We already see that she’s willing to wade into battle to protect Midgard—is this a trait she’s carrying forward, or something inherent to the identity of Thor? I’m fascinated by the idea of integrating these two identities, one of which is still a mystery to the reader. 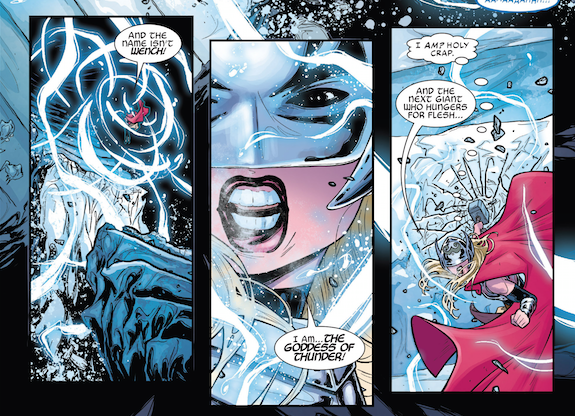 Issue two continues the mystery of Thor’s identity without sacrificing the forward motion of the plot. This identity exploration feels natural as it slides in along side the fights with Frost Giants, Trolls, Dark Elves, and Oil company executives. Small hints about who Thor was before she picked up the hammer pop up throughout the story, but the focus remains on who she is now, and on what she has to do to continue to protect Midgard. While we don’t yet know what in her past made her worthy, we see what sort of worthy action she is taking now.

“With that hammer in my hand, I was the goddess of Thunder,” she thinks to herself in the final panels, facing down Frost Giants without Mjolnir’s support. “So I guess now the question is: who am I without it?”

I want to know too.
Post be Jenn DePrey

Previously:
Thinking about Thor #1: On worthiness
Posted by Michael Bround at 08:00