Or an infogram of time in Phonogram: Singles Club
By Kieron Gillen, Jamie McKelvie, and Matt Wilson; Image Comics 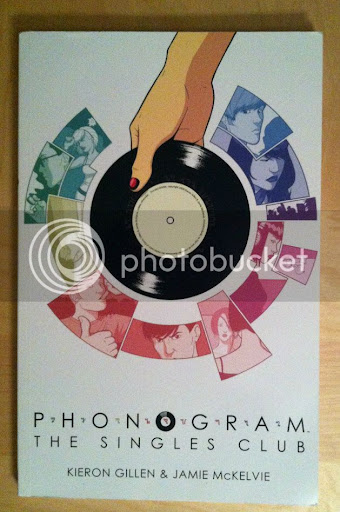 Phonogram: The Singles Club is kind of a masterpiece of comics craft. Part of this is that The Singles Club is exceptionally well written, with its dynamite premise, an engaging troupe of characters, and perfectly tuned dialogue. It's also a comic with beautiful artwork: fantastic acting, dynamic use of space, and aggressively thoughtful colouring. But the thing that makes Phonogram: The Singles Club the kind of comic that everyone should be taking a very close look at is the way Team Phonogram embeds the story so completely in setting. Structurally, The Singles club tells seven interlocking stories with common settings that occur simultaneously on the same night, and, this complicated, multifaceted beast fits together PERFECTLY. This narratives thread like a tapestry, the chapters obey the timeline of the story like a Teutonic train schedule, and the physical spaces are complete enough to pass building codes. Phonogram: The Singles Club is just about the most granular, engineered short comics run I've ever read.

Because Phonogram: The Singles Club is so well crafted, you can literally create page-by-page maps of plot, time, and setting of really remarkable detail. And, because I love making infographics, I've done just that.

Timeline: This is, as accurately as I can figure it out, the timeline of Phonogram complete with the music that is explicitly stated. Bear in the mind that there is NO SCALE to the y-axis, because that would be really hard to do. Also keep in mind that some of these placements are best guess and that I am a terrible fraud. Also, for plot details please refer to last week's plot maps to tie this to goings on.

(Apologies in advance for any mistakes or omissions.)

This diagram is a plot map so there will be *SPOILERS* in the diagram. Be wary.

One of the cool things I got out of doing the timeline is how the DJ intensive fourth chapter functions as the time key to the series. Between the songs and the fact the DJs arrive before and leave after the party this Chapter functions as The Single Club's metronome. Which beyond being structurally cool comics is kind of a formally interesting nod to what real life DJs are doing: controlling song choices controls the shape, rhythm, and timing of the party.

(Incidentally, as someone who just had to hammer together a wedding reception playlist, DJing is now a thing I have so much more respect for... but still not enough money to hire out.)