Or a look at the busy town compositions of Multiple Warheads 2: Ghost Town
by Brandon Graham 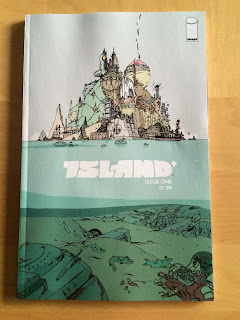 Another great thing about the new Island comics anthology is that it appears that it's the vehicle for more of Brandon Graham's great comic Multiple Warheads. Which, I've gotta say, I'm pretty excited about. Brandon Graham is one of those comics artists with a distinct aesthetic and an approach to comics storytelling that I think runs contrary to a lot of mainstream wisdom. While I don't think you can drill this difference down to any single aspect of his work, there are a couple great examples of wide angle shots in the current instalment of Multiple Warheads that really showcase one of my favourite aspects of Brandon Graham's storytelling. Which are perhaps worth a bit of unpacking.

There will be *SPOILERS* for the Multiple Warheads in Island #1. 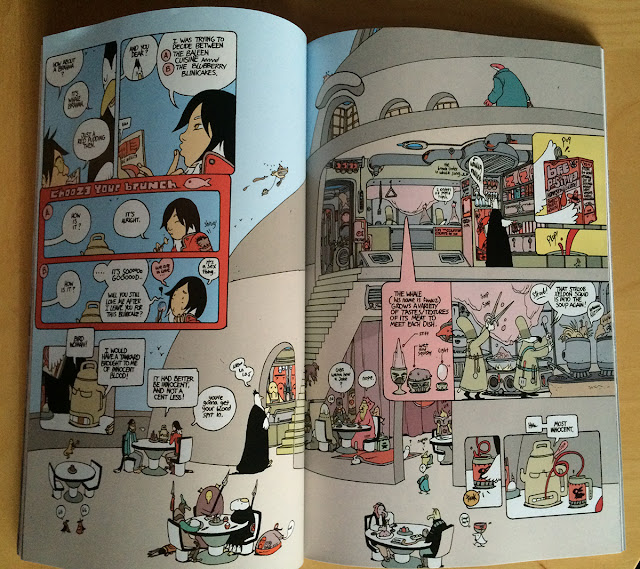 In a lot of cases good storytelling comes down to efficiently conveying the emotion or details of an event in a clear and concise way. Usually this entails the artist honing their composition in on the main characters, or key actions, or providing an evocative look at setting to provide spatial context. It's also often an action in limiting extra details to only what is necessary to sell the shot, to populate the scene with just enough detail to make the world look inhabited, but not so much to distract readers from the key things being portrayed. Or, TLDR, it's all about focus.

Multiple Warheads essentially ignores this approach and throws a chaos of detail at the reader to sort through. And it is kind of great.

Take this double page spread which shows our protagonists going for a crazy brunch. The page is drawn wide angle to provide spatial awareness of the restaurant and to allow the world of Multiple Warheads to exist. 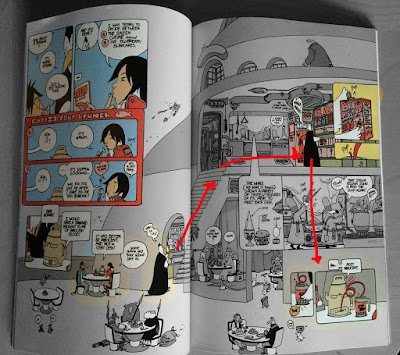 The main story of the page has our protagonists order their meals (complete with a fun choose-your-own-advenutre moment), their weird Warhead thing order his meal, and their bird waiter person go and fill out the order. Despite the very busy layout, this central story is very easy to follow across the spread, taking advantage of lettering to draw attention and the effective tangent of the staircase to handle the transition from one clearly defined story region to another. Despite all of the seemingly extraneous detail on the page, the underlying core narrative is well constructed and clear. 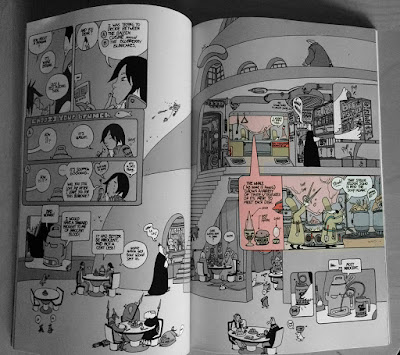 Built into this main narrative is a smaller mini-strip within the spread focussed on world building. The restaurant our heroes are eating at is built on a whale and uses specially grown whale meat as the main ingredient. This smaller comic strip shows the cooks in the restaurant and explains a little bit about how the whale-restaurant functions. It's a fun little discursion that makes the whale-restaurant feel more real. It also, critically, slots into the main narrative very cleanly, fitting into the flow in an organic spot, and adding a nice sense of elapsed time before progressing to the final panel in the main story. 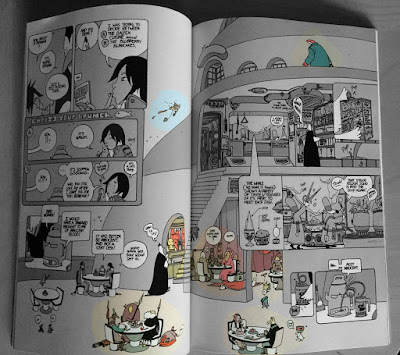 Finally this page has little islands of crazy characters around the periphery. These characters largely function like extras, filling the restaurant with people and making the world feel more lived in. Except, unlike the standard idea of extras, who are meant to occupy a space without attracting undue attention, and are usually kind of bland, these extras are all crazy Multiple Warheads characters who are each unique weirdos. Which really helps build the veracity of the world: not only do the heroes of Multiple Warheads have fantastic, crazy stories, but so does everyone in this wild, post-apocalyptic world. It's a really charming choice.

In a lot of ways this double page spread violates the common wisdom of storytelling: it packs in tons of extra detail, includes fun, but irrelevant side stories, and generally makes the world instead of the core narrative the focus of the page. And yet this spread still manages to provide a clear, well built navigational path through the composition so information can be logically and effortlessly read. The result is this living world, seemingly bursting with life that navigates this really effective compromise between clutter and narrative focus. It's great comics and something Brandon Graham does really, really well.