Or a look at the chilling, virtuosic layouts in Moon Knight #2
by Warren Ellis, Declan Shavley, and Jordie Bellaire 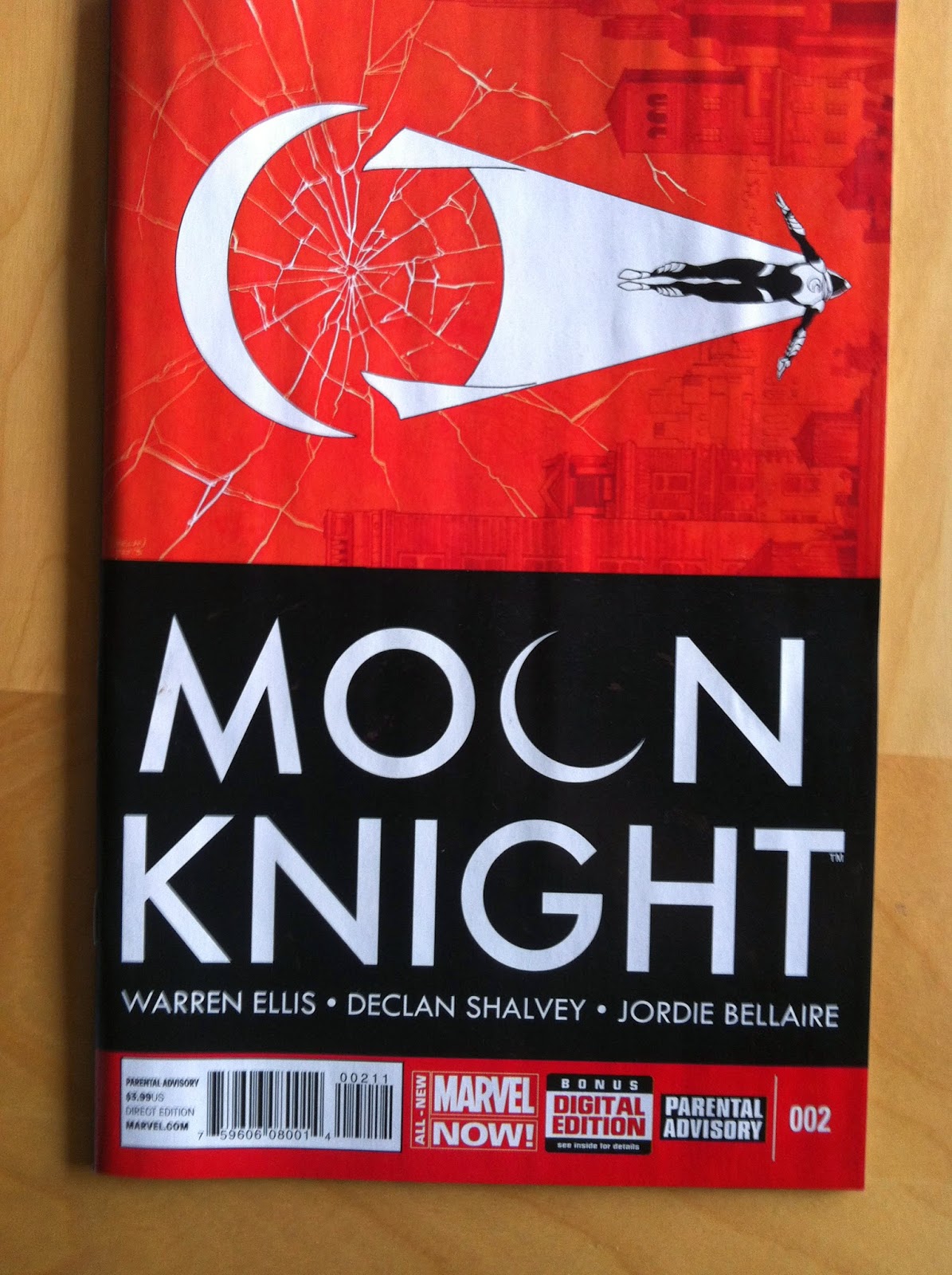 Moon Knight is turning out to be a downright chilling comic. Beyond the questionable mental status of the titular hero, the series is really going to some dark places. The first two issues of the comic have dealt with serial killers, a slasher out to steal other people's body parts and a sniper out for vengeance. The villains of both issues have also been marginalized in some way, veterans broken down and abandoned like old tools. Moon Knight is dark and engaging and challenging.

It's also a wonderfully made comic, a great collaboration of writer and artist and colourist with a really cool, smart aesthetic and some really innovative use of colour. Moon Knight #2 also has my so far favourite sequence of the series: a truly smart and disturbed sequence of comics that is completely worth taking a closer look at.

There will be *SPOILERS* here. So go read the comic first. 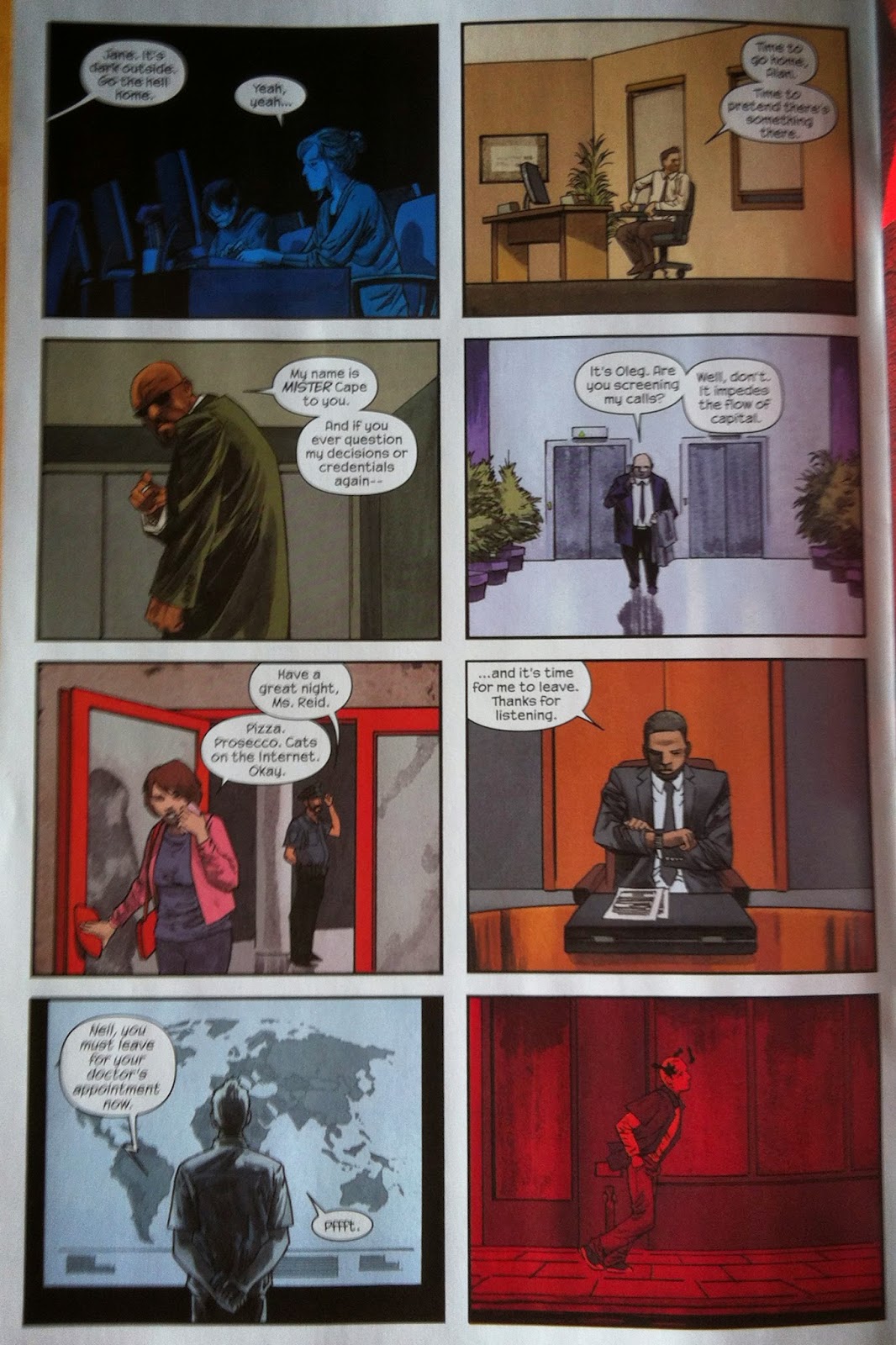 The crux of this really great sequence is a deceptively simple format, repetition, and a certain crushing ruthlessness. Each page in the sequence shares this simple eight panel grid format, with each panel telling the story of a different workaholic, lonely financial worker. And on every single page of this sequence one of these workers is murdered. 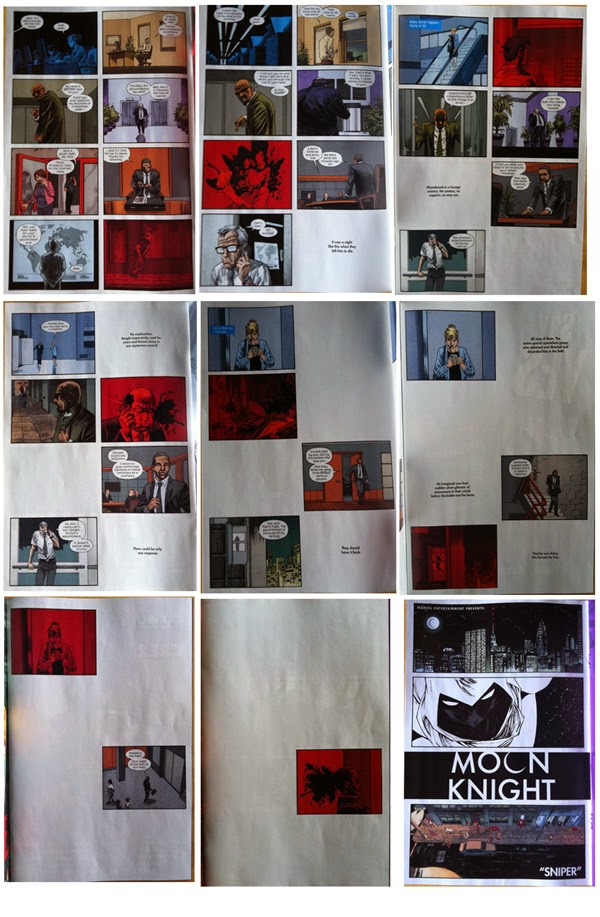 Every time one of the characters is murdered, in a flash of red their story ends. The space that story occupied is then simply left empty in the grid. What was once a page filled with stories is chewed down systematically, until all that's left is emptiness. White. Dead.

As a visual metaphor for murder it's brilliant. The world starts complicated and rich, full of stories about the guy hiding his terminal cancer from his family, or the workaholic woman with the strained relationship. However, due to the action of the murderer, one by one, each of these stories are snuffed out. Ended. Leaving only an empty gaping hole of unfulfilled potential in the world. And as more people are murdered these spaces grow until the whole page is diminished and barren. It is chilling and crushing and hard.

This sequence is also an astute visual representation of a sniper. Each of the murdered people are unsuspecting, observed by us and the killer as they walk blithely into the path of a bullet. At the same time we don't see the sniper, who kills somewhere out of view, anonymous except for the bodies and the spaces in the world he leaves. His voice, when we hear it, is written in the empty spaces where a living character once occupied, further emphasizing this calculated, anonymous murder. We hear the sniper in the effects of his grim work. It's fucking brutal comics and a fantastic creative choice.

If this level of comics craft continues to be applied to the darkest corners of the human psyche, then Moon Knight is a must read comic.