Or turning on and off the flow taps in Daredevil #30
By Mark Waid, Chris Samnee, Javier Rodriguez, and Joe Caramagna; Marvel Comics

Daredevil #30 is this great, kind of a Silver-agey story about Daredevil teaming up with The Silver Surfer to fight a menace. It's a bit goofy, but filled with a lot of unexpected, fun moments and a kernel of despair that sets up what looks like an important plot thread. It's another great comic in a series known for being great comics.

It's also a comic that has some great examples of different approaches to panel progression that I think maybe bear a closer look.

This post will contain *SPOILERS* for Daredevil #30. So read the comic first.

So, I'm pretty interested (obsessed?) with comic pages that exhibit especially fluid or directed storytelling. I'm interested in this because one of the problems sequential storytelling has to contend with is how to make a reader look at things in, well, the right sequence. If character A is reacting to event or character or speech B than the audience ought to see B before A for the best effect. And so the kinds of pages that lead the reader through the artwork in a way that correct queues events can add extra value and impact to the storytelling. Even in quiet talking scenes. And I think this page is a great example of a kind of holistic, natural approach to guiding the reader through events in the perfect order. It's all kinds of subtle, but damn if it isn't effective. 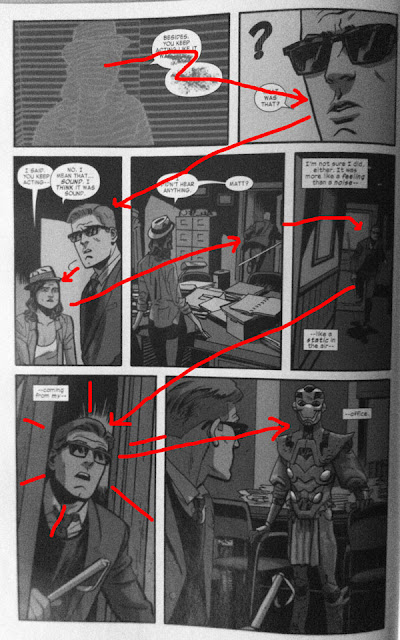 This page works its magic mostly by just framing events, and maybe subtly adjusting, the normal reading path of comics to create the perfect sequence for each storybeat. The view-path starts in the top left (the natural starting point) with the Daredevil-sense-silhouette of Kirsten McDuffie (love-interest/new lawyer partner) and then travels through the two conveniently placed word balloons to the edge of the first panel. You scan right, pick up the perfectly placed word balloon, and track across to Matt Murdock's confused face. You carriage return across the page and crash right into Matt's confused fez before carrying on the same view path to see Kirsten's reaction to his behaviour. You (or at least I) then dealt with this panel's word balloons before moving to the next panel taking in Kirsten standing and the first speech bubble before carrying on to Matt running out of the office and the second word balloon. Which is great because it basically splits this panel into two separate moments adding a sense of time and, as an added bonus, imparts the motion of Matt moving into the hallway. This neat movement effect is continued into the next panel where our eyes sweep around the corner, the actual motion of Murdoch, before crossing the page to the next row which is a continuation of Matts trajectory in this panel.  (Also, notice the split narration caption box adds to this sweeping motion.) The carriage return transition here also has the added bonus of being like a semi-page turn, making the shocked Matt in the bottom left panel suddenly appear adding a great extra weight to the panel. We then carry on across the page in the level of Matt's gaze straight (catching Matt in the next panel to add a nice sense of place) to the unexpected alien visitor. It's just a great page that uses really great layout, figure placement, and brilliant lettering to ensure everyone is seen and everything is read in just the right order while also adding extra drama to key events. It's great comics.

(I also love the use of green, which contrasts sharply with the red of Matt's glasses and hair to punch up the emotions of surprise in the top right and bottom left panels. Colour theory!)

This layout here is also pretty cool. Not because it flows effectively from panel to panel... but because it deliberately doesn't. I mean, if you look closely at each panel there is a clear sequence of events portrayed: Daredevil drives the Silver surfboard up, turns it around, swoops down and around and carries on. But this series of events broken up in a way that adds a lot of chaos to the scene, a haphazardness that really sells that Daredevil is just screwing around and plays on the gag of a blind fellow driving (and maybe also a little bit on New York cabbies who used to take the long way for a higher fare...). It's a really interesting choice. 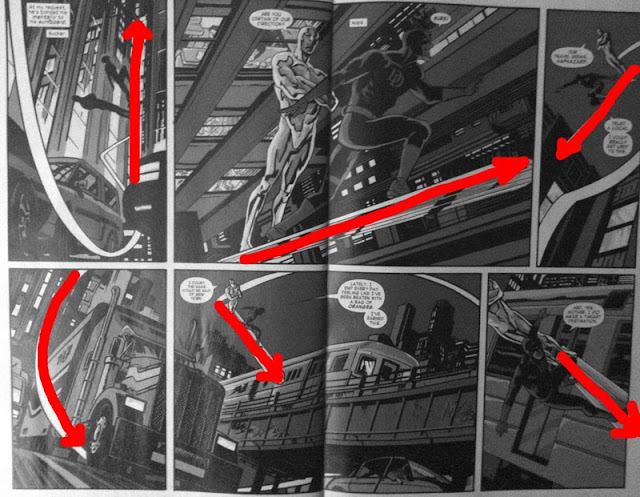 How this double page spread works, at least for me, is that the surf board becomes the key guiding shape: the board being a straight guide, and the long swooping contrail acting to impart a directionality to the guide. Basically, I feel like the Silver Surfboard acts as a vector that directs the reader. However it directs the reader not to the next logical location in a smooth series, but instead points in random, even opposing, directions to create the haphazard feelings of the scene.

So starting in the top left panel we have a vector that points not to the next panel, but instead sharply up and off the page as if Daredevil and Surfer are flying off the grid. We then move to the left panel which has a board vector almost perpendicular to the previous one and then move to the third panel where the vector opposes the one in the previous panel. There is no smooth transition from each of these positions and makes it feel fast (too fast to tie together) and random. We then carriage return from the top right panel to the bottom left along the vector of the board in the top right panel, swooping rapidly down along the path of the characters flight (which is pretty great). We then jog right, across a panel split designed only to further dilate time and add a sense of velocity, and see an unexpected downward pointed Silver Surfboard before moving to the final panel with yet another unconnected vector. Basically, to my eyes at least, the layout is a series of directional snapshots that don't entirely sync up but in a way that better sells the dramatic nature of the sequence. It's cool stuff.

So there you have it, two very different pages with opposite approaches to panel flow, one very guided and one deliberately disjointed, that both add a lot of drama to their individual scenes.