Or my apparently regular feature gushing about Matt Fraction, David Aja and Matt Hollingsworth's Hawkeye because this book is perfect. 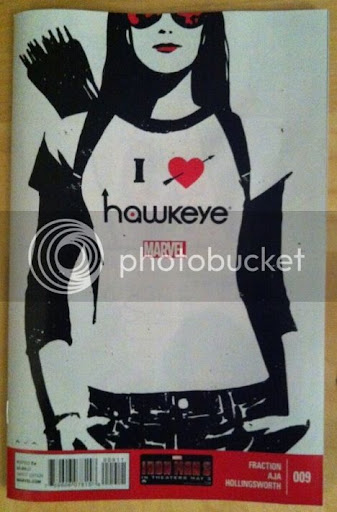 Hawkeye #9 continues the trend of exceptionally good comics. As usual the writing by Matt Fraction is this effortless and frequently hilarious delight (Mostly! see warning...), the linework by David Aja is gorgeous and thoughtful, and the colours by Matt Hollingsworth are stylistic and, as I am beginning to appreciate more, just as cerebral and integral to the visual identity of the book as any other aspect of it. And a new issue means a new wonky blog post on some aspect of the smart creative decisions made by the some part of the creative team.

(Also: Warning Hawkeye #9 contains FEELS. Do not read it will operating heavy machinery, in a public space, or while emotionally distraught. Side effects include gasps, sobs, and mild profanity. Feels!)

As per usual I'm writing this in a way that gives all of the credit to one member of a hyper-collaborative collective of creators and so I might miscredit someone accidentally. If so, the most apologies. (Also, apologies to Matt Hollingsworth for greyscaling his great colours to make my diagrams. A big long colourist intensive essay is brewing, I swear.) I'm trying to avoid the big reveals and moments in this issue, but you should go into this knowing that there will still be slight *SPOILERS*.

David Aja is, I think, one of the most cerebral artists working in mainstream comics. As good looking as his artwork is, I think what makes his work really remarkable is the ways he uses composition to provide additional layers of storytelling. One of the tools in his quiver is the way he frequently takes into account the vision path of readers and frequently designs his compositions in ways that guide the eye of the reader through the page. Hawkeye #9 has some great examples of this.

Comics are a visual medium, and as such rely on vision and human eyeballs to work. This is not just a self-evident statement because human vision is built around a series of predictable behaviours. Whether learned or just intrinsic to how our brains have evolved to use visual information, our eyes are automatically drawn to certain things. Like, you know when you see a sudden motion right in the corner of your peripheral vision (especially when you're wearing headphones) and your eyes instantly jerk over to focus on the source of that motion? That's the kind of thing I'm talking about, but, you know, in a static medium. David Aja is a master at hacking these visual behaviours to create pathways for our eyes to move through the artwork. Particularly in the absence of dialogue.

This sequence from the "Natasha: The Work Wife" section of the comic is a great example of this kind of guiding-the-eye composition: 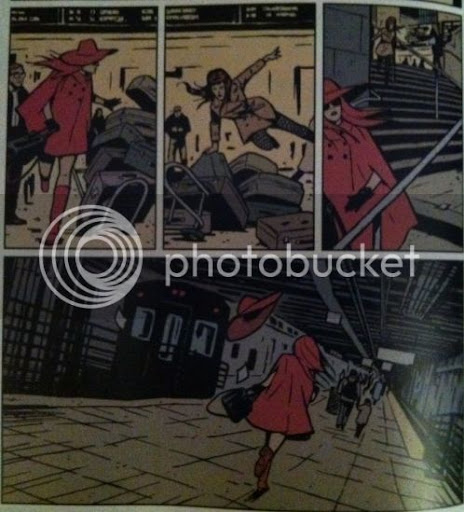 In the first panel, we see Penny running and looking to the right. Our vision follows the direction she is looking (we want to see what she sees). This brings us directly to Natasha vaulting the suitcases in the second panel where her outstretched arm points and directs us to the top of the third panel. In this panel our eyes get drawn along the lines of the banister, follow the curve of the stairwell (how cool is that!?) and arrow straight in on Penny running down the subway platform. 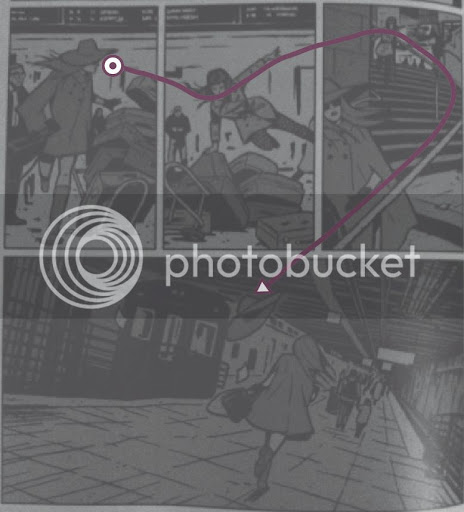 What this collectively does is increase the speed at which we can experience the page. Instead of tracking around ourselves trying to find key details, our vision is guided to the most critical parts of the page. And this in turn adds a sense of urgency in this page that thematically matches its chase scene contents.

Here's another great bit of visual guidance from the "Bobbi: The ex-wife" chunk of the story. Bro. : 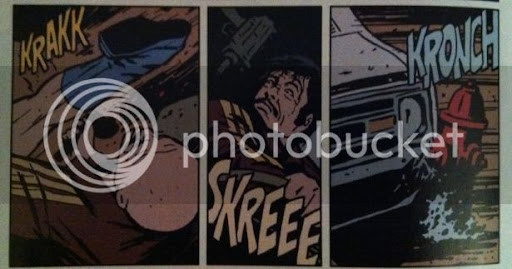 In the first panel our eyes are instantly drawn to the blue boot, and follow along the trajectory of apparent motion and into the top of the second panel. Here, our eyes track down the arc formed by the Uzi submachine gun, the Bro's arm, and the steering wheel/lettering into the third panel where the arc is continued by the front bumper and ends in the fire hydrant and final sound effect. 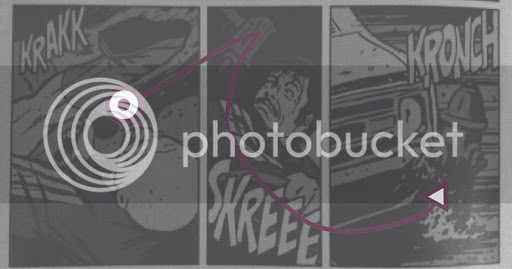 Again, this page guidance speeds up the events in this page and makes them see to occur all in a moment, despite being spread over three panels. Even more impressively, the long arc in panels two and three manages to simulate the motion of the Bro steering hard to the right making the van veer hard to the right too. This makes the pathway of vision match the motion of events so that reader actually experiences the movement. Not only that, but the fact that the arc, and therefore the visual movement, ends in the van crashing adds extra emotional weight to the collision.

The way the lettering, by Chris Eliopoulus presumably, enhances this visual tracking is also super impressive. Come to think of it, the use of bright blue for the boot  and red for the fire hydrant makes these key visual elements extra eye catching too, which is an example of Matt Hollingworth's colours enhancing the effect of visual tracking as well. Collaboration!

This little bit here from the "Kate: Kate" section of the comic has another cool bit of visual tracking magic: 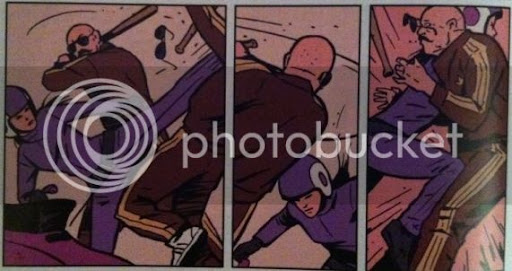 This collection of panels has TWO distinct visual guide paths by my estimation. In the first panel our eyes are drawn along Kate's outstretched leg in to the second panel where we jog right, fail to see her where we expect to, which pulls our vision down to a ducking Kate (this is enhanced by the path made by the Bro's shoulders), which then sets us up for the upward explosion of Kate's knee into the Bro's Bros and ends in the collision (for extra impact). This is the visual path describing Kate's motion. There is a second path made by the half formed arch of the Bro's swinging bat (our eyes automatically try to follow motion paths). This is the bros visual pathway.

Individually, both paths create urgent, quick paths to navigate the panels. These paths, like the other examples, create a sense of speed and urgency to the page and also adds a level of continuity and reader experience to the motions described by them. The fact that there are two competing visual pathways adds a swirling, chaotic feel to the events that increases the visual tension to the brawl depicted. And, this might be a stretch, but the fact that in the panel where the Bro gets sacked he lacks his own visual path might be designed to show that his initiative in this fight is over. 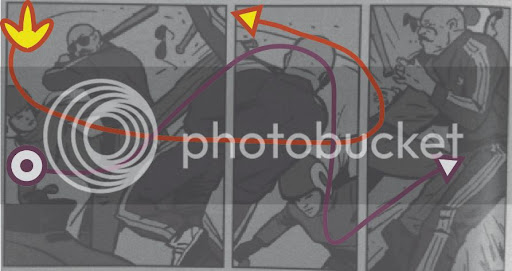 Of course, great story telling is also present where the panels do not have a direct visual continuity path. And this can be used to highlight action. Take this panel that comes immediately after the third panel described above, but on the corner of the page in the row of panels below it:

The fact that this panel does not connect with the other panels makes it surprising and distinct which adds extra weight to the headbutt. Also, the fact that we are quickly swinging our vision across the page in a carriage-return actually simulates the motion of a headbutt: it's very quick, and is a blind motion that ends with this image of impact. Which is pretty cool.

But one with FEELS! So many FEELS!