Worshipping The Wicked + The Divine #17

Or a look at the importance of a blank page in WicDiv #17
by Kieron Gillen, Brandon Graham, Jamie McKelvie, and Matt Wilson; Image Comics 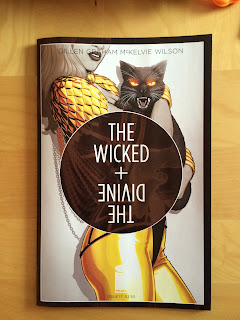 A thing about comics that I sometimes think doesn't get enough wonky attention is how important page order is to story experience. Individual pages function in printed comics are like discrete storytelling units, and controlling the rate and way readers encounter these units can dramatically alter the way the story is experienced. On a very basic level, the order of pages matters to how a comic is read much like how the order of panels matters. The most obvious example of this is the page turn, where readers suddenly get access to a new page that was previously hidden, making a kind of quick cut and the potential for a surprising reveal or comedic moment. But it goes beyond that, and I think WicDiv #17 does something interesting and really smart using a blank page to optimize the page reading order in the issue.

(This is also, a thing that I think is important to talk about because, incidentally corporate comics *SUCK* at this by jamming ads for like, beholder bobbleheads and Gumby the collectable card game into their magazines screwing with the delicate order.)

There will be *SPOILERS* for WicDiv #17 below. Like, serious spoilers! 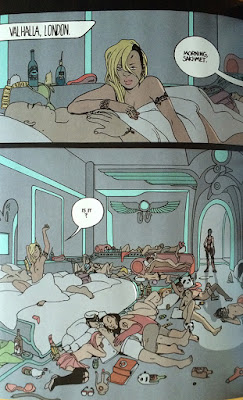 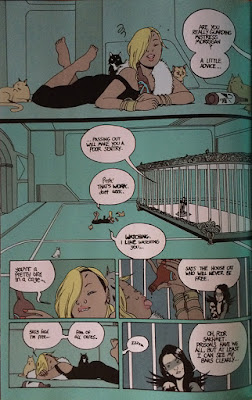 Now before I try and convince everyone that what is basically a blank page is super interesting and ignoring the rest of the comic, I just want to point out that WicDiv #17 is pretty great ad features Brandon Graham's great artwork and style in the fantastic world of Gillen/McKelvie/Wilson's WicDiv world and that results of this collaboration are frequently pretty great. Like, there are few people who can draw an orgy that is somehow sexy and goofy looking and still somehow not exploitive or could make a scene where a dangerously unstable cat goddess wallowing outside the cage of a bird goddess look so lackadaisically charming. There are some really fun, unique moments in this comic. 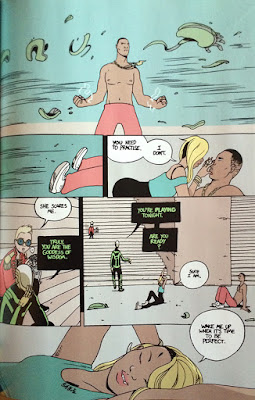 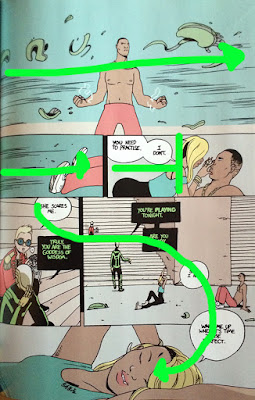 (For the record, a 4.9 earthquake happened right now and... woah! It's been a while since a big one's hit in these here parts, and the first one I've lived on a double digit apartment floor for. Quite a lot of swing and torque, it turns out...)

There is also some really astute storytelling on display throughout the issue. I especially love this page and how it uses reader tracking to make the pacing of the page fit the action perfectly. The tangents in the first panel that cruise through the background lend that panel a sense of speed (which works beautifully against the static Baal). Or the second tier of panels which has a hard left-to-right directionality that captures the motion of the sequence wonderfully. The second panel also takes advantage of the transition from the first panel to the second row, and slams the reading motion in opposition to it making for an extra impactful panel (that additionally shows the a consequence of the motion that already happened). The next panel has also has a pretty great abrupt stop built into the panel. The bottom three panels have a looping meandering path through artwork and dialogue captures the lazy, calm after the intense top panels. Collectively this page, I think, captures the polarity of Sakhmet, her danger and fury, but also her playful laziness in how the page is read, and therefore experienced. 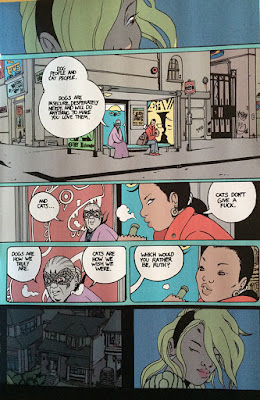 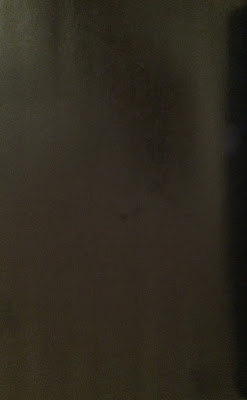 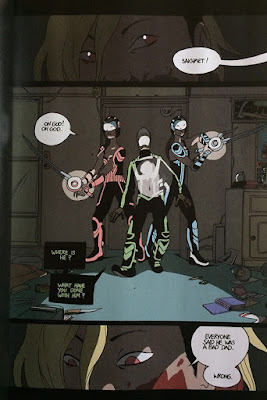 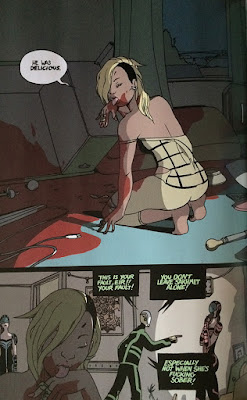 So knowing that WicDiv #17 is a pretty great comic for a lot of reasons, let's talk about how great the solid black page in the comic is. The story of this sequence is that Sakhmet has descended on her childhood home and murdered and eaten her father. This sequence works as well as it does because it reveals this information in a series of growing surprise reveals. The first page sets up the sequence, and looks downright benign, with Sakhmet reminiscing and smiling pleasantly (such a perfect panel btw) and then we get the all black page. It's ominous and empty, a long hard cut that it implies the passage of time and a significant story shift. The next page, which benefits from being after the page turn, shows cavalry arriving in an ominious situation. It's obvious something horrible has happened and that Sakhmet has been involved in some sort of altercation, probably violent and probably involving her dad. But it isn't until after the next page turn that we learn Sakhmet has *eaten* her father and the downright casual way she is reacting to that. It's a scene of slowly building horror that really benefits from having two adjacent page turns to ramp up and then up again the fuckedness quotient of the situation. And that black page shifts the other pages around just enough to make this construct work. Which is such a little thing, but such a smart, smart choice.