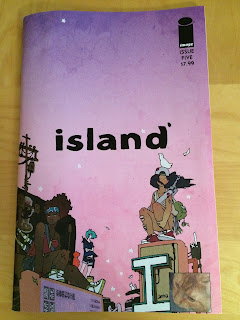 I have an admission to make: I'm finding it kind of hard to get excited about comics right now. Between a crushing work schedule and a charismatic but needy baby time is at a premium, so I'm finding that a lot of perfectly fine comics that feature nice art and serviceable writing are just kind of dull. Like, dropping titles dull. So bear that in mind when I say Island #6 is one of the very comics I've read lately that I really enjoyed: all three feature stories in this edition were extremely accomplished episodes of comics featuring tremendous artwork, world building, and storytelling. The current chapter of Ancestor, by Matt Sheean and Malachi Ward, was maybe the most engrossing, captivating comic I've read in months.

It is also a comic that does something fun and wonky with margin space that I think is worth taking a look at.

There will be substantial *SPOILERS* ahead. 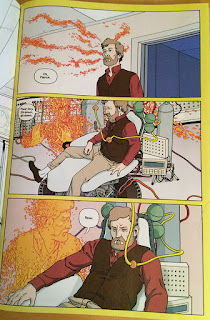 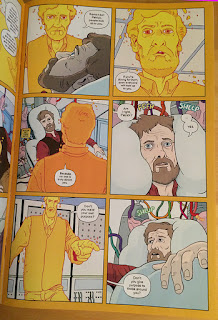 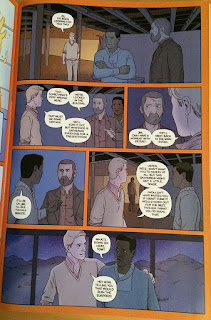 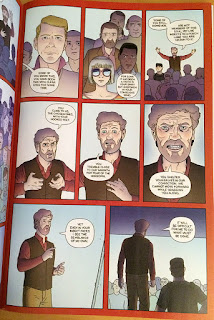 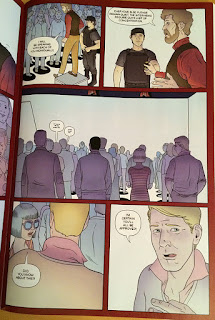 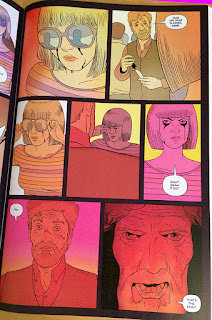 The story of Ancestor, in a very basic nutshell, is that in a near-future where everyone has a kind of advanced, holographic computer with them everywhere they go (a kind of extrapolated smartphone type idea), a group of friends attend a party run by a visionary inventor except things aren't what they seem and something is afoot. In the current issue it's essentially revealed that the visionary inventor isn't entirely stable, which builds over the course of the comic to outright madness in a truly masterful story of unfolding tension and story pacing. Shit gets fucked right up in a really, really skillful way.

A small part of this effect, that I think is really clever, is the use of panel gutter space. Rather than having white or black gutters that simply demarcate the division between panels, this instalment of Ancestor has coloured gutters that participate in the mood of the story. In the early pages, which focus on the inventor's instability the gutters are yellow, an unusual attention getting choice that conveys warning and alarm. As the story progresses and it becomes clear that the situation is much worse, much more disturbing and violent than the reader expected the panel gutters gradually change colour from yellow, to orange, to an angry, violent red, to a truly ominous black. It's the entire emotional arc of the comic rendered and encoded in colour. It subtly grades the feeling of every page and works like an ominous soundtrack in a visual medium. It's a small, but really smart thing.

I may not have a lot of time for comics right now, but Ancestor 4/5 and Island #5 I cannot recommend enough.