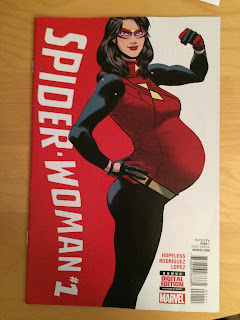 A whole new Spider-Woman is starting! With a new #1 issue! With the same creative team! The same on-going narrative and aesthetic look! Which is really... dumb.

(Seriously, Marvel needs to tone it down a bit with the #1 parade. It's getting comically asinine and increasingly difficult to keep blog posts straight.)

Fortunately, the creative team behind the current Spider-Woman are pretty great and the on-going story continues to hit the madcap fun of the last story arch. The new wrinkle, that Jessica Drew is very pregnant, is something I generally find a bit dubious, but thought was handled with charm and a sense of humour. (The montage of her on maternity leave and maximum pregnant was pretty great and very true of my wife's recent gravid experiences.) I'm still a little worried about how this story is going to play out, but I'm willing to give the creative team a chance to win me over. They pretty much earned it.

(Also, I totally have a theory about what's happening...)

Anyway, there is a page in Spider-Woman #1 that I think is pretty interesting.

There will be *SPOILERS* for Spider-Woman #1 below. 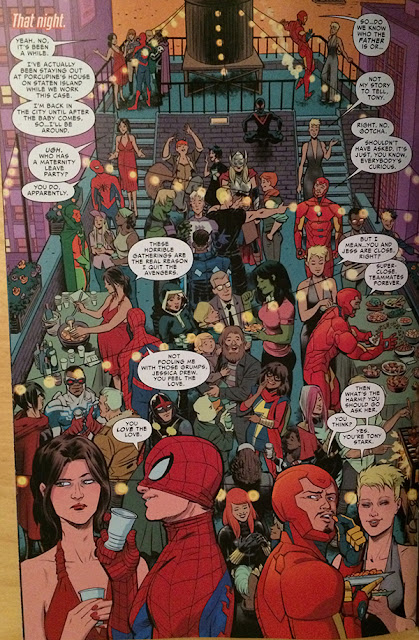 There are a lot of competing factors at play whenever a page gets made. Events and dialogue need to be placed in the page in a way that conveys narrative. Ideally this is done in a way that is clear to the reader and is visually interesting and aesthetically pleasing. It also has to be produced in an economical way: creative teams live under a constant threat of looming deadlines. Crowd scenes, which involve many characters, lots of detail and narrative clutter, present a slew of storytelling challenges that make them hard to pull, and yet, are pretty fun when done well.

What I love about this page is how efficient it is. The page establishes that a big fun party is happening on a rooftop (with a bunch of fun cameos). The crowd scene here serves to build the feeling of a well populated party in a way that lingers so that subsequent pages can focus on smaller groups of characters while still feeling like part of a gathering. This page is also pretty great as it manages to pack in two separate strands of story advancing, fun dialogue in a way that doesn't compromise the scale of the crowd scene, or burn an entire page on an establishing shot. I also love how it captures the sense of being at a party: moving through a crowd while mingling with individuals and the fact that parties are comprised of smaller, simultaneous conversations and interactions. It's a really clever concept for a page. 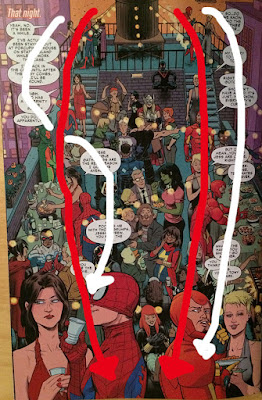 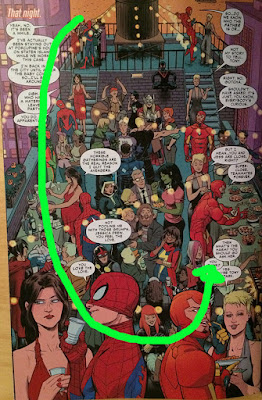 This page is also constructed in a pretty interesting way on a structural basis. Each narrative stream pops out of the surrounding crowd using smartly place dialogue boxes and the colours of the pinciple characters. The white dialogue boxes and the red of Jessica Drew's dress, Spidey's costume, and Iron Man's armour creates clear visual guides against the back drop of the mostly more muted other partygoers. That said, I did find this page a little confusing to read on the first pass, since my natural instinct was to turn the corner from the Spider-persons conversation right into the Iron Man and Captain Marvel's conversation, which isn't the intended reading path. I mean, it was pretty obvious this was a mistake, and a simple thing to reorient, but a perfect page would not have this moment of ambiguity. This is part of why I found this page so interesting: it is overall really good and contains some strong technical storytelling, but in its ambition, it also introduces what I would consider a minor problem. Which I think makes this page an intriguing example of a compromise between the different storytelling forces acting on the page.

Comics are so cool guys. So cool.