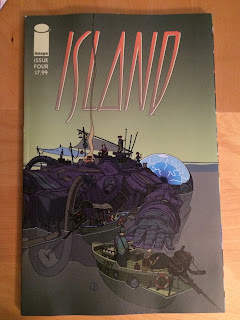 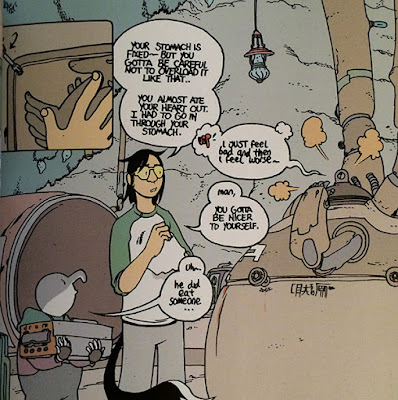 I think the common wisdom behind dialogue boxes and lettering is to be as unobtrusive as possible. The dialogue boxes should avoid covering artwork and while they should do their job of conveying what the depicted characters say to each other, they shouldn't be overly each catching and distract from the artwork. I feel like this metric maybe lacks some nuance: lettering is often a powerful storytelling tool that uses its ability to draw reader's eyes as a subtle guide to how to read a page. Where this perspective and the common wisdom intersect though, is that the dialogue boxes are best when they are seamless, semi-invisible page components that work their magic without being the focus of the page.

What this instalment of Multiple Warheads does is make the dialogue boxes an active, obvious part of the page in a variety of ways that are pretty cool. 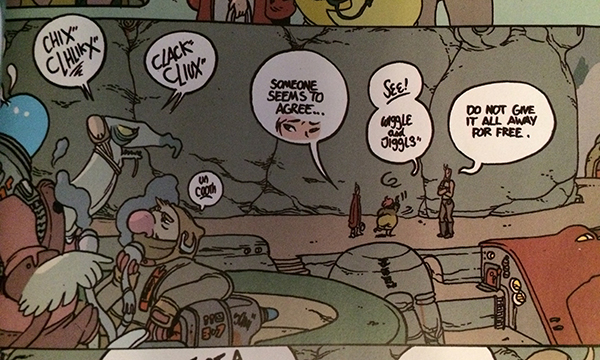 One of the realities of vocal dialogue is that it kind of has two parts: the words being spoken and the emotional tenor of the speaker. In Real Life, these two elements interact to create context and meaning. Someone saying "the dog is coming!" in a delighted voice (like I would) is saying something very different from someone screeching "the dog is coming!" in fear. Comics, which are a silent medium are great at conveying the word content of character dialogue but struggle a bit in layering in the emotional reaction.

Normally comics manage to encode emotion through character acting: the tenor of the dialogue is implied by the happy or sad or horny faces of the portrayed characters. But this isn't always perfect and sometimes, like when a comic is way zoomed out like above, the facial clues needed for this aren't available. Which is where smart comics happens: Multiple Warheads bakes the emotion of some dialogue boxes right into them with artwork that captures the feelings of the speaker. The above selection is, I think, pretty great because the uncomfortable glance in the dialogue box changes a kind of emotionally ambiguous moment of dialogue into something definite. It's really astute stuff. 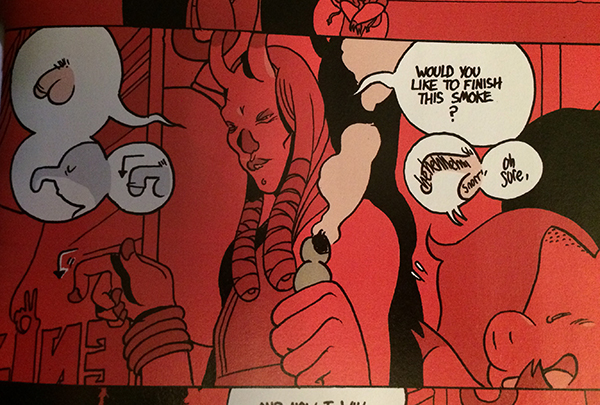 Another fun example of using illustrations inside of dialogue is this selection. Instead of having the two stoned buds here discuss how Moontoone's nose looks kind of like a dick using words, the comic shows this using pictures. It's a great choice because it takes way less space/time to parse than the equivalent dialogue: the reader can at-a-glance suss out the phallic pictionary of the situation. It's also petty great because, I think, it changes the feeling of the sequence. Reading someone explain in words how someone's face looks like a penis would be actually pretty cruel, but seeing it here in pictures makes the entire situation feel a lot looser and sillier. Less a cutting criticism and more two dopes being goofy. (I mean, it's still kind of mean, but for me it's the difference between jerks and people being ignorant, y'know?) The choice to use images here instead of dialogue here, I think, just makes this sequence work in a way using text wouldn't. 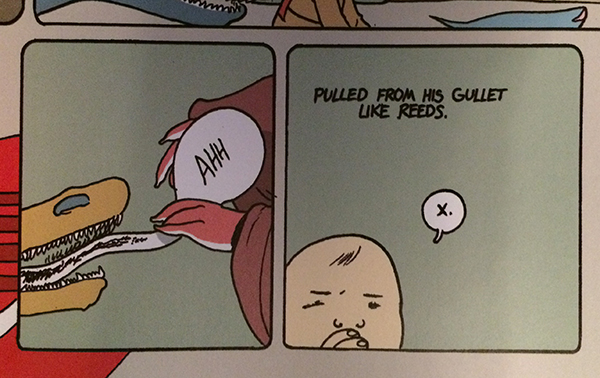 Another cool bit of dialogue box trickery in Multiple Warheads is the above sequence. In the comic a dragon is smuggling back a magical weapon-thing in his belly that a wizard extracts from him through his speech bubble. While it might not be a generally applicable bit of comics, I love it when magic is depicted in comics as something impossible or fourth wall breaking. Magic for me has always been impossible, amazing things that violate the rules of the universe, and seeing that played with as a visual metaphor is always cool. 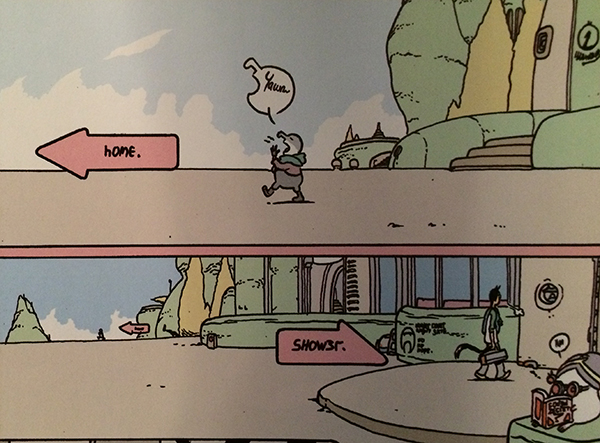 I think my favourite example of fun dialogue box experimentation is this selection here. It might not be the smartest or more most experimental dialogue experiment in the comic, but it is just so charming and fun. The way the call box and the wonderful hand lettering combine to make a yawning face, is neat, and the way that enhances the weight of that yawn on the page is pretty smart stuff. I am also pretty keen on this choice because yawning is just such a visceral experience, more about the motion and the physical sensation of yawning mouths and scrunched faces than the actual noise of it. I think the choice to build the face into the sound here lets the dialogue box convey more of that physicality than just the text alone would. Which is effective storytelling.

(I mean, it's late here, and I am yawning up a storm trying to write this section, which is further evidence that this bit of comics is great.)

Multiple Warheads, still making the case that there is all kinds of ways to make good comics.