I will be adding Doctor Strange and dropping Howard The Duck. 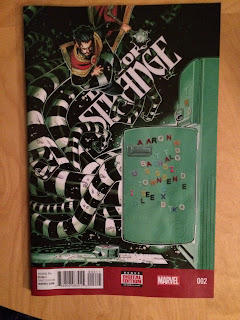 Why Doctor Strange: I have never read a great Doctor Strange comic, since I am apparently a Marvel Tourist, I am excited to climb aboard the Strange train and see if the current iteration will be my definitive take. I've read a couple issues and so far I am encouraged: the creative team clearly has a take for the character and there is evidence of a larger story preparing to spring on the comic. I also love the visual style of the comic: its chaotic, exaggerated style full of impossible clutter is fun to look at and seems like a great metaphor for the bizarre magical world of Doctor Strange. It's only been a couple issues, but it's been the most enjoyable of the new Marvel comics I've tried so I'm on board for the time being. 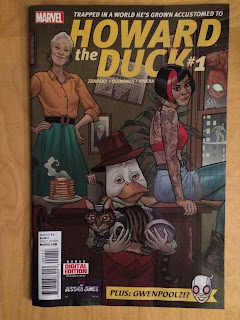 Why not Howard The Duck: Howard the Duck is a fun comic. It's goofy hijinks of a Space Duck and his shapeshifting lady friend in the Marvel world. I read a bunch of issues and had some fun. But... it seems like that fun is all there is to it? The comic hasn't really made that transition from a fun premise to a fulfilling story. Which is making it hard for me to sustain interest in the series. And if I feel like I need to make an effort to be interested in a comic, it's probably a sign that I shouldn't be reading it. So I guess my overall assessment of Howard the Duck was that is a fun comic to try, but probably not a comic you'll read longterm.