Or a look at a nifty take on a classic comics move in Spider-Woman #9,
by Dennis Hopeless, Javier Rodriguez, Alvaro Lopez, Travis Lanham; Marvel Comics 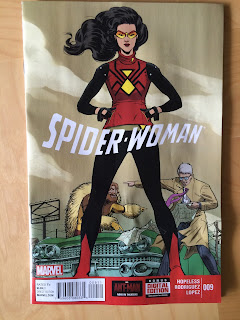 Comics are storytelling machines constructed to tell stories using pictures and words. Like any machine, comics have components, discrete pieces that make the machine work. Choices that work within the comic to tell the story, but which can also be held up and examined individually. There are a pretty wide selection artwork tools and tricks that are used, but two of the most frequent and classic tools of comics storytelling are the page turn and the splash page.

The splash page, of course, is when a comic stitches two pages together into a single, huge image. The idea being that the scale of this single panel will make the depicted material jump out of the book and seem extra exciting or impactful or cool. It's a simple idea that works really well.

The page turn, also of course, is when a comic uses the quick cut between the turned page to spring a surprise on the following pages. It's effective because it's, well, surprising.

These are classic, obvious storytelling devices, that are as old as comics.

There will be *SPOILERS* for Spider-Woman #9 below. 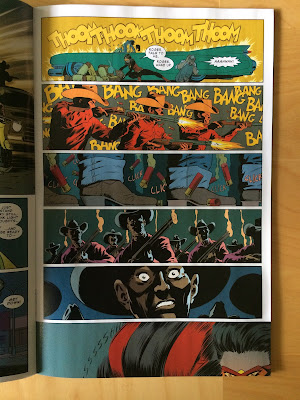 This is a fantastic setup page. It's moody, beautifully coloured, and sets the stage for the coming action in a visually interesting way. It's the last panel though that makes the page especially interesting: the narrow panel is filled with a blurry, rushed motion that only begins on this panel and leads right into the page turn. It's an interesting choice that will pay dividends once the page is flipped... 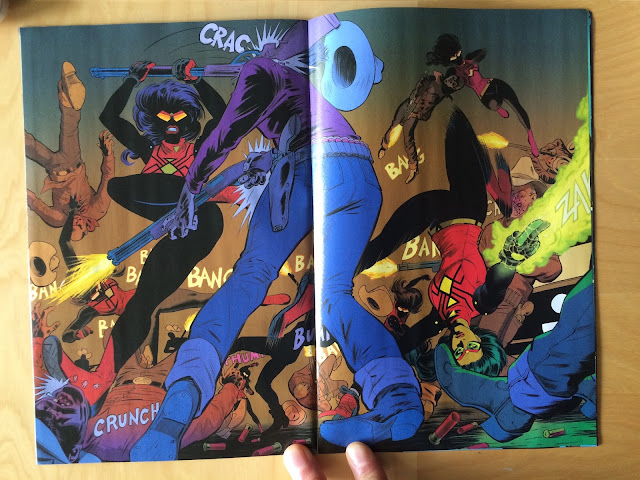 ...and we enter this amazing splash page that sees Spider-Woman smashing through a crowd of goons in an absolutely rock and roll page. What I love about this page, is that it breaks down Spider-Woman's actions into a disjointed chaos of motion that translates into a flurry of badassery. I'm also really impressed at the compromise the page strikes between visual complexity and emphasis so that the page clearly has a lot of discrete moments of action, but can still be read nearly at once, only really focusing on the rifle chop and energy blasts in the foreground. It's a big, exciting couple of pages, that when delivered surprisingly after a page turn are absolutely magical.

Which, I think, goes to show that Team Spider-Woman are good at comics and that when used properly, the oldest comics tricks can be really great.

Previously:Spider-Woman #8: turning down the background
Spider-Woman #7: the brilliance of the inset panelSpider-Woman #6: Guided chaos and multiple reading pathsSpider-Woman #5: Character Design and composition
Posted by Michael Bround at 08:00