I will be adding Black Canary and dropping Hawkeye. 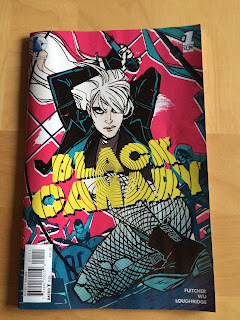 Why Black Canary: DC comics seems to be committed to telling fun, idiosyncratic comics that I actually want to read. Black Canary is pretty much a poster child for this movement: fusing talented, fresh creators with a fun new direction and the freedom to tell a new story. Specifically, this iteration of Black Canary sees the sonic-voiced, martial artist as the lead singer of a rock band on the run from thugs from Canary's past and nefarious forces who would abduct their enigmatic lead guitarist. It's the kind of concept that is absolutely perfect in theory. In practice, the comic is still a little uneven in the plot and clearly still finding its legs. Fortunately Annie Wu and Lee Loughridge are on art since they are super talented favourites whose partnership is seemingly perfect for the hijinks and character interaction featured in the comic. Between the promise of the concept and strength of the art, Black Canary is worth giving a chance. 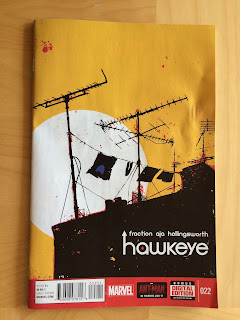 Why not Hawkeye: Because Hawkeye is over. Hawkeye is a comic, that for me, epitomizes what can be done with episodic, mainstream comics. It was wildly original, technically brilliant, and thoroughly entertaining. It was built of complete episodes that locked together to tell a tense, emotionally riveting, and extremely fun story built around it's own culture of in jokes, catch phrases, and long reaching pay offs. Hawkeye is a comic that was just about perfect from its effortless feeling first issue to it's clinic of a final issue; pound for pound the best comic that either Marvel or DC published during the time I've been writing this blog. So much so that Hawkeye changed the way I read and write about comics and what Atoll Comics has become. It's also, I think, a comic that made room for the movement towards idiosyncratic, styllish comics like, well, Black Canary. I am love this comic, and I'm going to miss it. Bro.