Worshipping The Wicked + The Divine #4

Or a look at body language and character design in WicDiv #4
by Kieron Gillen, Jamie McKelvie, Matt Wilson, and Clayton Cowles; Image Comics 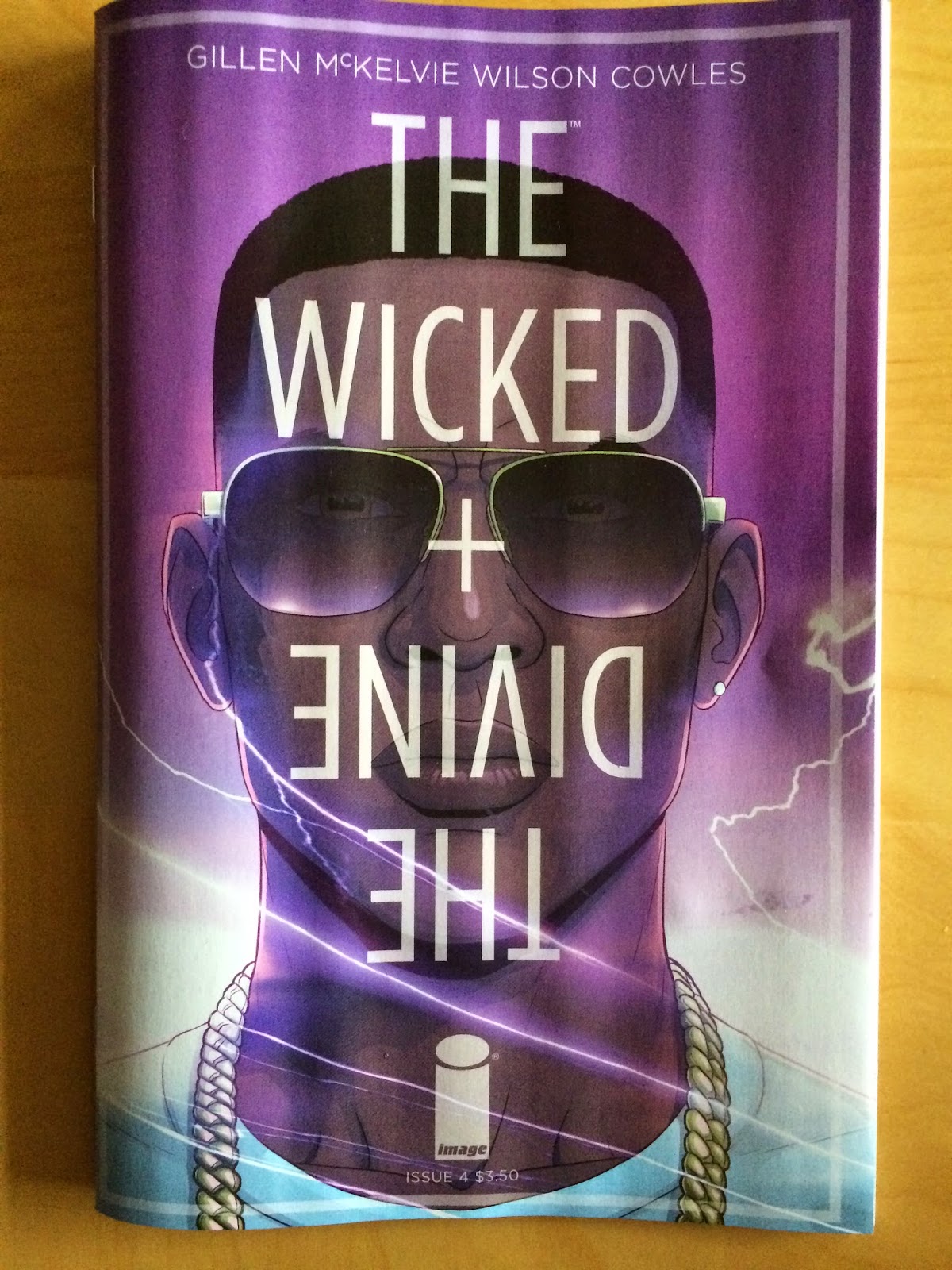 The Wicked + The Divine continues to be a comic I really enjoy. And while there are a slew of very dramatic or very meta elements that are amazing in the comic, I am maybe most impressed with just how technically great WicDiv is. There are just so many small elements in this comic that are executed perfectly to convey the maximum amount of information or emotion in every panel. This comic is beautifully crafted.

I'm going to highlight some more character design elements and how body language is used in WicDiv #4.

*SPOILERS* beyond this point. 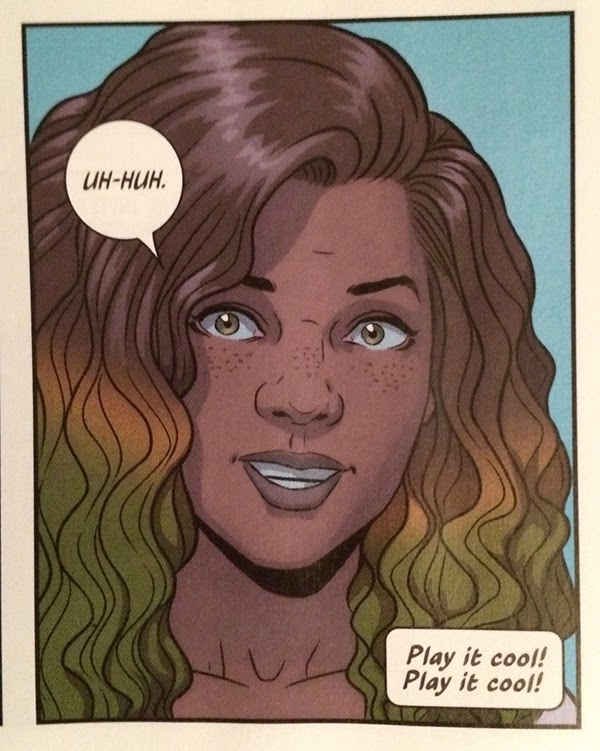 Before I dive into the more technical elements in the comic, I kind of want to point out just how delightfully, and maybe insufferably, clever WicDiv is turning out to be. The idea of having Lucifer languish in prison to suit the purposes of the other gods as a parallel to the story of Satan in hell is endlessly smart. The absurd mural of Baal is a perfect monument directly tying religious devotion to the kind of deeply narcissistic behaviour of certain male popstars who probably helped inspire Baal. And the fan-worshippy behaviour of Laura is so on the nose, so true to the fandom-experience of trying to write criticism about creators and a medium I love, that well, it's EERY.

But I think maybe the most instructive aspect of WicDiv remains the creative teams mastery of using character design, costuming, and body language to rapidly teach us about a collection of new characters. And I'd like to continue unpacking that. 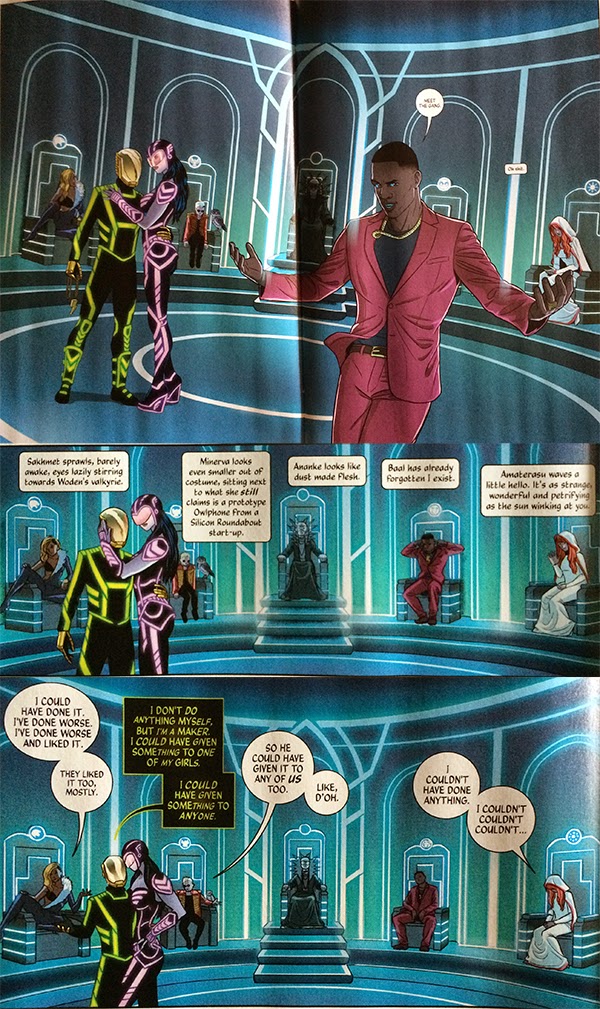 One of the main ways we communicate with each other is body language. As apes, or mammals even, we are wired to be keen observers of postures and gestures when trying to understand the people around us. Since comics are a visual medium, body language is one of the tools creators can use to communicate with us and especially to inform us about characters. WicDiv #4 has a great tour de force example of using body language to help us meet a bunch of new, or relatively new characters.

One of the main scenes in WicDiv #4 has Laura having an audience with a summit of the gods to plead Lucifers case. The summit shows the majority of the gods we've already met and introduces a pair of new gods. By having the various gods arrayed in thrones around the throne room, the scene invites us compare and contrast the body language of the various gods. Which in turn gives us a boatload of information about each of the gods.

Take Baal. Baal sits in his throne with relaxed, hands in lap, legs spread open. It's a posture of ease: Baal is comfortable here, unworried about the proceedings. It is also a posture that is pretty rude. This kind of wide stance is associated with male privilege, with not being worried about how much space you take up on the subway or whether your genitals are obviously visible in your displayed crotch. Baal's posture reflects that he clearly does not give a fuck what you think about him. In combination, this posture reflects Baal's power; Baal is powerful enough not to have to care about how he presents himself. And that kind of dismissive power is kind of sexy.

You get all of this from his posture.

And you can do this for all of the characters.

You can see how Minerva, small and perched on the edge-of-her-seat is watchful and attentive. The way she leans forward makes her look intense and focused which implies that she is smart and observant. (Her large round spectacles emphasize this further). Amaterasu has a defeated, hunched posture that when combined with her swaddling robes makes her look young, nervous, and powerless. As if she were a child averting her gaze from a scolding adult. Sakhmet sprawls languidly in her chair, clearly bored or uninterested in the proceedings, as if the trappings of earthly power are outside her interest. It is also a pose that reflects her innate sexuality and her feline aspects: even be-throned in a summit of the gods Sakhmet manages to look sexy. Ananke is seated above the other gods, regal and poised, reflecting discipline, power, and control. She looks powerful and queenly. And all of this is conveyed through body language.

Woden is an interesting exception to the rule. And I think there is meaning in this too. Unlike the other gods who are seated in thrones, he is standing, clutching one of his valkyries in a possessive manner. Woden is a craftsmen god (something reflected by the Daft Punk inspired helm and electronica music allusion), and his body language seems to reflect his pride in his accomplishments. He stands in a way that reflects ownership of his valkyrie, (ick btw) as if she were a craft of his that he is especially proud of. Also, by standing apart from the gods in a throne room of his making, his body language seems to be implying pride and ownership of the room. It is as if he is claiming credit for the diorama of the assembled gods in thrones as a thing he created. Also the fact that he is standing and apart from the other gods implies a rhetorical distance between him and the other deities, or at least a distance from the business of the disposition of Lucifer. It'll be interesting to learn more about him going forward. 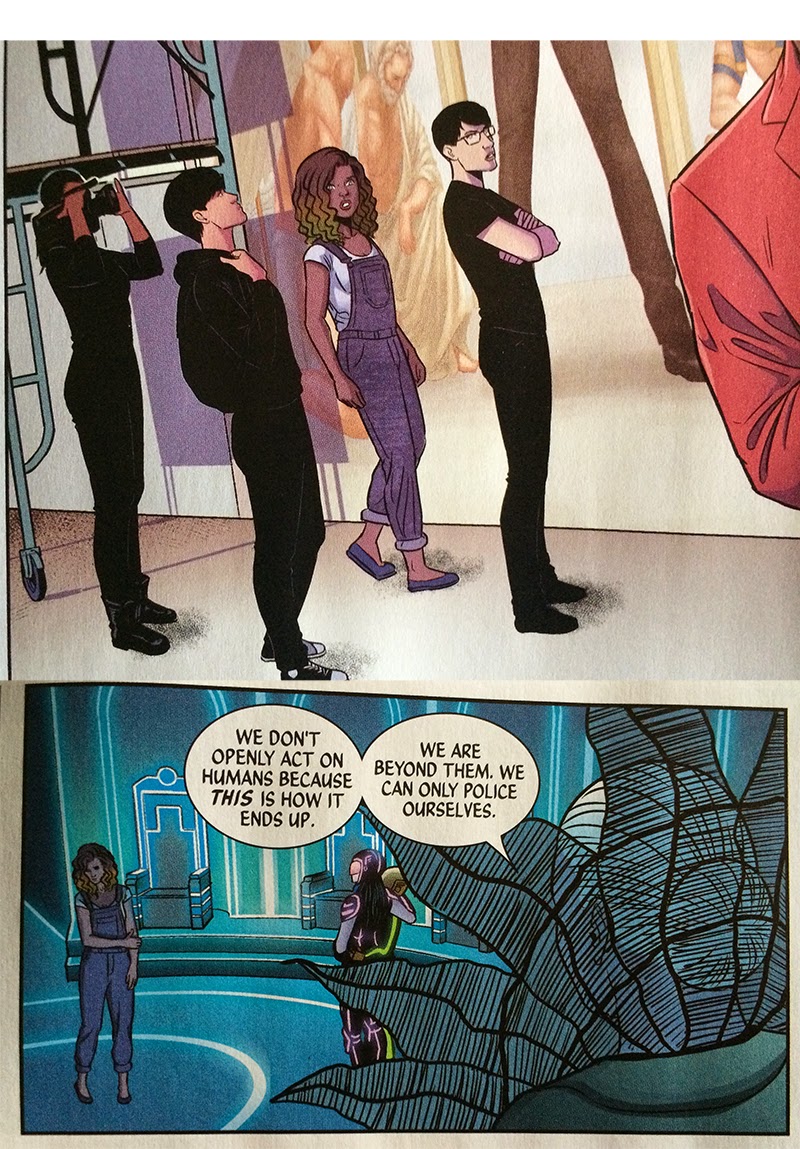 After reading WicDiv #3 I wrote a thing trying to unpack the character design of The Morrigan. It looked at how the characters three aspects had three radically different designs that rapidly conveyed information about each sub-character and made each of them feel unique. While the characters of The Wicked + The Divine wear clothes instead of outright costumes, the gods of the comic have fashion that very much blurs the line between fashion and stage costuming, and as such, their designs maybe share common DNA with more traditional superhero designs.

But you don't have to have to deal with elaborately costumed characters to have what they are wearing be informative and I feel like the outfit of Laura in WicDiv #4 is a great case in point.

Laura is wearing an outfit that is clearly clothing: she is wearing a white t-shirt under a pear of purple overalls. This is something that an ordinary person would wear. In fact, I think I remember hearing somewhere that overalls are coming back into fashion for women? I mean, I could be wrong, but I have definitely seen some very fashionable young women rocking overalls recently... Regardless, this is reasonable clothing for a realistic person.

Beyond being ordinary clothes, this outfit provides gobs of character information. Now, some of this might just be me having weird opinions about overalls, but I've always sort of associated them with children. My going-on-two toddler nephew has several great overall based outfits, for instance. On adult women, I find that overalls, due to their bagginess and ability to de-emphasize the physical characteristics associated with female sexual maturity, tend to make women look younger than they are. And for me at least, this clothing choice makes Laura look extra-young and extra-naive in the relevant scenes in WicDiv #4. It creates the impression that she is a child at a dinner party of adults when she has her audience with the gods; that Laura is deeply out of her depth when confronted with the maturity and depth of the divine characters.

Or at least I think so. 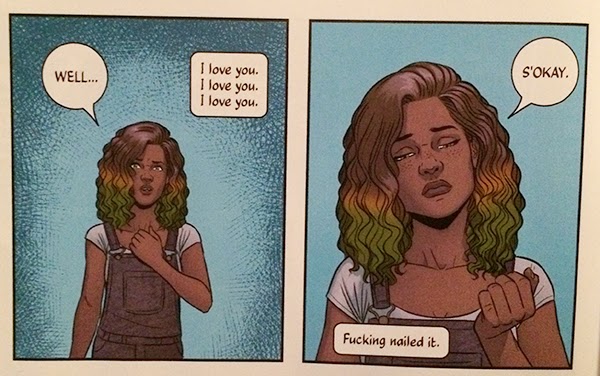