Or here are some podcasts you might enjoy (or here are things everyone already knows about). 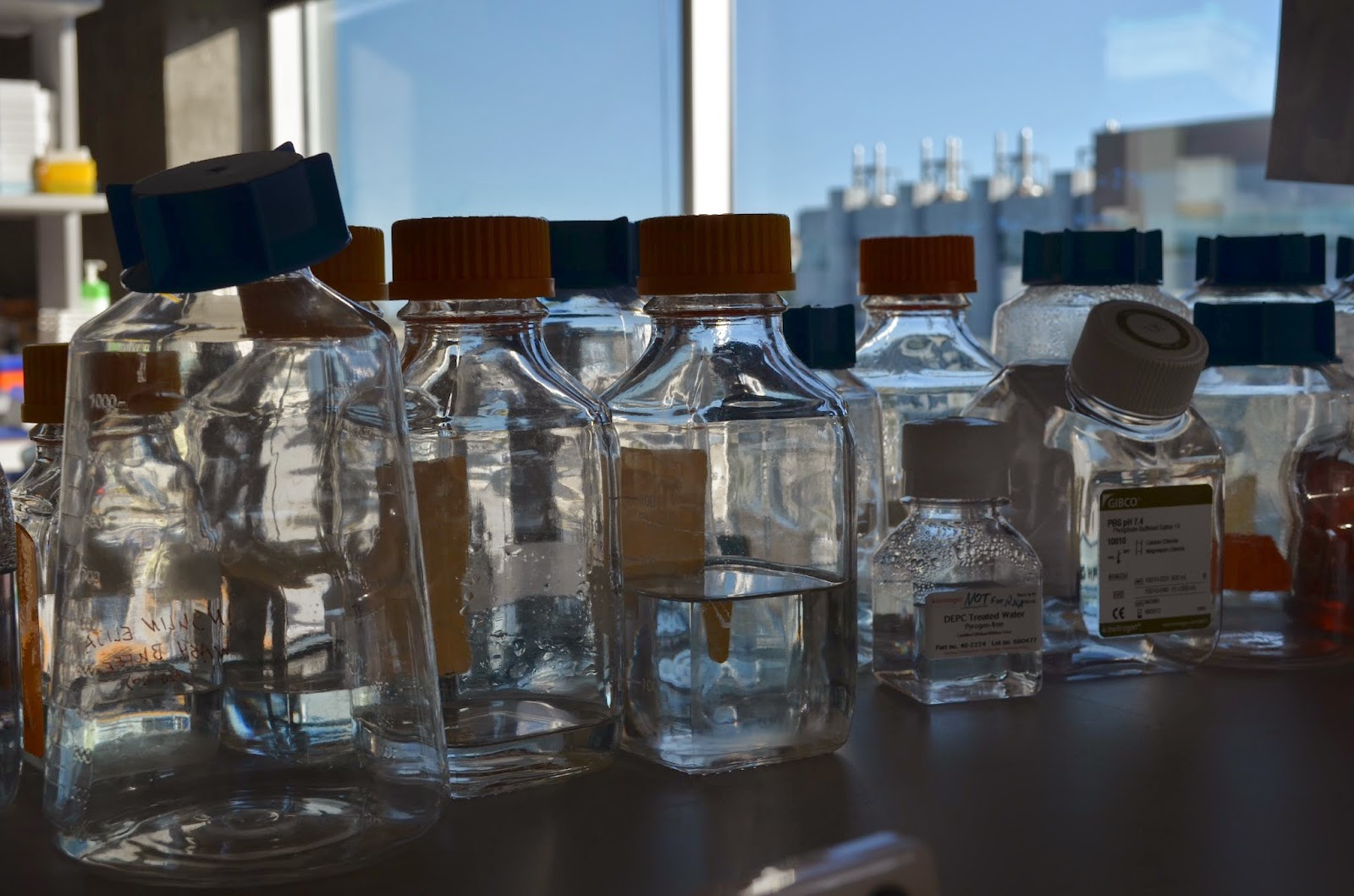 So, in my day job I'm a Science Graduate student who studies how heart cells link how much energy they are using to how much energy they produce. Overall I think it is pretty wicked cool stuff. As a day-to-day thing, though, Biology is mostly doing a lot of meticulous, repetitive tasks carefully, then waiting five minutes while a machine takes a picture or spins really fast, doing more vaguely dull tasks, and then staring at excel spreadsheets for hours to decipher some facts. The minutiae of the job can be a little boring. I mean, it's kind of the Best Job, but it's also one that lends itself to listening to a lot of podcasts while the magic happens.

These are some of my favourite. 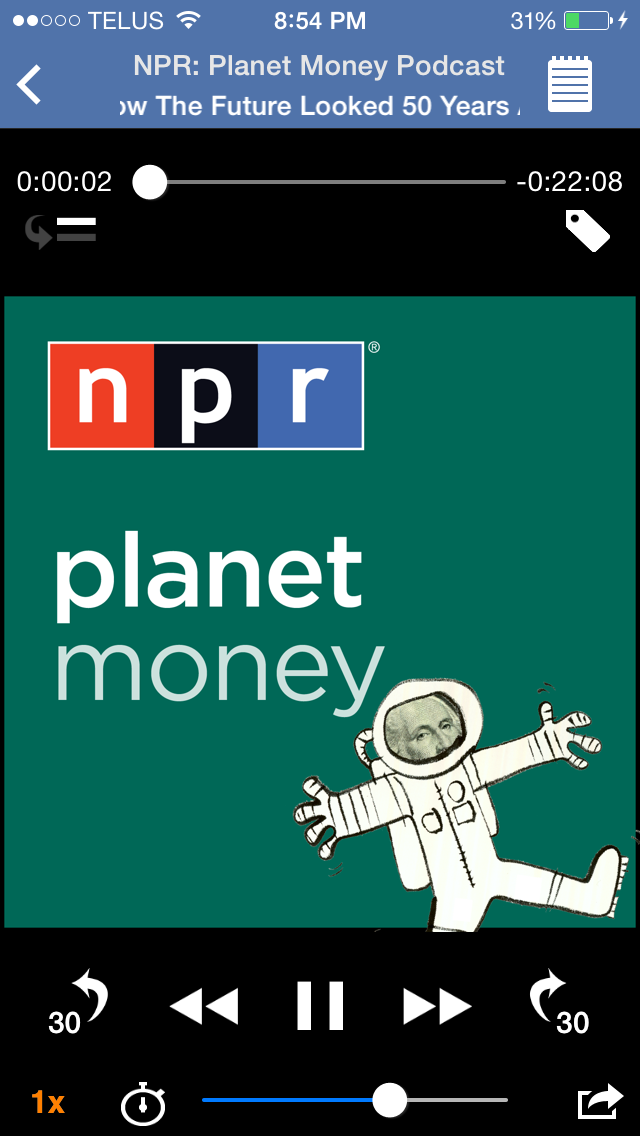 Planet Money: I think economics is interesting. I mean, at it's most base it's kind of disgusting since it tries to break down everything to a transaction, but, for better or worse, our world is driven by people wanting and needing stuff and doing things to satisfy those needs and wants. Having some idea of how the systems that govern the production, distribution, and wanting of stuff work seems like a really good idea to me. Because really, the systems and behaviour that economics tries to understand effects everything from how we get our food to what geek media is made. It's such a big deal! So I kind of love Planet Money since it's a journalistic enterprise that uses story-forward approaches to facilitate substantiative, approachable discussions of how econonmic-things work. And it's totally not boring, I swear! It listens as amusing stories about interesting events and stuff and then explains the economics of it in a way that is informative but doesn't really feel like a lecture. (Entertaining podcasts that are also somehow informative will be a theme here.) 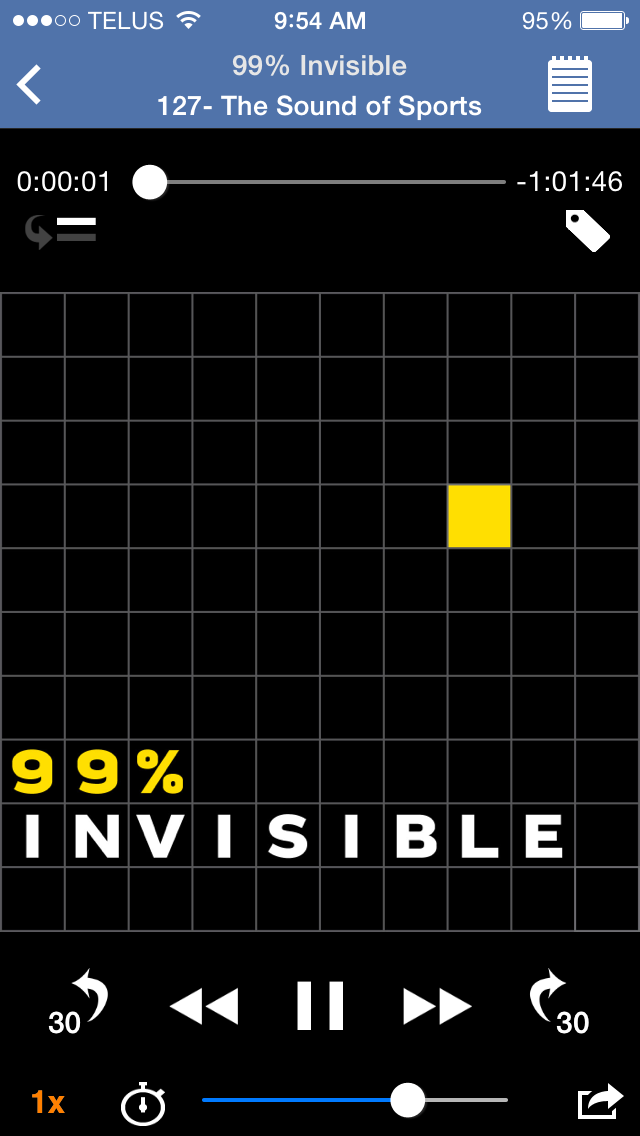 99% Invisible: In the same way I find economics interesting, I am deeply fascinated by architecture and design. The fact that pretty much every constructed thing had someone agonize over every aspect of it boggles my mind. And once you accept everything manufactured has been designed than it follows that everything about manufactured stuff is a choice and that most of those choices speak directly to function. Like, the QWERTY keyboard I'm typing this on was laid out in this arrangement so that the mechanical moving arms of ye olde typewriters wouldn't jam as often. And then there are all of the aesthetics that go into the design: it isn't enough for a thing to work perfectly it has to be pleasing to the senses as well. And all of that is human brain hours and talent at work. Everywhere. In everything! MIND BLOWING!! 99% Invisible is a podcast that tells stories about design and architecture and engineering. It focuses more on telling an emotionally effective narrative than education, but like Planet Money, manages to be super charming and effortlessly informative. It's "let's talk about this cool building or this historic mad inventor and while we're having fun or whatever, we've learned something". It's ace. 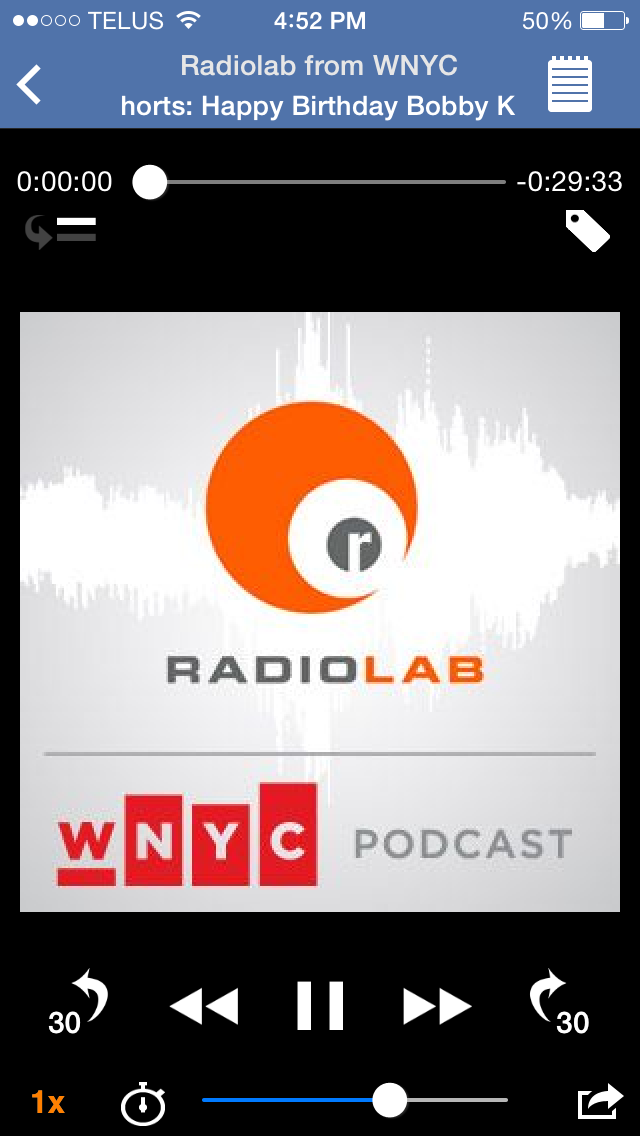 Radiolab: This is to Science what the previous two podcasts are to architecture and economics: thought provoking, narrative driven stories about interesting Science stuff. It's also just about the only Science podcast I can stand. I have a pretty fraught relationship with Science podcasts despite being passionate about Science. I find most of the professional Science-casts for Scientists too dry and too focussed on particular papers to enjoy. (While I find a summary of most research pretty cool, the nitty-gritty of individual studies that aren't in a field I'm interested in can be super dull!) These podcasts also have the problem of Scientists banging on about how great there research is and wildly over-selling their results without the all-important data that in a written format let's me tell if they are full of shit or not. It's like all of the worst parts of a Scientific journal article without any of the substance. On the other end of the spectrum, I find most Science podcasts for civilians too light on substance or focused on buzzwordy meme stuff to really get me interested. There is also the fact that Science Journalism tends to be kind of wrong about a lot of stuff, either out of lack of expertise or an attempt to be better understood, and it bugs me. Like how when someone leaves three seconds on a microwave and doesn't hit the RESET button bugs me: irrationally and deeply. Radiolab is the goldilocks of these situations: it presents stories that are genuinely interesting in an engaging way and provides a very scientifically literate discussion that is also really clear and easy to follow. (Being both accurate and understandable to a general audience when talking about Science is really hard to do well, and Radiolab absolutely nails it. It's something I think about constantly when trying to explain my own research.) Radiolab also beautifully demonstrates the discovery and question generating aspects of Science which really speaks to why I do this for a living in the first place. It's fantastic! 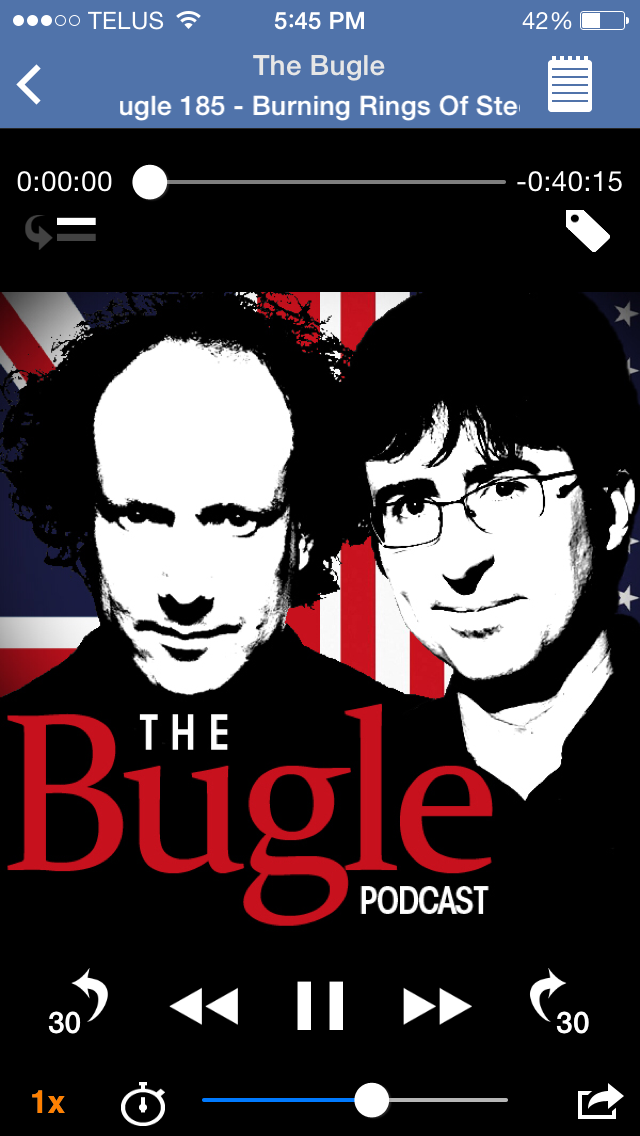 The Bugle: John Oliver, of HBO by way of The Daily Show, and his once-BBC comedy partner Andy Zaltzman have a long running world news satire podcast. I really enjoy well made satire of current events because holy fuck the world with all of its horror and corruption and madness. Sometimes you just have to laugh at the madness of it and sometimes you have to tell it to fuck right off and The Bugle does both with a lot of intelligence and comedic skill. The Bugle runs in the same vein as The Daily Show, with Oliver once-upon-a-time workshopping some stuff that ended up on the show, but with the deranged, slightly goofy antics of Zaltzman thrown in. The Bugle also casts a wider net for news, covering a lot more British and world topics than North American equivalent programs. Also, if there is someone in the world doing something amusing involving the drawing of a giant dick, they're going to cover it in detail. (It's a bit.. delightfully immature at times.) So if you like mixing your current events fury with biting comedy, uncouth humour, and dick jokes you ought to check it out. 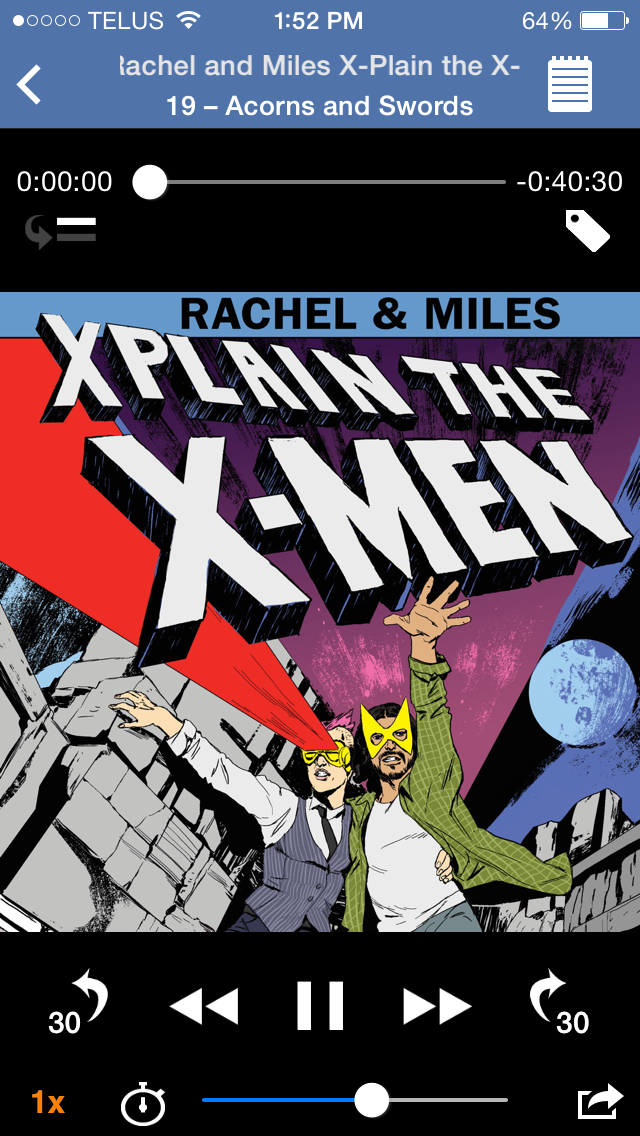 Rachel and Miles X-Plain the X-Men: I really can't stand most comics podcasts. Most of the ones I've tried either fall into the trap of people talking over each other, follow an interview format which I'm not crazy about unless I'm really into the guest, or spends huge amounts of time talking about non-comics related things which I don't really care anything about. There is also a really toxic amount of snark in a lot of comics media that bums me out. Rachel and Miles X-Plain the X-Men solves all of these things. The podcast seeks to explain the long convoluted, and frequently insane story of the X-men in all of it's flawed, glorious detail. The shows hosts, Rachel Edidin, who is maybe one of my favourite voices in comics journalism/criticism, and her partner Miles Stokes are both super charming and have a really great repartee which is immanently listenable. (I also 'ship them so hard. Squee!) The hosts don't stray too far off topic and have a pleasantly quick and dense delivery style which helps keep things interesting. Rachel and Miles also hit this perfect tone. While they poke fun at the comics and point out the aspects of the X-Men that are justifiably fucked up, they are clearly operating from a place of deep affection for the material which makes things feel like a pleasant experience and not grossly snarky. I really wish more comics podcasts could manage this level of production and just straight up welcoming atmosphere. 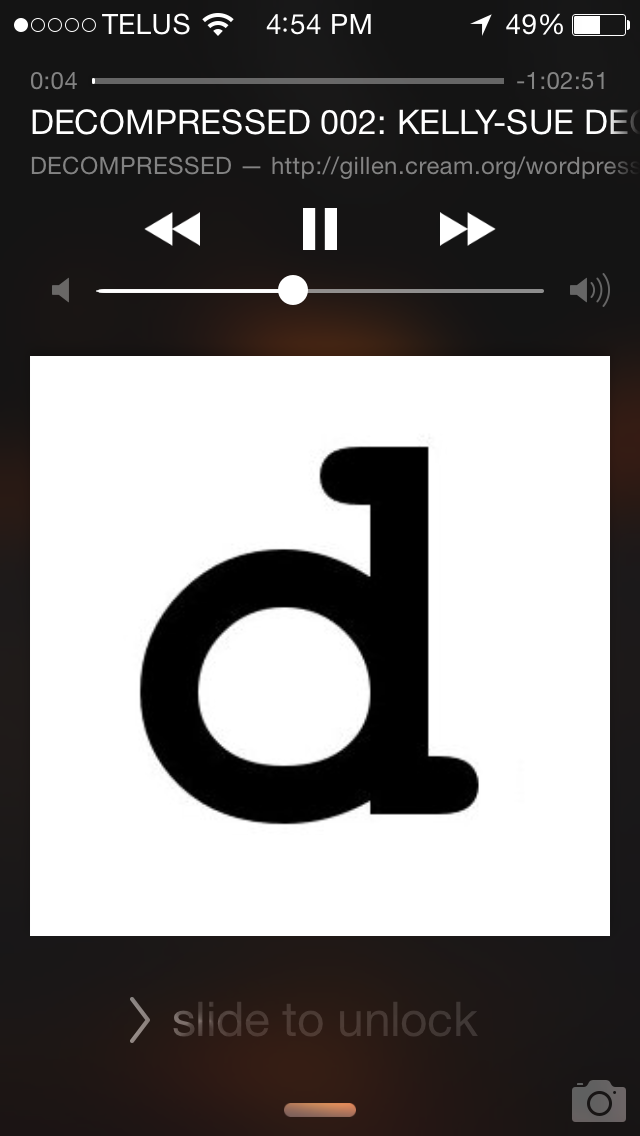 DECOMPRESSED: Is an almost-never updating podcast by Kieron Gillen who is easily one of my favourite comic book personalities. Basically Gillen interviews some other comics professionals and they talk about the craft and decision making that go into a particular comic or series of comics. Which if you are at all familiar with this blog, is kind of my jam. While the podcast almost never updates and my interest in it wavers depending on the guest and comic being discussed, the best episodes of DECOMPRESSED are essential listening. Hearing top talents go through why they decided to do what they did is endlessly fascinating and a great way to learn about how comics work and how to read them more critically. DECOMPRESSED also gets points because one of the first posts I made about comics story structure, which is one of the earliest things I'm actually pretty proud of even if I did it in kind of a dumb way (I was learning), was directly inspired by an episode. 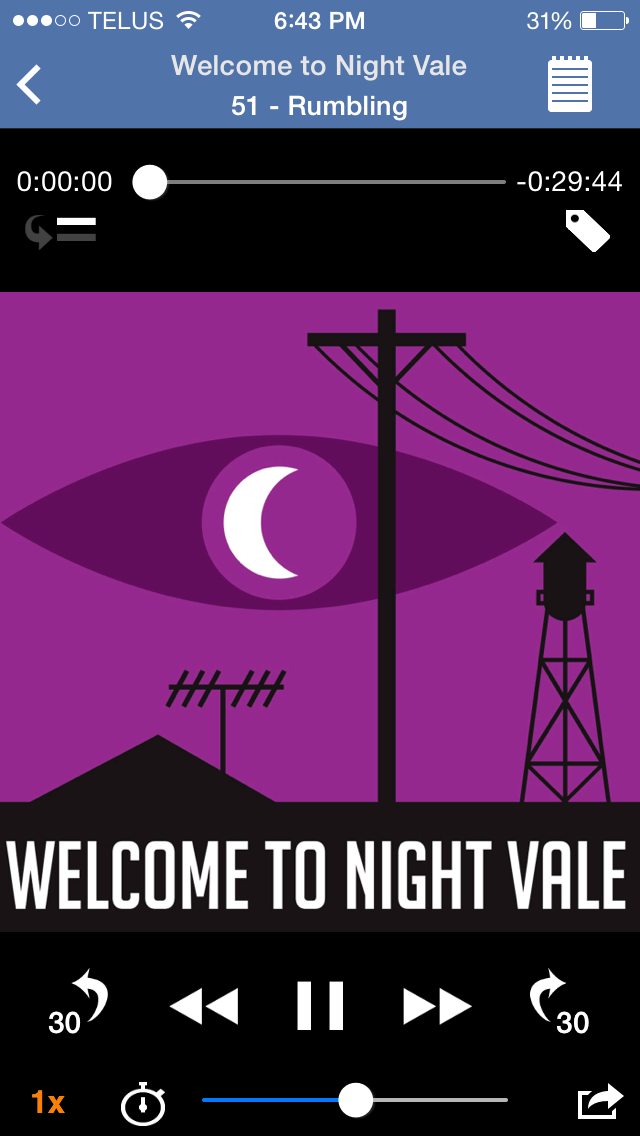 Welcome to Night Vale: Yes, I am a geek on the internet who likes podcasts, so obviously I'm listening to Night Vale. If somehow you haven't heard of this, Night Vale is the radio news from a fictional small town in a desert that operates by a variety of occult, Lovecraftian rules. Like, Night Vale's most recent mayoral election featured a literal five-headed dragon and the faceless old woman who lives in your house as candidates. Or that the town's dog park is forbidden to all but the hooded figures who congregate there. Or that the librarian's of the Night Vale public library are not be trusted and possibly the most fearsome creatures imaginable. It's a little creepy, a little whimsical, a little silly, and endlessly charming and well made. I don't usually enjoy fictional radio plays, but Night Vale is the spectacular exception to the rule. I feel like it's the kind of thing you will either adore or kind of hate, but if somehow you haven't tested the waters, you ought to give it a try.
Posted by Michael Bround at 08:00

Email ThisBlogThis!Share to TwitterShare to FacebookShare to Pinterest
Labels: 99% Invisible, Decompressed, Planet Money, Podcasts, Rachel and Miles X-plain the X-Men, Radiolab, Stuff I Like, The Bugle, Welcome to Night Vale