Or a look at the fine action sequence chapter in Zero: An Emergency chapter 4
by Ales Kot, Morgan Jeske, and Jordie Bellaire; Image Comics 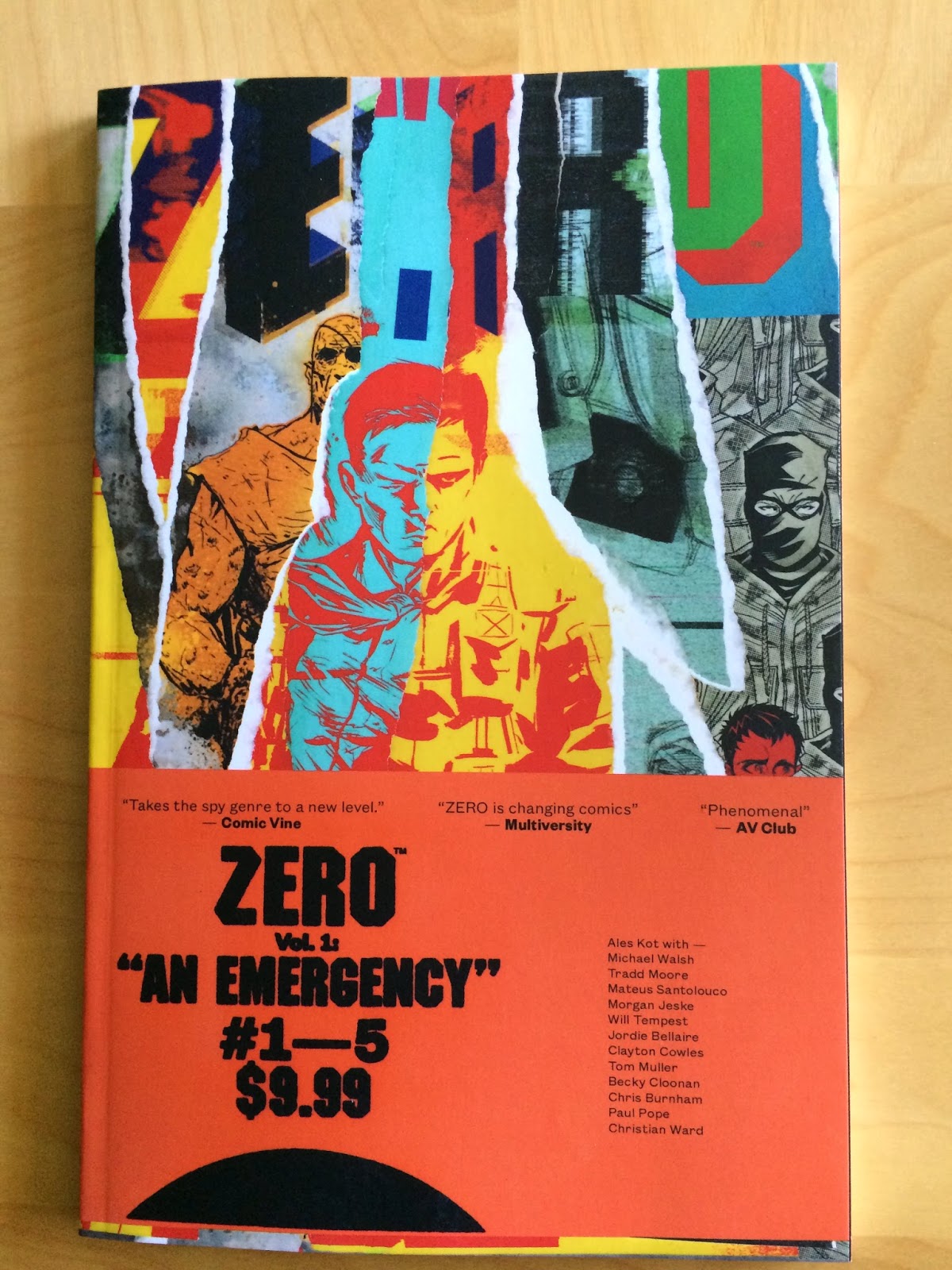 In a recent post about Moon Knight #5, a fantastic asskicking comic, I suggested that there might be a formula to making extended action sequences interesting instead of drawn out and boring. In Zero volume one, there is another great example of a lengthy fight scene done right. While it's interesting in its own right, I find this sequence particularly interesting because it follows the same basic make-this-fight-interesting rules as Moon Knight #5. Which is maybe worth taking a look at.

This post will have extensive *SPOILERS* for Zero Vol. 1, specifically the Fourth chapter (Zero. Issue #4 if you're an issues person). While I don't think this post will ruin the whole trade for you, since each issue kind of stands alone, it is probably better to not read this post if you have plans to read Zero. Okay? 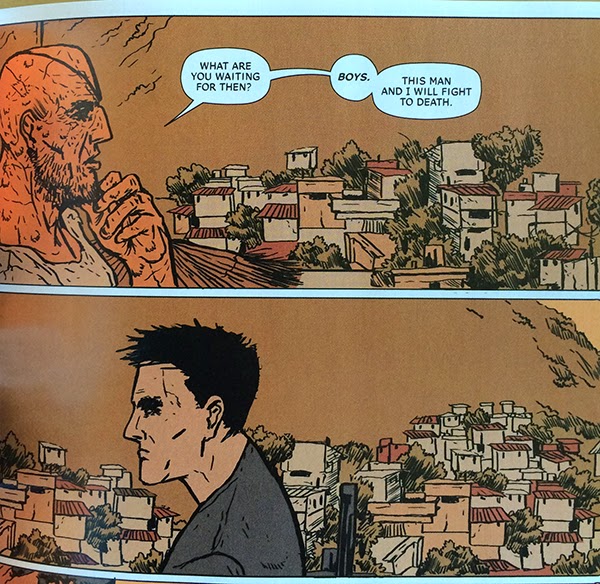 Rule 1: The comic must provide a clear and emotionally interesting reason for the fight. The argument here being, if readers don't understand why a conflict is happening it is difficult to get involved in it or if the reason for the fight is shallow the conflict will feel contrived and dumb.

Zero does a great job establishing the premise for the conflict. It is brutally clear: Agent Zero has been sent by his masters to assassinate the man with the eyepatch. His reason for doing this do not go beyond his masters wishes (Zero has been conditioned since childhood to be an obedient killer). Despite the initial simplicity of the premise, the emotional reasons for the fight are much more complex and delightfully transgressive. The man Zero has been sent to kill is a former agent who has found a worthwhile life following his escape and retirement from The Agency: he found love and, following its tragic end, has found meaning protecting and teaching child slum soldiers and improving their lives. In a way, this man represents the best possible future of Zero and yet Zero must kill him. So the emotional crux of the fight is that Zero must kill the eyepatched man for his masters, he doesn't have a choice, and yet it is against Zero's interests to do so. Basically this fight is driven by a deadly straightforward objective mired in the sordid context of Zero. It's great. 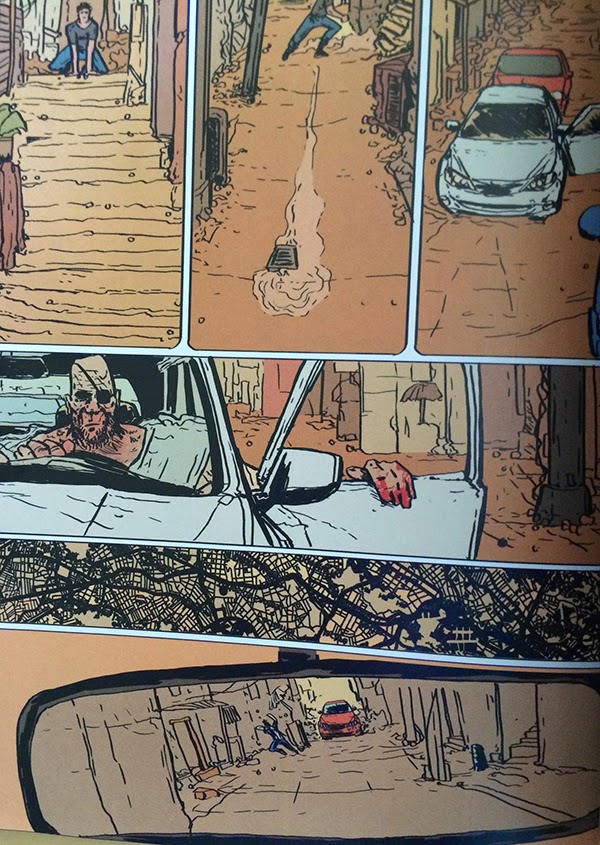 Rule 2: Fight scenes should have well defined and utilized settings to provide context to the action. Basically, readers can appreciate movement and better understand events when they are grounded in a place. This rule is less of an action rule, and more of just a comics one. Setting is super important.

Zero doesn't waste a lot of time establishing settings, but does clearly establish where events are taking place. Zero and the man fight on a rooftop in a slum built upon a hill. The fight turns into a car chase and then, while in a car tunnel, they crash and resume kicking the crap out of each other. It's a simple thing, but like a house foundation it provides the stability the story needs to work. 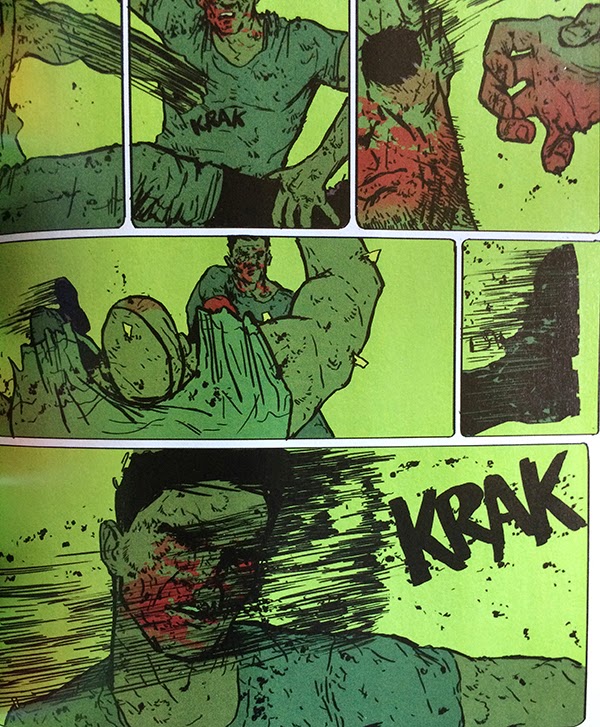 Rule 3: The action must be well composed to maximize kineticism, impact, and overall storytelling. This one is less a rule, rule and more a philosophy of approach. Action sequences are story chunks that rely almost entirely on the art for storytelling: these are dynamic regions where exposition just detracts from whats happening. So it is really important that the art be clear, interesting, and designed in a way that maximizes the motion and bone crunching impact of the depicted action.

Chapter four of Zero has a really brutal approach to fight storytelling. It uses disjointed panels, with wild perspectives to capture the feelings of madness and chaos of the fight while still being clearly readable. The comic also tends to emphasize on moments of impact, with the actual motions being somewhat peripheral to the blows. Take the kick in the above sequence which begins in the back corner of the fourth panel, is highlighted in a small, tight fifth panel, and lands with brutal effect, ghost quick in the sixth panel. It is clear that a kick is happening, but we get this information in a glimpsed, wild way that ends in a face-breaking blow. It's an approach to story telling that is emotional, heavy, and interesting.

Rule 4: The fight should have consequences. By which I mean, combatants should get hurt. In the real world violence carries awful, immediate consequences in the form of brutal injuries and if you want your fight to feel real and important and interesting it should reflect that. Now, clearly there are places where brutal injuries don't make sense, but in those instances it is imperative to create other stakes for the conflict. Basically, no one wants to see two invulnerable people hammering at each other with no damage to themselves or dramatic consequences.

Zero is a comic where cringe-worthy injuries make sense. And the action sequence in chapter 4 is appropriately gruesome. Agent Zero and his eye-patched adversary bleed, break, lose teeth and generally get fucking destroyed as they beat each other to death. All of this action then culminates in the eye-pathced guy cutting out zeros fucking eye with a fucking shard of glass before Zero turns the tables and stoves his opponents skull in with a car door. This is fucking brutal action at its best/worst. 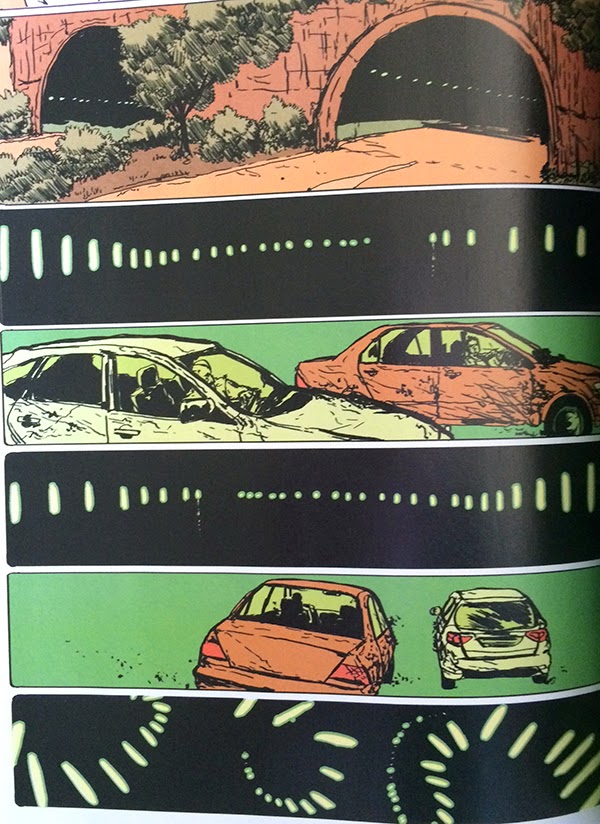 Rule 5: Be interesting. Look, there are a lot of comics out there that have fighting and car chases and action in them. As a result readers see a lot of action sequences. A lot. So it is really important that any extended action sequence does something interesting. That is always doing something new, never wallowing in repetition or, even better, it's showing the reader something they haven't seen before.

Zero chapter four manages to be a very interesting action sequence. The disturbing premise of the fight gives it emotional depth, the simple and evolving setting keeps things varied, and the well composed, brutal action is fascinating and horrifying to look at. It's a really well done sequence that is engaging to read. Chapter four of Zero also manages to show me something I haven't seen before in a nifty way. This sequence above which depicts Zero pursuing Eye-patch guy into a car tunnel, crashing into him, which sends the pair tumbling in a massive accident that is really smartly portrayed. I particularly love the way the tunnel lights are used to establish the mood and speed of travelling through the tunnel, and then how that order is subverted and reapplied to convey the chaos and motion of the crash. It's great comics.

So the extended action sequence in Zero Vol. 1 Chapter 4 is pretty great and is another great example of how to keep prolonged fight scenes interesting. 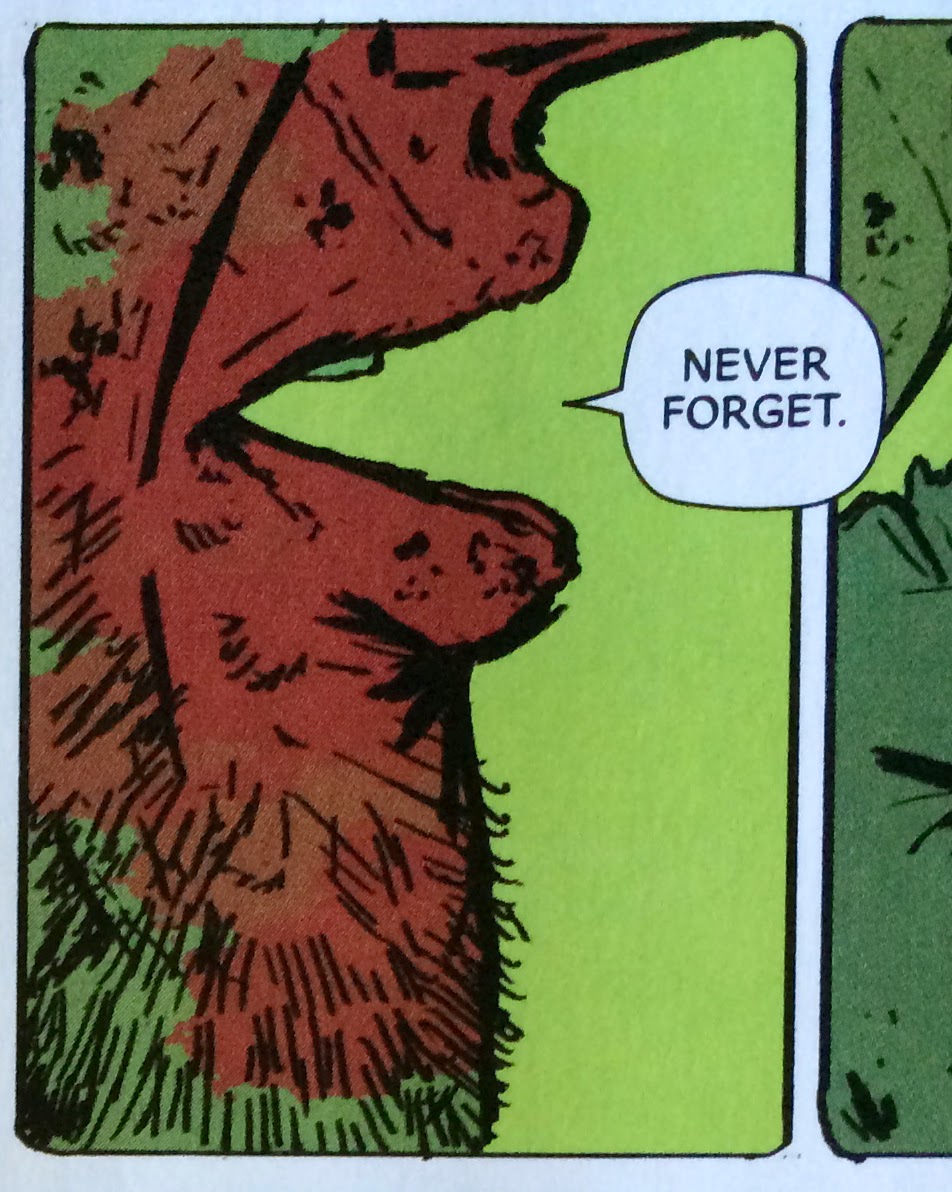