Variety Is The Spice of Comics Pt. 1: Pony Up

Or how variety in comics is amazing and generally a good idea.My Little Pony Friendship Is Magic #1 sold very well. Apparently top twenty comics for the month well.

I think this is interesting.Frankly, it's interesting in a lot of ways. It is interesting that yet another book that directly ties in with a successful television program does well (a la Walking Dead). It is worth noting that this book was targeted at children and did very well in a market dominated by adults. Bronies, as a phenomenon, are endlessly fascinating. But I'm most interested in how the high sales of My Little Pony tell us about audiences.

Okay, now this entire argument is goin to hinge on two generalized assumptions, and I'd like to throw out some caveats before we get going so I sound a little less stupid.

(Is anyone still reading this?)Okay: without further waffling these are the assumptions I'm making:
Alright, so this is the complete list of the 25 top sellers by Diamond Distributers in November (1):

If we graph this list by genre we get: 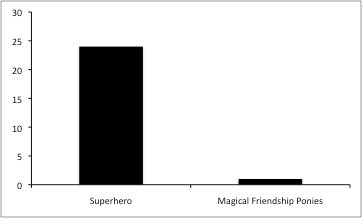 And if we graph them by audience we get: 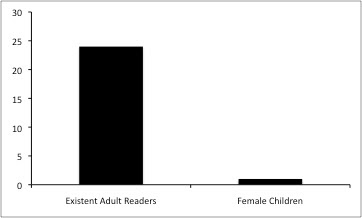 Is it really a surprise that My Little Pony Friendship is Magic has found an audience?
Look, I think the world, well, north America, often forgets that comics are a medium and not a genre. Which is to say you can tell any kind of story and not just superheroes. And while clearly Superhero comics are popular, books that target other audiences can eche out success.

Which I think speaks to a bigger and maybe overlooked issue: everyone who wants to read superhero comics already is. They are also already spending all of the money they are willing to on Superhero comics. By making a comic that is not a Superhero comic you potentially target a different audience with money to spend, or the same audience in a different enough way that they may justify spending additional money. (See eventually upcoming pt. 2 for more on this idea).And at the end of the day, I think the value of genre diversity is the lesson of the success of My Little Pony Friendship is Magic #1.

Email ThisBlogThis!Share to TwitterShare to FacebookShare to Pinterest
Labels: Graphs, My Little Pony Firendship is Magic, Variety is the spice of comics, Waxing Philosophic