Or why Brian K Vaughan and Fiona Staples are the solution to all our comics problems.There are, in my view, a number of things I wish were better about comic book publishing. In no particular order here are some of the things about comics that I am not excited about: 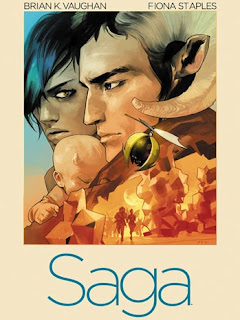 A recent interview by Brian K Vaughan at the The Comics Beat about Saga has some interesting quotes that make me really very excited:

"Not to brag—maybe a little bit—but the biggest surprise is how much fucking money there is in truly owning your own work."

"I loved working for my friends at Marvel and DC, and I was always compensated with a very generous upfront page rate, but by betting on myself (and Fiona!) and waiting for money on the back end with Saga, I’m already making way, way, WAY more than what I made on comparably selling books that I wrote for other companies.  And that’s after splitting everything 50/50 with my richly deserving co-creator."

"That cushion blesses me me with a little extra time to give each script 100%, and more importantly, it means we won’t have to use any fill-in artists.  At this stage, I can’t imagine collaborating with anyone but Fiona on this story."

"I don’t know, I guess $9.99 seemed like a pretty fair price for the introductory volume of a new series. Maybe it will cut into our revenue stream, but I’m more interested in getting our story into as many hands as possible than in wringing as much cash as we can out of folks.
Fiona and I would probably be making more money in the short term if we filled the monthly book with annoying ads, or cut the page count down to 20, or charged $3.99 instead of $2.99, but I like to think that giving people more for less buys us a lot of valuable reader loyalty in the long run."

So by my estimation, Brian K Vaughan and Fiona Staples seem to be solving a bunch of my comics problems with Saga:

Hyperbolic claims about BKV and Staples saving comics aside, I think it's really exciting that a high quality, original, indpendent book by top tier creators is doing so well. It's even better when this success comes with all the things I just discussed. I can only hope that Saga continues to make a splash and the comics publishing community takes some lessons from it.

Of course, Brian K Vaughan and Fiona Staples are not exactly any-avergae-comics-person. Their sales numbers don't exactly reflect the reality for a lot, or even most, independent comics makers and few people have the perennial selling power, cross media clout, or raw talent that Vaughan does. So, I'm not sure the awesome reality of their publishing experience is the beating pulse of everyone. But it's encouraging and, who knows, maybe some of it'll catch on?

Regardless, I am SO excited for Saga Volume 1. Waiting is killing me.