I really enjoyed The Avengers movie: it was a big fun comic book rendered into film that managed to be smart (enough), funny, and very very charming. Joss Whedon and all involved have my undying thanks.

It should be noted we are going to SPOILER town.1

Despite how much I enjoyed The Avengers, one nit-picky thing about the movie still kind of bothers me. It isn't Ironman throwing a nuclear weapon at alien invaders or the alien invaders all collapsing enmasse upon the closing of the wormhole thing. It's that they failed to capitalize on the stupid number of chances they had to introduce Carol Danvers, the woman who gets alien Kree warrior powers (through whatever means) and becomes, in her current iteration, Captain Marvel.

A key part of the Carol Danvers/Captain Marvel mythos is that she was a fighter pilot before the accident/magguffin that granted her super powers. The Avengers movie took place on a Helicarrier, basically a flying aircraft carrier, and featured at least THREE speaking parts for pilots.2 One of these pilots really ought to have been Carol. A simple female voice (distorted to allow for future casting choices) for one of the pilots could have been a nice Easter Egg for Danvers, instead of the generic southern-esqu pilot voices they used. Even a simple background shot of a woman fighter pilot, or a plane with Carol Danvers stenciled on it would have been awesome.

Of course, in a perfect world, the pilot who dropped in and fired on the Hulk in close quarters, which was a particularly brave, skillful, and  crazy thing to do, was Carol. In my imagination it was her. 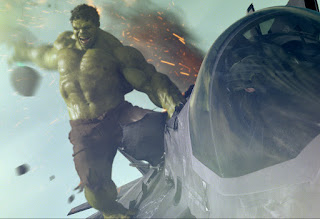 Now, the other two pilots I’m thinking of were involved in nuking New York city, so they are questionable choices to be Carol (although, a story beat about her following orders/redeeming herself might be cool?). Also, Marvel may want to make her an astronaut or something for future movies. So you know, I’m willing to give some time on this. My point, though, is that Marvel really needs to have more female movie superheroes, Captain Marvel (Carol Danvers) ought to be one of them, and they totally missed a chance to start seeding her into the universe.

1: Population: frowns
2: It’s been a while since I saw the movie, so it may have been four. Although, one of the four I am thinking of was a transport pilot instead of a fighter pilot. I’m 90% sure that three fighter pilots had speaking lines.
Posted by Michael Bround at 01:06