Or my thoughts on Marvel NOW! 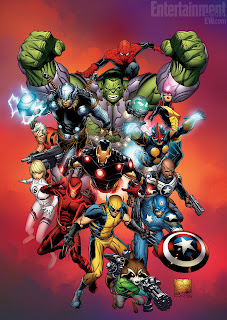 So Marvel NOW!, Marvel’s newest scheme to win marketshare from DC, has arrived. Hurrah. Basically, the idea is to wrap up a bunch of their books and roll out new , relaunched on-going titles over the next few months. Marvel NOW! will also see the movement of creators  to new titles as well as a reshuffling of characters onto new teams  with a general strategy towards reintegrating the quasi-segregated sections of the Marvel Universe (X-men, cosmic, and Avengers characters all together). Also new (kind of ugly) costumes.

Is it a way to boost sales by launching new number ones? Yes.

Is it the result of authors who have written the same title for a very long time wanting to move on? Probably.

Is it about attracting new readers? They’d like to think so.

Is it about reshuffling creators and characters in a way that’s about highlighting properties for trans-media utilization? I wouldn’t put it past them.

But here’s the thing, I think Marvel NOW! is mostly about resource management. All other potential benefits are secondary.

Something that I’ve noticed (and I suspect nearly all comics people have noticed) is that Marvel seems really keen on double-shipping books every month. So where historically, you’d get your Captain America once a month, Marvel now intends to publish two every month. It’s kind of brilliant. Marvel, in this scheme can publish only their most successful characters, and pool their artists and writers onto a more focused line up and still sell as many (if not more) books. It also forces readers to pick up two books for every on-going they want to follow, potentially doubling the revenues/fan.

(The problem (well one of the problems) with this approach is it assumes that the reason that a fan buys x number of comics a month is because of limited interest in other comics/characters. Basically, they think fan only reads Ironman, Spiderman, and Thor because fan is only interested in those three characters. I’m sure there are people out there with this mindset and that they must be very happy with double publishing. That said, I suspect the majority of comics fans are in a situation where they buy x number of comics a month due to having a limited amount of disposable income to spend on comics. They are already spending all of the money they can/want to on comics. There isn’t any more. As one of those fans, I’m kind of annoyed by this as it forces me to choose between exceeding my budget or cutting the number of ongoing titles I read still further. I think Marvel may see a point of diminishing returns with this approach.)

However, to make this double shipping work, Marvel needs twice the content from creators per month. Now writers can only write a finite number of comic books a month. From what I understand, and for sake of argument, let’s say a comics writer can manage 4 books a month. In the old days, such a writer could potentially write 4 different books, but in the twice-a-month Marvel NOW! age that writer can only keep up with 2 on-goings. Marvel now needs at least twice as many writers for the same number of titles. Similar problems with creator logistics exist throughout the creative teams of comics: pencillers can do ~1 book a month, inkers are about the same, and colorists can do maybe two? (I have no idea how long it takes colorists… it’s kind of alchemy to me). The point is that for every title Marvel now needs twice the people hours of work.

I think Marvel NOW! is the result/means of ensuring sufficient people hours per title. Marvel has to streamline their publishing catalog or else hire many more creators. They also have to reduce the title load per writer (Fraction can’t simultaneously write Mighty Thor, Invincible Ironman, Hawkeye and Defenders + Event stuff + a Creator Owned project or two in Marvel NOW!, for instance)1 and set up artist rotations on all of their books (since very few A-list artists can, or want to, churn out two books a month). If I were trying to reset the entire creative machinery of The House of Ideas, a systematic role-out of new titles coupled with the ending of older unsustainable projects is exactly how I’d do it.

So yeah, I think Marvel NOW! is more of a technical, logistical overhaul than a creative one.

And no matter how Marvel NOW! works out, it’s certainly going to make maintaining a top-ten comics list/buying pattern (and this blog) more interesting for a while. So thanks?