In Theory The Iceman Cometh

Or a Scientific Treaties on the Plausibility of Mr. Freeze

I think Mr. Freeze is one of the more interesting characters in Batman’s Rogues Gallery. He has a cool gimmick (ice powers, has to stay cold to live), a chilling and tragic backstory (gets powers from lab accident while trying to cure terminally ill wife),1 and like all of Batman’s best villains Mr. Freeze acts as a foil for the caped crusader (loss of loved one motivates revenge instead of heroism). He is also one of the few Batman villains who can contend with Batman both intellectually and physically making him a good candidate for being a major villain in a potential future Batman film. Unfortunately, due to his supernatural/sci-fi nature and his campy Batman’66 and Schumacher escapades, it is very unlikely we will ever see him in another movie.2

I’m here to tell you that Mr. Freeze does not have to be campy and unrealistic. In fact, with some relatively cosmetic changes, Mr. Freeze can be made into a serious and Scientifically plausible villain.

An extensive treatise follows after the cut:


Actually, before I start I want to say that I don’t think making Mr. Freeze plausible necessarily makes him a better character. My favourite portrayal of him, unsurprisingly, is from Batman The Animated Series which embraces his more fantastical elements but grounds his character in human tragedy and an icy obsession with revenge. While making him more plausible might make him more palatable to a modern audience, it’s really his sad story and chilling character that make him interesting (and not his powers). But I figured out a way to make him Scientifically plausible, and I’d like to share it.

For the sake of inclusiveness, I’m going to try to keep the Science in this essay as basic as I can and be as descriptive about it as I can be. I apologize if this makes things insultingly simple or slow moving. I also apologize if this still ends up being confusing and jargon-speaky.

So here’s my theory:

For any of this to make sense I need to explain some basic things about chemistry. Most chemical reactions don’t spontaneously happen at room temperature or even at body temperature.3 This is because stuff in nature tends to exist in a pretty stable form (nitrogen gas and carbondioxide are so stable that they are nearly inert). This is because unstable things in the environment typically undergo chemical reactions to become more stable (iron plus oxygen becomes rust, for example). If you want to make stable things react, or build big complex and unstable molecules (like those that makeup our bodies) you have to use a lot of energy, which is why most laboratory and industrial chemistry happens at boiling temperatures. Here’s the thing though, our bodies need A LOT of complex chemistry to happen at room temperature to keep us alive.

Enzymes, like machines, have an optimal temperature to function at. If things get too cold enzymes stop working very well. They can become inflexible and have their moving parts immobilized or the temperature could be too low for its chemistry to happen at all. If things are too hot enzymes, which are made of protein, tend to melt or break into pieces (thinkegg in a frying pan). This is why we control our body temperature so carefully: we want our enzymes to work their best to make energy, send signals, move electrical ions around, make us move, etc. This is also partly why extreme fevers and hypothermia kill us. 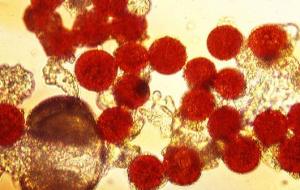 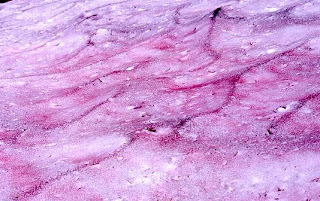 Here's the thing though, there are a bunch of living things that survive (and thrive) in subfreezing temperatures and have body temperatures  below zero degrees celsius.4 Arctic blood algae, deep water fish, and arctic bacteria and fish are all extreme cold survivors. These are called psycrhophillic (or cryophilic) organisms.

Psychrophilic organisms mange to live in inhospitably cold conditions because their enzymes have been optimized to function at subzero temperatures. There are a variety of ways these enzymes are adapted to the cold, but one of the most common ways they are modified is to be more unstable. This makes them move around more, even at low temperatures, which allows them to make more chemistry happen even at freezing temperatures. The downside of this is that these unstable enzymes fall apart at moderately warm temperatures. This means that the same enzymes that allow a psychrophilic organism able to live in the cold also make them incapable of tolerating warm temperatures or even normal temperatures (much like a certain Mr. Freeze...).

So basically, my idea is that Mr. Freeze has made himself into a semi-psychrophilic organism.

Victor Fries, MD PhD, is a brilliant doctor and neuroscientist with a special interest in neurodegenerative diseases. You see, his dear wife Nora, has been diagnosed with Huntington's disease: a terrible neurodegenerative disease which involves the accumulation (clumping, basically) of a super-stable mutant version of the brain protein Huntingtin (HTT for clarity) which builds up and kills brain cells.6 Victor makes curing or treating Huntington’s Disease, his wife's sickness, his life's work at Gotham University Hospital.

Victor becomes interested in experimenting with different mutant versions of HTT that have different stabilities to understand how HTT aggregates and is normally broken down. He is also interested in seeing if adding an unstable version of HTT to the superstable disease form will stop or slow the buildup of HTT clumps in brain cells.7 To test this idea Victor engineers an unstable, phychrophilic version of HTT protein (which can be done using live cell screens)8 and begins to use viruses (Adeno Assiociated Viruses)9 to genetically modify Huntington's mice10 to contain this gene to test his idea.

Unfortunately for Victor, science is expensive and staying funded is hard with a sick wife and little interest in publishing. What's more, his biggest donor, the Wayne Foundation,11 pulls its funding as questions arise about the ethics of his work. This forces Victor to look other places for money. In return for discrete medical services, Victor accepts money from the mob to fund his research.

One night, in darkest hours of the morning, his mob contacts bring him a man with multiple gunshot wounds and tell him to save his life. Dr. Fries does his best, but his patient dies on the table. Unfortunately for Victor, the dead mobster is the son of a high-ranking member of one Gotham’s crime families.12

In a fit of rage the father of the dead mobster and his enforcers descend upon Victor’s lab while he is injecting mice with his psychrophilic viruses. Mobster-dad blames Victor for his son’s death and wants back all of the money he paid Dr. Fries for medical services with added interest (“Call it a malpractice suit”). As collateral Mobster-dad kidnaps Nora, Victor’s wife. Victor tries to stop them from leaving by accosting the enforcers with a nearby disposable scalpel. After getting a cut in, he is beaten down and, to teach him a lesson, the enforcers inject him with his own phsycrophilic DNA virus. The scene ends with the Mobsters disappearing into the night with a terrified Nora.

Victor rapidly begins to experience symptoms of being infected with his virus (AAV) and knowing that he is about to become very sick from the psychrophillic DNA being added to his body (sick because psychrophilic proteins unfold/fall-apart at normal temperatures, and too many broken proteins in a cell is toxic).13 Knowing time is of the essence he builds himself a refridgerated suit (think less art-deco-robot-suit and more parka-with-a-liquid-nitrogen-tank). Arming himself with a handgun and a jury-rigged liquid nitrogen gun (fed from his tank) Victor Frieze goes to save his wife.

In my version, Mr. Freeze is not keeping his body ice cold, since that would kill a regular human being. Instead, his suit keeps his body at ~2-5 degrees Celsius14 so that the psychrophilic HTT proteins remain active and okay and yet it's still warm enough for Victor to keep himself alive. Also in my take, Mr. Freeze would constantly feel the cold, and, as a result, be perpetually uncomfortable.15

Anyway, Victor goes to free his wife from the mob, violence breaks out, the police and Batman try to intervene but Nora dies anyway. Victor escapes, swears revenge on the mob for kidnapping his wife, the university and Bruce Wayne for cutting off his funding and driving him to the mob, and the GCPD16 and Batman for failing to save his wife (all in a projected guilt sort of way). Science and cold themed acts of violence ensue and….

(Apologies if that got a bit fan-ficky).

So there you have it, a gritty and, while very very improbable, Scientifically possible Mr. Freeze.

1: Apparently not in the new DCU, but I prefer the Batman The Animated Series iteration… so...
2: Of course, we all said that about Bane too…
3: Or they do happen, but very slowly in teeny tiny amounts… which isn’t very practical for most things.
4: If you’re curious they do this by stabilizing transitionstates, orienting substrates (the chemicals that react) optimally for reaction, and providing the electrostatic conditions needed to activate electrophiles/nucleophiles.
5: Really, really cold in Fahrenheit.
6: A MASSIVE over-simplification.
7: It’s worth noting that I’m not a Neuroscientist at all, so this could be hugely inaccurate… but based on some of what I know I think it’s okayish.
8: I’m not sure exactly how this would work, but similar screens are used to make the enzymes they use in cold water laundry detergent and other everyday things, so it could work.
9: AAV are wicked cool. They can infect most cell types, different strains of the virus prefer different tissues so you can target the heart or spleen or brain, and AAV’s add foreign DNA to a host’s genome into specific sites stably. In not jargon speak, AAV’s let you safely turn DNA you make into a permanent part of an organisms native DNA. Or more simply, it makes genetic engineering in adult people or animals doable. In real life.
10: There are mice that make something like the disease causing Huntington’s Protein and model the disease (the mice walk funny and experience other disease symptoms). This let’s researchers study Huntington’s disease and test cure strategies out (since it’s not okay to test medicine on people).
11: The Wayne Foundation being the philanthropist organization of one Bruce Wayne, aka Batman.
12: A Falcone or Marcone or whoever it is in the New 52…
13: His virus uses a CMV (Cytomegalovirus) promoter to drive the expression of his Psychrophilic HTT protein. Basically, a promoter contains a DNA sequence that regulates how much messenger RNA and therefore protein gets made (usually, but not always). The CMV promoter makes A LOT of mRNA and A LOT of protein. Scientist’s use it when they just want to make a lot of a protein or see what too much of a protein does in a cell.
14:  Just above the freezing temperature of water.
15: He would wear his trademark goggles to keep his eyes warm.
16: Gotham City Police Department.