Or a look at the use of girds in Spider-Woman #9 and Southern Bastards Vol. 3
by Dennis Hopeless, Javier Rodriguez, Alvaro Lopez, and Travis Lanham; as well as Jason Aaron, Jason Latour, Chris Brunner, and Jared K Fletcher, respectively. 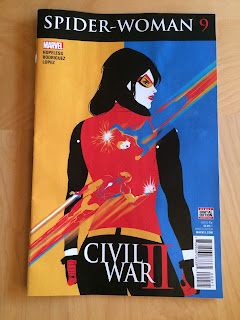 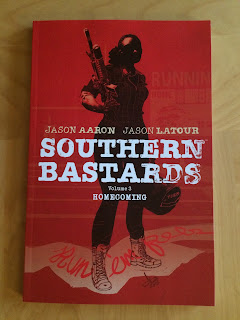 One of the most basic units in comics storytelling is a grid: a regular collection of panels put into rows. It is sequential art distilled down to its essence, a series of sequential pictures that depict a story through time. Regular girds can be pretty interesting because of how they create a rigid, confining story space. But these comics, Spider-Woman and Southern Bastards both use artwork that use and subvert panel grids to create interesting and innovative comics. And I'd like to explore some cool examples.

There will be *SPOILERS* below for Spider-Woman #9 and Southern Bastards Vol. 3 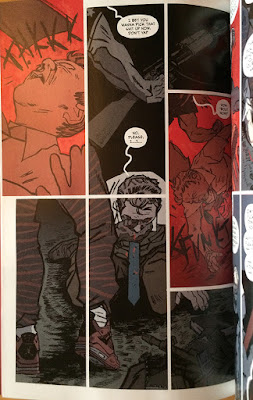 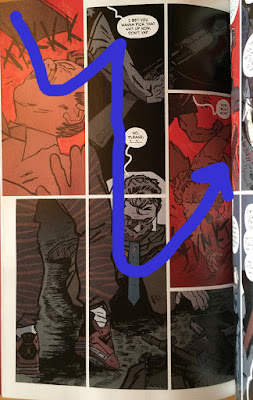 This page incorporates a grid and uses it in some very interesting ways. The foundation of this page is a six panel grid depicting a single image of a man on his knees being menaced. Because the six panel grid is here, the comic can violate the grid to generate extra emphasis. The first panel of the page, where the man is struck in the face with a gun butt, takes advantage of this and usurps the first panel in the gird, is RED!, and is enlarged so it overlaps the gutters. This makes the panel explode off the page in a burst of violence. Then the reader moves into the six panel grid with its single large image. This is important because it stretches the moment, making the main image feel like it takes six-comic-time units instead of one. The gridification of this image is also important because it splits the central of the page into a top and lower half. This means that when the reader encounters the text and character in the heart of the page, the kneeling man is constrained in the bottom middle panel below the horizontal divide. This makes him feel trapped, powerless, and cowed. It's a really smart use of the constricting aspects of a grid. Finally the final read panel, the red panel in the centre right, is jammed over the gird in a way that breaks the pattern. This makes this panel feel unexpected, impactful, and cruel as the depicted gut shot. This is a fantastic page. 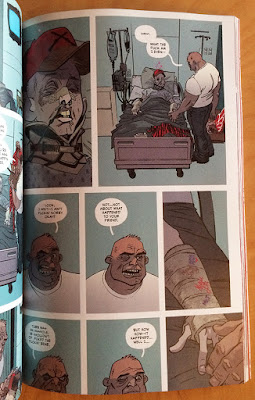 I'm also pretty impressed how this page uses its grid elements. While this page is not as strictly a regular panel grid, it does have four grid like panels in the bottom left corner. Here a henchman, partially responsible for beating the kid in the bed into a comma is trying to talk out his guilt. What I love here is how as the guy talks and talks and talks and trails off into inanity the lowest panels of the grid get cut off by the bottom of the page. It's the panels trailing off visually as the character trails off in the story. Which is great stuff. 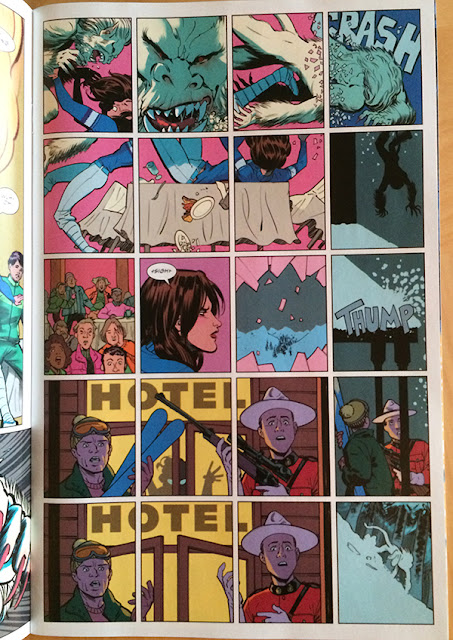 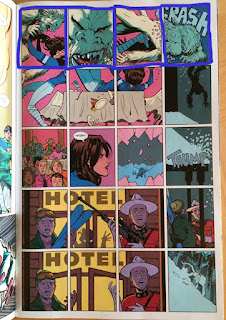 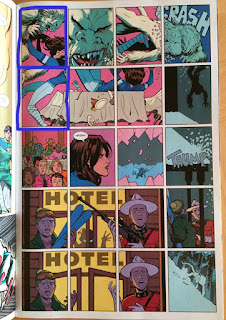 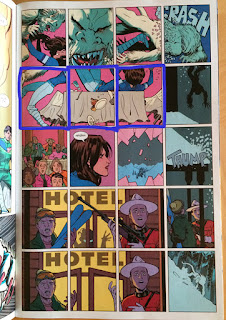 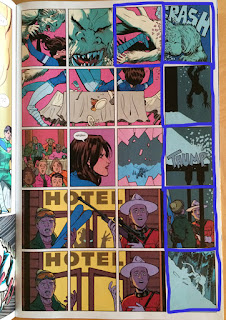 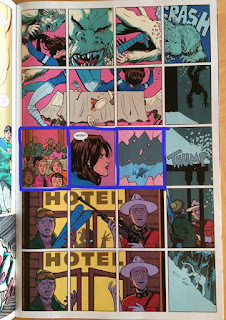 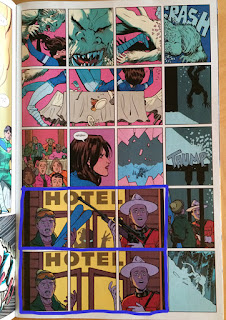 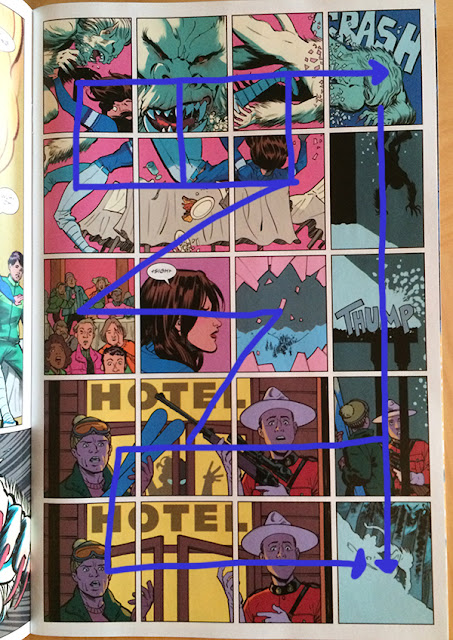 This page here also uses a grid in a spectacularly complicated way. Superficially this page is a regular twenty panel grid, where the story is played out in a linear, simple way. But this page is anything but simple or linear! Instead this page is more like a series of interlocking linear comic strips that are layered onto a grid to weave together three interlocking narratives. The top row of panels show Spider-Woman kicking a Wendigo out of a window. This top row carries around the corner and down the page showing a comic strip of the Wendigo falling, startling a Mountie, and fleeing into the beautiful Canadian wilderness. Meanwhile the first panel in the top row also leads smoothly into the second row of panels which present a slightly out of kilter replay of the top row of panels with a narrative focus on Spider-Woman. This creates a sense of chaos and flurry of activity over these first few moments, but also helps split the Wendigo and Spider-Woman narratives. Much of the third row of panels focuses on Spider-Woman seeing the Wendigo escape. The left corner of the page subverts the grid, and has two overlaid panels that show the startled Mountie and skier as Spider-Woman appears and steels their weapon and skis. Put all together the page shows a chaotic fight, the Wendigo escape, Spider-Woman pursue, and bystanders react in a way that shows simultaneous action in an easy reading way. This is a pretty incredible page.