Or a look at the very clever storytelling in Spider-Woman #3
by Dennis Hopeless, Javier Rodriguez, Alvaro Lopez, Rachelle Rosenburg, and Travis Lanham 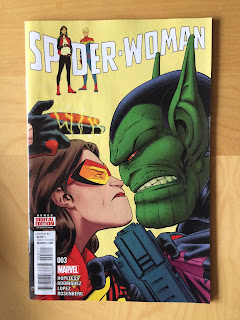 I know I write entirely too much about Spider-Woman. I was going to skip some issues, try and write about something else for a change, prove I still read other comics. But dang, Spider-Woman #3 does some interesting things that are really worth talking about.

So, I guess I'm writing another post about Spider-Woman.

There will be *SPOILERS* for Spider-Woman #3 below. 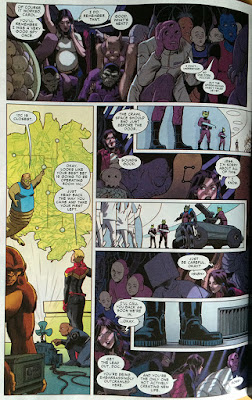 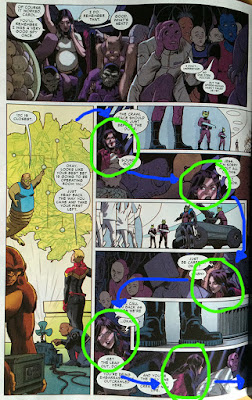 The thing that I love about Spider-Woman as a comic, both as a reader and an art wonk, is the clever way storytelling needs are incorporated into layout to create interesting, evocative sequences of comics. The above sequence, that has Spider-Woman and the other Space-Moms crawling through some sort of utility space, is a great example of this. The way the main storytelling panels on this page snake around and below setting panels instantly conveys the situation in a clear way. It also manages to capture the claustrophobia, the slow progress, and the dangerous proximity to the Skrull invaders in an effective way. It's a great storytelling solution that makes this page really fun to read. 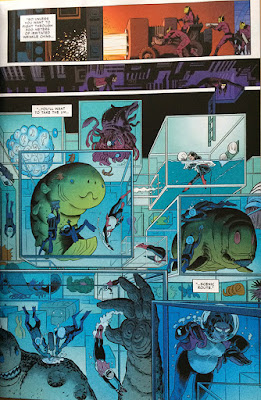 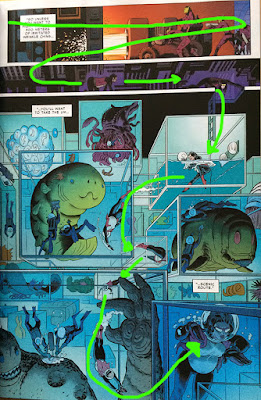 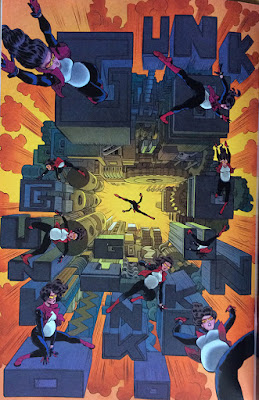 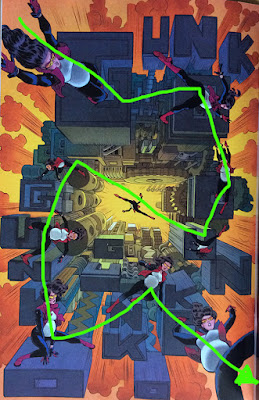 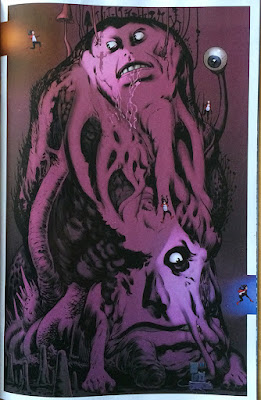 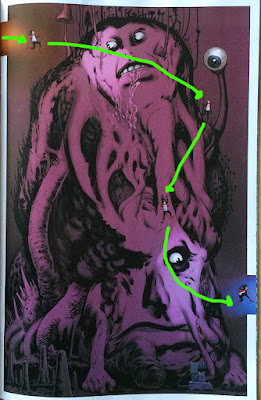 But it's this sequence here that is the reason I have to write about this comic. The story of the issue has a very pregnant Jessica Drew go on a quest through an alien-hopsital-space-station to retrieve help. This sequence showcases Spider-Woman navigating a bizarre labyrinth that involves swimming through an aquatic ward, some sort of elaborate mechanical room, and a lovecraftian giant alien thing on the way. What is great about this sequence is how clearly it manages to convey complex motions: despite moving in and out of the plane of the page, it is always very clear just where Jessica is going. This, I think, is due in part to character design. The heavy, black limbs of Spider-Woman's costume/outfit serve to exaggerate whatever shape Jessica's body is in, which allows the creative team to turn her silhouette into guiding tangent lines which can steer the readers attention. This is used to great effect throughout these pages. This sequence is also pretty great for just how weird the environments are: the aquatic ward is imaginative and fun; the machine room is chaotic, filled with odd geometries, and constructed of sound effects; and the monster room uses panel size and scale to create a yawning moment of oddity. This is great comics. 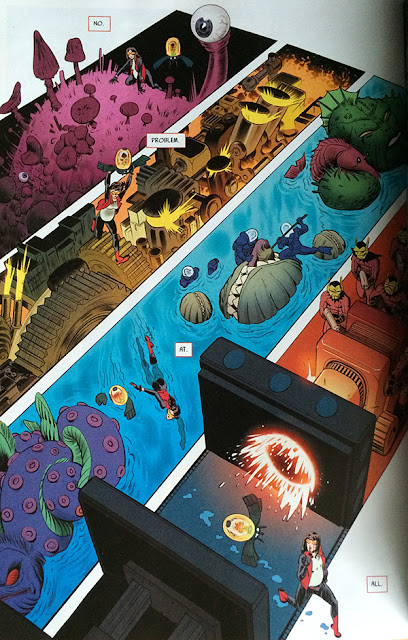 The thing that elevates this sequence from great to brilliant is this next bit. In the comic Spider-Woman navigates the alien maze, fetches the help she was looking for, and then must retrace her steps back to her point of origin. This is conveyed by having Jessica Drew run along the plane of the page across panels depicting the four zones she just finished navigating. Critically, each zone-panel has the core colour and design elements of the above sequence, so it is instantly obvious that Jessica is retracing her steps. I am also really impressed by the choice to have Jessica run along the surface of the page since it is just fourth-wall-breaking enough to be clearly a symbol representing her trip and not the literal depiction. It conveys the information of the retread in a way that hints at the larger, more difficult journey, but which also doesnt expend a lot of page space or force the reader to view recycled material. It is a gloriously smart bit of comics.

However you might feel about corporate comics or Spider-Woman as character or concept, this comic is worth reading.