Or a look at layout motif in Scarlet Witch #2
by James Robinson, Marco Rudy, and Cory Petit; Marvel Comics 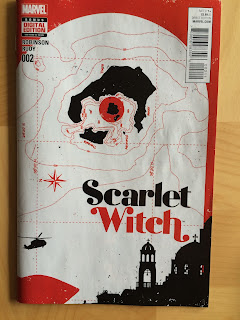 Scarlet Witch is a comic about a Marvel character who I have middling affinity for, but which is showcasing a rotating group of exciting artists, so I'm reading it anyway. The most recent issue features artwork by Marco Rudy who continues to combine his gorgeous painting with innovative comics layout to create really interesting pages of comics. And here are some of my favourite pages. 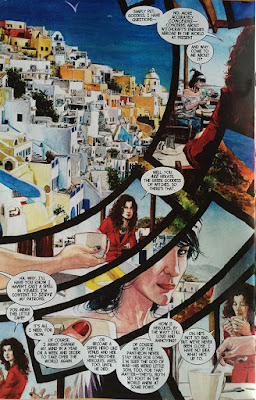 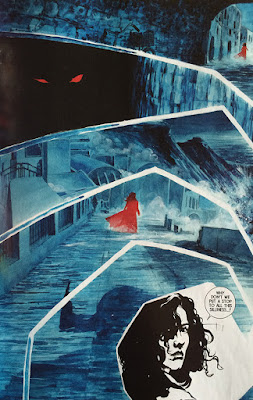 An aspect of Marco Rudy's comics that I really enjoy is how layout is used to build theme motifs into the page. On the left, Greecian-urn style interlocking panels carry the conversational aspects, which creates space to show the gorgeous hillside town,  but also helps give the artwork a foreign, Greek aspect to help establish a sense of place. Meanwhile, the pages featuring the Minotaur often feature twisting, labyrinthine panels that both tie the artwork to the idea of the monster and which also create a tortured, uncomfortable aspect to the page. When compared, the two layout are remarkably different and help differentiate sections of the comics to create distinct, emotionally charged moments. It's always remarkable how effective layout can be as a storytelling element. 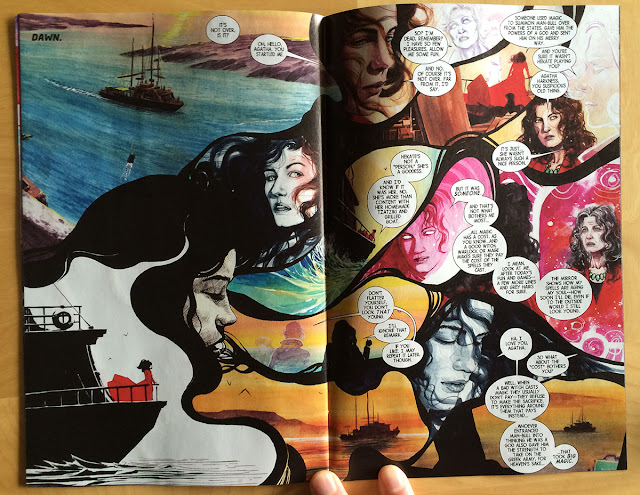 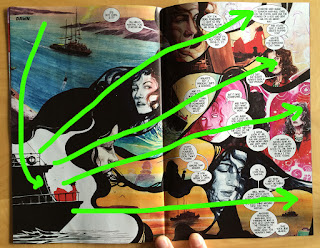 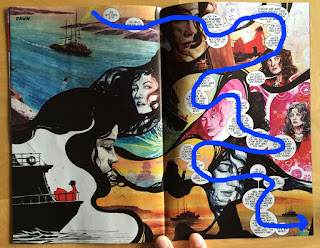 This is probably my favourite layout from the issue. For one, it is absolutely gorgeous from a pure picture-type perspective; there is something to be said about things just looking nice. This layout also does a great job catching the feeling of the moment: the fluid panels capture the sense of ocean waves and breezes and help build a tactile sense of place into the comic. The layout is also quite adept in that the wavey elements of the comic boil out of The Scarlet Witch's head, helping to convey that this  is a conversation occurring on a mental/mystical plane and not in the physical world. It is always pretty great when a layout encodes important narrative information into its fabric. This is just a really, remarkably nuanced sequence that is visually interesting and clear to read.

It is also a pretty interesting sequence of comics due to the very active role that lettering plays in increasing readability. The underlying artwork, to me, is somewhat open to reading multiple ways. To my eye, it generally originates in the lower left corner and vectors outward across the page in a sort of explosion of panels. Meanwhile the lettering provides a clear path from panel-to-panel through the fluid panels which keys the reader into a logical order. Taken together, you get the grand vistas of the page but also a roadmap for navigating it. It's great comics.