Or a look at the crowded, populated aesthetic of Multiple Warheads,
by Brandon Graham

One of my favourite pieces of culture as a kid were the Where's Waldo books. Not so much for the finding Waldo, because frankly, I sucked at finding that striped toque wearing tourist, but because these books provided teeming worlds to visit. Waldo and his narrative (such as it is) was just a tiny facet of these grand, chaotic environments full of a million other stories, from battling samurai to space aliens. And so the Waldo books ended up being more about all the cool or silly little side stories taking place in these awesome, riotous, packed environments than any quest for Waldo. Basically, I loved the books for their roles as gateways to worlds of stories than the books' central conceit.

(Also, speaking of Waldo, did anyone else see the guy cosplaying him during, I think, the Ivory Coast  -vs- Japan game?)

Anyway, I bring all of this up because Multiple Warheads has that same magic. It's central narratives of Sexica and Nikoli going on a roadtrip vacation and Nura the organ hunter on the trail of god organs take place in this amazing world filled with all kinds of bizarre, silly, and cool discursions and embellishments. Like my beloved childhood Waldo books, Multiple Warheads is a gateway to a world populated with hordes of fun characters and brimming with minutely detailed environments. And, like Waldo, I enjoyed the comic as much for the fun world it creates as the actual narrative.

There will be mild *SPOILERS* for Multiple Warheads below. 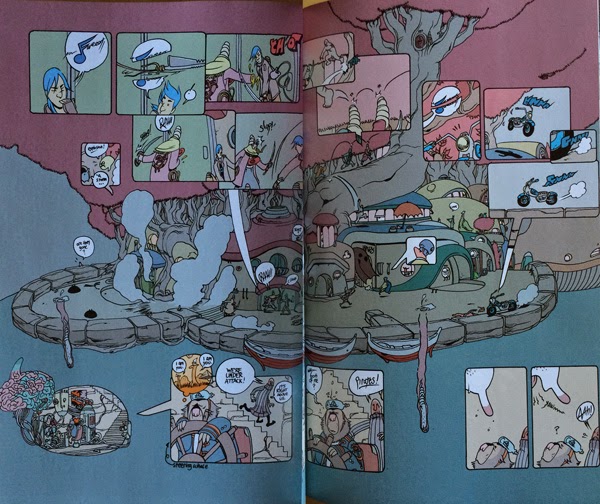 This double page spread here really encapsulates the big crazy world building of Multiple Warheads. This spread takes place during the Nura narrative, of the organ hunter searching for some particularly potent organs. Nura and her ally, the Coat-of-Arms guy have tracked Ian Marx, a person of interest in their organ hunt, to a small island community perched on the back of a flying whale. Once there the two hunters discover a summit of many clone (?) versions of Ian Marx (the Marx men) before being waylaid by sky pirate organ hunters, The Puzzlemen (who swap hearts with one another). This page captures the heat of the raid of The Puzzlemen on the floating whale village. And it is exactly why I think Multiple Warheads is such a great comic.

It is also just a really technically great spread of comics. These pages are absolutely loaded with environmental detail, 6 simultaneous narrative streams, and a handful of fun peripheral characters and details. And yet, for all this business, this double page spread is immanently readable and balanced. And how it's pulled off is worth taking a closer look at. 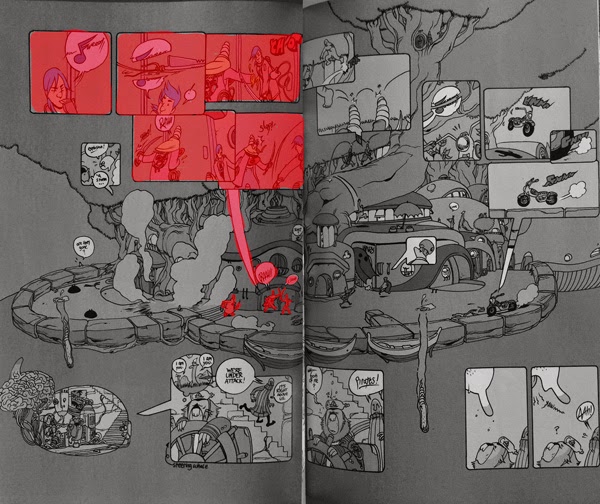 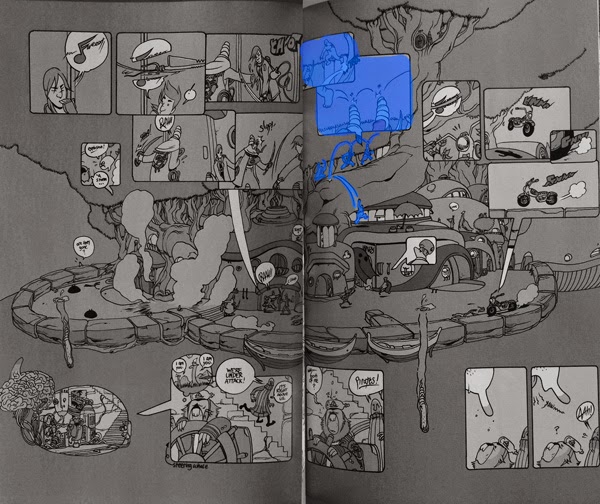 Stacked across the top of the spread are smaller panels that depict the protagonist's stories. Starting on the top left IN RED we have Nura fighting a Puzzlemen with a dialogue-box like pointer-arm showing where the action takes place in the larger environment. This way we get to see what's up with Nua but also how she fits into the larger world of the raid. Next to those panels,  IN BLUE, are panels depicting the naked Coat-of-Arms (fresh from an interrupted bath) acrobatically fighting more Puzzlemen right above the area where the action takes place. What's cool about this sequence is that the Coat-of-Arms action sequentially starts in the panels and ends in the larger environmental drawing. Like the background is the third panel in the story. 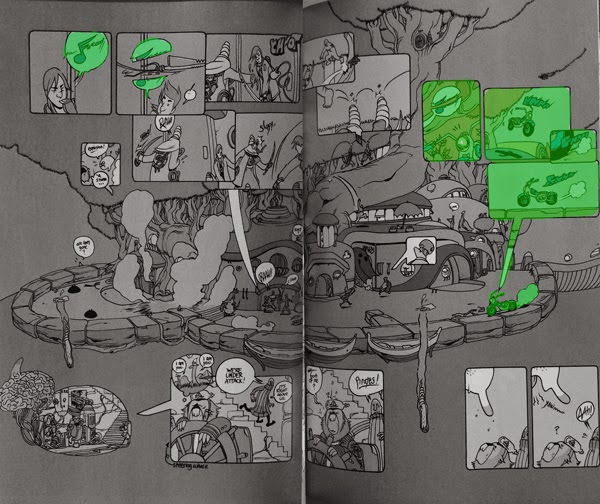 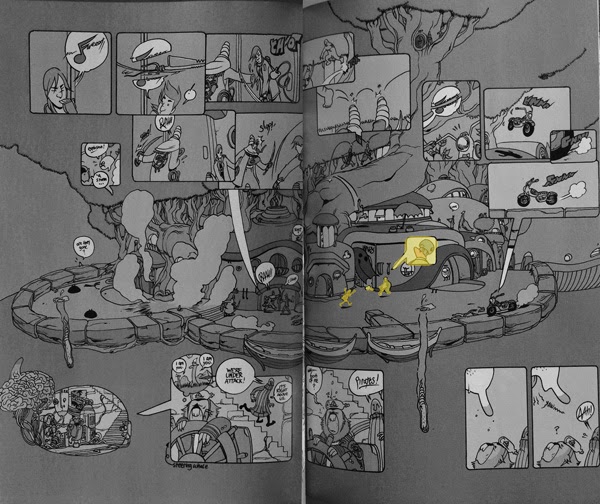 And then we have IN GREEN the panels depicting Nura's loyal motorcycle hearing the whistle (which we've already seen in the RED Nura panels) and springing to action to help her. We then work out way back and see IN YELLOW the Cyst Ant assistant of Coat-of-Arms guy carrying garments and fleeing from a marauding Puzzleman. 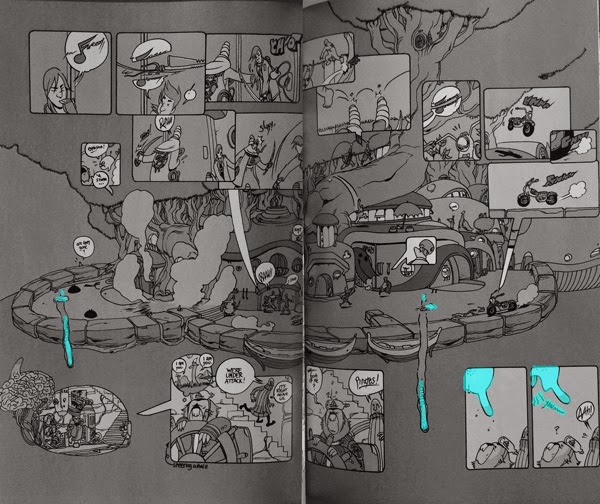 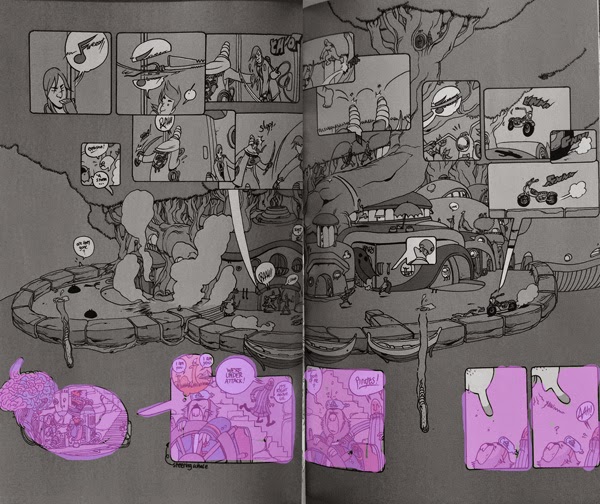 We then work our way down to the bottom of the spread and see IN TEAL the Bored to Death burrowing rodent torpedos of the Puzzlemen digging their way into the flesh of the flying whale to reach its sensitive internal organs. Below that we have panels IN PURPLE that take place in the nerve centre of the whale where the denizens of the village are able to pilot the flying whale. These two narratives come together right before an explosion that is depicted on the following page. And because Multiple Warheads is a comic depicting a cluttered world rather than just a focussed narrative, there are all over the periphery of the page IN ORANGE extra people and call outs which help increase the scope of the page.

So there you have it, a big chaotic world delivered in a really clear and interesting double page spread. You really ought to check out Multiple Warheads and visit its crazy world yourself.