Or why you should read American Gods and the Anansi Boys by Neil Gaiman
Neil Gaiman is something else. I haven't quite decided whether he is a highly talented flesh and blood man or  some kind of mythical spirit storytelling character from one of his stories. Regardless, dude has written some influential and important comics as well as some pretty great novels.These are two of my favourite.American Gods

In this novel Shadow, a freshly paroled convict with a dead wife, finds himself hired by an enigmatic Mr. Wednesday.Through this association Shadow gets embroiled in a conflict for the spiritual heart of america between the old gods, those belief driven entities dragged to the new world from the old, and the new gods, the technicolor electric deities invented by modern America. American Gods is a novel about belief and about stories and about the struggle between tradition and invention. It's a story old as time and as new as tomorrow and it is superbly written. It's also very Gaiman-y: beautiful and funny and empathetic but also melancholy and dark in that I'm-very-creative-and-deep-like-that way. I'd genuinely recommend this book to anyone.
The Anansi Boys. 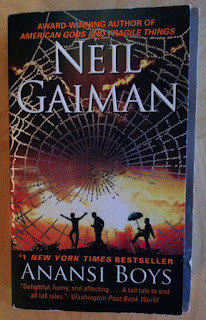 This novel spins out of American Gods and tells the story of Fat Charlie Nancy, the son of the old god Compe Anansi, the spider/storyteller/trickster god. The novel is mostly about what happens to Fat Charlie when he invites his Demi-god brother he never knew he had for a visit. Will Fat Charlie escape with his engagement, employment, and freedom intact or will he just straight up die of embarrassment? The Anansi Boys is a novel about stories and, specifically, how these narratives shape family identity. It's sumptuously written, an absolute meal of distinct and gorgeous prose. It's bombastic and hilarious and fun, but also creepy and suspenseful but no where near as serious and, well, gothy as American Gods. It's my favourite of these two very good novels and everyone should definitely give this one a try.
Posted by Michael Bround at 09:00