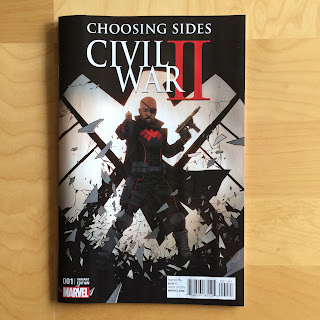 A thing I am always curious about is how much of a particular comics storytelling approach is driven by the writer in their script and how much are choices made by the illustrator. It clearly differs from creator to creator and from project to project, but it's always fun to see artists I admire write and draw comics. So when I heard Declan Shavley was writing and illustrating a comic in the Civil War II: Choosing Sides anthology I picked the comic up despite not caring at all about Civil War II, being generally opposed to tie-ins on principle, and having very little interest in the other stories (although the one with demon excavator was pleasant enough if very, very silly.) And it's a pretty well executed comic with some flashy storytelling that I'd like to pick apart. 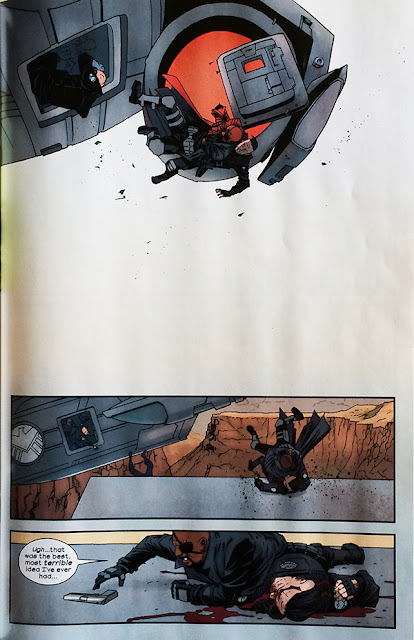 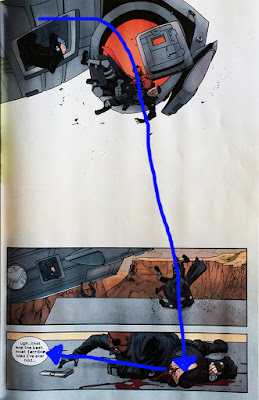 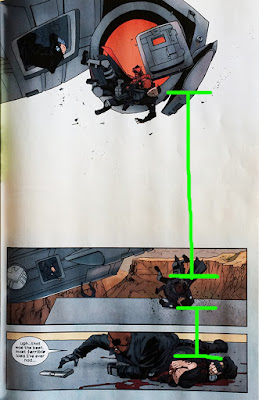 I really like how this fall sequence is constructed. The story of the scene is quite straightforward: Agent Fury jumps out of a flying transport taking an adversary with him, falls and lands on top of the adversary thus dispatching them. That said, the execution here, despite it's apparent simplicity involves many smart underlying choices. The first panel has the falling action start right from the top-left corner of the page, bringing the reader right into the fall. This maximizes the distance the fall can travel through the page and also gets the readers attention immediately. The action plays out along a very clear reading path that guides the readers eye cleanly down the fall, through the impact and into the dead adversary before following the motion of Fury crawling for his gun. This eye tracking is key to making the fall read and feel quick and kinetic. Another important aspect of the fall is how space is allotted. The distance between the first two images, the start of the fall and the first impact, is substantially larger than the distance between the second and final images. Since the reader is tracking through this sequence with a clean, quick pace this means that the final two images create the feeling of an abrupt stop. Put all together this creates a kinetic fall ending in a jarring, impactful stop. 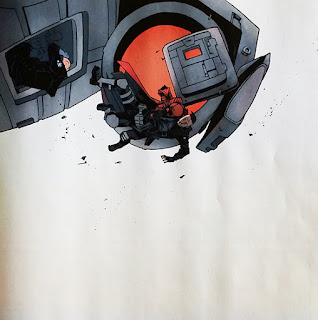 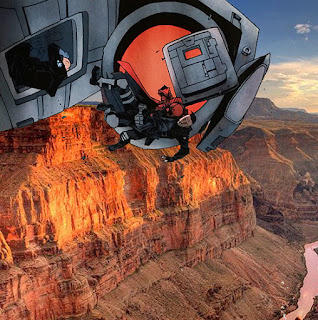 Another important aspect of this fall is a sense of height and the use of the blank background. I would argue that the first panel here has two key pieces of information to convey: that a fall is occurring and that it is from a significant height. The image of the fall satisfies this first storytelling requirement, and the huge white space satisfies the second. A large white space on the page feels very large, and having a large white space under the falling figures tells the reader the fall is happening from a great height. Including a background adds visual information that distracts from just conveying the idea of height. It's unnecessary visual noise that doesn't scream "there is a large space here" as clearly or dramatically as white space. So omitting the background, then, increases the efficiency and effectiveness of the storytelling in this panel. 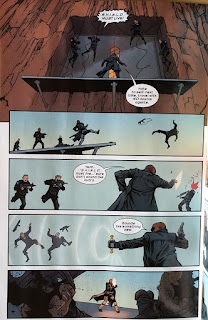 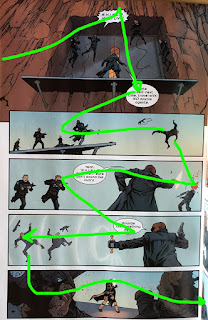 I also quite like this sequence here and how it uses horizontal space to create a visually interesting gun battle. Again the secret to making this page work is providing cues to push and pull the reader through the storyspace in the best possible way. The reader enters the page somewhere in the top-left and is drawn to the first speech bubble right at the top of the page. This sets the first panel up as a vertical storyspace where the reader has to look down, in the motion of the repellers, to take in Fury and the lower speech caption. This sells the feeling of the adversaries dropping into the panel and also conveys that the vertical direction is important for the following sequence. This is enhanced by the way the platform in the first panel hangs over the following panels, which really cements that this conflict is happening suspended on the side of a cliff. The reader then moves into the next panel in a right-to-left carriage return where they encounter Fury, highlighted by the colour and his active pose, and then follow the direction of his kick across the panel to the guy knocked off the platform.  This lends the kick a visceral sense of motion. The reader naturally wants to follow the arc of the kicked guy down, so they move into the third panel on the right side and immediately see a new adversary getting his head shot off. They move back to the left, see Fury whose arms create a guide line to steer the reader to the text box where they will notice the goons on the left. The reader moves down into the next panel, and if they are like me, they are immediately attracted to the speech balloon and the big black shape of Fury. The reader then moves left along the blast of the sonic-gun-thing and sees the two adversaries get blasted. The final panel is a simple left-to-right, but one where the colouring of Fury makes him the central, primary figure as he shoots the adversaries. It's a great, easy reading sequence that really constructs evocative, kinetic action. 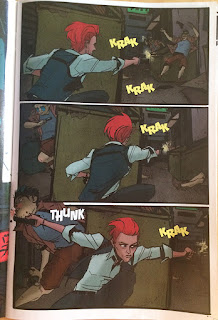 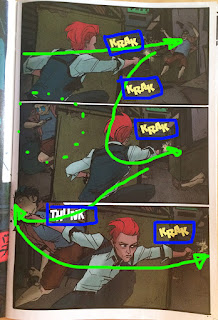 While we are talking about great gun battle sequences that utilize horizontal story space well, this sequence from Scarlet Witch #7 by James Robinson, Annie Wu, Muntsa Vicente, and Cory Petit, is also pretty great. This sequence does take advantage of eye guiding, in part by using shapes and actions like the above sequence, but it also relies heavily on sound effects to manage where readers look. The reader enters the page in the usual place where they immediately have the character, the Wu, positioned such that their arms pull the reader across the page towards the shot up goons. The yellow KRAK sound effects help pull the reader this way, and critically to this sequence, they work to keep the reader focused on the right side of the page as they move into the second panel. This is important because it deemphasizes the goon sneaking around the dumpster in the second panel so that the reader notices them peripherally. This makes the final panel where, with a THUNK to draw attention, the Wu belts the goon in the face surprising and impactful. (It's also great how this breaks the border of the panel for extra pain points.) The reader then moves along the outstretched arms of the Wu to the next KRAK and into the next page. It's another great gun battle that feels dynamic because of how it manages the readers focus.