Or a look at some of the great storytelling moments in Spider-Woman #8
by Dennis Hopeless, Javier Rodriguez, Alvaro Lopez, Travis Lanham; Marvel Comics 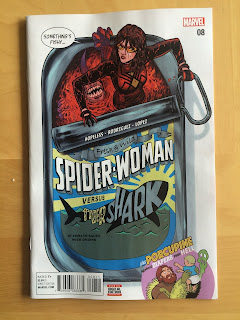 I write about Spider-Woman and the role of eye-guiding in composition more than I probably should. I fear it's starting to get boring and repetitive! But the thing is, Spider-Woman continues to showcase some really innovative compositions that use eye-guiding and colours to generate really clever storytelling. And I think some of it is worth talking about. So hopefully you can bear with me and we can unpack what's cool about Spider-Woman #8.

There will, as always, be *SPOILERS*. 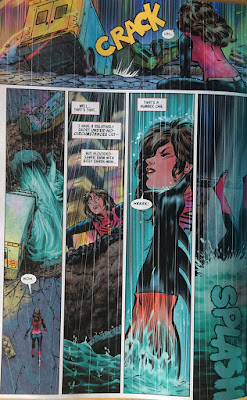 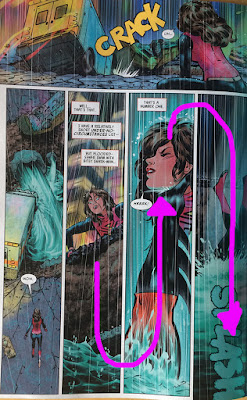 What I like about this sequence is what a nice, clear example of eye guiding composition it is. In the final three panels of the page the reader is drawn down, quickly up, and pulled back down again along the vectors of the motion. This sells the depicted action and creates a sense of drama to the moment. It's effective and works because of some really smart underlying storytelling.

This sequence is also nice in that it showcases a lot of basic elements that create the effect. The composition has narrow, tall panels that pull the storytelling into the vertical. The red, and particularly the black of Tiger Shark's gloves and Spider-Woman's pants and sleeves create tangent lines that steer the eye through the light/blue panels. Lettering is placed before and after motions so that you read narration, have the sudden appearance of Tiger Shark's arm, encounter more text, and then nothing until the cleverly oriented "SPLASH" onomatopoeia. This gives the panels a slow-fast-slow-fast rhythm which captures the arm-thrust, snag, capsize actions being depicted. Despite its apparent simplicity, this sequence is constructed of many storytelling elements working in concert. 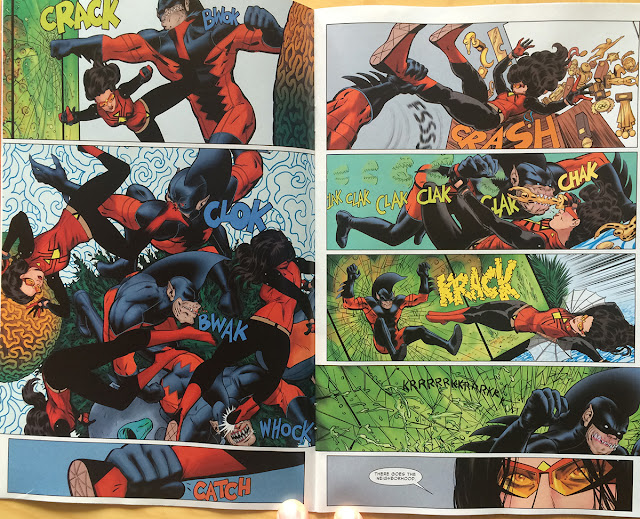 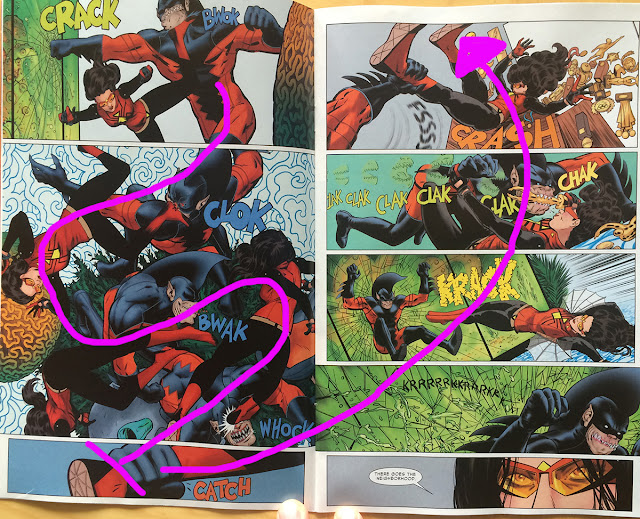 These pages are worth looking at for a couple separate reasons.

The first is that it has a very complex fight scene that reads very well and also takes advantage of black costume elements as eye-guides. I've previously discussed what a smart, smart character design Spider-Woman's costume is from a storytelling perspective. The crux of my argument is that the black limbs naturally stand out on a coloured page and can be used to steer readers and frame action. In the fight scene on the left page the first panel uses the central body stripe of Tiger Shark's costume to pull you into the large, central panel. This panel depicts a snarling, chaotic dogfight between characters that uses a combination of the combatants costumes to lead the reader through the visual noise. In particular Spider-Woman's black legs and arms play a key role in providing visual cues on where the reader is supposed to turn their eyes to navigate the page. It's worth noting that the colouring here plays a huge role in this effect since Spider-Woman's limbs are the only true, 100% black elements in the panel. The black elements in Tiger Shark's costume have received a treatment of highlights that make them blue/grey which lessons their visual weight and allows Spider-Woman's limbs to stand out more. It's a really adept intersection of composition and colour.

(I can't help but wonder how much this of this power move results from having a penciller/colourist working on Spider-Woman.)

This composition is also pretty interesting in how it uses the left-to-right page transition. The action being depicted here is Tiger Shark snagging Spider-Woman's ankle and swinging her bodily into what looks like a trophy rack. What is cool is this action starts on the bottom panel of the left page and finishes in the top panel of the right page. What this does is take advantage of the very long carriage return when switching pages to create the sensation of Spider-Woman being swung. This is a super clever choice because the reader's eyes swing along the longest axis of the page and get drawn into the final drawing of the motion. This creates a huge amount of momentum both from utilizing reading motion and for how the motion carries through multiple panels to create weight. It is great stuff. 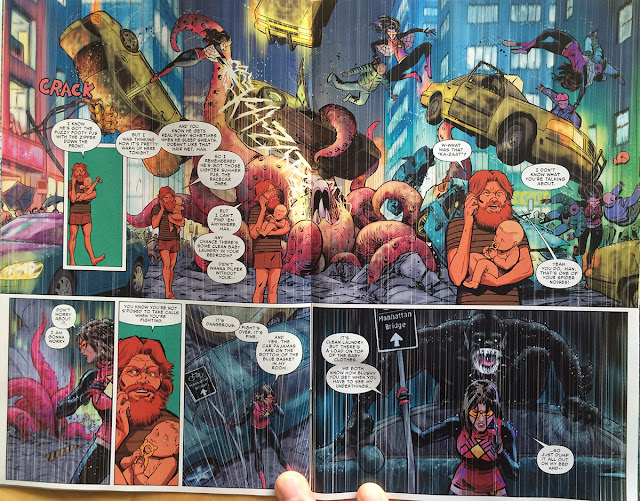 Another sequence that I think is worth taking a longer look at is the one where Spider-Woman has a conversation with her babysitter Roger. The concept of this sequence is that Roger calls Spider-Woman who is fighting Tiger Shark and giant squid monsters asking about random baby things. It's a fun section of the comic that uses the juxtaposition of trivial parental crap and titanic superheroics for yuks (and maybe to make a point about how parenting takes over your life). To make this juxtaposition work better Roger and baby are drawn over the superheroics in the same grand panel despite calling from another location. The aspect of this sequence that I think is worth paying attention to is how the colouring is used to distinguish that Roger-and-baby and Spider-Woman are in distinct from one another. This is accomplished by giving Roger-and-baby their own colouring: a flat, orange-tinged colouring with even lighting. This stands in contrast to the rest of the panel which is dark and shiny with rain, and is filled with highlights and shadows cast from a variety of light sources. The two colour palettes are so incompatible that it is immediately obvious that they are belong in different settings. Which is means that a colouring choice here is responsible for ket narrative information.